The Monkey Business of Real Estate

Chinese New Year conversations have never been so dry this year yet, on reflection, we realise that conversations since 2015 has largely been devoid of real estate talk which is a big difference from the years before where everyone was talking about those new condo launches, London, New York, and Australian units, commercial lots and our favourite Iskandar.

With even less to talk about when interest rates started rising last year, along with defaulting bonds, tipsy stock markets, topics started to veer towards the more mundane gossips, such as American politics which is pretty dangerous ground, after religion, and we are secretly thankful for topics like terrorism and new viruses to keep those conversations going.

Nobody likes to talk about unhappy things and many people I know have stopped looking at their portfolio statements after this new year’s meltdown in stocks and high yield bonds. Property investors, alike, are in their own despair as we hear of penthouses in Siglap renting at just 5.5k per month, down from the 10k it was fetching just the year before.

Couple the reduced rental with the higher expense of the highest interest rates we have seen in 7 years, the returns are miserable indeed.

Let’s be positive. If the house had been a bond, the effect of diminished returns would have driven the price down rather substantially especially if the rents will remain slumped. Yet, fortunately the URA Residential Property Price Index is just down 8.4% from its peak in 3Q2013 and anyone who had bought their property before 2011 would have profited in general, say nothing about the champions who had invested in 2Q2009 who would be still up an estimated 50%.

Yet unlike the faster paced equity and bond markets in their various states of correction out there, there is less light at the 2016 tunnel  for investors who are long real estate but not a bad place to be if you are out shopping for something out there, considering the potential correction just up ahead.

Rationalising the various losses in the marketplace, in the face of negative interest rates which is purported to be stimulative and not RETARDING, is real estate pain the next big pain to expect?

5 months ago we wrote about The Widow Maker In Real Estate where it feels bad to be a Singaporean who has 47% of their wealth tied up in real estate compared to Americans who only have 28% of theirs.

1. Economic slowdown or mini crisis (say Europe or China), banks downsize and since Singapore’s rental market is still specifically more leveraged to the financial sector (mass market homes less so, but there is a trickle down effect), if Orchard Road and CBD rentals collapse, Jurong will be affected.

2. Interest rate rise which looks probable after 5 years of near zero.

My question is this : How much will property price come off by for a 1% up move in interest rates ? This is entirely plausible because our mortgage rates are still about 1% and moving on to a 2% handle is not an impossible scenario. It will really start to burn when it hits 3% bringing about the dreaded margin calls on those loans that are leveraged to the hilt (= sub prime foreclosure scenario). Milder for Singapore because the property market has already corrected ahead of the rest by its 8.4% which is a combination of 1. Regulatory measures, 2. Higher interest rates (at their 7 year highs vs the negative rates elsewhere) and,  3. Supply pressures and lack of demand (immigration).

2016 will not be a good year for real estate even if the ABSD (Additional Buyer’s Stamp Duty) is removed because the peak launch year was 2012 and there are sellers waiting to sell to avoid paying the Seller’s Stamp Duty that is not applicable after 4 years. .. just when vacancy rates are climbing. 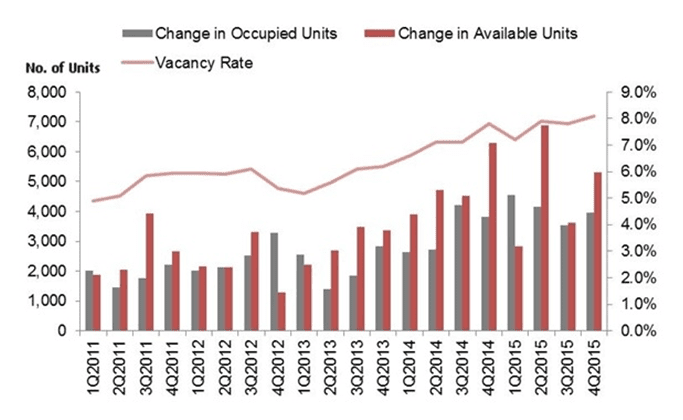 The demand picture from an investor’s perspective cannot look worse with wealth decimated en masse everywhere. John Mauldin put it plainly that oil prices alone have reduced the worth of all the world’s oil (estimated at 1,700 billion barrels) by $ 100 trillion although we should be grateful that not all that oil has been monetised or recognised on balance sheets.

Throw into the picture stock market losses such as the STI which is back to 2011 levels, the world can safely say that the central banks, who own most of the negative yielding bonds out there, are the only ones making any profits this year, albeit paper profits.

Interest rates around the world may be turning negative but it also serves as a low benchmark for property returns, closing an eye on lower rental yields i.e. lower rents and lower borrowing costs. Higher interest rates, the Singaporean anomaly, on the other hand would have a re-pricing effect for rental yields to justify asset (property) prices.

In Singapore’s case, the landlords are faced with a double whammy in a situation with over-supply as immigration slows to lead rents lower. Thus, requiring an even bigger adjustment to the asset (property) price?

There is always a bright side to the picture even if the weather is looking inclement in the early days of the Monkey year.

Negative funding is not unavailable to Singaporeans if they consider the Japanese yen and I thoroughly love it when they point out to me that the sharp rise in the yen against the SGD (5%) this year would have ruined many a mortgage for its foreign exchange losses because this means opportunity for those who are not funding in yen right now.

It is all monkey business to us and after our tips last year on how to DIY hedge your Sibor home loan (which has run its course and does not work for 2016), savvy investors are now rushing to lock in those yen loans against their SGD dollar assets.

While I am sorely tempted to encourage folks to do the same as we did last April to get “the most mileage on the investment via leverage and the currency of leverage”, the message today is to break down the risk for people who toying with the idea just to get ahead with those tempting negative interest rates.

Assuming nothing changes after 3 months, and SGDJPY remains at 81, we would be looking at profits of about SGD 4k for the forex deal and about SGD 3k for a loan of SGD 1 million.

What happens if the SGD weakens further against the JPY?

The JPY loan would turn in a loss on the foreign exchange as would the SGDJPY trade.

A carry trade is all about making that foreign exchange call.

This is where we stand on the SGDJPY weekly charts for the past 7 years and it is just supported by its 200 day moving average, a strong support nonetheless.

It could be as bad as trying to catch a falling knife in our desperation to beat the real estate blues or it could be supplementing that little income pool that we are trying so hard to preserve. And knowing a little more about foreign exchange trading could be the edge one would have for the monkey business of real estate in 2016.

Dining
The Real Diet of Chef Pepe Moncayo
Love
The Different Types of Love: Cheryl Lee & Stephanie Lee
Bonds
Can We Bring Back The 5 Year Singapore Government Bond Futures?
Travel
Spectacular Beaches To Visit This Summer
Dining
Our Top Picks for Eating Out in December 2019

The Monkey Business of Real Estate
By Ed Chan