Joseph Phua: Out of Love to Top of Dating Game 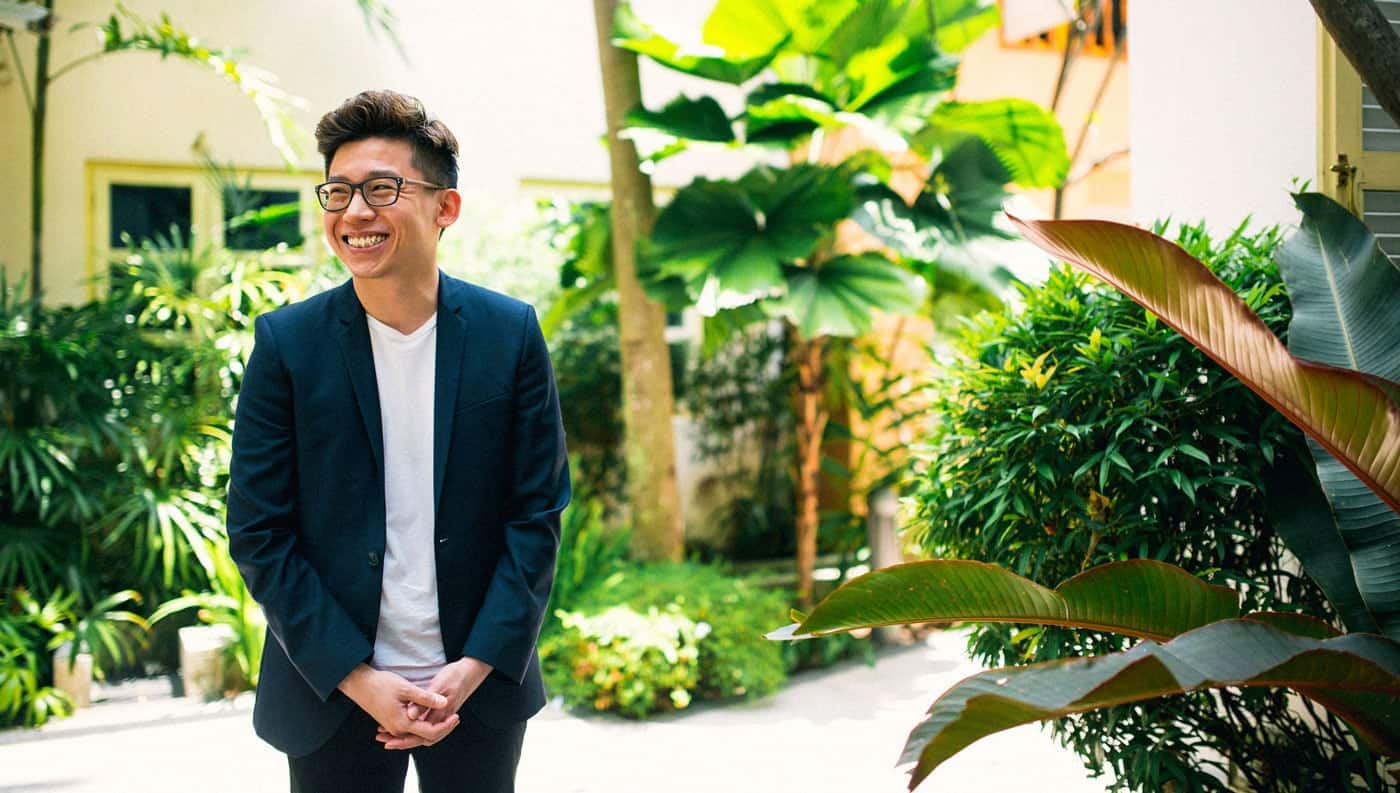 “Does life mirror swiping?” I ask Joseph Phua. “Yes, people make a decision about you within 5 seconds of meeting,” he tells me. “Many situations in life are like that – you only have one shot to make an impression.” Swiping is a superpower medieval people might have found useful when arranged marriages were the norm. Here we are, in the 21st century, with that superpower, casting people off the deep end with a thumb flick, for the simple crime of appearing before our eyes. As mobile interfaces go, the thumb is perhaps the most powerful appendage of all; the second, the charging cord. The act has even become an analogy for consigning subjects entirely unrelated to its original use, to oblivion, such as ‘the internet has swiped left on Kim Kardashian’, or “Are your subscribers swiping left?”

Rejecting potential suitors without the awkwardness, and without the other party knowing so, is a great convenience, as Paktor, which now has about 2.5 million users, proves. The popular application has captured one of the early leads in the region. On Paktor, you’re notified only when two parties ‘like’ each other, or respond to a message. I ask if a certain profile will never appear again if I swiped left on them. “We actually have a feature which allows you to convert all your dislikes into likes, and vice versa,” he explains. Sometimes, it seems, you do get another shot in life. As the local birth rate continues its descend, Paktor, colloquially named after the Hokkien term for ‘going on a date’, is in line with the government’s push for more babies, with the application playing the part of seeding the initial chemistry. “I don’t really like taking photos, and posing for things,” Joseph chirps, a general precaution that the ensuing photo-taking should not last too long. “I just like to work.”

YONG HUI YOW: Why did you launch a web version?

JOSEPH PHUA: We found that our usage spikes in the mornings and evenings, basically before and after work. This is because many people often cannot be on their mobile phones conveniently enough during the day, so we introduced the web version to capitalise on that. Our team uses Paktor while working.

YONG HUI: How is dating behaviour different in Singapore, as compared to Southeast Asia?

JOSEPH: Singaporeans are very exposed to the internet, and that makes them more open to new concepts, but they can also be very fickle. If they like what they see, they use it, if not, they leave. With dating apps however, western countries are more open because they have already been exposed to online dating for a long time, and as such, are readier to adopt such applications. When we first launched, we had to educate the market in this part of the world. But dating applications are nothing fundamentally new, so we focus very much on moving fast and executing well.

YONG HUI: Do you think that dating applications have altered people’s dating behaviour in any way?

JOSEPH: It depends what you mean by dating behaviour. Fundamentally, no, it hasn’t. I mean, if you’re talking about how a guy has 5 girls that he may like, and he runs through them in the order he likes them – that has been the case even before dating applications. People have always optimised for things – dating applications don’t change that.

YONG HUI: Just the process has been sped up.

JOSEPH: Yes. But I don’t think it has changed dating behaviour. For us, we replicate what people’s dating behaviours already are offline, to the virtual world. That’s why it has worked so well.

YONG HUI: Dating apps is a crowded space. What makes Paktor stand out?

JOSEPH: What do you think makes it stand out? Okay, I won’t make it difficult for you. [laughs] Firstly, it’s about the team. We have a solid team that can move quickly in tandem and react to changes in the market. It’s about how can you respond to 500,000 requests a minute, the efficiency of your infrastructure, speed, how good your product is. It’s about the whole system, and how it best serves your users. You need a very strong team to be able to do that. We were also the first in Singapore to capture this market, and that is a big advantage. You have to move very quickly, especially in technology.

YONG HUI YOW: What other names did you consider other than Paktor?

JOSEPH PHUA: I’m sure we did, but not too much thought went into the name actually. We just wanted a name that resonated well with people.

YONG HUI: What is GaiGai?

JOSEPH: It means wo men ju shang jie. [laughs] So GaiGai is our offline matchmaking service that focuses on events and dating services, including coaching. We realised that with our user base, and the data we have, we can effectively match people in the offline world, and provide more services for people looking for a partner. Traditionally, throughout history, two industries have been immune to economic swings. First is love, which include the match-making industry, and prostitution. And the second is the gambling industry – although in China, due to the implementation of government policies, Macau’s gaming revenues have been affected quite a bit. But in general, these two industries do well regardless of the general economic climate.

YONG HUI: Are there specific days where people use Paktor more?

JOSEPH: Everyone has times when they get lonely, especially if you’re single. For myself, when I was single, I got lonely too. It’s natural. During Valentine’s Day, we saw a 60 per cent spike in our usage, so you can say that there are certain times when people may be more interested to look for a partner, or times when they feel lonelier.

YONG HUI: How did you come up with the idea for Paktor?

JOSEPH: Back in Chicago, after my girlfriend of 8 years dumped me, I found it hard to walk into a club and get a girl’s number. It was hard for me to get back into the game. So I started Paktor to serve my own needs. I actually met my current girlfriend through the app!

YONG HUI: Do you still use the app?

JOSEPH: Yes, but for testing purposes only.

YONG HUI: What about rendezvous? Do you see that creeping into the application?

JOSEPH: Firstly, we don’t read your messages, so we don’t have data for that. We however do some textual analysis on them, but we delete them after that. We take user privacy very, very seriously.

JOSEPH: Also, there is nothing wrong with one night stands, don’t get me wrong. Everyone has a different personality and we are all wired differently. You may use it a certain way, and other people may use it another way. We don’t judge.

YONG HUI: What about yourself?

There are too many good-looking guys on Paktor – too much competition for me. I don’t get that kind of attention.

YONG HUI: Do girls recognise you on Paktor as the guy behind it?

JOSEPH: No man. There are too many good-looking guys on Paktor – too much competition for me. I don’t get that kind of attention. [laughs]

YONG HUI: How different is entrepreneurship as compared to your past life in consulting?

JOSEPH: There are overlaps, and areas which are new to me. In consulting, we are used to breaking down problems, and coming up with solutions. It is a very logical process, not unlike a start-up. Of course, programming is an even more logical process. Consulting has more to do with the business, finance and operations sides, but when you are a business owner, you have to deal with a lot more than just those, so there were a lot of things I had to learn. For example, at the start, I knew nothing about mobile, so I just had to pick it up, read books and so on.

YONG HUI: What have you learned from hiring?

YONG HUI: I’m sure you must have had acquisition offers with the traction you have.

JOSEPH: Yes, we have had offers, and quite substantial amounts too, but we think we can build a company here. We don’t want to short-change ourselves.

YONG HUI: What was the culture that you wanted for Paktor?

JOSEPH: At the beginning, when we just started out, it was just the 3 of us. We would work, go to the hawker centre to eat, and then come back to work again. There was no culture to speak of, just work. The culture was just our personalities. Culture is this invisible thing – you can feel it but you can’t see it. You can set guidelines and rules so that people know what to do under what circumstances; it’s something which you have to mould over time. You start to really think about culture when other people start to do the hiring for you. That’s when culture starts to get out of your control, when you start to get bigger. For us, even if we grow a lot faster, I always tell my team, we are still a small company. We are really focused on being efficient, serving our users, and having fun.

YONG HUI: Did you face objections from your parents when you wanted to start Paktor?

JOSEPH: It’s funny you mentioned that, because no one in my family works for someone else, so it wasn’t that difficult for them to understand. My mum, since the 1970s, sold pots and pans door-to-door. My mum is a lot more entrepreneurial than me, in fact. I wanted to work actually, and go on my own career path. My sister also has her own venture. She started an online store selling organic food after she left banking.

Having a family business can be a great, wonderful thing, but it can also be a curse.

YONG HUI: Would you say starting your own business was inevitable?

JOSEPH: No, definitely not. I stumbled upon the idea, and went for it. I wanted to get away from the family business actually. Having a family business can be a great, wonderful thing, but it can also be a curse. In a family business context, there are a lot of things you have to learn, but only because it’s your family’s business, so there’s the pressure to do that, expectations to fulfil. But I did spend time with the family business before I left for Chicago to do my MBA.

YONG HUI: What are your user numbers?

JOSEPH: We have about 2 and a half million users in the countries we’re in right now.

YONG HUI: What about user numbers in Singapore?

YONG HUI: Are there any pick-up lines that work best on Paktor you think?

JOSEPH: I don’t think there is a best pick-up line on Paktor per se. I think sincerity matters, being honest matters, but everyone is different, and we all respond to different stimuli. I think it’s important to be yourself, and it will come across to the other party. For us, being authentic matters, that’s why we want people to use their real identities.

YONG HUI: Do you know of any matches on Paktor that have resulted in marriage?

JOSEPH: I don’t think people would tell you they’d met their spouse on Paktor. Some might have. But we do get many emails thanking us that they found their dates on Paktor.

YONG HUI: What are your revenue numbers?

JOSEPH: We are making money, but we are not in the monetisation stage yet. What we are focused on now is user acquisition, and ensuring that we capture the markets we are in. We have the mandate from our investors to do that – to grow our user numbers first.

YONG HUI: How will dating evolve in the future?

JOSEPH: It will definitely evolve for sure, but I can’t really say because then our competitors would get there first.