Interview with Dione Song: What It’s Like to Work at Love, Bonito 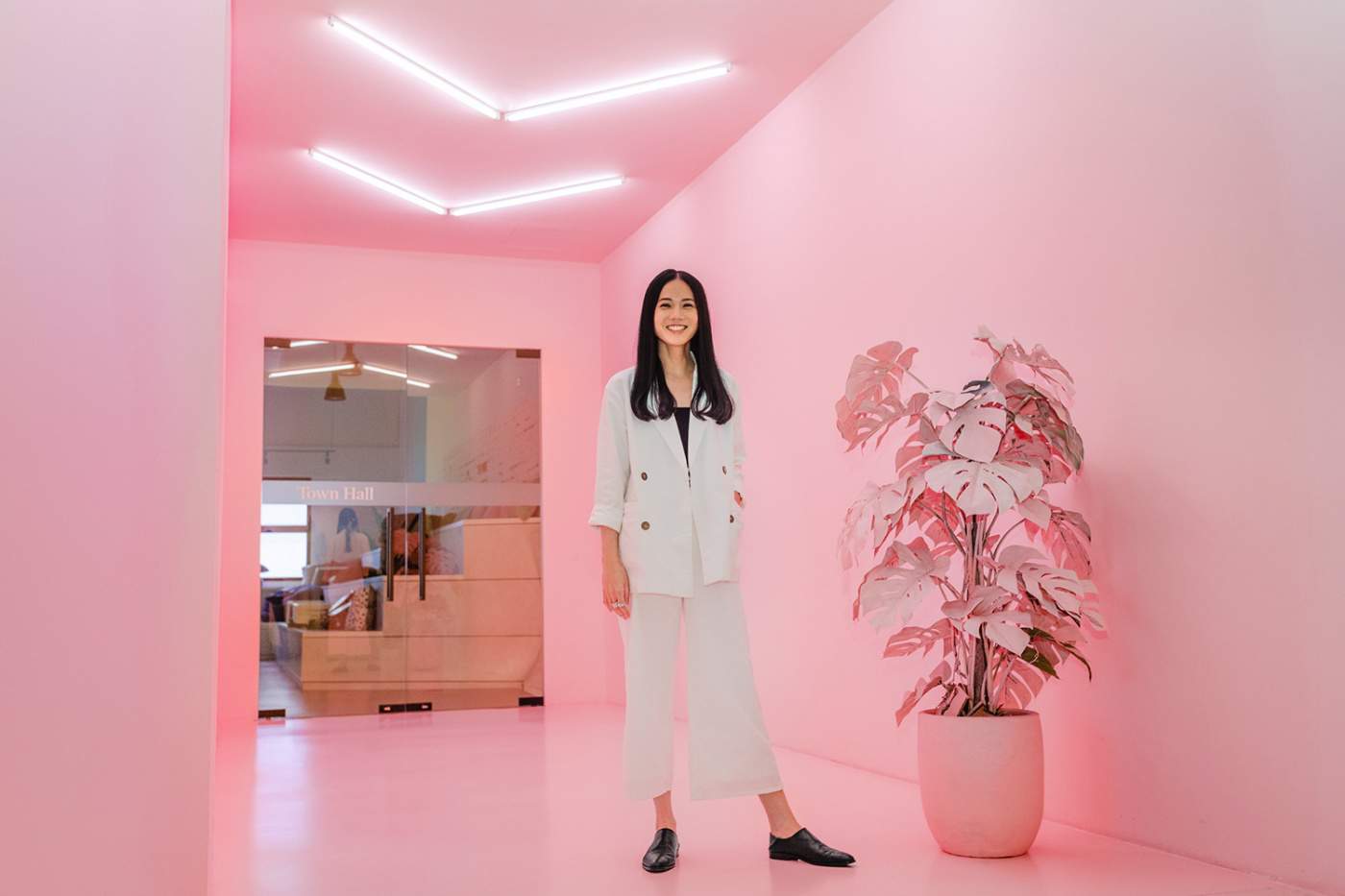 I feel like I’ve stumbled into a portal. Tucked away on the third floor of the Eu Yan Sang building—a bizarre choice for the headquarters of a women’s wear company, a hobbit-sized 1m doorway leads to the office of Love, Bonito. And inside is nothing short of pink-drenched goodness. Contrary to what you may think, it isn’t a kitschy kind of landscape, but a wholly inviting one.

A living room-style foyer is the first thing that greets you. Complete with a rustic bicycle, artificial plants spray-painted in the shade of blush, a rug, coffee table and couch, this hygge-fied space puts you immediately at ease. Despite its homely appearance, it retains a fashion-forward character that’s distinctly “Love, Bonito”.

Taking time out amidst a crazy schedule of travelling to oversee Love, Bonito’s latest expansion into Hong Kong, chief commercial officer Dione Song walks me through the lay of the land. It’s been a non-stop hustle for everyone, with the recent unveiling of the brand’s third and largest outlet at the new Funan mall, and a little office makeover.

From a cold, characterless workspace, its headquarters has been spruced up to serve its employees more efficiently and in style. Not to be brushed off as a surface act of vanity, the revamp centres on the needs of the staff, ascertained through a company-wide poll. It resulted in the introduction of a nursing room, at the behest of the growing number of new mothers, and meeting rooms of various sizes, which are named by the employees after fabrics like linen, jacquard, and knit.

Another fresh feature is the Town Hall, an airy communal space that sits at the end of the walkway by the foyer. The most versatile of the bunch, it resembles a mini atrium with giant steps lining the walls that double as storage units and seating areas, piled generously with cushions and bean bags. The main floor is configured with an open-plan design, where the departments aren’t segregated.

Hidden at the back of the office is the studio, littered with miscellaneous objects and racks of clothing, where all the photo shoots take place. Between the entrance and the work area, the pantry (stocked like a mama shop with all kinds of snacks) features a mural wall of quirky, abstract shapes in primary hues. The work of Singapore female artist Sam Ho, it lends a personal touch of inspiration, in line with the contemporary-chic style of the ideal Love, Bonito woman.

It isn’t an easy feat, but in just a few years, the 180-strong regional brand has managed to shed its former blogshop image and build a reputation that embodies quality and individuality, rivalling international names such as Zara and H&M. Along with this external shift is an internal one, which saw the growth and development of its company culture.

Dione, who joined the organisation about two years ago, around the same time it launched its physical retail stores, says, “Things have changed a lot in the last couple of years in a good way. In the past, especially for tech and data roles, we still had to do a lot of selling with candidates. Thankfully, today, we have quite a bit of organic interest through our career portal and LinkedIn.”

If there’s one word to describe its culture, it’s collaborative. “Everyone is working towards the same collective goal, which is to be the most thoughtful brand for the modern Asian woman” she adds. Crucial to achieving that is working and communicating with the different departments. As a “hierarchical-less” company, the relationships between senior managers and the junior staff are relatively casual and laid-back.

Employees are also free to take charge of projects, instead of being coddled and spoon-fed. “Even if we know there’s a certain answer, we try to let people explore and arrive at the answer on their own. We’re not going to lay it all out, and tell them what needs to be done, which may be the more traditional method. Rather, we allow employees to determine the action plan to reach the greater goal.”

At the heart of a collaborative culture is the people. And there’s no way good work can come out of teams if they don’t get along with each other. To foster a healthy “work hard, play hard” environment, a lot of effort has been put into organising group activities such as eating competitions, birthday celebrations, weekly in-house #ToneUpThursdays workouts and screenings of Game of Thrones at the Town Hall. Recreational events take place every two to four weeks, and that’s not including major festivities such as Halloween (where employees come in full costumes), Chinese New Year (with quizzes and a steamboat party) and Mother’s Day (where the mothers in the office share about their experiences).

Employees are also surveyed anonymously every quarter on how they feel about work, even the environment of the office. A twice-yearly performance review allows employees to talk about whether they feel fulfilled in their roles, or whether a department shift is necessary. Retail associates aren’t relegated to the sidelines either, but have the freedom to roll out new initiatives or travel to regional outlets to train up new teams.

As a non-traditional company, flexi-work arrangements can be negotiated as well, according to the specific needs of the employee. Dione explains, “We’re quite flexible when it comes to remote working. If you want to do your work from home or need some quiet time, it’s fine. If you work late the night before, it’s understandable for you to come late the day after. You don’t have to physically be in the office all the time. You just have to work out an understanding with your manager.”

To minimise any office politics, it’s vital to hire the cream of the crop, candidates who not only possess the right technical skills, but also display emotional intelligence. It’s why Love, Bonito employs a five-round interview process, which typically lasts two days. It begins with an informal chat with HR to suss out the “why” and any red flags. The candidate is then given an assessment (for instance, a writing test, coding assignment or IQ-type quiz), before moving on to the second interview with the direct hiring manager.

Then comes an interview with the candidate’s direct teammates, and a peer round with people you’ll commonly work with outside your department. This is where your EQ and your ability to engage the entire room is tested. Dione explains, “Everyone in the team would have met the newcomer by hook or crook. If someone couldn’t make it, they’ll be slotted into another round to meet the person.”

The final interview with the management is where you’ll be asked questions about your strengths and weaknesses, and the biggest mistake you’ve made in your career, which tests one’s self-awareness and humility. At the end of the day, the biggest challenge is finding employees who believe in and resonate with Love, Bonito’s five core values: 1. People Matter 2. Go Above & Beyond 3. Be Bold, Be Creative 4. Always Keep It Real 5. We’re Better Together. “It can’t just be slapped on a wall. It’s about practising it and setting an example,” says Dione.

Love, Bonito works like a family as well. Much of the employees’ strong sense of belonging is thanks to its inclusive culture, starting from the moment you set foot into the company. “All new joiners have to do a two-day experiential onboarding (an initiative that began in 2018),” Dione shares. “Everyone, even if you’re an 18-year-old intern, will get to understand what’s happening at Love, Bonito.”

“The first day will be in the office, where they will hear from Rachel personally on how Love, Bonito started and how it has evolved over the years. After a meet and greet with management, the different departments will proceed to share the mission, culture, respective team objectives, road map and plans for the year. Then, we do some icebreakers, fun and games. For the second day, we’ll do half a day in the warehouse, where everyone experiences and understands how e-commerce works, and the second half of the day in the retail store to understand the other side of the business, which is the offline retail expansion. That’s important because it enables everyone in the office to develop empathy and an understanding of what happens in stores, which helps build bonds.”

It’s something of an orientation camp. Not only will you get acquainted with the existing staff and fellow newcomers, but also get a good glimpse of the company’s goals and how they’ll serve that bigger dream. “It’s what we call the intense first 30 days, which are important in ensuring that we set a new joiner up for success the moment they set foot into the company,” says Dione.

With 15 stores across the region at present, Love, Bonito is no doubt heading towards the right direction, continuing to break new ground as a homegrown brand, both externally and internally. Not some portal into a utopian wonderland that thrives on style over substance, but a real launchpad for a burgeoning fashion brand poised for world domination, this mission-first company is a sign of the future, a picture of a rapidly growing label in the 21st century.

Invest
Insights
A Look at Singapore’s HENRY (High Earners, Not Rich Yet) Generation
Invest
Insights
How To Get Rich In Singapore?
Invest
Insights
The Triple Whammy of AAA Singapore’s Monetary Policy
Interview with Dione Song: What It’s Like to Work at Love, Bonito
Text by Angela Low; Photography by Yew Jia Jun
© 2023 High Net Worth All rights reserved.
Privacy Policy | Terms of Service