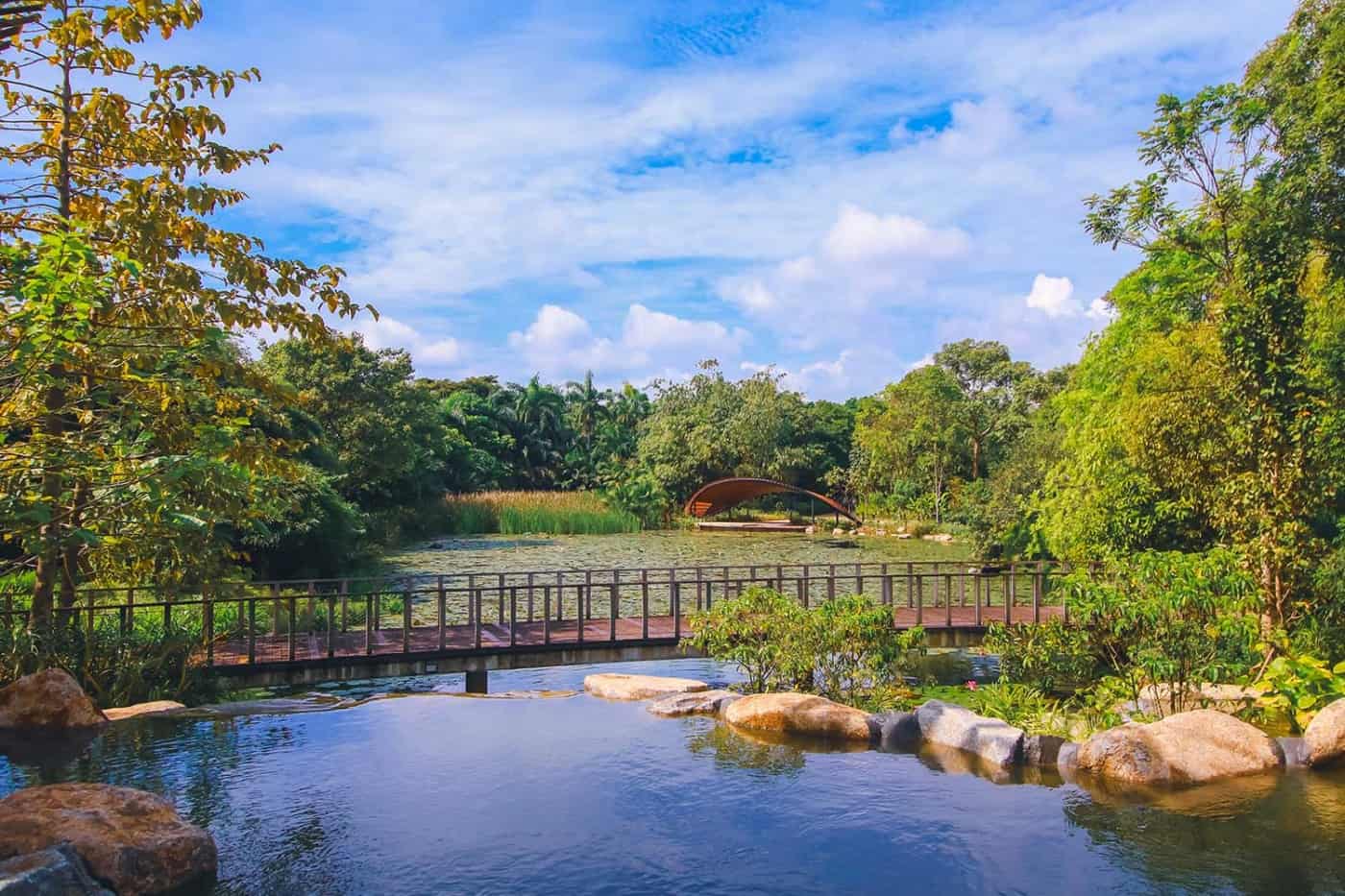 Kikkoman Singapore, the local manufacturing facility of Japan-based soy sauce manufacturer Kikkoman Corporation, has announced a S$0.5 million sponsorship for the development of the Kingfisher Wetlands, a new nature sanctuary at Gardens by the Bay. This sponsorship serves to commemorate Kikkoman’s 35 years of friendship with Singapore.

Kingfisher Wetlands is situated along the waterfront promenade of Gardens by the Bay, next to the popular Satay by the Bay and near the upcoming Gardens by the Bay MRT station. The 15,000 sq m nature sanctuary—slightly bigger than the size of two football pitches—features more than 200 native true mangrove trees and mangrove associates planted amidst newly-created water cascades and streamlets, as well as a wildlife lookout that bird-watchers and nature photographers will enjoy. There is also educational signage to allow visitors to gain a greater understanding of frequently-spotted wildlife in the area.

The Covid-19 pandemic has seen more people looking to nature for respite and recreation. This growing interest in nature is reflected in the visitorship to Gardens by the Bay, which has welcomed more than 10 million visitors since the circuit breaker in April 2020.

The development of Kingfisher Wetlands is part of continuous efforts to enhance and enrich the Gardens and to provide the public with new nature-rich areas to explore.

While the original site was a popular bird-watching spot for many in the Singapore birding community and also frequented by nature photographers, it was isolated and often missed by the general public. With the donation from Kikkoman, the development works for Kingfisher Wetlands segued the existing area with the surrounding landscape, making it more accessible to visitors.

As one of the rare wetland areas located right in the city centre, it is hoped that Kingfisher Wetlands will enable more people to get up close to nature and nurture an appreciation for the diversity of flora and fauna in Singapore.

Over the years, the site has come to host a diversity of wildlife, including the Smooth-Coated Otter, Lesser Whistling Duck and Malayan Monitor Lizard. The bird monitoring programme of Gardens by the Bay has also recorded over 130 species of birds—almost one-third of the bird species found in Singapore—and 16 out of 40 migratory species spotted in Singapore are known to visit this area.

To enhance the habitats to create Kingfisher Wetlands, work was done to connect the site’s two existing waterbodies, Lotus Pond and Kingfisher Lake. New water cascades and streamlets were established to improve water circulation and aeration, and to create new microhabitats for biodiversity to flourish.

With the planting of native and endangered species of true mangroves and mangrove associates—including native, critically endangered species such as the Firefly Mangrove (Sonneratia caseolaris) and Upriver Orange Mangrove (Bruguiera sexangula)—Kingfisher Wetlands is also making a contribution to the environment in terms of carbon sequestration and storage.

By taking in carbon, mangroves are a natural way of reducing the amount of greenhouse gases in the atmosphere. Mangroves are known to be able to sequester more carbon than rainforests, with most of this carbon stored in the soil beneath these trees. This is what is known as “blue” carbon—the carbon captured by ocean and coastal ecosystems.

As part of the groundwork to develop Kingfisher Wetlands, initial surveys of the soil carbon content were carried out in some of the waterbodies in Gardens by the Bay. The results showed that although these were reclaimed ecosystems, they are functioning very well, on a scale similar to some of Singapore’s natural coastal systems such as mangrove and seagrass habitats. Such findings are promising, and suggest the potential of urban eco-systems like the Kingfisher Wetlands to store carbon in the long term.

Osamu Mogi, Director and Senior Executive Corporate Officer of Kikkoman Corporation, said: “In the Gardens, water run-off is captured by the lake system and cleansed by aquatic plants before being discharged into the reservoir. These plants play an important role in providing clean water. Water is also crucial in what we, Kikkoman, do in our business. We have always produced soy sauce using water of the highest quality. And so, we recognise how essential water is, and it is with great pleasure that we make this donation to Gardens by the Bay.”

Elaborating on the reason for the sponsorship, Mogi said that Kikkoman strives to uphold its philosophy of maintaining harmony with the environment. Supporting the development of Kingfisher Wetlands is aligned with Kikkoman’s corporate social responsibility policy, which upholds values such as improving society and protecting the environment and water.

Felix Loh, CEO of Gardens by the Bay, said: “We are grateful to Kikkoman for their generous contribution to a shared vision of promoting greater biodiversity and sustainability in Singapore, and making nature-based recreation accessible to the public. We hope the new Kingfisher Wetlands, developed along the popular Round Island cycling Route, will raise awareness among the local community to cherish the richness of wildlife that can be found in the heart of the city.”

In November 2010, Kikkoman marked its 25th Anniversary celebrations in Singapore by donating S$1 million to the Garden City Fund for the development of Kingfisher Lake and in 2015, it made a $0.5 million contribution to the development of the Sungei Buloh Wetlands Mangrove Arboretum.

Invest
Insights
A Look at Singapore’s HENRY (High Earners, Not Rich Yet) Generation
Invest
Insights
How To Get Rich In Singapore?
Invest
Insights
The Triple Whammy of AAA Singapore’s Monetary Policy
Kikkoman Donates S$500K to Develop New Nature Sanctuary at Gardens by the Bay
© 2023 High Net Worth All rights reserved.
Privacy Policy | Terms of Service