Let’s Spare a Thought for the Sandwich Generation 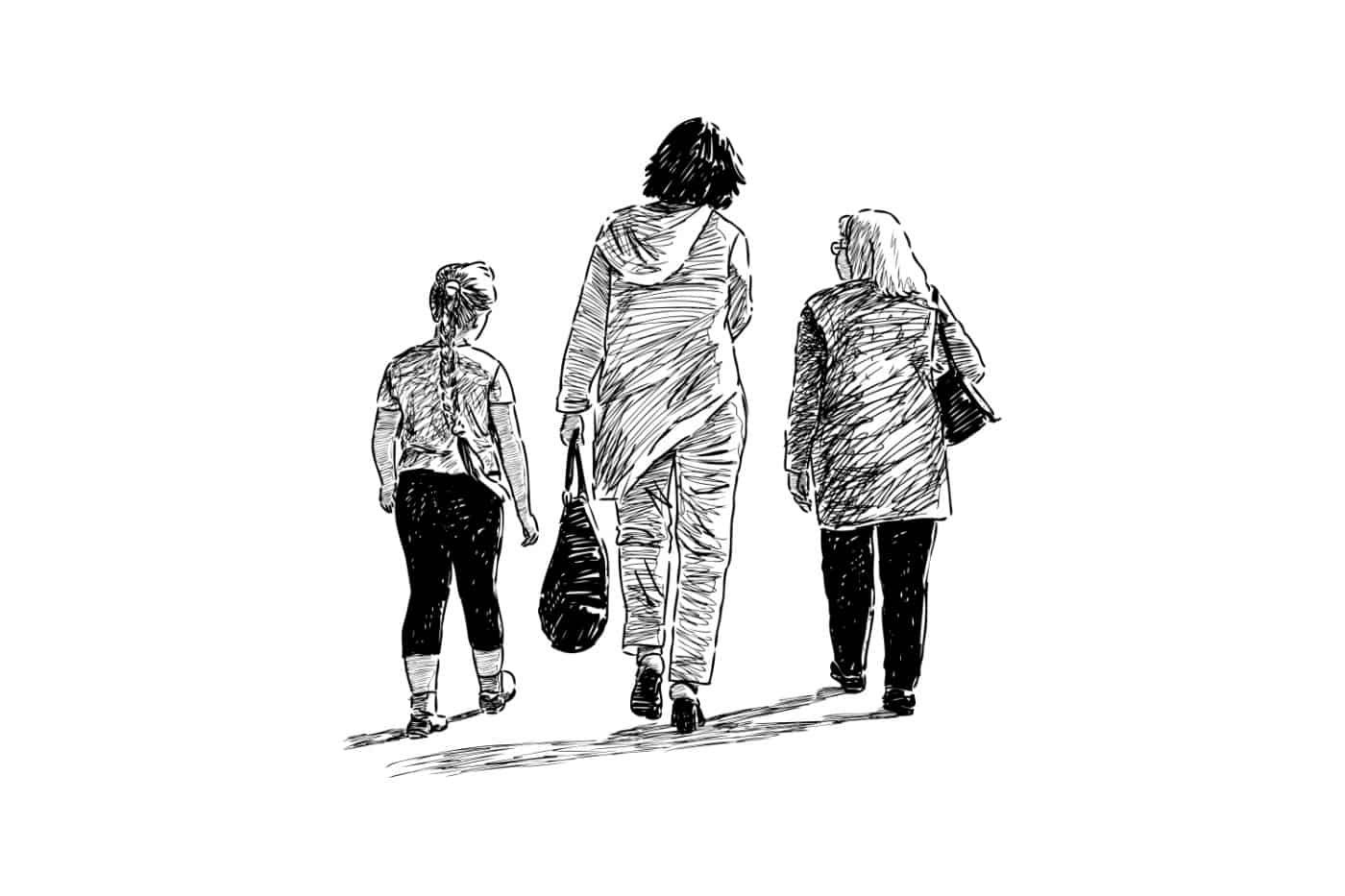 How do you motivate a sulky 19-year-old on a Sunday night during a long and dreary drive to the ends of Singapore—i.e. Lim Chu Kang? It is just a drag on the mother’s soul especially when the kid glumly informs you that two mates will be taking MC for the week after seven out of 25 kids did the same just about a fortnight ago. Then you discover that a friend had fetched his son for that MC (instead of camp) that very night. Please stop it, Gen X is screwing up Gen Z!

That was how a dear friend described her Sunday night experience, which hardly sounds like a problem compared to the problems many of our peers are facing. We hear of yet another fellow Gen X-er who got the “pink slip” in the past week, as banks free up space to hire the fresh graduates that they have committed to do. In fact, it was not a “pink slip” per se, because banks have also committed not to retrench. Thus it was voluntary “retirement,” as they all have been in the past years for all the PMETs we have been reading about in the news—in particular, the Gen X-ers and late boomers out there.

That is the life our peers have come to expect, as one described in his contract role where he was “asked nicely” to double-hat for a job he was an expert at, but would have to eventually relinquish it to a younger permanent hire and teach the fellow everything. Why don’t they just give him the permanent job instead of hiring someone who cannot do it? The answer is always the same, too old. And you are happy to stay on contract? Same answer, no choice.

45 is the magic number. Why? Mandatory Covid-19 tests for people aged 45 and above with acute respiratory infection in Singapore and in Japan, Mitsubishi “plans to solicit voluntary retirement from management employees aged 45 years and over.”

How is 45 supposed to be old when life expectancy is like 88? It beats us too. No wonder everyone is rushing to make that quick buck by hook or crook by 45 these days.

It is the same for Gen X friends who successfully navigate their businesses through challenges and crises, setting new milestones for the company only to see their juniors (Millennials) get paid out of their share because management knows they (Gen X) cannot get a job as easily as millennials. That certainly was not norm during our time because you were supposed to pay your dues to learn from your bosses (Boomers) but now you (Millennials) get paid to learn. Yes, paid the teacher’s (Gen X) fees.

It is no mistake that bosses are having a hard time too. Imagine running a team and in comes a new hire that is supposed to report to work for training for a month, and the chap does not turn up on the second week of the job. When asked about their whereabouts, the answer is that they are working from home and there is no need to inform anyone including their supervisor in the office about it. How is WFH possible when they do not have a laptop or login ID? Baffled bosses do not know how to handle such management issues that the MBA does not prepare one for. (And there is no need for imagination because the above is a true story.)

Spare a thought for the downtrodden Sandwich Generation, which Gen X is typically termed, as opposed to the Me Generation (Boomers) and Snowflake/Strawberry Generation for the Millennials whose parents are mostly Boomers which makes Gen X-ers doubly sore because their lives have not been easy. Harvard Business Review revealed “Gen X to be the “leapfrog” generation, overlooked for promotions at higher rates than their counterparts in other generations.” Indeed, the majority of Gen X leaders have “significantly” fewer promotions than Millennials or Boomers, as Boomers decide to delay retirement and Millennials get all the media attention for their advancement.

Tell us about it or read the third paragraph again, for our poor friend’s sake. “Gen X’s promotion rate has consistently been 20-30 per cent slower than Millennials!” It is plausibly true because another Gen X friend has been roped in for a lot of extra work in the office with NO PROMOTION, NO INCREMENT and NO TITLE, and is expected to impart her trade secrets to the staff FOR FREE. She happens to be a pushover Gen X, who agreed to work for a lower rank, yet remaining loyal while never getting a promotion (sounds awfully familiar again).

“While Gen X leaders aren’t being rewarded with promotions as often as their Millennial and Baby Boomer counterparts, they are bearing the brunt of the workload. Gen X leaders in both first- and midlevel positions manage seven direct reports, on average, as compared with five direct reports for Millennials holding a management role at the same level. As Millennial and Gen X leaders begin to compete for the same midlevel and even senior-level roles, companies risk losing many of their highest-performing leaders if they don’t work harder to retain them.”— Harvard Business Review

By far, Gen X is the smallest generation by numbers. For Singapore in those years between 1965 to 1980, it was “Two is Enough” per family and it was not until 1987 that “Have Three or More” was encouraged. In the U.S., there are only about 65 million Gen X-ers compared to the 75 million Boomers and 83 million Millennials, to talk about feeling “sandwiched” besides being caught between looking out for the neurotic and stressed out Gen Z (who are more anxious about exams than Covid-19) and ageing parents, for all their emotional, psychological, financial and health needs.

Yet Gen X would be the toughest generation, having more experience working through tumultuous times; they were in the workforce during other pivotal times like the Asian financial crisis, the dot-com bubble, 9/11, SARS/Gulf War and the 2008 GFC even if they have been swelling the ranks of the retrenched PMETs recently.

It is unavoidable that most resources would have to be directed at helping the young to get started in life and it has been a rough ride for the Millennial generation who were setback when they entered the workplace in the aftermath of the GFC and are now finding themselves in another crisis in the supposed peak earning years of the older Millennials. It takes a toll on the mental health if one has insufficient savings or financial support from relatives or friends, not to mention the feelings of alienation from the better-off generations and thus, the rise of the anti-Boomer or Boomer-bashing or “OK boomer” mentality which has somehow extended to the sandwiched Gen X cohort as well, as the socialist slant (and anger) erupts around the world.

This has led to a recent report by Deutsche Bank strategists warning the world to brace for an “age of disorder” where millennials, firmly established as the generation of ‘have-nots,’ take their revenge and redistribute wealth from the old to the young as their voter numbers see them “take more control and skew policies to redistribute wealth away from older generations to the young.”

“Even as of the fourth quarter of 2019, millennials were still below, in terms of wealth, where we would expect them to be based on older generations at similar ages,” said Federal Reserve policy analyst, Ana Hernandez Kent.

Bloomberg reports “Broke Millennials Turn to Day Trading to Strike It Rich in South Korea,” where the only alternatives for the ordinary Millennial is to “either win the lottery or trade shares” and the idea of UBI (Universal Basic Income) is fast gaining support just as the share of young adults living with parents in the U.S. rises to levels not seen since the Great Depression era, becoming a majority for the first time.

It is clear that the folks up there are paying attention as we read daily headlines such as Citigroup’s intention to hire 6,000 young people in Asia, Malaysia to foster youth connectivity for them to “elevate their social-economic status” even as young people in Singapore are quitting their jobs without another offer for various reasons. This perhaps accounts for the high unemployment rate for the below thirties in Singapore even as the numbers are also pretty unkind to the 40- and 50-somethings.

Hashtag #GenX was trending when Covid lockdowns began earlier in March this year. The “sandwiched” class has no choice but to take Covid seriously, while looking after their parents and children (as already stressed out Millennials and Gen Z are numbed to the additional worry in their lives.)

Yes, Gen X is the overlooked ‘Trainspotting’ generation looked down upon by both the rich Boomers and the presumably more tech-savvy Millennials, but we can vouch for working doubly hard throughout all the crises that Boomers and Millennials may not have managed to entirely experience. And now Gen X-ers are also bearing the brunt of the Millennial wrath just for being “old.”

No, it is not OK because Gen X is holding up most of the world right and keeping it together (go back to Para 3). Wharton professor Mauro Guillén predicts that “gray is the new black,” and Gen X-ers will finally be in vogue in 2030 (assuming they stop screwing up their Gen Z kids and starting looking out for each other) as they pass the “sandwich” baton to the Millennials.