What You Should Know About The Singapore Spring Monetary Policy Statement 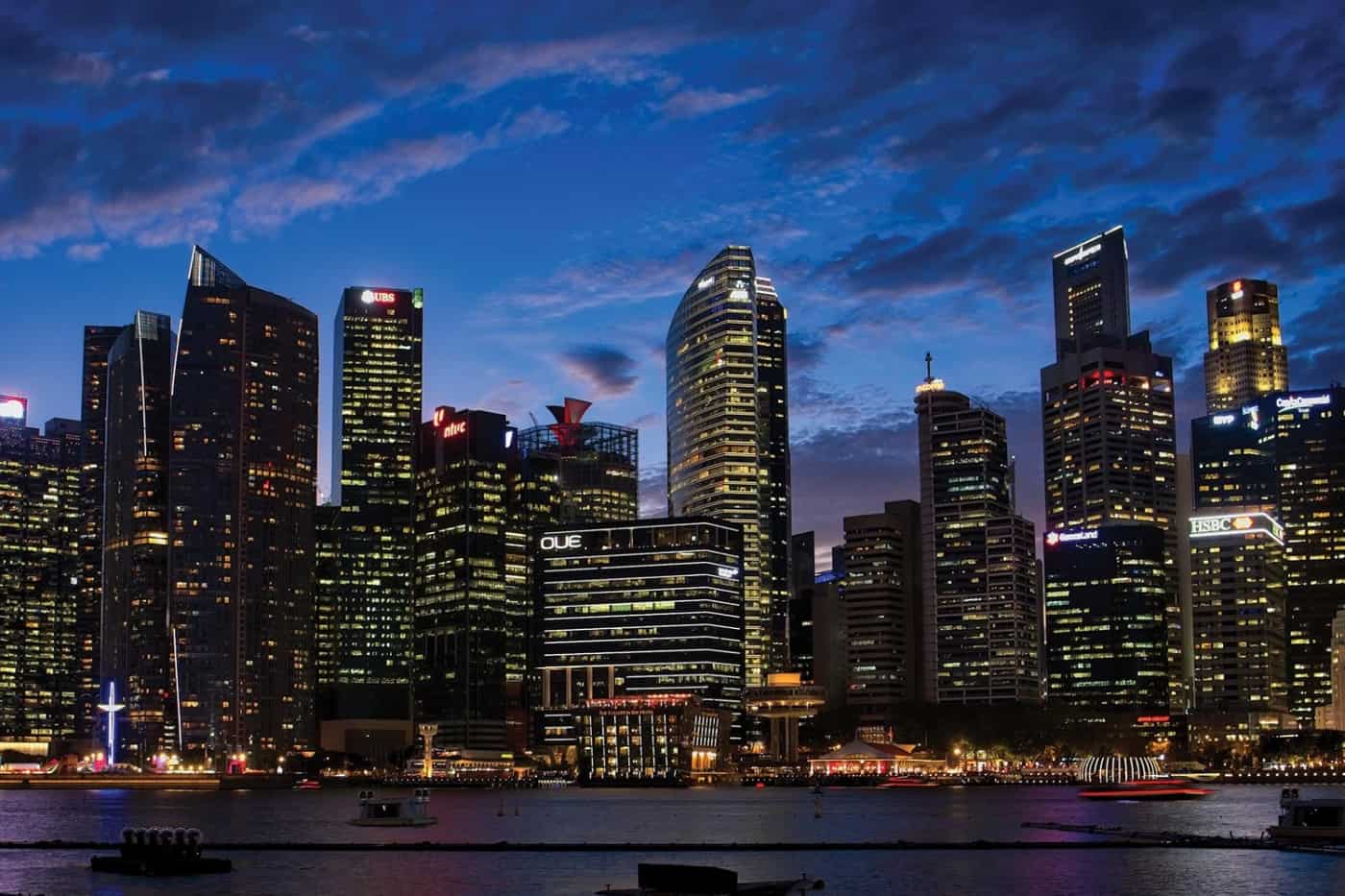 April 2018 is probably the best month to have a non-G3(+China) central bank meeting because no one would be paying much attention to you in such times of market upheaval amidst geopolitical uncertainties.

The lucky stars are shining on the MAS to have their semi-annual Spring policy meeting because the only people who really care are probably those who have to write as if their jobs and livelihoods depended on it.

Thus we have decided not to write about the upcoming April MPS because it really should be ignored but we will write about everything else that is happening around the MPS as we reel after reading yet another mind-warping report, fully loaded with facts and charts, telling us that, under no uncertain terms, interest rates will fall after the MAS tightens the monetary policy.

It basically tells people who are ‘not smart enough’ to stay away from Singapore interest rate markets unless they are smart enough to grasp the concept of Singapore’s version of monetary-policy-without-interest-rates.

We have long given up, blushed and deferred when asked to explain the monetary policy to anyone who does not understand it yet, just as we have given up and boycotted Watsons stores for the past year since continually triggering the store alarm every time we leave which has been a traumatic experience.

You Can’t Miss the Boat with the SGD Dollar

The good days are over for the SGD because the speculators came, saw, conquered and left, The years between 2008-2013 have been spectacularly profitable for buyers of the SGD currency which gained between 5 to 44% against the rest of the field except for the Chinese Yuan (-6%), Swiss Franc (-11%), and Gold and Silver (non-currencies).

It was the simplest trades in those days for a foreign hedge fund, because the SGD monetary policy was on an ever-appreciating path with almost every policy decision to allow for the SGD to appreciate except for the rare April 2009 one-time depreciation in the heart of the crisis.

What more assurances or guarantees do we need?

We also note that the MAS has not mentioned much of the SGD dollar since late last year but everyone else has compiled nice reports on the matter with the majority expecting the MAS to return to a modest and gradual appreciation path in the SGD NEER from its current 0% stance in less than a fortnight’s time (between 6 – 13 April).

With the days of wild profits over, the market lost interest in the SGD dollar after the MAS adopted a zero appreciation stance since April 2016 with a caveat of “extended period” in Oct 2016 which meant no more free lunch, stamping out speculation.

Yet we should not ignore the irony in both “modest and gradual appreciation” and “zero appreciation”, because it also means no loss expected in a land with the 1 trillion dollar reserves.

And the SGD dollar has not failed its supporters in the past 2 years, delivering modest gains against the NEER basket despite the zero appreciation.

Behold the beauty of the SGD NEER chart below where we witnessed new record highs in the SGD NEER since April 2016, defying the zero appreciation policy stance.

Why the Loss of Interest in the SGD?

Predictable. As it is, the market has already priced in a return to a “modest and gradual appreciation” policy stance. Even if it does not happen this time, it will surely happen in October because the SGD dollar will never depreciate (except for those once-off times when the midpoint was re-centred).

Non-transparency. The monetary policy has long been an enigma for the marketplace and the SGD NEER basket and its weights are a closely guarded secret along with the timing of each reset, just as Singapore’s actual national reserves number will never have been known (which is not really a problem, in our opinion). It is thus, not really a surprise that MAS ranks behind most of her regional peers in the Dincer/Eichengreen Central Bank Transparency Index pictured below.

We do not know much about the how the policy works, how SIBOR is derived and all that although we are sure it is predictable enough—always appreciating. We appreciate that well but it does make the SGD markets perhaps more unfathomable than others. Why do we need to be more transparent than that?

Global markets have changed and Singapore’s share has shrunk since China started opening up. China’s inclusion into the MSCI and various other global indices just make the rest of the world more interesting for the big investors in this trillion-going-on-quadrillion world where Singapore is really deemed too small to be significant in major portfolios anymore, except as part of an ETF.

What Are People Thinking Will Happen?

We are probably alone in the “not sure” camp of what MAS actually communicated in October last year although majority of the analysts are dead sure that they have dropped their forward guidance for zero-appreciation when they referred to their “extended period” wording in past tense.

We are not grammar experts or fortune tellers and do not have the luxury of private meetings with the central bank that justifies the high wages of those who do.

Those folks are saying that the expansionary budget of 2018, the massive spending plans for healthcare infrastructure, security and education, plus the need for sustained investment returns (largest contributor to Singapore’s revenues), along with the intact growth momentum, spending and inflation are all valid reasons for the MAS to tighten monetary policy.

We cannot fault any of that given that the markets have already run ahead and priced in the lower interest rates that would result from the tightening, judging by the 3-month Libor versus Sibor difference of nearly 1%, something we have not seen since the financial crisis of 2008.

What Else is Happening Out There?

Nobody is really doing much out there.

The other 3 central banks of global consequence are mostly standing pat since the Fed began their hikes and in Asia, just Malaysia and South Korea have blinked to hike rates so far, Hong Kong exempted due to their USD peg.

April may prove to be the first-month Combined Central Bank Effort (QE) turns into deficit as the US Fed reduces bond-buying by another US$ 30 bio.

On the global front, we have erupting trade wars, wobbly stock markets, slowing growth and some crazy things happening in Libor.

We Lied, These are Tough Times for the MAS

Congratulations to the MAS. The managing director of the Monetary Authority of Singapore (MAS), Mr Ravi Menon, has been named the best central bank governor in Asia-Pacific for 2018 by UK-based magazine, The Banker.

We cannot help but empathise with him though because these are really tough times to be the head of a smallish central bank at the mercy of the big central banks and naughty markets out there.

The Fed only has to juggle what is on their plate, the U.S. economy and their problems, but little Singapore has to worry about the Fed, BoE, ECB, BoJ, PBoC and the rest of the world besides our little glowing economy.

Trade wars, elections, rate hikes and politics besides what Mr Menon mentioned in his speech in January about the Goldilocks period for the global economy and 3 Grumpy Bears of Inflation, Protectionism and Financial Instability.

To Tighten or Not To Tighten? Are We Fussed?

As we said before, we are not fussed with all the other factors at play these days and also because Singapore has achieved a perfect “assured no-loss” monetary/currency situation because it is always appreciating or zero-appreciating against a NEER basket which is anyone’s guess, with only one time miniscule depreciations in the past.

Besides we now have confirmation that the SGD dollar’s strength lies in the power of her massive reserves which are a state secret but estimated by pundits to be in the trillion dollar club (to rival Norges Bank’s NOK 8.118 trillion)

MAS can at best satisfy their biggest fans by doing their duty to tighten that policy so the economists, reporters and strategists can continue to look like certain geniuses when they say interest rates will fall after the MAS tightens the monetary policy.

As an April Fool’s joke, it would be a laugh if MAS did a re-centering while maintaining their zero appreciation stance. That would keep the peace and maintain the SGD’s strength and not stir economic growth.

For us, we prefer not to write about the upcoming April MPS for there is much to say but we will pay tribute to the policy even if we are not genius enough.

Disclaimer: The author is not responsible for the accuracy of the information provided in the contents of this post that may be misconstrued for fake news or misinformation of any kind. Read at your own risk and fact check against official channels of media.