Adrian Pang on Acting, Family and Rocking with Dave Grohl It’s two more months to the end of the year and while most of us are getting ready to go on vacation or simply wind down, the energy at Pangdemonium is rather different. In the last 5 years, Adrian Pang has been slowly disappearing from our TV screens, preferring to spend his energy on theatre work. Founded in 2010 by Adrian and his wife, Tracie Howitt, Pangdemonium has been churning out original and award-winning productions such as Falling, The Pillowman, and TANGO.

Pangdemonium’s work has always been an exploration of uncommon topics and themes that are often shunned by society—with the aim of highlighting thought-provoking issues as seen in Fun Home, the first Broadway musical featuring a lesbian protagonist.

“The character is essentially the real-life Alison Bechdel, who lived under the shadow of her volatile and complex father, both harbouring their respective sexuality: the former to epiphanic enlightenment, and the latter to tragic self-destruction,” Adrian says. “It’s very challenging and rewarding to explore complex and conflicted characters, because one learns so much about the human condition. At the end of the day, that’s what we are hungry to examine—real human beings.”

Seizing a moment amidst his busy schedule, we find out from Adrian what his passions are, and why you don’t see him in Chinese television dramas anymore. 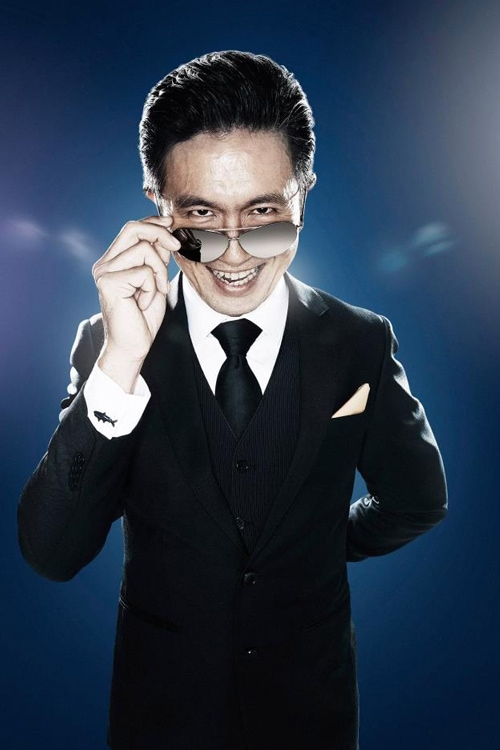 In Sec 3, out of boredom, I auditioned for a school musical, Oliver!, and got the role of Oliver’s granddad—that opened up a whole new world for me, one of make-believe, of escape, of pretending to be someone other than myself, which was then a self-loathing 15-year-old. I also discovered that you could meet girls through theatre, so that was a bonus. My two loves (and weaknesses): theatre and women were discovered simultaneously too.

I decided to leave the TV industry because I did not want to waste my life doing what I’d hate myself for. Life is too short to drive yourself to the grave doing something which drains your soul. I’ve dedicated myself to taking care of my family, who are the loves of my life, and working in theatre fills me with passion, drive, life, and love—and that to me, makes me the luckiest actor. I hope to work till I can’t anymore.

On The Foo Fighters

My dream collaboration would be to work with Dave Grohl and have him write a rock musical for us. If I get dementia when I am older, I hope my two boys will sit next to me every day and sing Foo Fighters songs. I met Tracie while we were working on a show together, and I wore nothing but a loincloth. She married me anyway, and we’ve been happily married for the past 22 years. We are awful as parents because we talk about anything and everything with our kids. No subject is considered a taboo which means that in civilised company, people tend to stare at us in disbelief. My two sons, Zack and Xander inspire and teach me about life every single day. Zack takes more after Tracie and has a calm and logical temperament, while Xander is more hot-headed and impulsive like me, so God help him.

Working on Fun Home made me really want to thank my dad and tell him how much I am grateful for him… and for putting up with my shit.

On being recognised on the street

Some days, I still get the “Eh, how come you never do Chinese drama anymore, ah?” question from people I meet. I just smile and show them my therapist bills.

I don’t like it when people ask for photographs when I am out, but my mum brought me up to be polite and gracious, so if people are nice, I can’t help but be nice back. To cope with stress and negativity, I have my voodoo dolls and shiraz.

On turning into a fuel source

I miss the early 1990s… and I would love to live in a world without WIFI.

If I had to bring anyone to a desert island, it would be my family. Although I’d probably drive them crazy in half a day, and then they’ll kill me for fuel.

But if I’m headed to a paradise island, I would like it to be the one where Gal Gadot or Wonder Woman comes from. But then again, I would probably also drive everyone there crazy, and still end up as a source of fuel. In a global climate that has become increasingly fractured and fragile, people are being divided, displaced and dispossessed. In these circumstances, it’s all too easy to surrender to cynicism and abandon hope altogether.

Rather than succumb, the theme of our 2018 season reminds us that even in the darkest of days we have to fight tooth and nail to rediscover some sense of hope, and find our way home again.

The Pangdemonium 2018 Season Ticket is the first of its kind in Singapore. This elite pass provides privileged access to all three shows of our 2018 Season. With three different price categories to suit every wallet, it also entitles the holder to Pangdemonium’s annual VIP Party, priority booking, premium personalised services and show dates and seat flexibility.

The Pangdemonium’s 2018 Season Ticket is on sale until 3 January 2018. More information can be found on the official website.

Adrian Pang on Acting, Family and Rocking with Dave Grohl
By Eleanor Hwang