Cyril Kongo: The Soul and Spirituality of Street Art 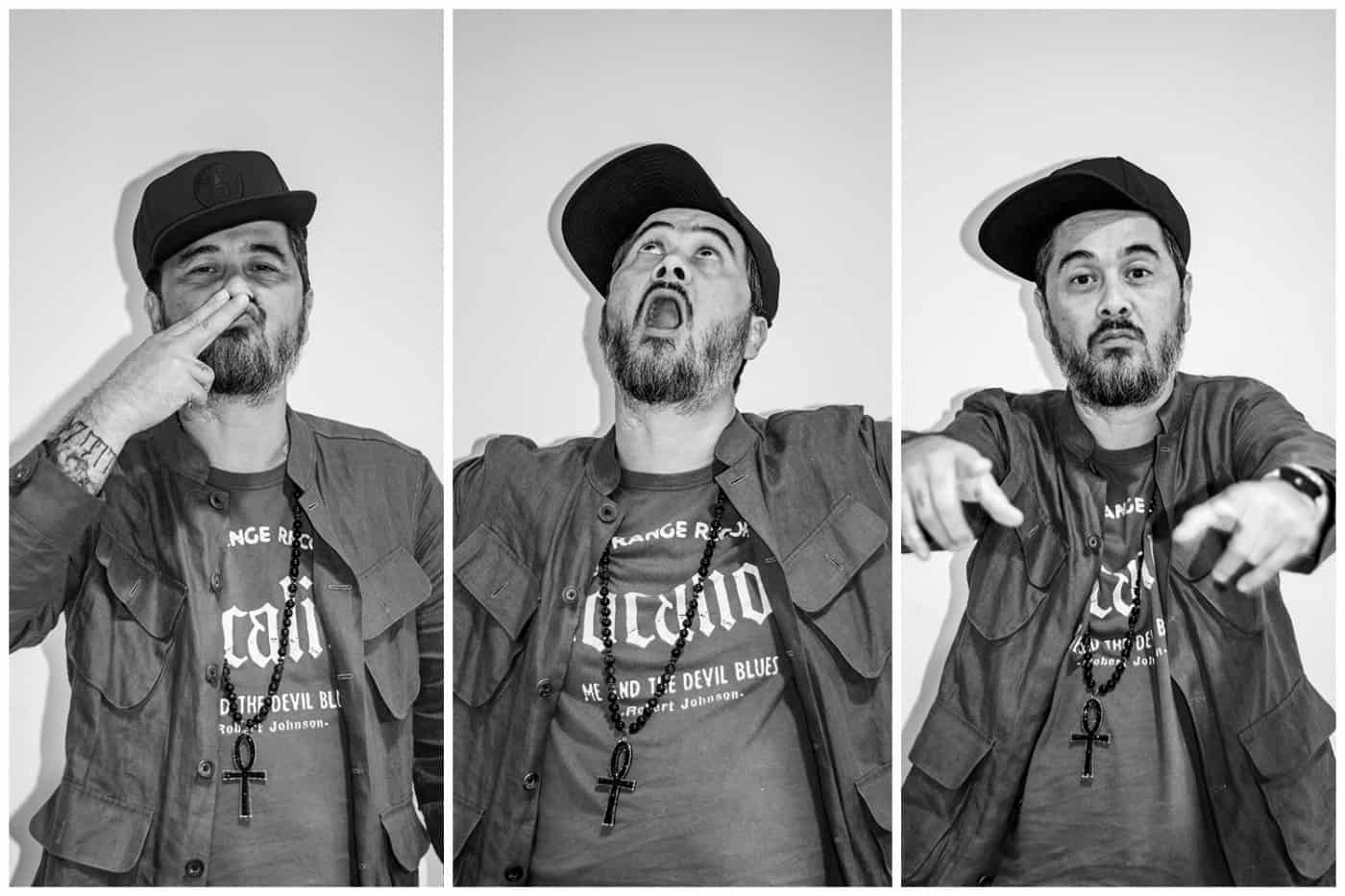 There’s no question about it. Cyril Kongo’s art is expressive. Abstract yet avant-garde, his contemporary paintings betray his roots in street culture, boasting layers of overlapping text that echo the tangled lettering of graffiti tags. Each canvas bursts with bold, saturated hues. In front of the camera, the second-generation propagator of French graffiti art comes alive just as vibrantly. Sitting down for an interview in a temporary studio space at The Mill (where he recently held a solo live studio exhibition, Les Ephémères, with Karen Rubenstein-Lorato’s Canvas & Cloth), however, he presents a more reflective, relaxed persona.

It’s in the way he leans all the way back on the couch, mid-conversation, and in his somewhat blasé manner of speech. There’s poetry in his words (which could be simply a corollary of being Parisian), particularly when he waxes lyrical about art and life. “Colours are life… I try to plant positive seeds to get the sugar of the fruit,” the heavily tattooed French-Vietnamese artist tells me of his vivid style.

Despite his violent past, which involved getting into fights when he was younger, the 50-year-old is a spiritual man, through and through. “Before I touch anything in the morning, I meditate for about 30 minutes to an hour. I try to ground myself and be connected to the sky. I am merely a channel,” shares the artist, who was part of the iconic Mort Aux Cons (MAC) CREW in the early days. Since then, he has gone from the streets to the galleries and worked with brands like Hermès, Chanel and Richard Mille.

Most people wouldn’t pair spirituality with street culture, but Cyril sees beyond each piece of work, and addresses them as if they have a distinct soul and energy. “I like painting at the speed of dripping water. This is why I often do many paintings at the same time and try to share their energy. Sometimes one might be more difficult than another, so I’ll let the more difficult one ‘sleep’ for a little bit first,” he says. Ultimately, art is about life to Cyril and his ethereal disposition will inevitably draw you into the lifeblood of his creations.

High Net Worth: What’s your definition of being an artist?

Cyril Kongo: An artist is someone who expresses themselves, someone who crystallises time.

How did you get into graffiti art?

I started doing graffiti art in 1986 and was from the second generation of graffiti artists in Paris. When I started practising graffiti, I fell in love with it. I really liked the energy. At that time, I needed to express myself. I was looking for vocalisation. Years after that, I changed my mind as well as my medium. Back then, I spent my time on the streets doing graffiti, big murals, painting on trains and big furniture. It was quite fun. It was like I was two different people—that kid from school, and that ugly man on the street.

What were you like as a kid in school?

I didn’t like school. I’ve never been able to stay within the four walls. It always made me nervous. I used to get into fights a lot when I was younger. I had two forms of expression: drawing and violence. I prefer drawing now.

What got you into these fights?

People in school would push you until you’re at your limit. They’ll insult you, test you, and say that you’re nothing. I used to want to prove that I wasn’t nothing. If I were nothing, then they were less than nothing. Sometimes, they drove me crazy, but I was trying to fight for myself as a human being.

What is it about graffiti art that appeals and speaks to you?

I enjoyed it because it came from my generation. When I used to practise graffiti, I had friends who did digital arts, friends who were dentists, writers, actors, singers. It was fantastic. I had a chance to be surrounded by people who were creative. They were dreamers, and that’s why I chose graffiti. Maybe if I was born a hundred years ago, I would have chosen to be an expressionist artist or something.

I see that a lot of your art is very loud and colourful too.

Yes, because colours are life. I’m Vietnamese, my father is Vietnamese and I went to France as a refugee. I understood very quickly what it means to live in the present moment. Today is the day you make your future. You can’t think about the future if you don’t create today. I try to plant positive seeds to get the sugar of the fruit.

Is your art all about positivity?

It isn’t about positivity. It’s about life.

What are your thoughts on the ongoing debate on whether graffiti is considered art or vandalism?

Graffiti is whatever you want to express. Back in the day, I got sent to the police station a lot. When I was younger, even though I was doing commissioned work, people would see me with my tools and spray cans and call the police to take me away. Three or four policemen would come, and I had to explain myself by telling them that this is my gift, and tomorrow, I’ll be paid for it. Tomorrow, it will be art. From the beginning, I was sure that graffiti would be a strong art movement. But it takes time.

What do you do in the morning when you wake up every day?

Before I touch anything in the morning, I meditate for about 30 minutes to an hour. I try to ground myself and be connected to the sky. I am merely a channel. I’m confident about the saying, “You get what you ask for.” It says so in the Bible, in all the holy books, that when you ask, you shall receive. It’s all about your intention. And if you want to have good intentions, you have to be grounded. That’s the most important thing.

When I wake up, I say thank you to be able to live one day more, to be part of this miracle that is life. I am thankful to have a good body and mind, and for the God who lights my step every day. After that, I get to my intentions, asking for what I want for the days and weeks to come. I ask to be able to achieve excellence every day with the vision I have for material abundance, abundance in affection, and peace and joy in my family.

Have you always been a very spiritual person?

Yes, I grew up like this. Spiritual, but not religious.

What’s the difference to you?

Religion has to do with politics. Spirituality is about connecting with the planet and the people. Sadly, the word, religion, may be nice, but people often try to manipulate others into it, in the name of something or someone.

I like painting at the speed of dripping water. This is why I often do many paintings at the same time and try to share their energy. Sometimes one might be more difficult than another, so I’ll let the more difficult one ‘sleep’ for a little bit first.

A lot of your paintings incorporate language and text. What is it about words that inspire you?

The words that inspire me often come from music, the names of my friends, countries… I love talking about travelling, the world, and my city. Also, friendships and relationships. I try to have as open of a mind as possible.

What’s one painting that you did that reflects who you are right now the most?

I don’t really know. If you see all my paintings, they’re all different. I try to keep the same graphic vocabulary, but the interpretation will be different. My identity at this present moment is colourful. I’m not like Mr Grey, from Fifty Shades of Grey. I’m Mr Colourful.

What do you think is the purpose of art?

It’s about the crystallising of time. I make art because I think everyone is important, and everyone wants to make history. But you have to create your own history. You can’t stop time. It’s crazy to think you can stop time. You can be a part of it though. You can live in perfect harmony with time, instead of wasting it because each moment is important.

Do you think there is such a thing as bad art?

What kind of art do you not enjoy?

Art is about emotion. I don’t enjoy things that I don’t understand. Once I start to understand it, I’ll start to enjoy it. Sometimes, you have to ask yourself what you didn’t understand. Wait, and talk to the artist or gallerist if you can. But sometimes, there’s nothing to understand. It’s just what it is. If the art touches you, it doesn’t matter if it’s good or bad. You’ll want to see it again and again. Maybe then, you’ll begin to understand it. I believe the journey is more important than the art piece itself.

Finally, how has working with luxury brands changed the way you see luxury and expensive objects?

Insights
Weighing In on the U.S. Election Under a Hedge
Automobiles
Say Hello to the New Lamborghini Huracán EVO RWD Spyder
Style
Top 5 Products to Combat Frizzy Hair in Singapore
Features
What Mindfulness Is and What Meditation Isn’t
Dining
The A to Z of Singaporean Food