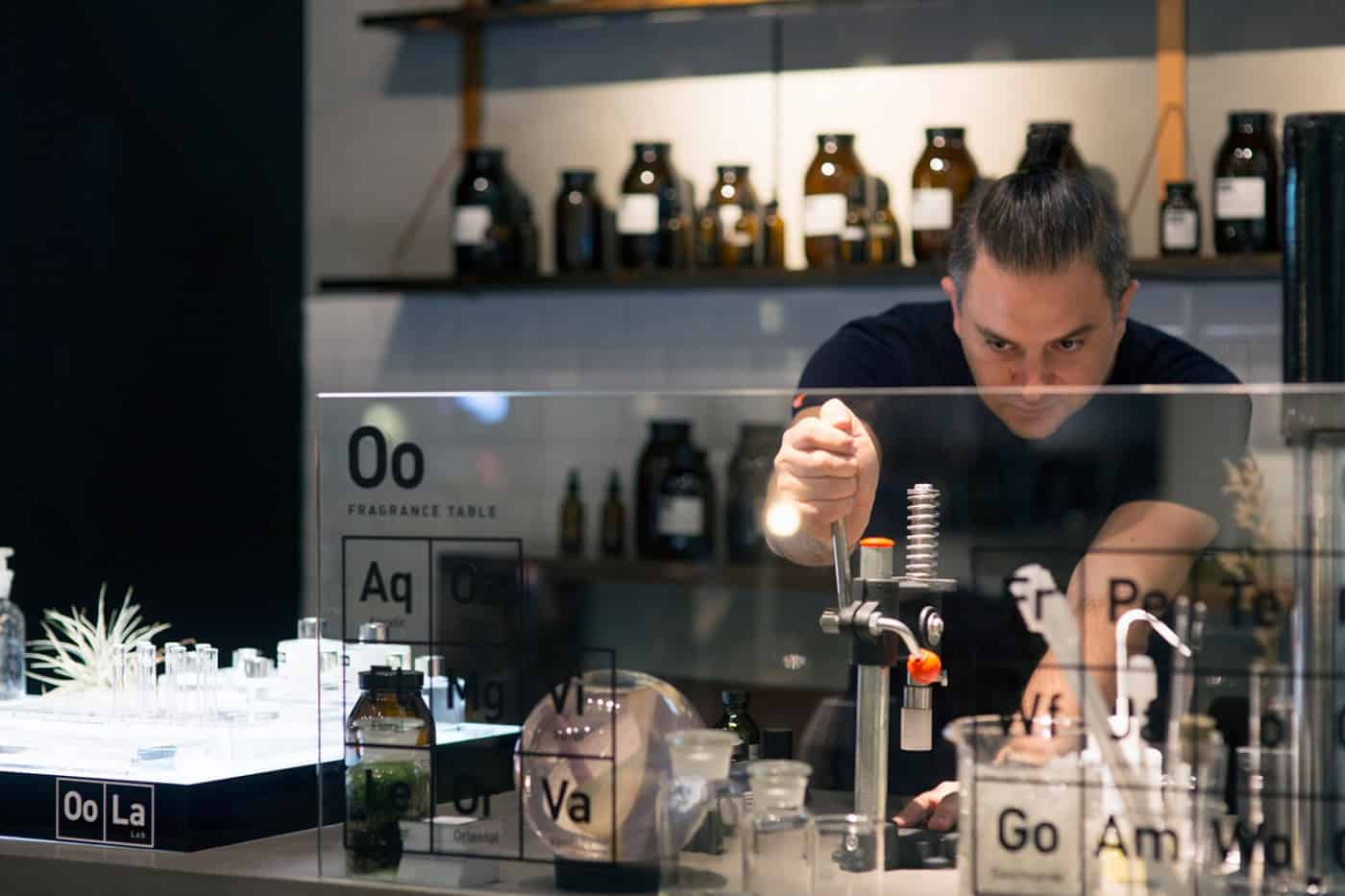 “We have dead bodies at the back of our lab,” Terry Jacobson says in jest.

It was exactly just a week ago when I re-watched the movie, Perfume: The Story of a Murderer. And as the founder of Oo La Lab, Terry’s words remind me of a scene where the protagonist keeps a cadaver in a water tank in an attempt to extract a human scent. I shudder at the thought.

Exiting the elevator, I am drawn to a faint waft of fragrance. Like the protagonist in the movie, who follows the girl’s scent—the one who eventually becomes the linchpin of his creation, I too, decide to follow the trail, which eventually leads to Terry’s lab—a space constructed with clean lines and monochromatic hues.

I knew about Terry’s work long before I knew his name. After all, he is the man who develops customised fragrances for shopping malls like ION Orchard and Tangs. These two examples are part of the many creations by Allsense, the parent company of Oo La Lab, which also has an impressive portfolio of clientele ranging from Mulberry to Pomellato.

As I sit down with Terry, he sips periodically on his ginger tea, occasionally glancing at the dregs and marvelling at how raw and organic they are. His attention to detail and sensitive nature provide an insight into his personality and why he has a knack for creating the right scent. “I like how the sense of smell can be a scent of need that is so personal. It’s in the small details and we want to explore this personal journey with our customers.”

Since his childhood days, Terry always had an inquisitive nose. “Growing up, my house had loads of pine trees and even though I disliked the smell of raw sap, I was fond of the woodiness,” he says. After spending his formative years in South Africa before moving to Sydney, Hong Kong and finally, Singapore, Terry who has 10 over years of expertise in the fragrance business, takes us into the enigmatic world of scents.

HNW: Tell us the story of Oo La Lab.

Terry Jacobson: We started Oo La Lab about a year ago. We borrowed the French term, “Oh là” which as you may know, is often used to express joy. So the name is an expression of complexity, individuality, emotions and a chemistry of things coming together. When you combine the word “oh là” with a form of science and express it as a tagline or a chemistry of emotions, it sums up the duality of the brand.

I have been in the fragrance industry for over 10 years. We have worked with ION Orchard, Changi Airport and many other hotels and malls. When I was dealing with those brands, I realised that a lot of them do not know much about fragrances, but they would have a highly emotive reaction. And you either love it or hate it… or “this smell reminds me of this or that”. I am also very passionate about the power of our human senses. The sense of smell is such a wonderful but forgotten sensation, so I wanted everyone to have a platform to create their own fragrance, and to tap into this wonderful world where is chemical yet mysterious at the same time.

Can you tell me about the space?

We are located at Delta House, which is an amazing industrial building that houses some of the most interesting tenants. It might be a little off the beaten track, but once you enter, you just might be surprised. The brand wasn’t founded on a specific business plan, but on the premise of scent-making and how we respond to different smells.

Aesthetic wise, we feel right at home here. Before we took over, the space belonged to an architecture firm. There is a great amount of natural light that comes through with the high ceilings and there is a kind of industrial vibe that really resonates with the brand and our experiences. To some extent, we want to create an immersive experience where people are measuring and mixing, right down to the exact specification. Sometimes it can get so intense and quiet that you can hear a pin drop. I really enjoy seeing people get so involved. The sense of smell is such a personal thing, which is why every fragrance is unique.

How do create an identity for a scent? And does Oo La Lab have its own scent?

We try to understand the DNA of a brand like their choice of colours, designs, lighting, music, customers, etc. We look at it as a whole and the kind of emotion they want to evoke for their customers.

We have briefly thought about it. Oo La Lab is still quite young and we are still on a journey of discovering what truly represents us. However, I do believe that in time to come, we will find our own scent.

When did you discover that you wanted to work with scents?

I have always been an experimental person, and I like how the sense of smell can be a scent of need that is so personal. It could vary from the smell of fried onions to freshly-cut grass. That was intriguing to me, so I decided to become an advocate. Perhaps one day, different scents might be emitted from our phones, but the real beauty lies in the moment that we share, right now.

Different scents have different rules and emotions that the client wants to express. Take the Universal Studios Singapore Halloween Horror Nights that we have been working with for the past 2 years as an example. They wanted to create a scent of horror, so we looked at the different scenes and the context of each space. Some of the briefs were a direct request like the smell of burning leather or natural gas. You know when you smell gas, it creates a feeling of apprehension? As though something is going to explode, so it evokes fear and a sense of revulsion. We want people to form these impressions when we create smells like rotting flesh and dead bodies.

How do you create the smell of dead bodies?!

Hang on a second, we actually keep dead bodies at the back of the lab. [laughs] Fragrances are so molecular; once you analyse the structure, it can be replicated. We have quite a large library of fragrances ranging from a skunk to dead bodies and even the good stuff like bubblegum and cotton candy. So whenever we need it, we are able to tap into all these different kinds of experiences.

We do receive a lot of weird requests. We had an overseas project, which was to create the scent of dinosaur poop. That was weird because no one knew what dinosaur poop smelled like.

What is the future of Oo La Lab?

We are still enjoying this adventure. Just yesterday we were making candles that smelt like chill crab, just for fun. We have also received a lot of positive feedback and would definitely like to expand into a few more countries next year.

Dining
Employees Only Singapore: Where Quality Drinks and Food Are Not Mutually Exclusive
Culture
Celebrating Female Friendships In Films
Dining
A Collaboration Dinner To Remember: Dewakan X Halaigh
Automobiles
The Jaguar Vision Gran Turismo SV Is an All-Electric Virtual Supercar
Dining
Barbary Coast Is the Bar to Hit Up for After-Work Drinks