Let’s Not Take Art Too Seriously. Eugene Soh Shows Us How. 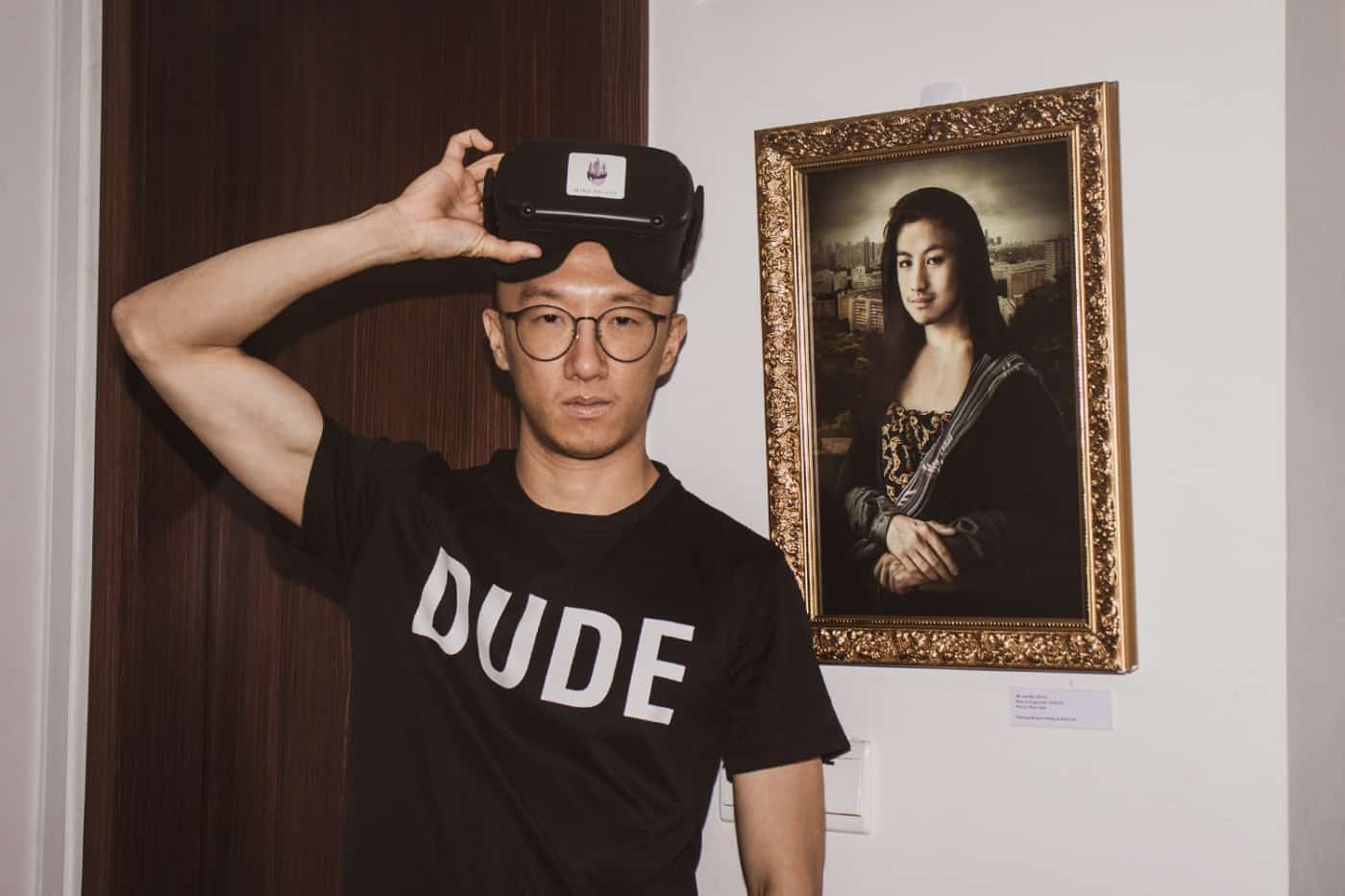 Eugene Soh is accessorising himself. Instead of hats and rings, he places a creepy, hyper-realistic head mask of a crying baby on his left hand, and sticks miniature rubber hands on his other fingers. His face remains deadpan, as he plays around with his disturbingly eccentric yet farcical toys. The founder of creative tech studio Dude Studios and social enterprise Mind Palace makes a living engaging in tomfoolery. His primary role at the moment? Creating Instagram filters, most of which are silly, with some downright nonsensical offerings (like turning yourself into a human centipede). While it may seem as though Eugene is like a child in a man’s body, this imaginative innovator does use his talents for the good of society.

When he isn’t dreaming up wacky filter ideas, he toys with augmented reality and virtual reality tools to create products for commercial brands and philanthropic organisations. One of his projects revolves around bringing one-of-a-kind, immersive experiences to dementia patients who are confined to their nursing home. “Early last year, I got to know a lecturer from the Wee Kim Wee School of Communication and Information. He went to stay at a nursing home for a month, and had the idea of bringing my VR headsets to these patients,” he shares. “When we brought all the equipment for them to play and experiment with, I saw the issues that they faced. Usually, we’d expect the user to know how to use the VR headset, but the elderly had no idea, so I made a custom app that didn’t require them to do anything. After that experience, my hands have been constantly itching to solve more problems.”

Eugene is mostly known now as a tech artist, but he made his name in the beginning as a photographer by re-creating a localised version of The Last Supper—which went viral on Facebook and launched his career as a multidisciplinary artist. Before that, he was programming computer games in school. “I’ve always loved playing with toys,” he confesses. Whatever the 32-year-old does, his M.O. is to have fun, reminding us that making art is one of the most primal forms of play that’s innate to every human being—much like crying is to a hungry child.

High Net Worth: How do you specialise in the creation of Instagram filters?

Eugene Soh: Last year, Singapore Tourism Board and Chan + Hori wanted to send a group of artists overseas. Chan + Hori recommended a group of artists, including myself, and wanted to feature my earlier series of photography works because it was fun and represented Singapore. They also knew I was into technology, and asked me to create an AR feature on top of the series. I was hesitant initially because when I did it previously for my own exhibition, I had to create my own app and beg people to download it. No one would usually bother to do it, so all the effort would be wasted. I didn’t want that to happen with this new exhibition, but they told me I could do it through Facebook. They were right, so I made a prototype in two days and within that month, they exhibited my AR work. Afterwards, I went quite crazy on the AR platform and decided to do more filters, because I realised how easy it was to reach the masses without getting them to download an app.

Speaking of the photo that launched your career, what was your underlying intention behind The Last Supper?

I grew up Christian and religious art has always fascinated me. I picked The Last Supper mainly because it’s famous, recognisable, and it’s the “last”, signifying my last statement piece. I like to explore a medium and push it to the max. Once I’ve had my fun with it, I’d just dump it and try another medium. For The Last Supper, a lot of photoshopping was involved because I shot everyone individually. I’d never done anything like that, so I was pushing my limits.

How long did you take to complete it?

The shoot itself took an afternoon. Looking for the right location required a few breakfasts, lunches and dinners at different hawker centres. The photoshopping took about a month.

Do you consider your current AR filters as art?

Yes. It’s my creative expression. People’s mindsets are completely off. It’s been hammered into them that tech is tech, and art is art. But they’re both actually the same! They’re all toys. They’re all platforms you can create stuff with. Technical coding is still a form of art.

There’s also new media art, digital art, virtual art, all of which incorporate various technologies. What do you think of the relationship between tech and art? Are the lines blurring?

It’s good that the lines are blurring. I experience that the most as well because there’s a price difference between an artist’s work and the tech creations. Sometimes when I’m deciding on how I should price something, I’ll think of which side to push forth more, the art or tech. Sometimes I get more value by establishing myself as a tech guy. It depends on the project. Sometimes they’ll use my artist name. Other times, they won’t include my name at all or credit me. They just want something interactive that works. That’s the tech side of things.

What kind of art do you not enjoy?

Pretentious art. I went through that phase already, so when I see it now…

What do you mean by “went through it”?

I made pretentious art, thinking it was so deep… Oh my God. But sometimes you wouldn’t know if it’s pretentious. Maybe it just looks pretentious. There’s a painting where the whole canvas was painted white, and it was named “White Rabbit on Snow”. I actually thought that was pretty clever!

What about artworks that you don’t understand?

I would dismiss them as pretentious in my head, but I know there might be a deep underlying meaning behind it that I don’t have the time to figure out. Usually, if an artwork requires me to do that, I think it has failed to reach the audience. But maybe the artist doesn’t want people to understand it. Then, they have won. My approach to art is for people to get it straight away. Sometimes, I’ll still hide little elements in the picture, like in my Sunday Afternoon picture. But it needs to get people’s attention first before they’re bothered to look at the smaller details.

Social media has really changed the way we consume, define and perceive art. Do you think it’s a good or bad thing? For instance, people have been debating about Instagram poetry and whether it’s real poetry or if it’s ruining people’s perception of poetry.

I used to think my photography was really good, that all the pretentious things I shot were really good. I used to look down on people who used Photoshop, thinking that they had cheated. In the end, I embraced it and saw it as a new medium. I know where the photographers, who see photography as pure and unedited, are coming from, but it’s more fun to go with the flow. If 10 years down the road something bigger than social media comes up, I hope we won’t be the ones to criticise it.

What do you think gives art its value?

This topic is super touchy. What gives any work of art its value is the amount of money whoever is willing to pay for it. For one of our most recent projects, someone was willing to pay $30,000.

Will going viral contribute to the value of a work of art?

Definitely. There’s an art restorer who tried to restore a painting of Jesus by Elias Garcia Martinez. She’s an amateur artist, so she drew Jesus’ face in a way that made him look like a monkey! It went viral! That’s a tourist attraction now, and the value of that artwork has definitely increased. It’s all about marketing. Your work can be shitty, but good marketing can help to raise its value.

I read an article recently about how artists become famous not by the originality of their work, but through their friends.

So you basically have to socialise?

I socialise because it’s fun, and I like to drink. [laughs] It’s a by-product. I enjoy drinking and hanging out with fun people, who happen to be working for Microsoft.

Should it ever be intentional?

Dining
Women Shaking Up The F&B Scene In Singapore: Shermay Lee
Style
Tired Of Your Usual Skincare Brands? Try These Instead
Culture
Hans Tan: Blurring the Lines Between Art and Design
Travel
7 Most Epic Train Journeys in Asia
Property
The Reef at King’s Dock: Singapore’s First Floating Deck in a Residential Development