Theatre Review: “This Is What Happens To Pretty Girls” is a Rightfully Uncomfortable Must-Watch 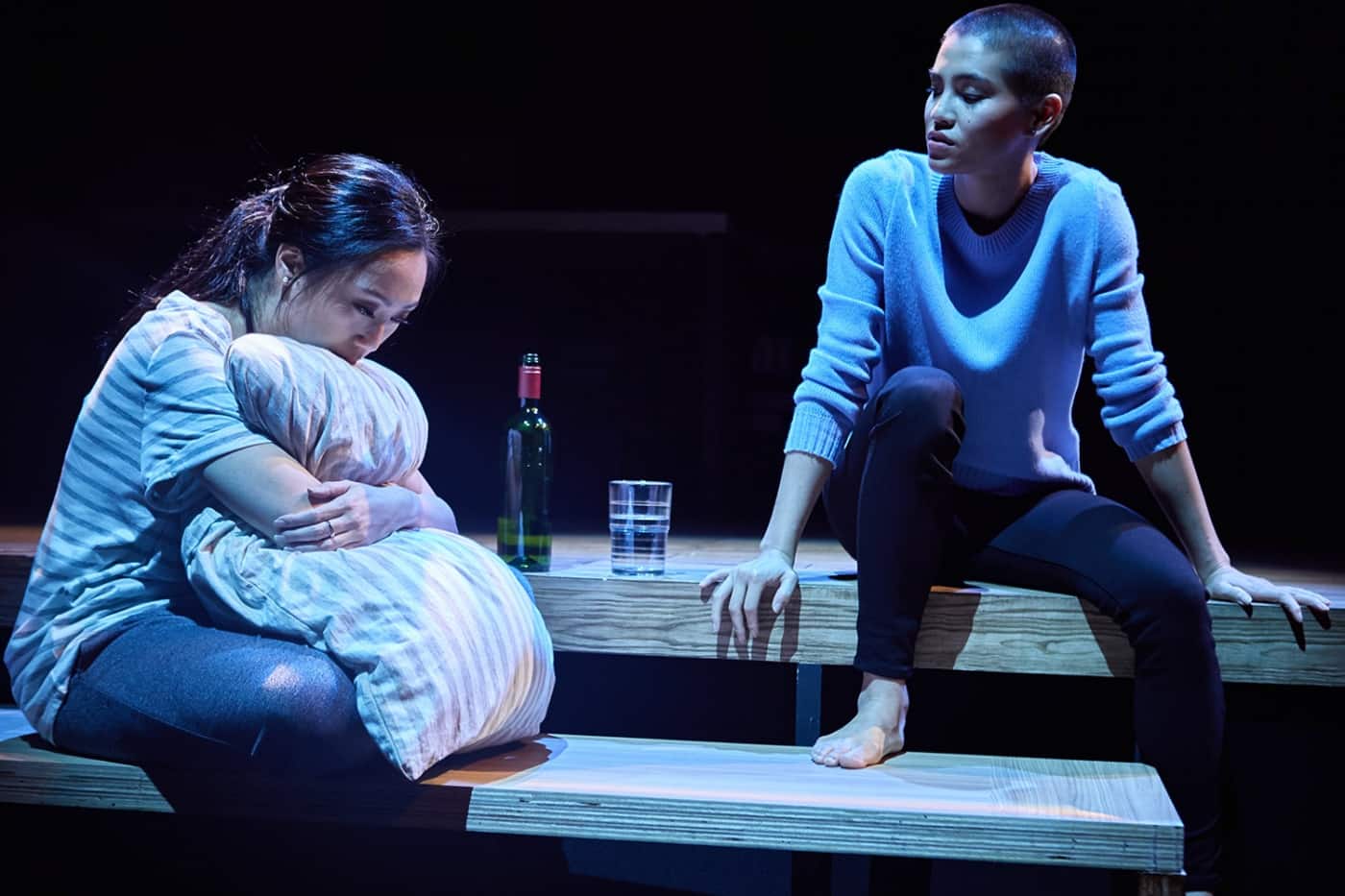 I’ll be the first to admit this. I was skeptical before the play started. Hell, I might have been the most unenthusiastic person at the Drama Centre Theatre.

While I’ve long been an ardent fan of local production house Pangdemonium, the image of Oon Shu An with makeup smeared across her face (paired with the title of the show) felt a little too on the nose in the middle of this #MeToo era, where Singapore’s hot off the whole Monica Baey saga.

I had expectations that This Is What Happens To Pretty Girls was going to be another commentary about sexual abuse against women, with two and a half hours of contrived dialogue and a few rape scenes. However, as I approached my seat and caught my first glimpse of Eucien Chia’s set, I realised this wasn’t some superficial show, trying to ride on the #MeToo wave.

Making a stunning first impression, the stage is anchored by giant sculptural works of art, made to resemble naked body parts—an attempt to make literal the idea of treating a woman’s body like an object.

Like a whole other character in and of itself, the set is made up of chairs, tables and structures that are designed with thin slices of wood. Placed a few centimetres apart to reveal the spaces between them, they appear like lines from afar. Lines that get blurry from time to time if you look long enough. It’s almost comical when you hear Robin Thicke’s Blurred Lines come on in the first scene.

Directed by Tracie Pang, This Is What Happens To Pretty Girls does a bang-up job of capturing the complexities of sexual harassment. Rather than a one-dimensional narrative about the oppression of women, it offers a multi-layered peek into the individual experiences of its eight diverse characters, each with their own story to tell.

Adrian Pang transforms into a sexist brute with a drinking problem, while Pam Oei serves as his right-hand woman at a tech company with a bro culture. In her theatre debut, Tess Pang, an employee of said company, goes on a date with her superior, Jamil Schulze, which ends on an uncomfortable note.

Oon Shu An portrays a professor who finds herself in a flirtationship with an earnest student, played by Thomas Pang. And finally, there’s Serene Chen and Paul Courtenay Hyu, who play a seemingly normal, drama-free couple. Of course, what you see isn’t always what you get. As the playwright Ken Kwek writes, you don’t know what people are capable of.

Over 2.5 hours, the play peels back the layers of each character, revealing a nuanced presentation of the innumerable issues and scenarios tied to sexual misconduct and gender inequality. It grapples with the painful realities of life, many of which hit so close to home that certain dialogues sound like actual conversations you’ve heard.

Everything feels familiar, yet nothing is sure. The script offers no straightforward answers or easy resolutions. Neither are there clear distinctions between who’s good and bad. The product of more than 100 interviews with survivors of sexual assault, it explores a multitude of perspectives, including that of the victim, perpetrator and the people around them. More importantly, it sheds light on the prevalence of victim blaming, the dangers of toxic masculinity, the iffy demonstration of consent, the foggy definitions of dating, and, most of all, the emotional ripples of a single act of abuse.

You may get a few laughs from the show, but This Is What Happens To Pretty Girls is at its core a drama-laden production that deliberately places you in a state of discomfort. Even the music (played between scenes) is difficult to sit through. Loud and discordant, it sounds like friction, forcing itself on the audience’s ears.

I’ve lost count of the times I’ve turned a blind eye to stories of rape and sexual assault, just because I didn’t want to face them and feel ill at ease. This time, however, I was forced to not just confront them, but also see through the eyes of the parties involved.

Considering the sheer depth of the subject matter, the play makes a laudable effort to cover as much ground as possible without getting too draggy. Instead of pointing fingers, it fights ignorance, approaches the grey areas with empathy, and prompts the viewers to do the same.

This Is What Happens To Pretty Girls runs from 10 May to 26 May at the Drama Centre Theatre. Tickets are priced from $40 to $75. Get them here.

Insights
ONE Championship Launches Their Own Version of ‘The Apprentice’
Insights
Collaboration, Innovation and Tech Can Help Drive Construction Industry Forward
Dining
Pantry Staples and Lockdown Cooking From Top Chefs
Style
5 Products for a Better Night’s Sleep
Insights
Here’s Why the Metaverse Is the Next Goldmine

Spend
Culture
Inside Johnny Two Thumb Tattoo Studio with Jaws
Spend
Culture
Cynthia Koh on Being Alone, Social Media Fame and Negativity
Spend
Culture
What Has Social Media Done to Us?
Theatre Review: “This Is What Happens To Pretty Girls” is a Rightfully Uncomfortable Must-Watch
By Angela Low
© 2023 High Net Worth All rights reserved.
Privacy Policy | Terms of Service