3-Michelin-Star Arpège Isn’t Worth Spending Your Green On 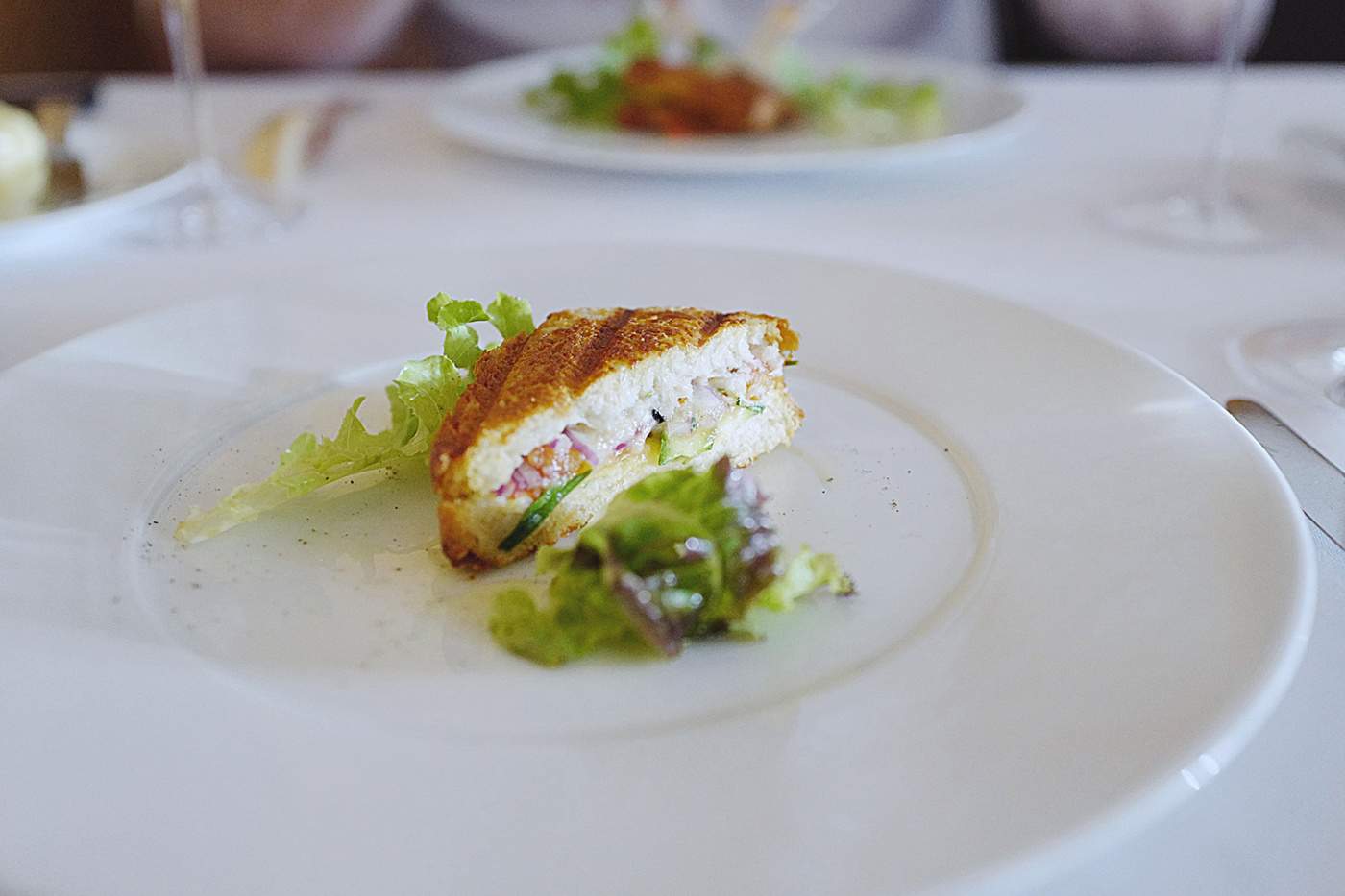 I wanted to like Arpège so badly. So much so that I dug my heels into the carpet and hung my head in shame as I approached the exit (perched precariously above a spiralling staircase that leads to the bathroom) to foot my bill. My partner and I caught sight of the starched, white-clad chef casually hanging out by the front reception and sanguinely asked for a photo. Chef Alain Passard not only obliged but proceeded to hug us in a warm embrace—setting off fireworks in my detachably aloof heart. That was possibly the sweetest rectification to an uninspiring 3-hour meal (expedited) with insipid service one would not imagine from a 3-Michelin star restaurant.

Granted that our meal was marred by the 40-degree heat outside and the stench of warm bodies in the subway prior to arrival, we pried open the front door with elevated whirls of excitement. What greets you is a splash, no, a blend of beige and whites. It’s not necessarily the most engaging but it does allow the vegetable cuisine to shine later on. At Arpège, the ‘surprise menu’ at lunch traverses the edible spectrum of summer vegetables from courgettes to cucumbers. And priced at an honest €175, as compared to the €340 (vegetable tasting menu) or €420 (sea & land tasting menu), it made the decision to stick with ‘The Gardener’s Lunch’ an easy one.

The room is filled with international guests and executives with deep pockets or generous business expenses. Pulpy reds were decanted and the rise of decibel levels in the adequately sizeable dining room was indicative of the adoration for Chef Alain Passard. A female wait staff moseyed her way through the maze of leather chairs to our table (I do admit that it was a bit too crowded for my liking) where she intuitively introduced herself and the offerings of the restaurant. Just after she had taken our order and passed us the wine bible, my partner looked up and said, “Just to inform you that I’ll have to leave by 2:30pm, latest, if that is possible?” “I’ll see to it,” she said. It was 12:00pm when we were escorted to our table.

So anyway, it was 2:41pm and our petit fours were deposited on the table, even before our chocolate mille feuille dessert had a chance to make an appearance. It’s all terribly rushed. I stuffed flaky pastry down my throat while avoiding trickles of melted coffee ice cream, inexorably scornful of the nonchalant, “Oh I see” remark we got from the very same wait staff whom we had informed earlier and reminded (out of desperation) at 2:20pm that we had yet to be served desserts. It gets worse. True story: I had the entire 10-course menu explained to me in French and the least I would expect was for them to make a mental note about my language preference.

I might have made you a cynic already, but there is light at the end of the tunnel. This lunch did not intrigue or delight me, but served more as an education. Cucumber, zucchini and garlic in various permutations throughout the dishes are being poured out to you like a broken recorder—there’s no deluding diners at this Gardener’s Lunch; vegetables straight from Alain Passard’s kitchen play the culinary leads. It’s a drill into seasonality, and honestly the arrangements can sometimes get a little repetitive. Get in the headspace that you’re here to witness a fresh movement, an improvisation on a daily basis carried out by one of the most esteemed chefs in the world—Alain Passard—akin to a high-end mystery box challenge, for all you MasterChef buffs out there.

First, there were tartlets of mushrooms, thyme, garlic, yellow zucchini and onion that demanded to be eaten quickly. But don’t forget to take a mental picture of said flavours, which will be repeated to an extent that you would be able to identify them blindfolded. My 3rd gazpacho in less than 24 hours in the city, made its point—cold soup is a hot favourite this time of year, and thinking of the raging heat situation through these insulated walls made me slurp the cucumber gazpacho topped with mint ice cream down with heartfelt gratitude.

Next up, that infamous hot and cold egg that Chef Alain has retained on his menu since Day 1. A take on the Chaud-froid d’ouef, the eggs (sourced from Loire Valley) have their heads lopped off and drained off their whites, leaving only the glorious yolks still in its shell, then simmered in a water bath just a wink before they set. Expect a sprinkling of chives, creme fraiche whipped with sherry vinegar piped overhead and finally a touch of Canadian maple syrup for a hint of candied caramel sweetness, with delicate flakes of Fleur de sel to strike a balance. It wasn’t life-changing in any manner, but it was very satisfactory.

I was delighted by the beetroot sushi. Then a similar plate mirroring mine was placed directly opposite, in front of my partner. I froze in horror. From where I was seated, I could have sworn I heard a mic drop, after all, he did express his utter disdain for this root vegetable when the staff inquired about his dietary restrictions earlier. Not wanting to cause a stir in the busy dining room, I did a quick internal switcheroo. But the damage was done. I was plagued by nagging thoughts like how hard was it to swap out the beetroot for parsnip, or whatever else? I was fairly certain the staff would pick up on our distress signals, but I was proven wrong—and was met with a sheepish, “I’m sorry, Sir.”

Parcels of tomato, thyme and sage as well as garlic ravioli float in a clear consommé that tasted of tomatoes. There was a brief moment of brilliance in the vegetable courses—a ratatouille of zucchini, courgettes, tomatoes brightened with mad dashes of tomato caramel. Meat made a debut in the next dish of mushrooms bathed in cucumber, mint espuma and the mystical vegetable merguez. Yes, it’s cabbage, garlic and seven different types of herbs wrapped in lamb skin—there it is.

The next dish was an uncannily similar shade of green. Lettuce and zucchini (they made the soup hot this time round) puree meets a soft cloud of bay leaf foam. A croque-monsieur sandwich interlude followed. Grilled bread stuffed with béchamel, parmesan, aubergine tomatoes and all manner of good things may seem like a lazy affair to make up the numbers, but it did hit the spot. For our final savoury course, we were presented with lamb stuffed zucchini flower and onion, the few sprigs of crimson basil rustling up brownie points. It’s a Cinderella story for the proceedings of the vegetable-led menu albeit a little too rich at this stage of the game.

Desserts, as I had mentioned earlier, was a game of burying the hatchet, an exquisite line-up of treats that required us to beat the clock. First, there was creme caramel profiterole filled with a revolutionary hay ice cream and drizzled with salted caramel. We cleared the plate with ease. Then there was a devastatingly tall and dashing Chocolate mille feuille layered with silky bittersweet chocolate ganache that’s as glossy as a hair model’s black tresses. We would have loved to devour the whole lot of caramelised puff pastry and blizzards of snow sugar, but when faced with the smorgasbord of petit-fours and running the risk of turning into a pumpkin, we cowered.

Till this day, I look back at pictures of that glorious crunch stack and regret my incapabilities. Chef Alain Passard, with his all Michelin achievements since the year I was born till present (with 3 Michelin stars to his name), is still eagerly working the stoves at his restaurant every day. I have nothing but respect for his choice to celebrate summer on a plate. But you’re better off spending your money elsewhere. Unless you’re a vegetarian for life, or infatuated with the idea of ravishing 50 shades of “green”, this place might not be your cup of tea.

[Related: Conquering the Loire Valley, One Bite at a Time]

Travel
How the Travel Industry Is Giving Back During the Pandemic
Insights
Asian Institutional Investors Prepared to Handle Risk in Pursuit of Better Returns and Yield
Insights
Strong Chinese Economic Expansion to Continue Despite Softer PMI Data
Travel
In Thailand, a Medical Destination That Converges Wellness, Science and Tradition
Travel
Going Off the Grid: Alwyn Chong’s African Adventure