A Night Out with Gaggan 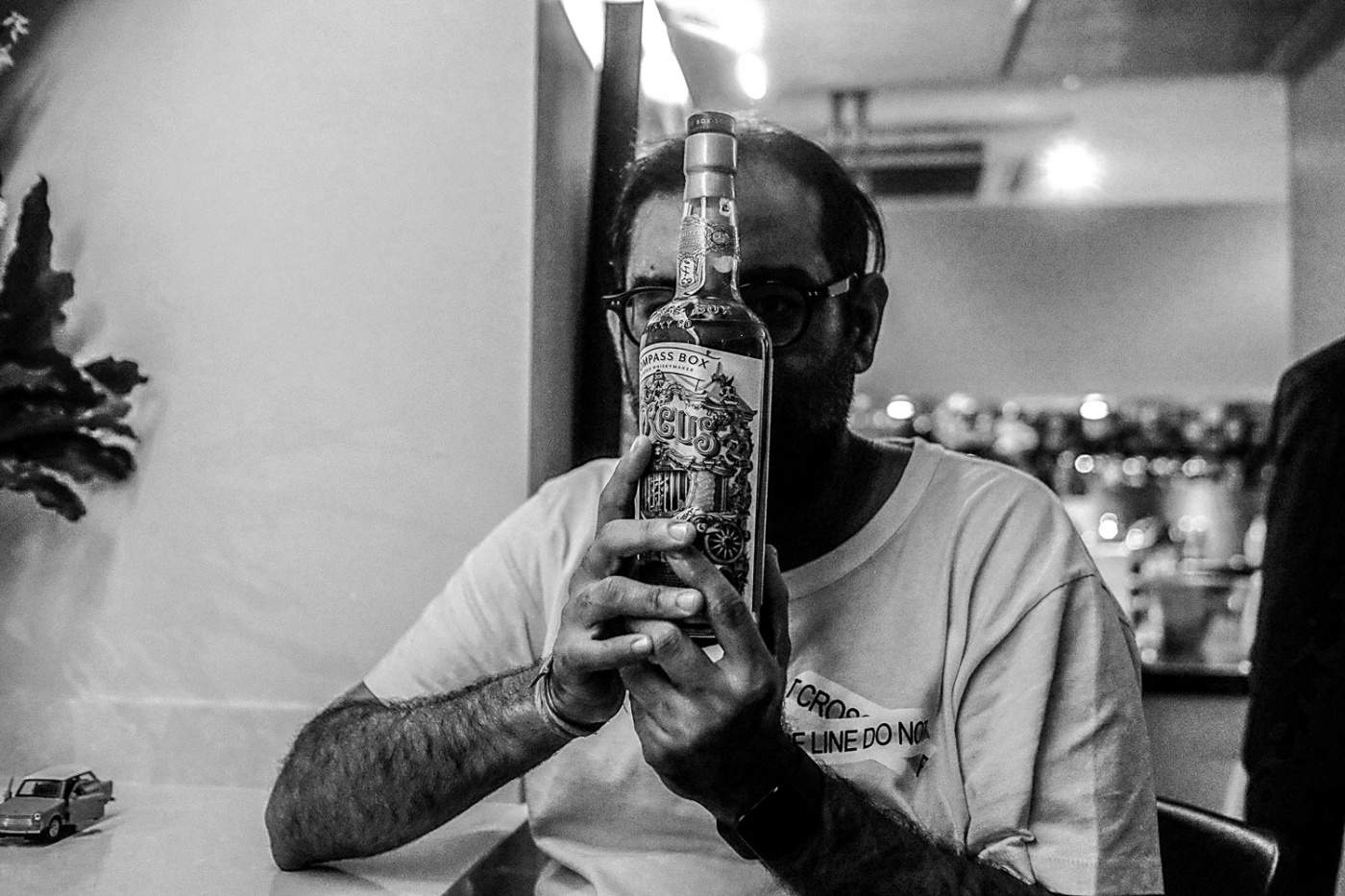 If you didn’t already know, Gaggan Anand is the chef equivalent of Freddie Mercury in the culinary world. He has managed to redefine traditional Indian food and put Bangkok on the gourmet map with numerous accolades, and deservingly holds top spot on the list of Asia’s 50 Best Restaurants. As I thread across the room with my date in tow, I sense the awed stares and green-eyed looks—all in recognition of the man’s mad talents, and enigmatic stature. But how did I get here in the first place? Let me fill you in on the origins of how we met.

My first encounter with this Willy Wonka-esque man took place 3 months ago, in Singapore. It involved the licking of plates at a colonial bungalow in the middle of the Singapore Botanic Gardens. Thereafter, we had after-dinner drinks that included Bunnahabhain 25-Year-Old whisky. There were moments of brief clarity between blatant hedonism and a certain je ne sais quoi in his mannerisms, which quickly piqued my interest. “You have to come and eat my food,” he asserted before putting me in a cab.

Now I am strolling into the chateau-esque luxuries of restaurant Sühring, located in the tranquil neighbourhood of Chong Nonsi in Bangkok, rocking up to a pristinely white-clothed table beside Gaggan. “You know what I hate the most in a restaurant?” he remarks. I adjust the bodice of my glittery dress anxiously. “Fake flowers and fake smiles.”

Needless to say, there is a certain nervous energy in the room, the slight misstep of a bunch of silverware plummeting to the floor producing a bitter sound that reverberated through the room. Gaggan shoots daggers at the freshly integrated staff, and I began to re-evaluate my life choices. Should my journalism career take a bullet to the head tonight, I take comfort in knowing that the mortuary is the warm and plush Sühring.

“Let’s start with a Gin & Tonic,” he bellows. The gin menu is littered with many solid German options that have fallen off the radar even where my drinking proficiencies are concerned. He removes his glasses and furrows his eyebrows in concentration. Seconds later, he points to the most pricey gin on that list and says, “I must have the most expensive drink on the menu. Blame it on the poverty syndrome.” The Ferdinand’s Saar Dry Gin being the object of his fascination (not for long, though) doles out the punches with thirty organic botanicals infused with Schiefer Riesling—it is bright and fruity, stripped with minerality from the wine.

Tiny beers mugs and paprika dusted Bavarian aged cheese rolls (obatzdarollchen) are brought to our attention. Even before the staff has a chance to explain the dish’s story, it vanishes within seconds into my partner’s stomach. I make a brief mental note for photos to be a brisk affair, if I wanted any at all.

In between the throngs of snackage that make their appearance, our conversation drifts to the things he loves the most—‘obsessions’ is a word he often uses. Gaggan’s voice is vibrant and heady with intonations as if to express his fleeting train of thoughts. One moment he is high on expressing his love for vinyls and all things Japanese (with a heavy emphasis on Onitsuka Tiger sneakers, sushi and soba), the next he is purring with mischief as he peruses the wine list in search of his favourite riesling. Once, in a record shop in Mexico, he coerced the shopkeeper to dedicate a few hours of his time to aid in his record hunt, urging him that more than 70 vinyls will be purchased that day. And it did happen, along with the bonus gift of free transfer right to his hotel doorstep. To say that Gaggan was cut out to be a businessman is very much an understatement.

“I’ve left a sleeping giant at Mihara Tofuten. 2019, I want to focus on it.” Gaggan talks me through the process of his chanced encounter; scrolling through his phone vigorously in a bid to help me understand his founding obsessions with tofu. Fukuoka is where the magic happens. There’s a photo of the street which houses 25 izakayas, all of excellent calibre according to him, then there’s a photo of a nondescript lush greenery surrounding a picturesque lake—the source of water from which the tofu is produced. This is also the same place where they import their water from for tofu production. He reminisces the first time he enjoyed the proverbial tofu experience. “Fuck, it was tasty!” he exclaims. Picturing the moment that had so much weight to fuel such lofty ambitions, I wonder if he ever second-guesses himself.

We trade our white linen tables for the küche experience. Thomas Sühring is there to greet us, chivalrous smile and all, ready to save our empty tummies from damnation. It is the Seabass with speck and graced with rivulets of vibrant cucumber water that confirms the brothers’ ability to understand the importance of seasonality.

The next course presents a different kind of beast, well versed in elevating the luxuries of winter black truffle. The Spätzle throbs with inspiration, down from its odd-shaped strands and higher than usual egg to flour ratio leading to some spellbinding swoon-worthy moments. But it is still the dash of crispy onion that puts the saucy comfort dish on notice. Gaggan finishes his dish effortlessly and proceeds to trail his finger across the bottom of the dish. “Would you like to have some more?” I ask, feigning a poor appetite in light of my struggling waistband. “I’m trying to pace myself.” He averts the observatory looks from the staff and proceeds to execute a quick switcheroo with me. “Just pretend like you finished your dish, okay?” I nod through a dense fog of amusement. Gaggan is eating from my plate. I’m pretty sure we have some form of camaraderie going on.

As he speaks, Gaggan’s layers peel away to reveal a more reflective, if not vulnerable side of him. He muses about fake people, his choice to adopt an expressive form of fashion and then briefly mentions Chef André Chiang. “I miss that man. Our dynamics were what propelled us forward,” he laments, “Every superhero needs a villain. I am the villain.” Trails of evil laughter fill the room.

The last savoury of 7-day aged duck offers a pleasing enough whack of unctuous fat sided with celeriac and brushed with coffee sauce to form a weirdly complex combination that intrigues and excites. Consider the full potential of German cuisine realised right at this moment.

Hedonism sets in swiftly after a ruby red Austrian Blaufränkisch. We (with Thomas Sühring in tow) head up to the living room and there is a sense of belonging when Gaggan dives into his vinyl collection. I hummed to my choice of Camille Saint-Saëns’s Mon Cœur à ta voix crooning majestically. Amy Winehouse’s beguiling voice comes on next, and out pops the Compass Box The Circus Blended Whisky. Gaggan is quick to pour himself a double. There is never a dull moment when you hang loose with Gaggan, and you can be sure that alcohol is involved.

Alcohol is the keyword here. The party winds up at a whimsical Tiki bar, Tropic City. “Are you ready to burn down the bar?” This is his metaphorical way of describing a ‘lit’ night out, sending instant shudders down my spine. After all, Gaggan has quite the reputation for unfettered thoughts when it comes to party plans. Yet, ironically, it starts with a peaceful nap on the sofa, as late nights and long service leave him knackered.

Gaggan introduces me to bar owner Sebastien de la Cruz, and subsequently through him, I meet Sophana Zona Tanmanatragul (Editor of ELLE Bangkok) and Sii Eawskul (owner of LuxuryHunt.com). The bearded social butterfly immediately goes to work, teasing conversations and gregarious laughter from his audience. It’s as easy as an organism finding its place in its natural habitat. Still, I can only admire Gaggan’s ability to fraternise with just about anyone. For what it’s worth, he has an enormous heart, one that silently accepts my flaws and finds intrigue in my eyes and my simplicity. With compliments tossed my way that night, especially from a rockstar chef, I smile feeling full of pep. Semi-charmed kind of life, as they say.