A Trip to Champagne to Uncover Grower Champagnes 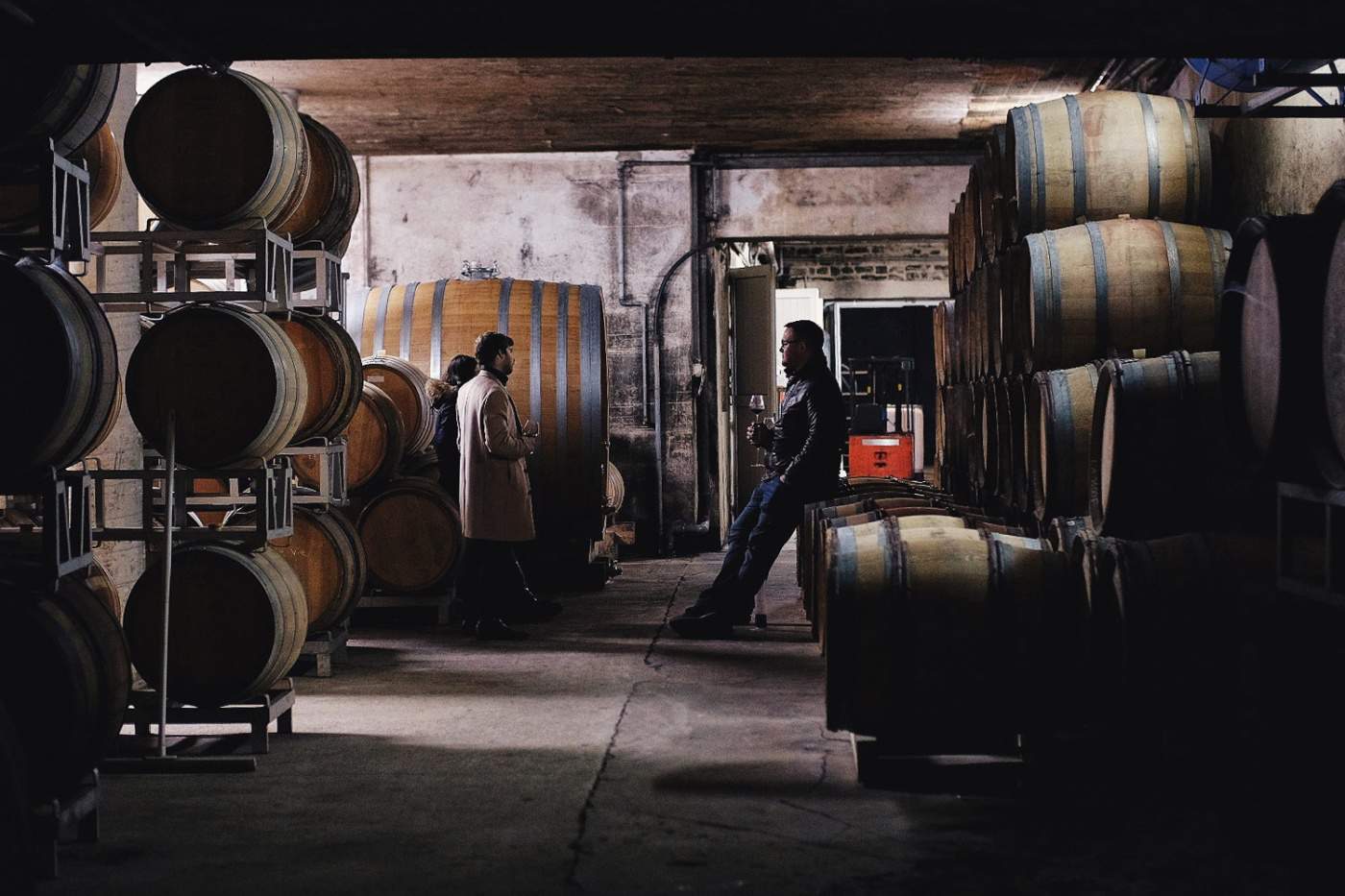 It’s raining like a pissing cow (Il pleut comme vache qui pisse), as the French so eloquently put it. The fir tree in our backyard is creaking and bending into positions I deem impossible to achieve even in my yoga attire. That, combined with temperatures hovering around zero degrees Celsius make it easy to break the ‘Dry January’ vow and reach for a bottle. Instead, here I am, barely discernible underneath a pile of woollen blankets, nursing a cup of coffee combined with black tea and milk—yuanyang-style. Seeing as how much liquor I had ingested in December—I blame it on the pandemic, birthday celebrations and that faithful trip to Champagne—voluntary sobriety in January seems like a good dose of wholesomeness.

In normal times, a trip to Champagne would be unfathomable for a city slinger like myself. But since normalcy has been tossed out the window these days, and I knew a Singaporean friend who had the good fortune of marrying a young Champagne grower, I jumped on it. Although Mathieu, my partner of two years, has had flat-out bad experiences with imbibing bubbly, agreed to the short, quasi-romantic weekend trip, just for the sake of ‘getting out.’ Evidently, confinement has been tough on everyone.

Oblivious to the busy schedule of a winemaker, most visitors would ask when is the best time to visit Champagne. “It depends on whether you want to speak with the winemaker,” replies Richie (my Singaporean friend), “barring August and early September, autumn is when Champagne’s landscape is lavished in vivid reds and gold.” Then, there are the big houses that are always open for business. However, if smaller, independent makers known as champagne growers are your order of business, visit from October to December when the harvest is over and winemakers exercise an instinctive glass-to-lip muscle memory.

When I arrived in the southern part of the Aube, I was a wreck due to the tiny roads. I almost didn’t make the entire Famille Moutard winery and distillery tour had it not been for a ‘hair of the dog’ tipple of brut nature that was poured at lunch. The 1986 vintage Champagne from the family’s private collection tasted like a sweet victory of a successful gamble. Technically, the government’s 12-hour curfew was made to discourage internal travel in an attempt to limit contagions, but that wasn’t about to deter me. Hosts and friends, Richie and Victor attended to that thirst religiously. Bubbly with a side of pain au chocolate for breakfast was not out of the picture.

Champagne was shaping out to be the best idea I had conceived in 2020. Since most of us wouldn’t have had the chance to go anywhere at all, I relished the fact that we were nursing our champagne flutes in 2-degree Celsius weather outside, without haste.

Growing up in Singapore, champagne was always marketed as prestigious and my interaction had been limited by ‘brandwashing’ from the bigger houses like Veuve Clicquot and Moët & Chandon (as the industry standard) till my career in writing about F&B begun. I still recall my first taste of Vincent Couche’s Sensation Millesimé, a hazy tangle of lemons, wet forest floor and fresh brioche. I was enamoured.

These champagne associations are common in Singapore, normally lumped together with the rest of the sparkling cohort like franciacorta, cava, prosecco and crémant. I’m not here to throw shade on the rest of variations, but I’m here to advocate champagne’s pedigree and heritage. After all, the appellation–Champagne—is not only bound by locality (outside of the Champagne region, even French sparkling wine is known as Crémant) but also by the process in which it is made, Methode Traditionnelle. I won’t go into the details, but it involves a second fermentation that takes place in the bottle itself. As you can imagine, removing the sediments becomes a long, tedious process and time is money.

The trip to Champagne was a steep learning curve in understanding ‘grower champagne’—a new buzzword that comes on the wave of the natural wine movement. Grape-growing families in the region have been selling their harvest to the highest bidders from the larger houses for decades, profiteering off inflated market prices. Yet, a rebel trend has been brewing, steering young minds to make and market champagne under their own labels, from grapes sourced and processed on their own plots.

Champagne Laculle is one of the renegades. Born into a family of third-generation grape juice makers, Victor Laculle together with his brother Edouard decided to build on their wine-making experience in 2011. We visited the private showroom, set in the basement cave of his dad’s home where the low arched ceilings provided a roof over our 10 a.m. shady dealings of brut premier and blanc de noirs; the latter being tremendously rich yet versatile made from 100 per cent pinot noir.

Slightly buzzed, the next pit stop was the Moutard distillery for a surprise lunch. Reinstated in the 19th century by the family, production of fruit eau-de-vie and fine champenoise brandy has been in full swing ever since. As spirits enthusiasts, the facility proved to be a playground, seeing that the inside was bustling with energy and activity. Before we knew it, the brothers start pulling aluminium foil-wrapped packages from the steamed and macerated grapes. It was like a scene straight out of a Munchies spread: a long picnic table stocked with extra cheese and bread pressed up next to warm copper stills, green bottles of Bourgogne and other cépages with details that were lost on me—the moment we started our drinking endeavours before noon. Lunch was a motley crew of andouillette (pig intestine and tripe sausage) stuffed with local cheese, potatoes and chablis from the family’s estate. Warm and luxuriating in the lingering humidity, I took my first bite and knew I had struck gold.

That afternoon (and the one before), we visited a succession of cellars run by friends in the same precarious situation—all clamouring for the spotlight which has been dominated by houses that thrive on economies of scale. The tenacity of each young grower (also known as negociant manipulant) to build a connection between the product and the terroir was awe-inspiring, like Champagne Eric Legrand, which owns 12 hectares of vine consisting of 25 different plots. They vinify all their single plots separately in barrels to help pinpoint special traits that would aid in the blending process. Bardiau Champagne run by sustainable viticulturist Jeremy Bardiau was founded in 2015, and carry only three cuvées in their arsenal. The 100 per cent chardonnay blanc de blancs layered with pear, kaffir lime and oxidative honey notes was superb. Jean Sandrin shouldn’t be taken lightly too. The family’s underground tunnel has a formidable wall of champagne bottles—60,000 in strength, taking two people two weeks to lay down.

At the end of two days, we indulged in raclette cheese doused over potatoes, pickles and charcuterie, along with pieces of baguette for dinner, and had a late-night session of beef rendang, chicken curry and homemade roti prata that I threw together in an attempt to honour my fellow Singaporean host. All this enjoyed with champagne, of course.

Ultimately, the question is not what or who is better, but what you prefer. In my opinion, the casually dressed young winemakers clad in boots caked in mud fresh off the fields, windswept hair and passion in their eyes with a coupe of champagne for you—reflects the conviviality of the drink, not the snobbery.