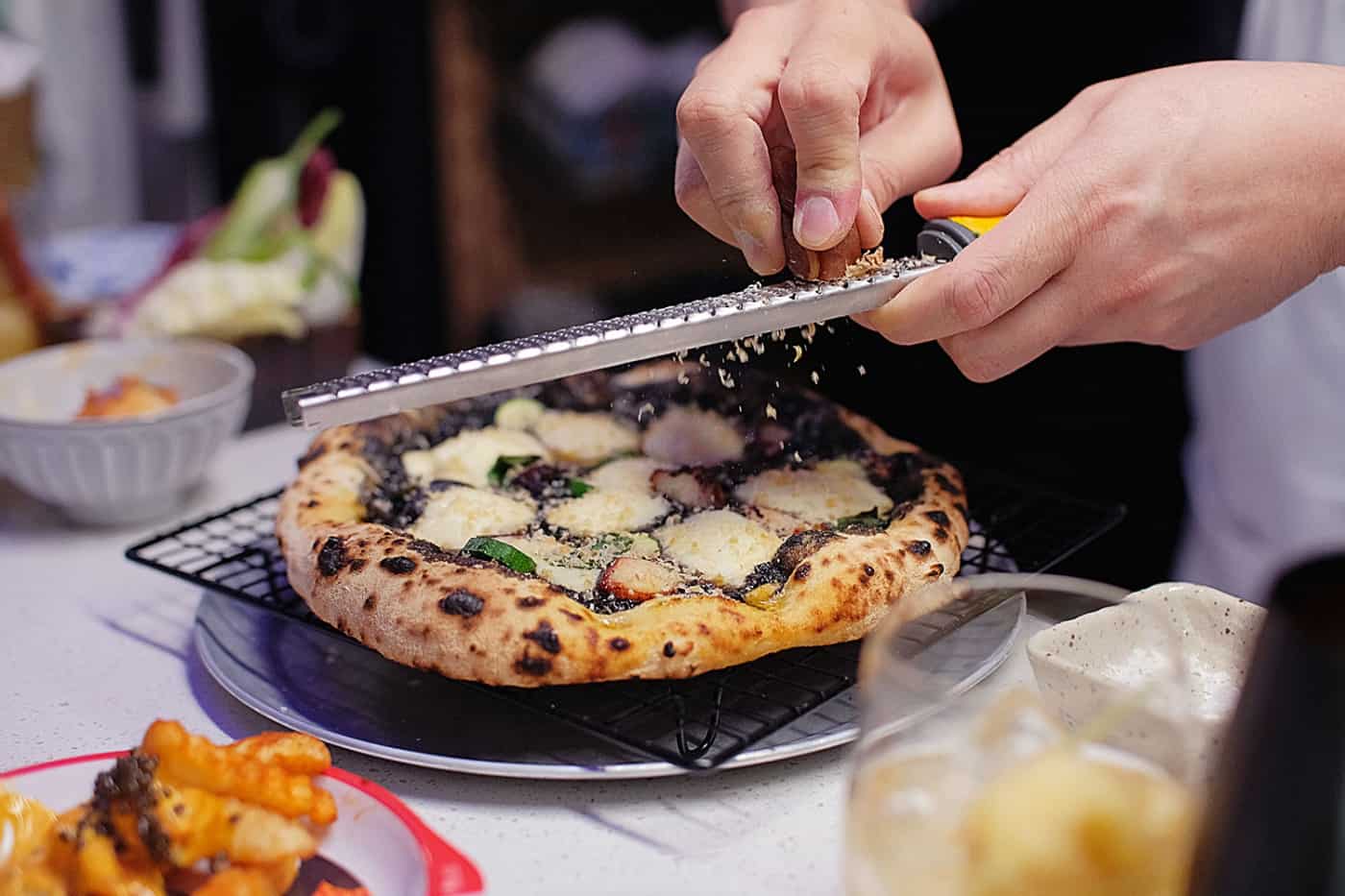 A decade ago, Artichoke, a Middle Eastern-inspired restaurant was a remarkable catalyst that caused an influx of foreign-inspired cuisines to take root. Over the years, chef-owner Bjorn Shen’s unconventional ways have manifested in various forms over different mediums, each no less colourful than the other. From spearheading now-defunct (but oh-so-good) fried chicken haven Bird Bird, to publishing a monthly ‘Bjorn Says’ column in Time Out, to judging dishes on MasterChef Singapore—suffice it to say, Bjorn is very passionate about relaying his food obsessions.

So when he launched Small’s, an incubator to test-bed his food concepts, it didn’t take us by surprise to see that he had converted his previous work dungeon into a 4-seater room to stuff people with carbs. What amazes me, is how his love for pizza has translated into an entire 12-course menu complete with 80s and 90s throwbacks. Hot wings from Pizza Hut? Melted cheese-stuffed crusts? Yes, yes, yes. The playlist is remarkably consistent with the theme too.

As told by Bjorn, the pizza omakase idea was quick to amass haters. ‘Douche’ was the exact word used. In fact, I was a bit of a sceptic at first. But his brassy approach is more than just an overpriced, glorious carb-fest, it is an ode to a full-fledged pizza experience with the ins-and-outs, like an intimate discovery of the glorious pie. It’s a home run in his tiny shack, especially when it plays on nostalgia.

And since I grew up with a huge extended family in the 90s, I had my fair share of occasional pizza blow-out parties where I recall putting on a brave front when I got a slice of Hawaiian. Evidently, I was extremely primed for this.

Caesar’s Salad. That’s what inspired the first veggie dip of Bagna Cauda, an Italian staple that blends anchovies and garlic and oil into a glorious paste, littered with sakura ebi for a boost of umami. The dip, as one would suspect from the list of ingredients, is astoundingly comforting. In between courses, Bjorn deftly works the high hydration dough into the oven, rimming it a little underneath the grill, before asphyxiating the blistered and puffed up disc under cling film. He also talks about his obsession with Neapolitan pizza and the inception of his 4-day aged dough, which if provoked past 6 days becomes a weird, unstructured mess. Such is the volatility of the yeast, and hence the mastery required to subdue it.

At this point, you’re in a roomful of four strangers in close proximity, with thoughts so loud, you can hear them: “I really hope the pizzas are good, I’ve starved the entire day for this.” Hunger is quickly resolved with  ‘garlic bread’ fashioned from Bjorn’s plain dough pizza scattered with confit garlic and a colourful salad of heirloom tomatoes tossed in a kombu sauce, hijiki and pine nuts. Keep that around if you feel like being good to your body.

“A play on parma ham and melon,” Bjorn says, as he delivers a dish of cured amberjack wrapped around musk melon. It’s a trattoria dish dressed in a bespoke suit. What comes next is chicken backsides tossed in spicy wildflower honey, providing a very faint but much more rousing impression of buffalo wings.

Pro tip: ladies, stretchy pants and billowing dresses are highly recommended. About half the crowd is strictly here for comfort food—and Bjorn delivers with aplomb and a wittiness that will amuse you. The visionary dude-food chef sews crinkle cut chips straight out of a bag, Yunnan ‘black gold’ beluga caviar and uni crema together, before laying it out on a cheap Daiso Minnie Mouse plate. It’s all very provocative and stupidly fun. Tom Jones croons “Sex Bomb”, while you surrender yourself to the precarious fate of sticky fingers and bunched up tissues.

Pizzas follow swiftly but not without a little bit of sentimental storytelling first. Paying homage to the first squid ink margarita pizza he had in Japan that changed his life, Bjorn blankets the pillowy dough with shovels of squid ink, baby zucchini and confit octopus. The pizza emerges positively soupy, showered in shaved octopus bottarga. It’s your childhood pizza fantasy, but in a grown-up form. There’s a surprise in store for crust abandoners (guilty, as charged); a dirty board of prawn butter, nutritional yeast and black winter truffle will ensure that no crust is left behind.

Watching Bjorn work that pizza will fill you with an undeniable urge to try your hand at it, too. The tender dough practically plopping itself gracefully out of the square tupperware and with just a few nudges from his graceful fingers, it is coaxed rather than manipulated into a circle. Be grateful, you’ve got your own personal pizza chef for the night. The Vongole pizza is next in line to change your mind about seafood on bread discs. Sweet clams from Lombok are cooked in white wine and mounted on the pie, which is then finished with scallion oil and crispy pork lard—it’s an ephemeral experience.

If you have a hidden stomach, now’s the time to utilise it. Nothing will quite prepare you for the hefty, satisfying bruiser that is the Pizza Banh Mi. A napkin-shaped Hot Pocket stuffed with pickled vegetables, Italian mortadella, Vietnamese ‘spam’, grilled kurobuta pork collar, pate mayo, sprigs of mint and spring onion, is made to resemble a swaddled baby. I literally don’t have room to rhapsodise any longer. I copped out, took the majority of it home, ravished it in front of the tele later that evening, with a whisky soda in hand, and called it a day.

Dessert is a full-fat affair of fudgy hot chocolate cookie with an entire cup of Wall’s vanilla ice cream decked on top. It’s a never-ending rabbit hole of sugar high for the sweet tooth. Naysayers aside, Small’s is succeeding at filling the gap between casual dining and the hotly demanded private chef-ing, by raising their prices. I must admit, $650++ for a group of 4 is a hefty price to pay upfront for pizza omakase. However, if I were to look at it as an opportunity to return to pizza innocence—with Marvin Gaye booming over the sound system, alongside cheap and cheerful plating, and significantly tastier pizzas—I believe there’s an appeal there.