Dehesa: The Place for Secret Lovers and Mischievous (Food) Affairs 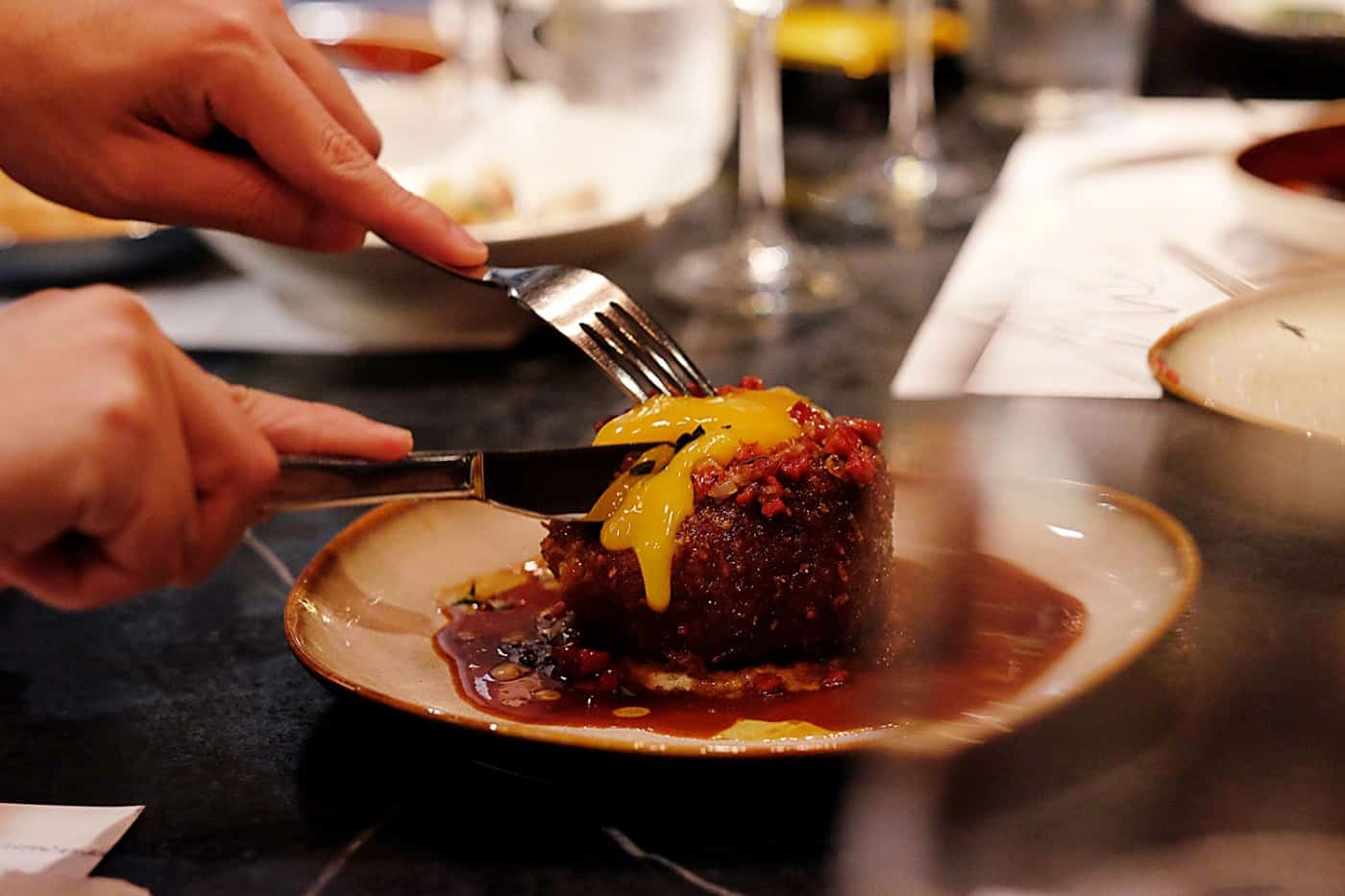 I’ll tell you something, there aren’t many problems that can’t be solved with a hearty meal of meat-centric delights. At least that’s what I’m telling myself lately. My carnivorous thirsts have propelled me to hunt down a few establishments around town that know their way around satisfying those hankerings. And Dehesa on North Canal Road is one of them. A meal there, no matter how civilised it begins, will always end off in jovial banter and amicable ruckus, opening up the gates of hell for wild revelry later.

Chef and Owner Jean-Philippe Patruno is a character in and out of the kitchen. Despite his impressive credentials, previously helming Fino, Barrafina and then historic Soho restaurant, Quo Vadis, this humble cook isn’t hell-bent on dishing out prim and proper—choosing instead to pour out his passion into food from the crypt. And its nothing less than a breath of fresh air.

Previously known for nose-to-tail dining, the menu at Dehesa has undergone a sexy yet understated makeover that translates to bigger, bolder flavours with generous plates. Needless to say, the focus of Chef Jean-Philippe’s culinary vision still lies in the alternative cuts, and its presence is ominous throughout the menu. It’s not vive la différence, but a good alternative suited for small group dining.

He kicks things off the Pimientos de Padron—these humble charred peppers heavily scorched and perked up with a sprinkling of sea salt inspire confidence in the rest of the meal. The meal continues in sweet coherence with strikingly hot and creamy Croquetas, there’s a consistent weighting of acidity in this dish, salty jamon pitting itself against garlicky aioli. You begin to lust for that bit of spirited lubrication, and aid comes in the form of a full-bodied Argentinian malbec which guides the soulful mix of heavyweight flavours into the palate’s dictionary—slinking its way slowly into the heart.

A show-stopping plate of Grilled Octopus draped with sheets of translucent lard and torched till droopy around the edges is both cheffy and immaculately successful at the same time. The amicable selection of red wine by the glass is programmed to ensure that it matches the meal. The warm, earthy flavours evoking ideals of Latin romance, rarely at loggerheads with the robust dishes.

Classic beachside seafood is given a fancy twist with the addition of sherry. It’s a play on the usual Spanish tapas of gambas al ajillo, albeit the liquor intervention approaching the palate like a comforting embrace. We want bread with this course.

In most parts, Dehesa yields a moderately ‘dirty’ feel with grungy underground vibes that compel you, the diner to keep it a secret. Presaging a harsher reality in a normal mollycoddled life, I singlehandedly witnessed a regular bringing two different ladies to the venue on two different occasions—one of them, a pescatarian and the other a hardcore red meat junkie. Pardon my manners (or lack thereof), I couldn’t help but stare. He obviously had it all figured out. A spot this good for both its seafood and meat dishes would be an anomaly. In Singapore, it makes for a rare species of triumphant case studies and it does so with fervour, made even better with a list of utilitarian wines most of which are available by the glass or the affordably priced bottle.

Yet another stunning dish from Chef Jean-Philippe’s repertoire is his Crispy Pig’s Head. Nose-to-tail dining comes to life here and with this, he challenges the social stigma that offals are a poor man’s food. It’s not. The change of economy in the 80s just meant that these off-cuts fell out of fashion and people were more willing to spend their bottom dollar on luxurious cuts. Despite the trend making a comeback, that and our fervent love for the local dish kway chap, it’s hard to see this style of rustic cooking being bested round here. One can only try so hard. I am a huge fan of the sexy flavours and textures combined under one convenient culinary roof—braised till agonisingly tender, the off-cut sings a harmonious tune with chorizo, capers and lashings of soft yolk. You can barely sit through the entire introduction before repeated spoonfuls make a beeline for your mouth.

Second to the best is the extravagant plate of Tender Ox Cheek glazed with Oloroso sherry. So you’re seeking out a spoon in an attempt to gregariously scrape all the oleaginous bits from the deep dark crevice of the accompanying bone marrow? You’re not alone. Meltingly soft but densely textured, and sporting an even more sophisticated flavour profile, this dish is quite insanely delicious, even without the splodge of romance-killing Spanish onion puree.

And finally, the Squid Arroz; tender baby octopus pressed into a bed of creamy black squid ink paella. If you think you’ve had good paella, you’ve just touched the tip of the iceberg; that is till you’ve been enlightened by Dehesa’s rendition. All that shellfish reduced to its essence bringing a huge umami boost to the creamy grains. The bottom edges crispened just that slight bit to incite excitement. The generous array of giant prawns, clams and octopus providing abrasive flavours that provide a creative space for the lavishness of the dish to do lewd flavour acrobatics in your mouth.

Dinner cumulates with visual theatrics to boot, after a seemingly mild but no less delicious Gin Panna Cotta. It panders to the likes of the alcohol-inspired throngs, rich with floral nuances from the gin employed which is further accentuated with a lush berry compote and toasted notes of almond crumble. I picked away the caramelised walnuts with reckless abandon, much to the delight of my dinner companion who had fallen hard for the soft set custard layer beneath. As petit fours, Chef Jean-Philippe conjures up the kind of ceiling-high fire beloved by kids and pyromaniacs. Neat cubes of homemade raspberry liquor-fuelled marshmallows are torched in cognac perfumed flames, acquiring a blackened blistered exterior. Devouring these sugary pillows, still warm and sticky on the outside, is tantamount to a religious experience. They don’t make marshmallows like this anymore.

Culture
Cynthia Chua Opens Up About Body Positivity, Past Struggles, and How To Build a Lifestyle Empire
Insights
How to Work From Home (and Still Be Productive)
Style
5 Belts That Are an Asset to Your Wardrobe
Style
Style Guide: Formal Wear With A Twist
Style
Tom Ford’s New Private Blend Rose Prick Candle