The enchantment begins the moment you walk through the large wooden panelled flip doors into a spacious facade decked out in modern aesthetics—teak furniture, plant installations in minimalist dosages, just enough to induce a tranquil effect, and glass windows all around its peripherals that offer panoramic views of the city. At dusk, the chaos and discomfort from the sweltering streets below, is muted and dulled down into a discotheque bokeh of bright lights that accentuate the dining experience in Entier. It’s magical, and it was also my prime choice for an anniversary dinner with the better half when faced with a bevy of choices in Kuala Lumpur.

Being a city that prides itself on diversity, this can result in a somewhat frustrating experience. Price discrepancies can swing the whole nine yards without so much as a worth-it pay off in terms of marginal utility. In many cases, you’re better off bracing the heat for a bowl of chili pan mee and pay peanuts, then an arm and a leg you’re about to sacrifice for the momentary gratification of a fine dining experience. Entier, located in on the 41st floor of the new swanky luxury living quarters of Alila Bangsar takes on that prosperous image, bolstered by the sweeping views of the city and stellar wine lists. Fortunately, on closer inspection of the menu, this is French cooking in its most humble state—selling a nose-to-tail culinary approach that encourages minimal wastage and innovative technique to harvest the best qualities of the ingredients. It’s dangerously ballsy, but Executive Chef Masashi Hourichi has big cojones: the move in filled the dining room on a taciturn Tuesday night and had the crowd rallying for more tripe.

To say that Entier is one of the most anticipated openings for me, in the year 2018, would be a sheer understatement. The Executive Chef is Masashi Horiuchi who previously consulted for some of my all-time favourite restaurants in Singapore like Shelter in the woods, Verre and Sakurazaka prior to slaving in the kitchens of Joel Robuchon in London for 5 years. This may explain why the French finesse in most dishes, despite its communal settings are predominant. Food value wise, most of the small plates are priced between $8 and 12 Singapore Dollars, medium plates are $14 to 20 Singapore Dollars, and the large plates (recommended for 4 pax) adding to the high hundreds for large-scale meat or fish (think Josper grilled dry aged prime rib and salt crusted roasted whole spring chicken). Diners that strut in pairs are advised to share 2 small and 2 medium plates for variation and optimal enjoyment.

We begin with a basket of their house-baked bread accompanied with a puck of Kombu butter on a dish stabbed by a wooden knife that served no purpose besides encouraging graceful dining—one bite in and you’ll be throwing all mannerisms out the door. For a split second, your supposed ‘date’ across the table is viewed as a butter competitor. It’s that good. Ask for an extra knob of butter if you dare.

Our first foray into ‘off-cuts’ for the night also turned out to be the most memorable. The Beef Honeycomb tripe is presented two ways: crispy and braised—a double threat of textures that melds in one amazing amalgamation on a plate bolstered by a rich honeycomb tripe jus. To cut through the richness, there are plump cherry tomatoes and a burst of raw pepper from betel leaf.

Judging from the exotic menu that will have you mulling over for quite some time, Chef Masashi is a chef’s chef who doesn’t pander to trends or fads, hence the line-up of rustic French food that highlight the rare oddball of an ingredient. Take the Chicken Wing, not typically a part found in a fine dining setting,  fashioned into a ball, crumbed and deep fried, bathed in basquise capsicum sauce and garnished with parmesan and chicken skin crisps. It’s sublime and incredibly inventive.

The beverage menu is a thoughtful mix of cocktails and wines which work synonymously with nose-to-tail cuisine. No one country is favoured here; there are Australian, Italian, Spanish, French and American wines to suit all palates. To celebrate the occasion, we ordered the Chateau Real Cauillou Lalande-de-Pomerol—a medium bodied bordeaux sporting hints of mocha and dried black fruit. It’s residual spice acting as the willing bride to most of the meat courses. There are no obligations here, but given the luxurious settings, it sure builds the liquid appetite. 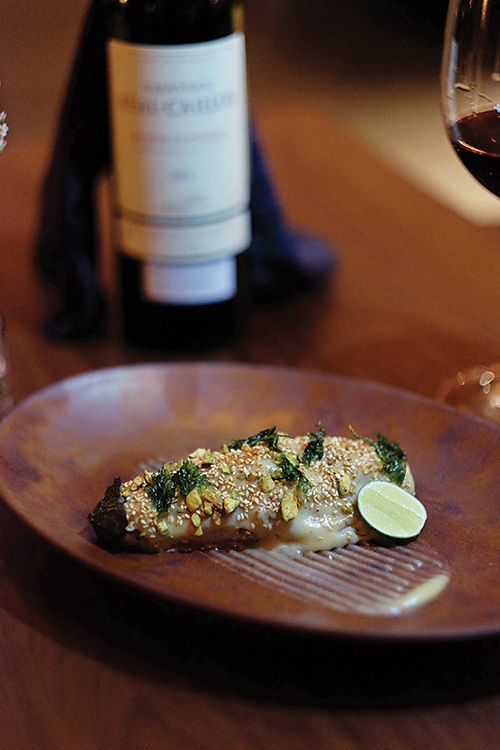 The only vegetable dish we tried is the Eggplant. It is grilled over the josper grill, lathered with saikyo miso cream and sprinkled with pistachio dukkha. The smokiness of the eggplant and the acidity from the lime dance happily. Sure, it ain’t a dish made to be photographed but it is designed to be fabulous to eat. 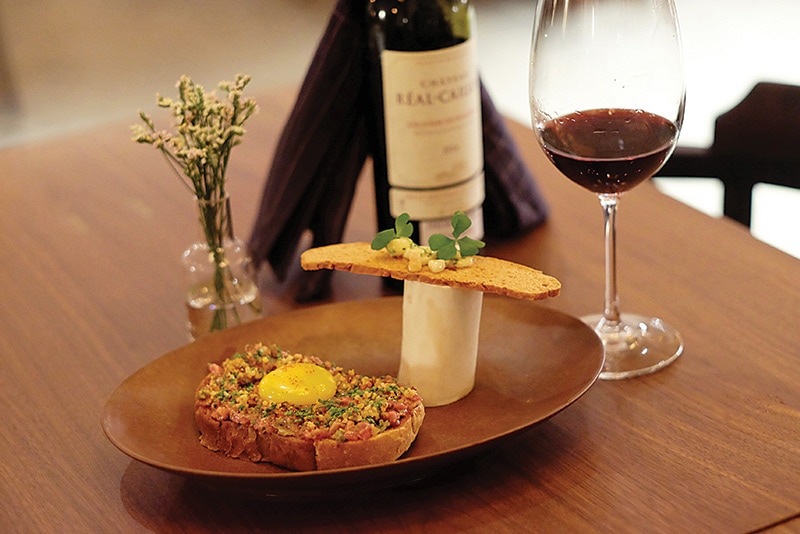 A dish of Bone Marrow and Flank was a bit of a miss. The bone marrow had a nice charred inclination while the flank steak tartare luxuriates in egg yolk confit. But the side by side presentation of the separate entities was incongruous and I wished that more thought had been placed into the consumption process.

From the lamb section of the menu, we had the Australian Lamb Belly, coaxed into shreddable tenderness through arduous cooking methods. It’s exuberant flavour enhanced with a sticky dark miso glaze. What’s striking is the herb salad the rich protein was paired with, thistles of greens teased with just the right amount of citrus dressing provides a herbaceous edge and sums up the dish with more pronounced Asian influences.

We ate and fed at slightly too quick a pace as determined by the kitchen’s need to live up to the sharing plates or communal dining style, clearly forgetting that there were two leisurely diners at the table. Staff were eager to please, perhaps too eager—and they circled the table like vultures, committing repeated visits to the table in a bid to clear our last spoonful of tripe, which I took to great lengths to reserve for that parting jolting memory. Sure, I was annoyed but I sucked it up to preserve my ‘demure’ nature. Just when we thought it was over, the menu and its preceding successes convinced me to revisit it. Therefore the bonus savoury course before the sweet endings, the Liver, Heart and Skin highlighted generous dolls of filthily good liver pate and sautéed chicken hearts with sourdough crisps and crispy chicken skin as crunch mercenaries. It’s visually stunning and perhaps one of the best iteration we’ve had of this ubiquitous dish.

Anyone who knows Chef Masashi will know that he is quite the pedantic maestro when it comes to pastry. A quick glance through the short dessert menu and the attraction was instantaneous. We crammed in spoonfuls of the Milk dessert which strangely highlighted house-made beancurd as its base component alongside barely sweetened chantilly, goats milk sorbet, strawberry and rhubarb compote. It results in a chaotic swirl of vivid colours across the bowl that you won’t hesitate to lap up. I tried a spoonful of the Lemon creme brûlée and got thrown a curveball by its crowning glory of Basil ice cream that proved a little too vegetal and refreshing for my liking. Had the caramelised sugar layer been pushed more into a bitter territory, that would have tied up the loose ends.

Let’s be realistic. Pricing here is pure bliss on the wallet as compared to most Singaporean establishments of equal footing. Sure, there aren’t outbreaks of luxury ingredients which I honestly find a distraction and more often than not, a scapegoat for the justification of ridiculously exorbitant bills. In Entier, the ingredients make a case for themselves. Instead of hiding in mock pageantry of expensive produce, revel instead in the expertly manipulated plates that have tougher secondary cuts as lead stars. Save to say, with just 3 weeks under its belts, not all the dishes at the restaurant are stellar. But rest assured, you’ll be fed very well. With a little patience, this space is worth watching.

Trendsetters
Violet Lim
Bonds
Mom and Pop Investors Will Rule The World
Insights
FaceApp Fiasco: How Much Do We Care About Our Privacy?
Style
Go BOLD: The Latest Make Up Trends
High Profiles
Elizabeth Tan