Filling You In On The Saucy Details At Pasta Bar 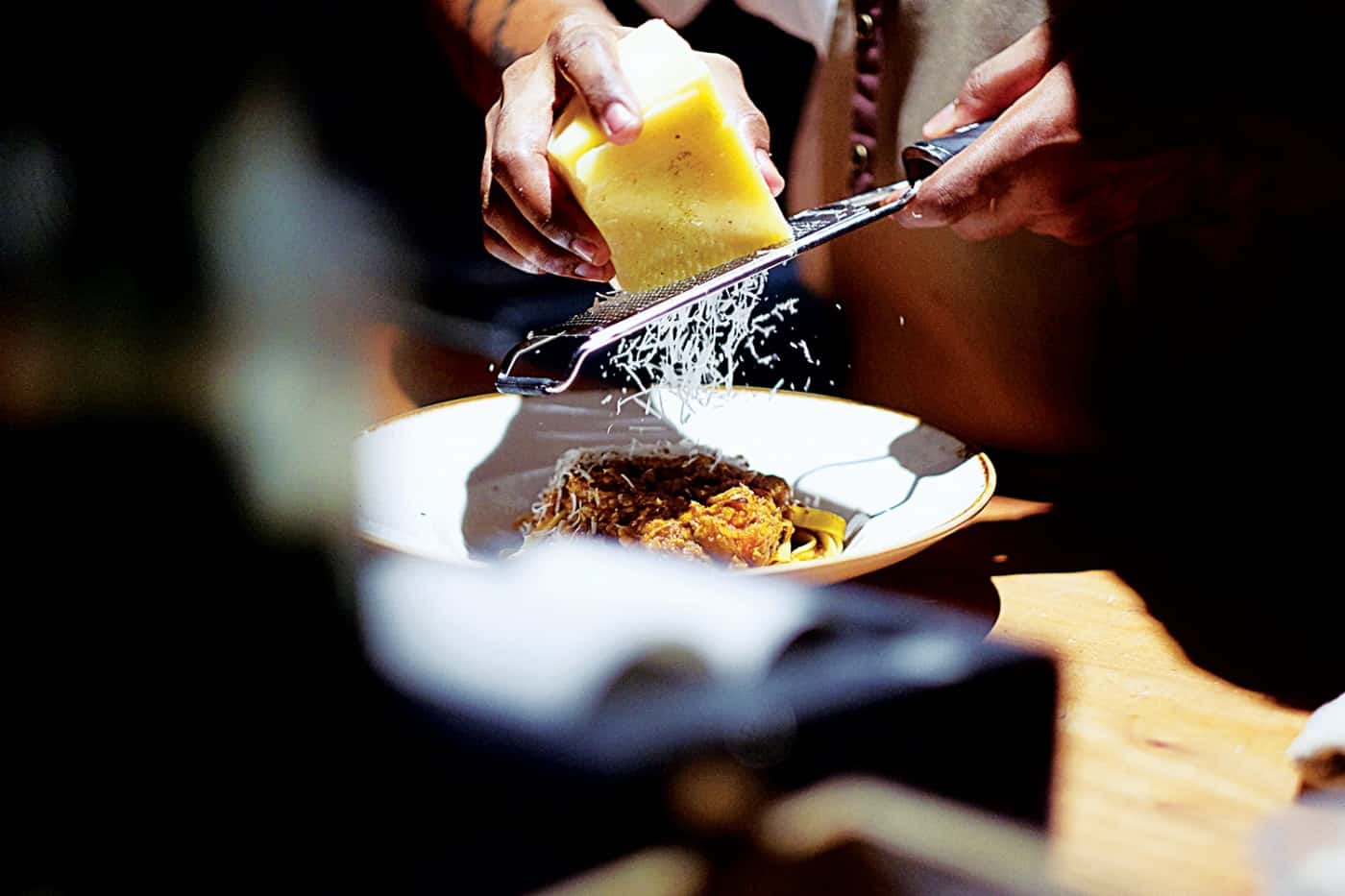 For starters, Pasta Bar has got its work cut out for it. The name alone is straightforward enough and doesn’t shy away from boasting its offerings. Yet, its intentions are much meeker, benevolent even. Introducing the fine art of various dough to water and egg ratios in order to achieve an accurate representation of the regionality and diversity of Italian pastas.

It’s a mammoth task and evidently fruitful the instant your host marvels at the empty plate that results from you inhaling his recommendation—Chef Giustetti’s grandma’s rabbit ragu with reginette pasta—initially done with much reservation due to most patrons’ adverse reaction to its salt levels. Yet, we found the challenge at best, divisive, and to our salty palate’s advantage.

Top marks all around for the kitschy vintage styling from the weathered exposed red brick wall, old Cinzano posters, to large pickling jars overhead and racks of swaying dried pasta fuelling the appetite. The white doors open up to an 18-seater open kitchen bar counter, the beating heart of the operation. Once seated, the theatrics, aromas aloft and occasional hazardous flick of cream sauce in the air prove to be a show of one’s hand; pasta cooking rigorously away on the 8-burner stove, wine bottles being uncorked relentless. It’s a scene, aight.

We were given two mini servings of Buffalo Milk Ricotta, rippled with homemade herb pesto and honey to whet the appetite. It does the trick of priming the palate for the inherently salty meal ahead. The Arrosticini (grilled lamb skewers) came served in a traditional terracotta pot ruled back from Abruzzo, playing second, no third fiddle, to the other leading stars throughout the meal and were in dire need of some lemon for acidic ballast. A meat lover’s mirage of Veal Tongue arrives with salsa verde and pickled vegetables, none of which were left behind. It’s cooking that champions servicing the classics instead of reinventing the wheel, and putting Piedmontese bollita con salsa verde on the pedestal.

Carbalicious kicks take centre stage (as they should) with the Fettuccini with Truffle Butter tucked in by a thin blanket of shaved truffle and parmigiana cheese. Aesthetics are simple, if not fundamentally gratifying. Generous portions of noodles cooked to a point just past al dente, and sauce fortified with a bit of butter, a touch of sharp cheese and a healthy pinch of salt. Sometimes just flour, water and salt are snuck into the mix, like the rustic Lagane, based on one of the oldest known pasta recipes from the south of Italy. Legumes in the form of chickpeas contribute just as much nutrients as they do to create a luscious texture. The wintry dish is lifted with spicy garlic and occasional spikes of heat from the chilli. It’s brilliant and it might just slip your mind that the eggless pasta dish is vegan. Life is good.

You will probably want to visit the wines here, which include wallet-friendly pours by the glass such as the Super Tuscan, a racy fruit bomb with a strong backbone of cedar and tar, suggesting some serious ageing potential in the bottle. Sitting around the kitchen counter can get a little warm, but witnessing the brazen activity happening behind the stoves, sweaty foreheads, and wrist-flicking action; it’s easy to forget about your discomfort. Once you hit the intensely rich amarone with vengeance, glorious times like these are few and far between.

A must-have is the fresh Reginette Pasta ribbons married with rich rabbit ragu, olive brine and fresh olives with a lively scattering of pine nuts. A crunchier toast on the latter would have allowed for the dish to shine brighter, but, the overall result is still splendid. Every bite servicing glazed looks and delirious smiles, an obvious sign of triumph on Chef Alessandro Giustetti’s part, especially since this dish is representative of his Liguria origins.

The restaurant continues belting out the pasta high notes with packages of tortelli stuffed to the brim with pumpkin, sage and Italian amaretti biscuits. The smack of natural sweetness from the pumpkin comes through vividly and it makes the whole affair just a little more saccharine than it should be. At such times, you’ll be glad the restaurant enforces a slightly thicker pasta policy, giving context to the juicy fillings.

Come for the pasta and stay for a dram of in-house Coffee Sambuca or Limoncello. I like to think the restaurant gives it complimentary to its most well-behaved or beautiful guests. And on a languid Sunday night, it works miracles in easing you gently into the new week. Desserts are enormous fat bombs, think fried nutella and Sicilian cannoli filled will sheep’s milk ricotta and chocolate chips. As if the carb loading isn’t enough, the restaurant goes the extra mile with more sugary temptations. Dining at the pasta bar is supposed to be an extravagant affair, just leave your sanctimonious, carb-abstaining self at the door.