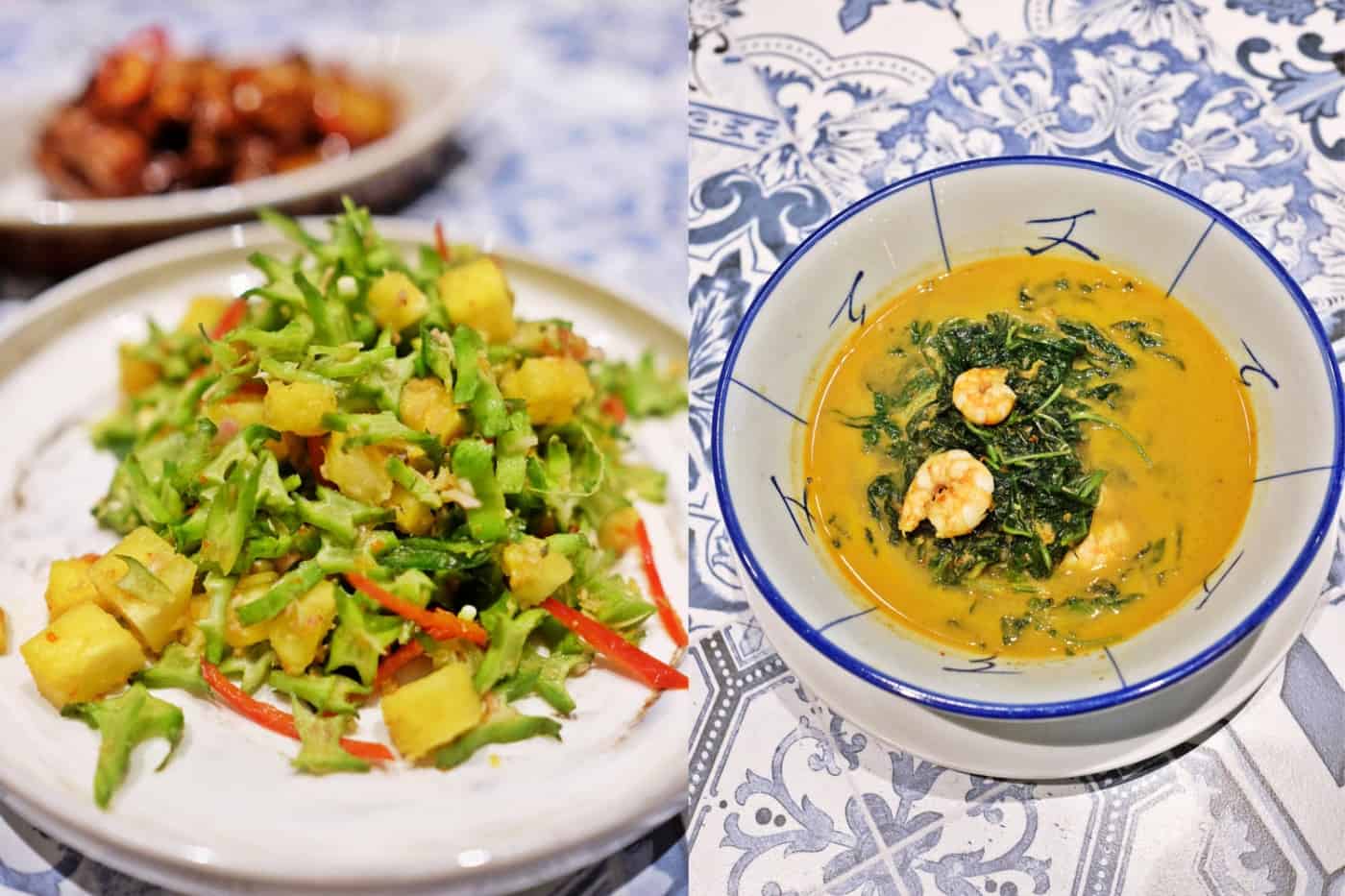 The Hati Babi Bungkus at newly opened Folklore, splices up to reveal a treasure trove of secrets. Minced pork balls are studded with neat cubes of perfectly cooked liver, the entire mix swaddled in caul fat and grilled till gleaming and a shade of African model deep brown. Popular in Malacca and Penang, the dish rarely makes an appearance on Singaporean dining tables, yet several bites in later and you come to acknowledge the certain familiarity bred with its aroma and flavour notes. You nibble on the 4 Angled Bean Salad—it looks deceptively refreshing, but the taste is strong, perhaps a bit spicy for some. Fried Brinjal appears, jazzed up with shrimps, the humble vegetable enrobed in a pungent slurry of sambal perfumed with shallots, shrimp paste and chili.

Folklore sells heritage food, not to be confused with hawker food or zi char. The establishment is one of the many newcomers jumping on the bandwagon of propelling Singaporean cuisine into the modern era—a recurring trend that has emerged after Labyrinth’s successful run for the Michelin star. But to say that Folklore is reproducing local cuisine in new-fangled shapes, would be doing incredible injustice to Chef Damian D’Silva’s lifelong work.

“A lot of people have a strange misconception of what local food is,” D’Silva laments, stopping by the table to check in on his hungry guests. “I’ve been challenging this erred mindset for 17 years now. Heritage cuisine is food that you eat at home. This is what Singapore is about. We cannot lose this.” This genial character looms at the table, his lengthy frame and graceful mannerisms exuding a certain poise and confidence that stems from years of soulful cooking in the kitchen. Speaking of attempts to steal his grandma’s recipes when he was younger and the fond memories of the holy trinity of Peranakan food at every celebration, his eyes sparkle with enthusiasm. If the meal had come with an audiobook of experiences narrated by D’Silva himself, this would go down in the books as the most compelling meal I’ve had this year.

Located at the reception lobby of Destination Singapore Beach Road, vibes are inconsistent with its heritage menu; stacks of colourful suitcases marring the scene of tranquillity. Peranakan-inspired tile patterns embellish table tops and tingkats lining the shelves offer the slightest hint of D’Silva’s traditional inspiration. They could have done better. At lunch, the customers come in ravenous bunches, heaping tender beef rendang over fluffy white rice. A few other tables have chap chye on them too. At first glance, Folklore seems inviting, it’s nostalgic deliverance rubbing off on its guests.

I confess; I was smitten by what Folklore stood for. D’Silva’s firm stance on the importance of passing on culinary heritage to the younger generation propagating through his food. The Singgang, a long-lost Eurasian dish of wolf herring, painstakingly deboned and cooked in a non-spicy paste wins praises around the table. I would have loved toast with that, but to bastardize the dish would be a felony. Sambal Buah Keluak Fried rice may not be the showstopper that it once was at Immigrants (given the more extensive menu), but it was very good—vibrant with chili and the bits of buah keluak nut encrusted rice comes nicely blistered from the wok. A comforting lardaceous dish of Babi Assam is among the more peculiar versions in town. Cinnamon and star anise tamarind gravy replace the usual dark sauce varietal, demonstrating D’Silva’s Eurasian parentage. It’s sticky and impeccable, the flavours clinging to each bite. The Masak Lemak as well as the Chilled Pidan with Tofu are respectable, the latter offering a cooling respite from the cumulated heat amassed from the slew of sambal flecked dishes before.

Should you have space for desserts, finish off your meal with the Kueh Kosui. It’s a simple constitution of gula melaka, rice flour and tapioca starch with freshly grated coconut may make it a bit inconspicuous. However, order it and you’ll reap the rewards of plush pillows that disintegrates at the slightest hint of heat from your tongue. The mouth shattering jolt from quality gula melaka allowing for an earth shattering experience.

Folklore may look ostentatiously casual on the surface, but safe to say, it is an easy place to be happy.