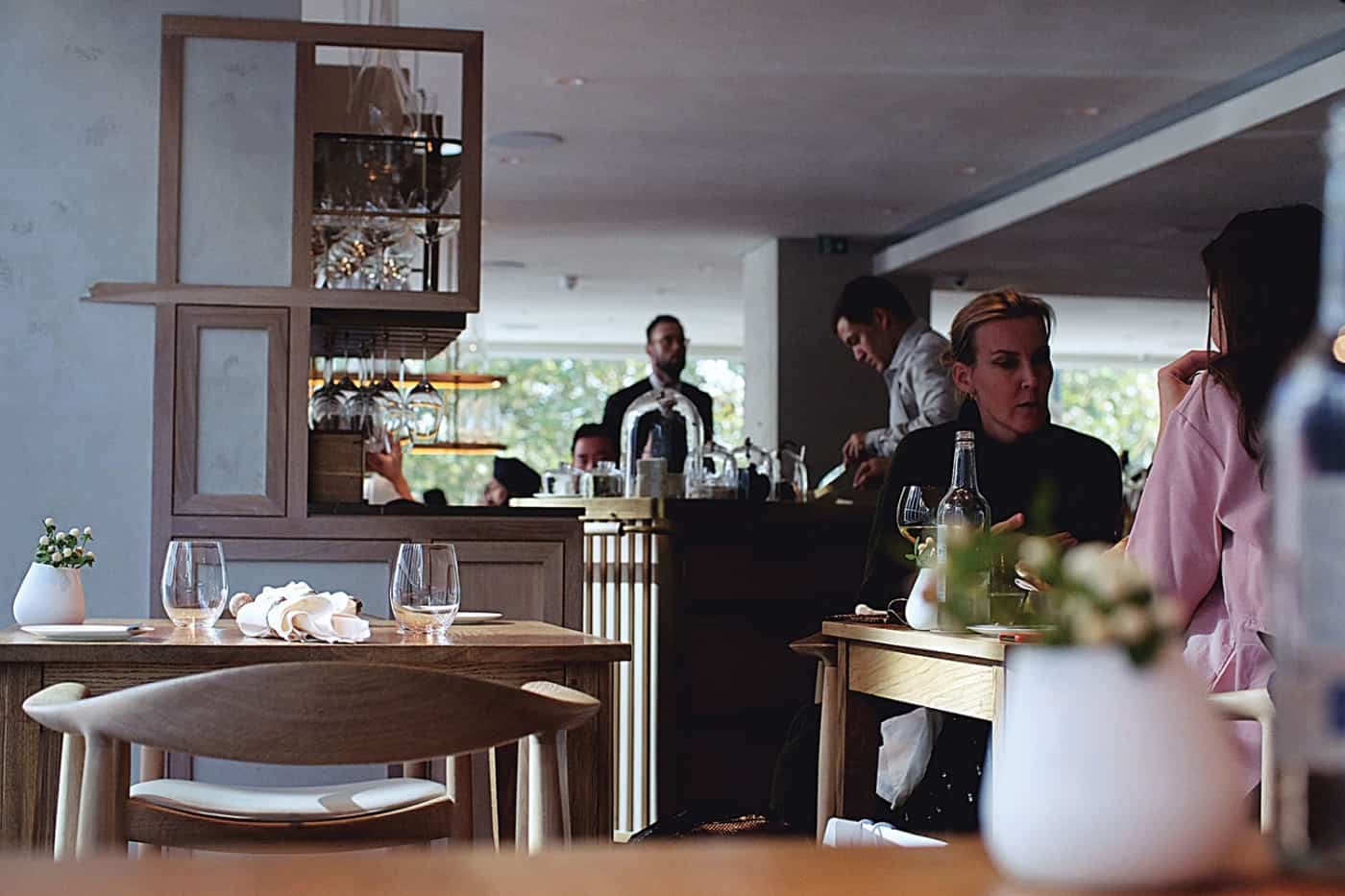 At the shiny, bright and brand new Hide, there is nowhere to hide. I appreciate the satire as I gingerly ascend the breathtaking forest-inspired stairwell to Hide Above—the one architectural detail that I fathom Maleficent would approve. It’s a stunning space that is naturally lit by the surrounding floor-to-ceiling windows. Embarking on a solo dining expedition, and booking in advance, did have some respectable benefits—my table’s position allowed glimpses of the lush Green Park and obscure side alley action playing out below. Waiters, managers and the sommelier meander the floors with a certain light-footedness that ties in with the elegance of the airy space.

You are promised a ‘light, elegant and pure’ meal, and the 4-course set lunch menu reads as such; the definite absence of heavier cuts of protein as main course options hit the nail on the head where the concept is concerned. Chef Ollie Dabbous is the wunderkind chef behind this madness, his tenacity in the culinary world and flair for seasonal cooking attract a broad spectrum of guests from aficionados to fashionable tourists who have heard of its recent 1-Michelin Star accolade.

First up, vegetables, flesh and bone, bread and broth. My mind instantly flashes to the famous scene where Oliver Twist raises his bowl and ask in a piteous quaver, “Please, sir, I want some more”. Except that they didn’t tell you, this humble description is a satirical take on events to unfold. A plate of Crudités accompanied by a bowl of daffodil yellow, Chamomile mayonnaise, skewers of homemade charcuterie on feathers and china bones, a heartwarming bowl of rich mushroom broth, and a bread basket that will absolve you of your carb-free duties. It’s no laborious affair tackling the bread basket, especially when left unsupervised with a dish of swirled hand-churned butter flecked with sea salt. Then there’s the pork neck cured in fenugreek and juniper that is sweetly unctuous, it puts up the fight of a cowering dog that had just been caught red-handedly chewing on its owner’s new designer shoes. Guilt conveyed as guilty pleasures and audible swoons instead.

If you’re one in search of material to browse during the course of lunch, there is an iPad in a drawer of every table that enables you to explore the voluptuous 4000-bottle collection by Hedonism. I did so with mild amusement while nursing a 2017 Vermentini that I had settled on from the more accessible paper list. It’s contemptuous, but it also cements the Michelin star standards of the possible overindulgent dining experiences that are expected to roll out. A champagne trolly gets called to the attention of a couple seated at a nearby table, in celebration of her 40th birthday. It’s classy, and it doesn’t take much of a hard sell to get two flutes of Bruno Paillard Cuvée 75 Extra Brut on the way.

My starter of Warm Hay Custard, Jerusalem artichoke and sage butter was in the good company of the Vermentini. Fresh and fruity with an uplifting palate of tanginess quite similar to gooseberries and lime. The sharpness arising from bouquets of unripened white peach in elegant contrast to the larger-than-life dish of soft set egg custard imbued with unruly tones of hay smoke. Braised Jerusalem artichokes and a generous pour of artichoke veloute go a long way in providing heft, while crunchy toasted hazelnuts elevate the vision with nutty nuances.

It doesn’t take long for the mains to be dished up after the first bowls are cleaned up. Professional tip: You might want to feedback to the staff if you’re set on enjoying a luxurious, unrushed lunch, as meals are always paced to please the blazer touting executive crowds. A glistening slice of Chilean Sea Bass is perched over butter beans, spiny artichokes and rivulets of basil oil spiked veloute. It’s swoon-worthy, buttery and oddly moreish. The sun-dried tomato focaccia from the bread basket earlier is the perfect morsel for a cheeky ‘Fare la scarpetta’. There are no regrets there.

Debate arises between Reunion Island’s most emblematic fruit, the Victoria pineapple or the equally sublime Cheese trolley experience for dessert. The latter comes complete with tableside chutney services. I opted for France’s best pineapple, and it doesn’t disappoint. Lop off the pineapple head to reveal a fluffy pineapple sorbet flecked with kaffir lime leaf. Dig a little deeper and you’ll discover the acidic hits of a warm pineapple compote drizzled with a dud of rum for additional complexity. Just imagine how good that was with a glass of the Barbadillo Obispo Gascón Palo Cortado.

I departed from my window seat, not too eager to get my feet on the ground. Being aloft on the dining grounds above does tamper with your self-effacing nature. It does help that the staff are brilliant in edifying me on the art of dining alone. Polished perfection bolstered by the warmth shrouding its comfort food offerings, all disguised as designer plates. HIDE’s attempts at gunning for 2-Michelin stars in the next guide are indisputable, and most certainly efficacious at this stage.

Life
The Perils of Being an Artist
Automobiles
Lamborghini and Ducati Have Teamed Up to Build the Ultimate Superbike
Style
5 Unique Conversation-Worthy Floor Lamps
Insights
Alipay rolls out in Cambodia, Myanmar, Laos and the Philippines
Style
Vertical Stripes: How To Break Sartorial Monotony