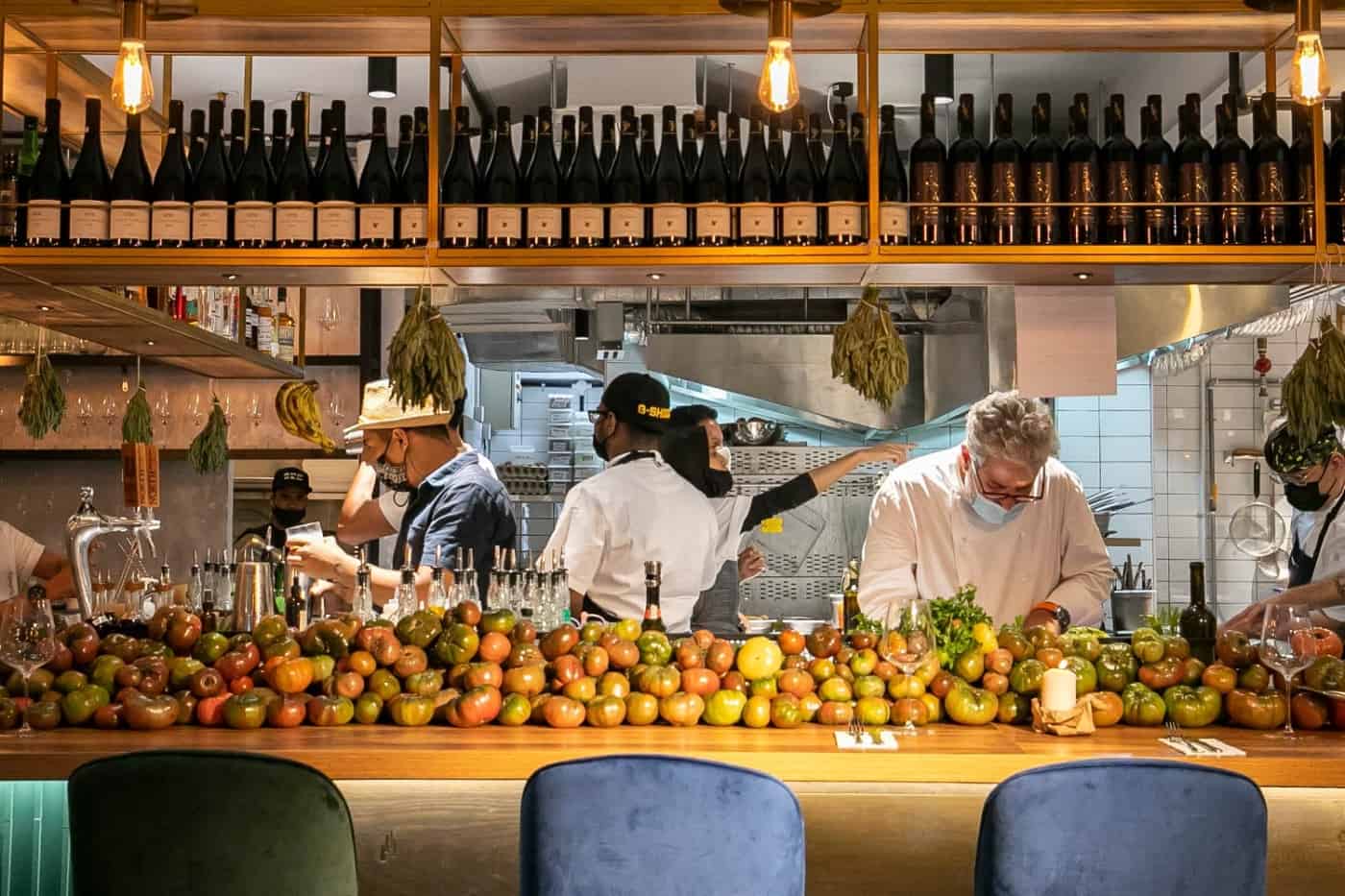 Israeli food of high quality is hard to find in Singapore, but this has changed with Miznon (by celebrity chef Eyal Shani, a MasterChef Israel judge and restaurateur)’s entry into the restaurant scene late last year. Tal Eisenberg and Nadav Cohen stuck to the script by going casual first—serving pliable pita sandwiches stuffed with moreish fillings like herb-flecked kebabs smothered in sour cream. This past month, the duo doubled down by opening their second outlet, North Miznon, a vibey restaurant built around ambitiously composed ingredient-forward dishes profligate with herbs and spices. Although North Miznon is situated in an unfussy, laid-back neighbourhood (Amoy Street), the menu punches above its weight and proves to be a knockout.

Pace yourself with the complimentary freshly made bread that closely resembles the chewiness and airiness of a good Neapolitan pizza. The dough is rich, mildly sweet, and baked to achieve a shatteringly crisp texture before a dusting of salt and olive oil. Chef Shani’s take on naked tomatoes is startlingly good—umami-rich heirloom tomatoes sliced into neat chunks soaked in globs of olive oil—tastes more complex than it is.

Vegetables are not an afterthought here, especially the Indian cabbage, which is roasted in its own juice. The cabbage is a textual masterpiece: the huge head sports a crispy, caramelised exterior and a near custard centre where flavour is most concentrated. What you don’t expect is how hearty it is, almost like a huge chunk of steak. Similarly, yellow potato smothered with sour cream and tomatoes has been amped up and executed with sapidity.

For larger plates, North Miznon’s giant squid is charred on the outside and superbly tender on the inside. There is a great crunch to it, with just the right mouthfeel. Hummus, the quintessential Middle Eastern dip, typically made by blending chickpeas with tahini, garlic, and citrus is elevated lavishly with chopped prawn bits and savoury beurre noisette. The restaurant’s rendition is smooth, enveloping and beyond reproach—thanks to the use of brown butter, which deviates from tradition. By some wonderful alchemy, every bite yields notes of nutty and fragrant flavours. Another favourite by many is the sirloin roast beef carpaccio that is thinly sliced and presented on a slab of stone. Full marks for presentation, but the meat is velvety enough to matter more.

End the meal with sticky banana banoffee—a delightfully gooey mix of toffee and banana or the naked chocolate cake, an extra-moist slice of goodness that is denser than average.

What is exciting about North Miznon is the way chef Shani transforms humble ingredients like fennel, tomatoes, cabbage into disarmingly delicious stars. The bar is set high and with glorious and comforting offerings that celebrate the diversity of Israeli cuisine, you will be hard-pressed to get a table if you don’t book weeks in advance.

Style
3 Recently Launched Nike Sneakers That You Need To Own
Dining
The Masses Is Conquering Taste Buds With French-Asian Flair
Equities
China Equities: Yesterday’s Story or More Compelling Than Ever?
Dining
One Night in Bangkok: 2 Meals and GrabBiking Between One Too Many Cocktails
Style
The SaleSale’s Dempsey Pop-Up Offers Luxury Fashion Deals From Famous Brands