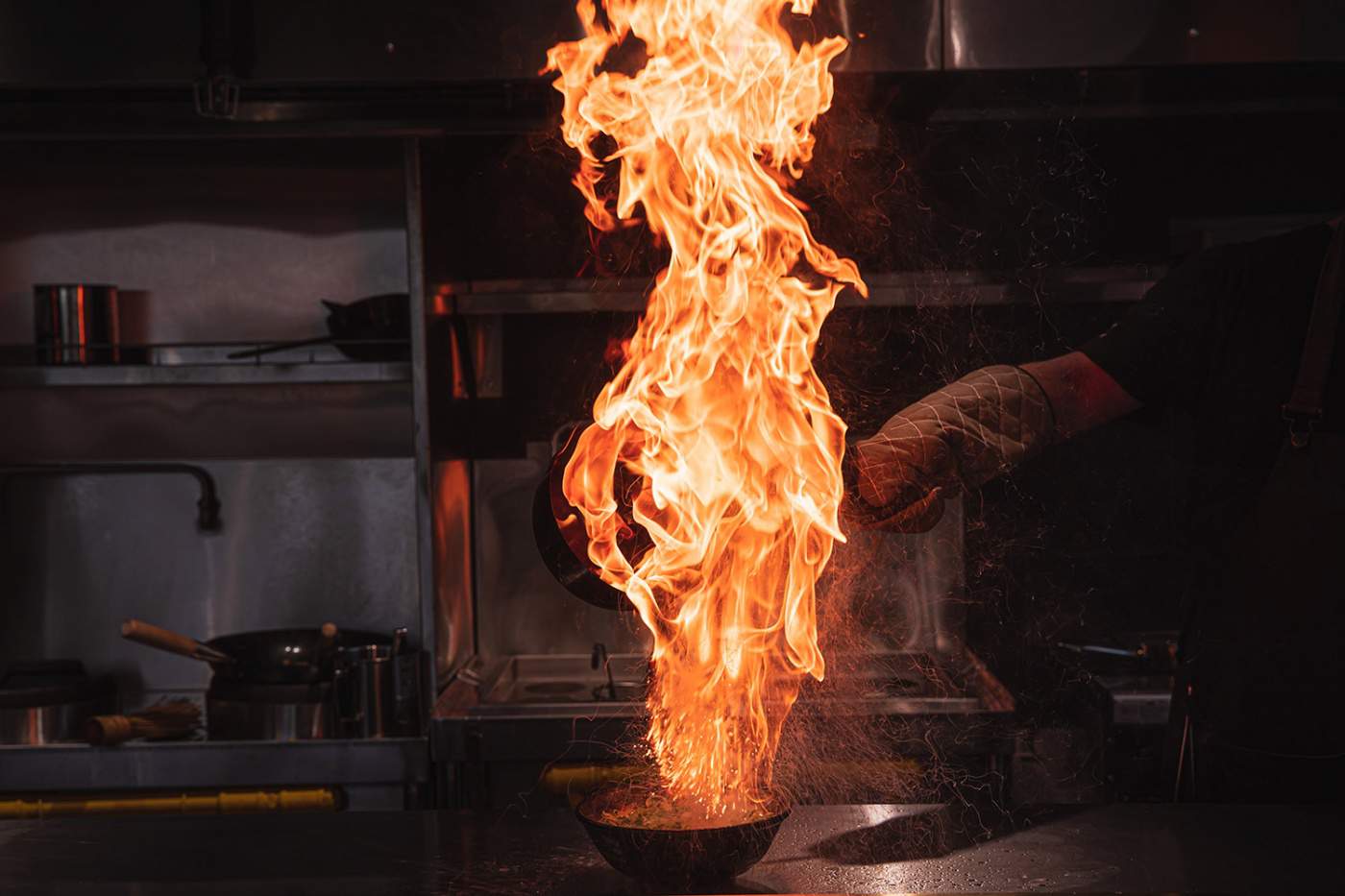 Kyoto’s Menbaka Fire Ramen has opened its first-ever overseas outlet at Cineleisure Orchard. The famous dish gets its name from its over-the-top preparation methods, where chefs ignite negi oil to the point of flames to create a tall fire before pouring it over their signature broth topped with green onions—resulting in a rich, smoky broth.

Opened in Kyoto in 1984 by ramen master Masamichi Miyazawa, Menbaka Fire Ramen is widely known and beloved in Japan for its dramatic (and Instagrammable) preparation methods and for its snaking queues. Menbaka’s signature Fire Ramen isn’t just about showing off: An expert control of the oil and fire is required to achieve the perfect fragrance of the broth.

Master Miyazawa spent his formative years learning the intricacies of ramen making in kitchens across Japan before deciding to open his own ramen-ya in Kyoto. For several years, Master Miyazawa experimented with several methods to catch people’s attention before finally coming up with the idea to create his signature fire ramen; and he instantly found success.

But as the decades went by, the famous brand found it hard to compete with new entrants and the sweeping wave of social media, and Menbaka Fire Ramen teetered on the verge of closing. It was then that Master Miyazawa’s son, Shin Miyazawa, entered the business. Shin taught himself how to speak English and gradually won the adoration of foreign tourists as well as the renewed interest of ramen fans from all around the world. Menbaka Fire Ramen soon returned to its peak: Today, it begins a new chapter with the opening of its first-ever foreign outlet with the Singapore branch of Menbaka Fire Ramen.

One might ask: how safe is Menbaka Fire Ramen’s over-the-top preparation method? Guests will be glad to know that Master Miyazawa and his team have over 35 years of experience and are well-versed in their craft. Also, diners will be asked to place their hands behind their back during the fire show, ensuring that they aren’t in harm’s way at all. The Singapore outpost even features a state-of-the-art exhaust that ensures flames are promptly whisked away once the preparation is complete.

Another dish exclusive to the Singapore outpost of Menbaka ramen is the Crispy Charcoal Karaage Salad, which brings with its juicy chicken chunks with a delightfully textured and crisp exterior, all laid on a fresh bed on greens and drenched with a choice of tangy yuzu and creamy sesame dressing.

Finally, be sure to try their signature Kyoto Menbaka Fried Rice, which uses Master Miyazawa’s special recipe, the crisp and tender karaage that pairs perfectly with Menbaka’s warm, tasty ramen broth and their gyozas.

In celebration of the opening of its first overseas outlet in Singapore, Menbaka will be offering a limited time 1-for-1 promotion for all fire ramen. Available from 27 to 29 November 2020 only.