Singapore is well-known for being a food city that promotes diversity amidst a very challenging restaurant industry. Its lack of land has resulted in sprawling dining clusters at prime areas such as Telok Ayer which heralds everything from late-night Korean BBQ joints to riotous beer bars, voguish dumpling stops and trendy smokehouses. However, the key to loving the city is first understanding one’s primal needs for food, and satisfying that in the most cost-effective manner. It might mean sneaking out of the office a little earlier and celebrating that mid-week slouch by having lunch at Le Bon Funk, which has recently rolled out a 2 or 3-course menu at a modest $45/$53 price tag. Does the precinct need another lunch steal? I think so, despite the proliferation of midday bargains that line the streets. Hidden costs do add up. Sparkling water, sourdough bread and butter, and that irresistible cheese course. Notwithstanding the commute and having to fight traffic to earn a counter seat overlooking the kitchen action, I must proclaim that the new lunch set is worthwhile.

Le Bon Funk’s decor is tasteful—accents of brass and Terrazzo against muted tones of beige and teal walls. There are little batty touches of rattan to draw the showy crowd lining up for a #workhardanywhere Instagram shot by the window seats straddling the entranceway. Right underneath the grandeur of the old-world shophouse with a glass of skin-contact Roussillon in hand would be most ideal. I’m most thankful for the counter seat height to bar counter height ratio, as it forces you to sit straight for the fear of a side profile muffin top. As a refreshing dry pét-nat is tipped over, I notice one of the kitchen staff furiously grating a hard block over what I make out to be crunchy toast. The unidentified snow drums down in steady beats till all the browned edges disappear from sight, only to have it brought to my attention by Chef Keirin Buck a little while later. “Here’s your first starter,” he introduces, it’s a brioche topped with cedar jelly made decadent with frozen cognac cured foie gras grated overhead. It melts the instant you press your lips to it, leaving a ridiculously rich moustache on your upper lip which you will proceed to lick off appreciatively. Inspired by Singapore’s local kaya toast, Keirin’s international palate fostered by his mixed heritage and culinary worldliness finds home in this dish and several others you’ll uncover along the way. There’s Japanese Mackerel in buttermilk and basil oil perched over turnip puree. The portion sizes are appreciable with crisp edges on one end and red centres where the fillet is thicker. Next to it is the housemade Charcuterie including Lomo and venison studded with blueberries which you would devour eagerly between bites of buttered sourdough toast. Considering how laid-back the setting is, dishes are surprisingly ambitious.

I experienced cognitive dissonance with the Beef Tongue Sandwich. One, because reality outweighed expectations, and two, I value my health but defiled it with offal, sauce gribiche and buttered brioche in one seating. Truth be told, I rarely think anyone would walk out of Le Bon Funk without giving in to temptation. Exquisitely tender slivers of beef tongue that have been artfully cured for three days might have been too rich on its own, but here, it’s thoughtfully piled underneath a heaping dollop of gribiche—think a mayonnaise-style sauce with mashed egg yolks and chopped cornichon. It’s a beaut.

Gnocchi with hazelnut and broccolini, the humblest of dishes, stole my heart. Each gnocchi with grooves allowing for the silky puddle of sauce below to cling to it longingly. It’s the kind of dish that takes real confidence to both cook and serve, mixed with equally firm yet cushy potato pillows adorned with toasted hazelnuts. Elsewhere, the Berkshire Ham steak hogs my attention. As did the previous dishes, it’s nothing kooky, but Chef Keirin’s treatment of it is as good as it gets. Smoked for hours on end and then finished in the pan, the result is crisp crust hiding a ring of fat that’s been imbued with wood smoke. You can go ahead and kid yourself that you’ll choose the inner pieces as a healthier option, but really, it’s the stratified chunks you’re eyeing. Lessen the guilt with forkfuls of sweet pineapple tomatoes or the seasonal vegetable side of marinated zucchini enlivened with textural hints of walnuts.

I continue the debauchery with dessert. The Birch Syrup Tart punches above its weight. Canadian birch trees are tapped in early spring to attain this coveted sap, then reduced to produce a beautifully intense syrup that the kitchen sweetens the custard base with. Move aside Crack Pie, there’s a new representative in town. There’s also a quizzical appearance of celery as it surfaces as a custard paired with crispy buckwheat. Act of genius or accidental product of recipe experimentation? Either way, I could eat this every day. 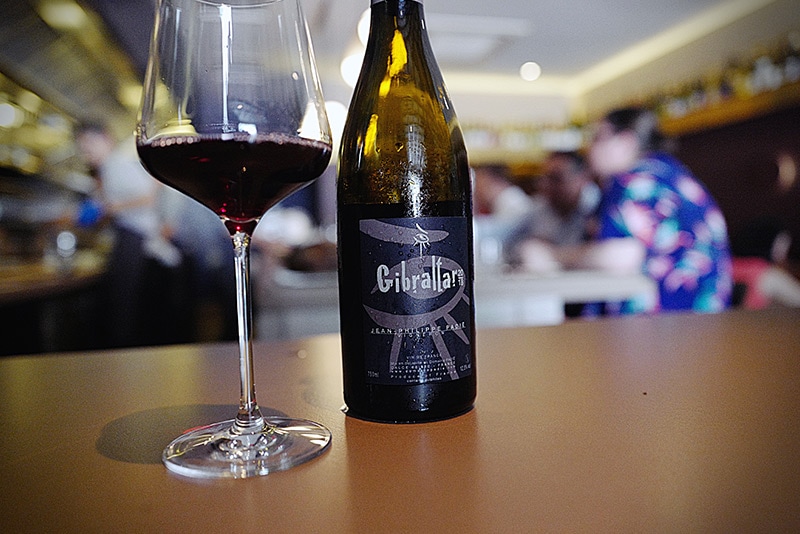 Returning back to the wines, Head Sommelier and Restaurant Manager Josée Yeomans sets out to pacify natural wine cynics by removing the ‘funky’ characterisation predisposition. It works, and I’m pleased by the Fais Pas Sans Blanc 2018 by Vin Des Potes from Hérault, France dispensing some hawthorn berry notes with an edgy minerality to round it off. Another French find is Gibraltar by Jean-Philippe Padie. Made from a one-hectare lot of Grenache, this tipple prompts memories of Finnish blueberry and burning birch wood. The wine by the glass selection changes every day and is a great way to get acquainted with the world of natural wines. Sourced with care so as to align the restaurant’s vision with the winemaker’s ethos and production quality, you’ll most likely be greeted with a background story from the friendly staff with every glass or bottle.

Le Bon Funk’s real appeal is its down-to-earth homely charm, albeit with prices that are slightly agonising for the middle class. For the fact that bread, water and an extra vegetable dish are thrown into the set ($53 for 3-courses), this has to be one of the best-value lunch menus in town.

Property
Habitap Launches an App for Affordable Modern Smart Living
Travel
World’s Best Beaches in 2021, According to Tripadvisor
Bonds
We All Love To Hate The Bond Market
Culture
Inside Johnny Two Thumb Tattoo Studio with Jaws
Culture
How to Live a Day like a Crazy Rich Asian