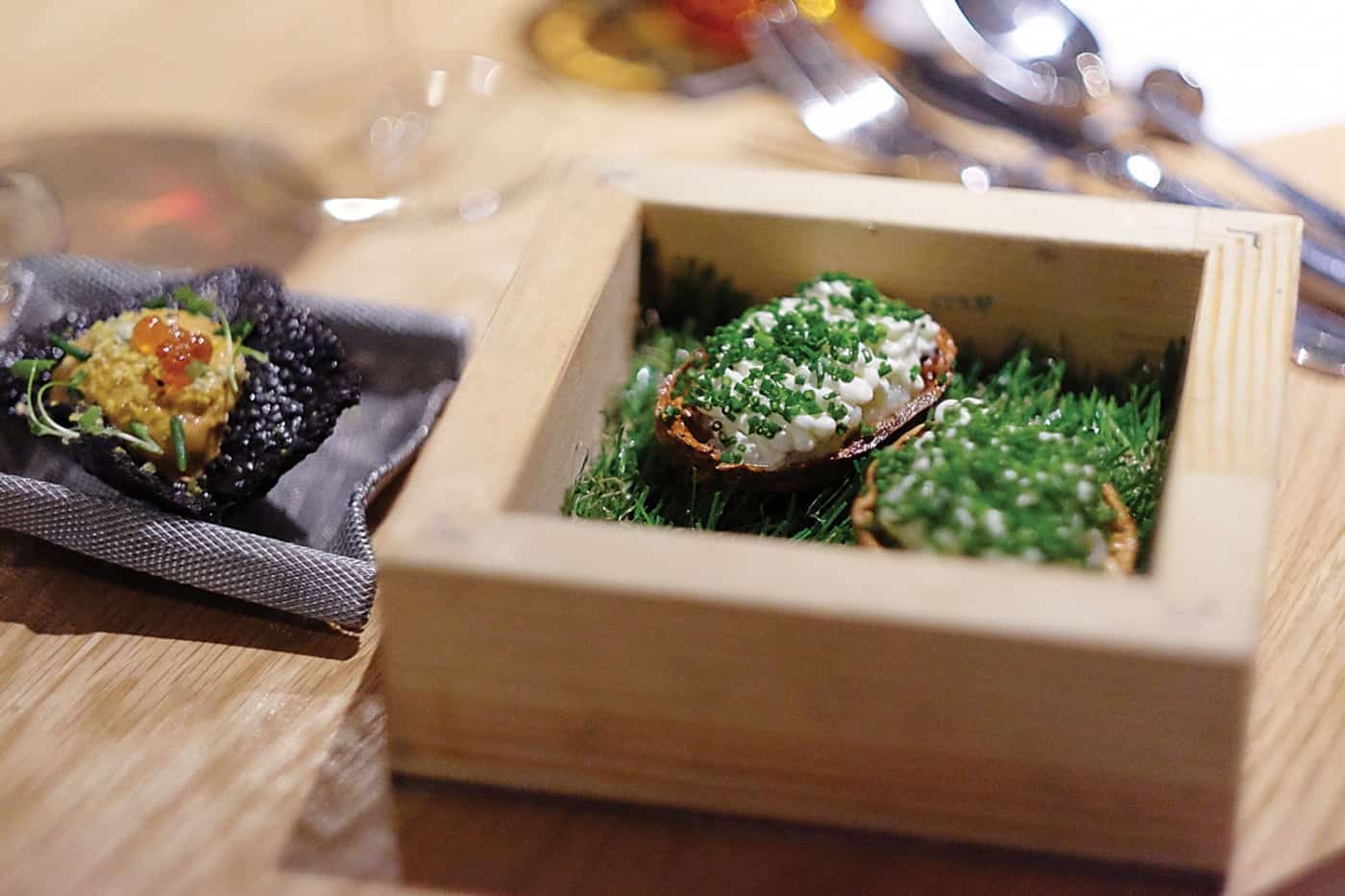 Chocolate stained lips, wine drunk, our knee caps touching ever so slightly. With the tragic 197 miles between us, date nights are hard to come by, and when opportunity knocks on the door, we seize it and go out on the town.

Tonight I consummate my love for alcohol, charging through a flight of Couvent des Jacobins St. Emilion  vintages from the stalwart 2009 down to a luscious 1989 tipple. Food and wine pairing, when done right, is a mutually beneficially relationship. So it makes me smile when the two come together in ways that are complementary and evocative. Suffice to say, by the end of the night, I had a silly grin plastered on my face—such is my simple story of the Sarment wine dinner at Lerouy.

Christophe Lerouy, was the former Executive Chef at Alma by Juan Amador and was the star power responsible for clinching Alma its first Michelin star in the inaugural edition of the Little Red Book in 2016. He left soon to start DSTLLRY by Christophe Lerouy which was short-lived. Soon after the ill-fated business closed its shutters, new partners Chef Willin Low and Gwen Lim gathered to set up Lerouy in a shophouse along Stanley street.

Lerouy is quite a visual spectacle, stepping into its cool dwellings, your eyes are drawn immediately to the opulent wooden counter that snakes its way in an unpredictable fashion into the depths of the shophouse unit. Making several sharp turns at the heart of the restaurant to mark out the pass, is where you’ll get to witness Chef Christophe and his small brigade assemble dishes with the precision of a team of surgeons. The strictly degustation menu only establishment pays homage to French fare, albeit with Asian-influenced inflections.

We kicked off the night with a robust pour of Couvent Des Jacobins, Saint Emilion Grand Cru 2009, yielding a slight cocoa undertone to abet the incipient flavour development throughout the meal. The chateau of Couvent des Jacobins is centred in picturesque Saint Emilion village. As Right Bank Bordeaux as it gets, the 11-hectare vineyard is a true, family-owned vineyard. Needless to say, the choice to work with maestro Christophe Lerouy made for a canny yet artisanal partnership.

The kitchen is a hive of activity, the brigade attending to their delegated tasks with due diligence. We observe as blobs of beetroot butter dyed the colour of ethereal sunsets are piped out on dishes next to mounds of charcoal butter. On the other side, thick slabs of foie gras are torched till blistering, the smell of caramelised fats wafting through the space, commanding your attention even before you witness the action. Looking eagerly forward to the much-revered sourdough, we witnessed in horror as an impatient chef resorted to hacking at the warm mounds with a serrated knife after a rather poor attempt at sawing gingerly through that hardy crust. Pardon my mawkishness, but the sound of enforced compression was excruciating. My breaths heaved and swelled as I took a generous swig of my wine. A quick glance over at my partner revealed a perturbed expression that spoke of an inward ferocity so grave that no words were going to get through that internal jukebox with extreme tracks from a teenager’s angst playlist on replay.

“Seriously?,” his cries appeased only by the appearance of a handful of playful starters brought to the table. A squid ink rice cracker is a blessed vehicle for a bouillabaisse topped mussel with cured yolk and ikura perched precariously overhead. It implodes with immense flourish, unleashing a myriad of taste indexes for the brain to digest. There was also a play on potato skins, happily filled with creme fright mixed into potato salad, smoky cured Japanese mackerel and chives. One would reimagine this as a filthy ritzy late night snack after one too many drams of whisky. But bearing in mind the pace of the wine-pairing dinner, we had no chance to entertain those thoughts. Bread baskets with the (previously massacred) sourdough were whisked briskly to the table with a whole legend of whipped butters from original to charcoal and the slightly piquant beetroot. Despite the earlier mishaps we witnessed, the slices showed significantly less bruising than we would have imagined. The showmanship of gluten development in the crackling crust giving way to the moist tangy innards.

You’ll be able to find plenty of restaurants that serve a beef tartare on the menu, but none that produces Lerouy’s standards with conviction. The fresh beef and savoury miso ice cream combination hits you right in your animal pleasure centre with the force of a bullet train and gives you experientially, a sexual gratification type of high. Yuzukosho makes an appearance periodically, titillating the palate with a citrus heat.

The theme here is bold flavours interspersed with spice to highlight the earthy disposition of the Bordeaux. The next dish of Pork feet does just that. Pork feet is stewed in a vegetable stock till agonisingly tender, this is then browned in the pan and rolled to be sliced similar to a carpaccio. The gelatinous slices, sat in a soya and garlic dressing are riveting and they dissolve with the resolve of snowflakes on your tongue. This is a perfect match to the 2010 vintage, a medium bodied Grand Cru, meekly spiced with a firm espresso finish.

The meal progresses in waves of succession, each course more audacious than the first. One of the dishes that I sang high praise for was the foie gras topped with a translucent sheath of lard. This is drizzled with a lovely red wine reduction and finished with a feather dusting of seaweed powder. This lovely juxtaposition is paired with the Grand Cru 1996, which opens up to a sour red fruit note featuring hints of fresh mint and forest air, quite reminiscent of springtime.

Have you ever been to a restaurant, in this particular instance, an open kitchen and asked your server (aka the same kitchen guy who had a part to play in the precision plating) what the dish was and gotten a blank stare in return? Then you would understand how frustrated I felt. As far as restaurant efficiency goes, Lerouy doesn’t fare too well in the department. The servers relying on Chef Christophe to pull the weight of the ‘entertainment’ by which I was greeted with intermittent stargazed looks as he pushed through the strains of cooking to convey the dish methodology in English. “Parlez Vous Francais?”, followed by a genuine slump in his shoulders as he struggled to explain the next dish—incidentally something that I can’t stop raving about.

Perfectly executed pigeon is topped with a nappage of almond, yogurt and beurre noisette; cherry and liquorice providing a nice tart corrective to the underlying sweetness. It’s a zany dish, a little misunderstood due to the grittiness of the sauce. However, the proof is in the smashing kaleidoscope of flavours that are so balanced that no one ingredients outshines the other. It invites you to sip on the 1989 Saint Emilion Grand Cru poured from a magnum gingerly, as if to prolong its pleasures.

We sank our teeth into soft folds of chocolate namelaka, which delivered a whack of earthy flavours from the black sesame ice cream. Finally, I concluded my meal with berry pate de fruit and tiny yuzu madeleines before clutching my stomach with a mere sense of gratification, ready for bed, and still harbouring dreams of that perfect pigeon dish.

Style
The Best Self-Tanners to Get a Summer Glow
Style
5 Most Expensive Sneakers in the Resale Market Right Now
Automobiles
Aston Martin Has Built Its First DBX707 Customer Car
Style
Here’s How To Embrace Animal Prints This Season
Travel
From Mozambique to the Maldives: Private Island Buyout Retreats