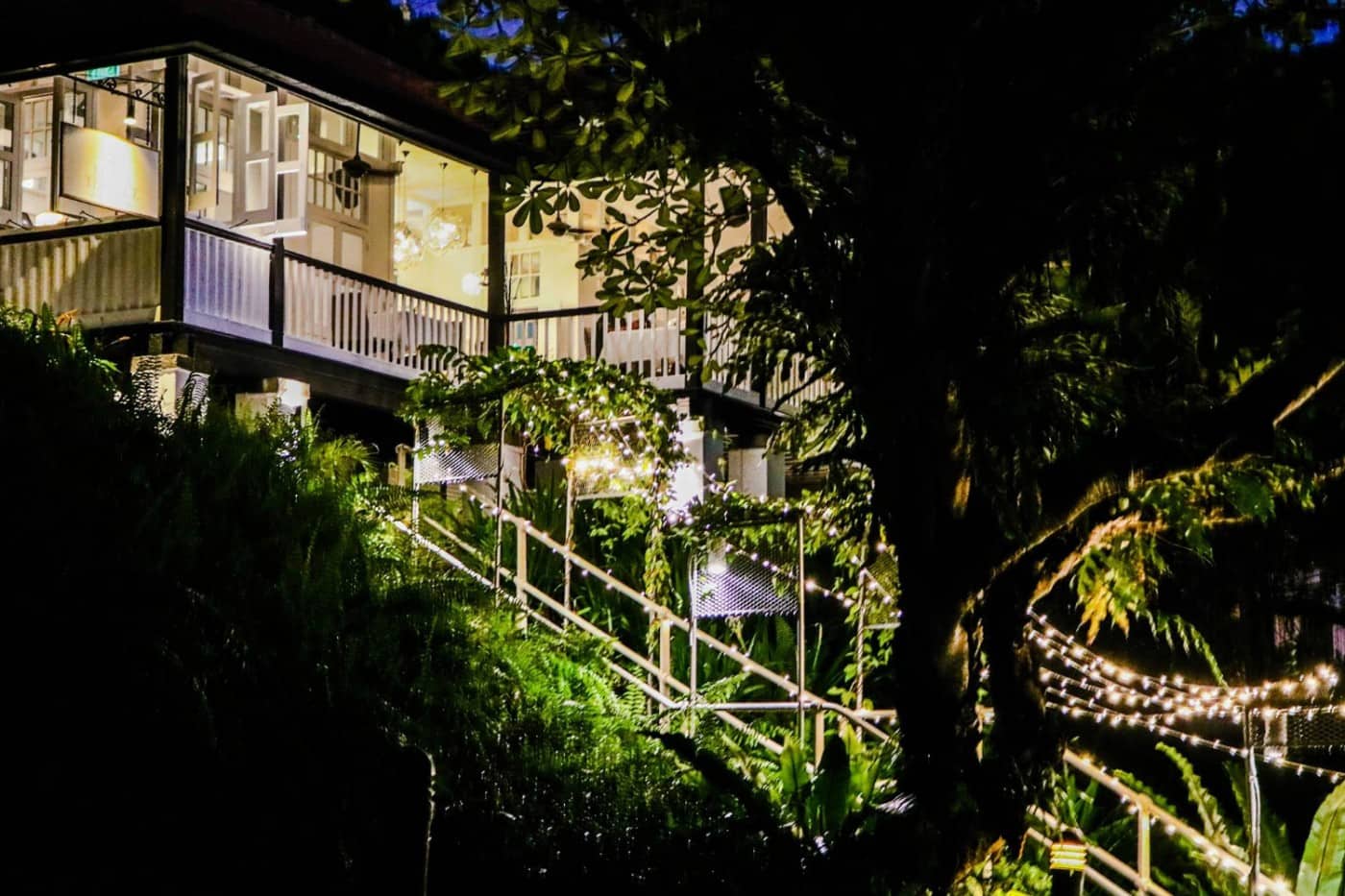 Perched on a hill and surrounded by lush greenery in Fort Canning Park, Lewin Terrace has a colourful history. It is a charming black and white bungalow that used to be the residence of the Chief of the Central Fire Station on Hill Street. Accordingly, it takes after the name of Major-General E.O. Lewin, who was the General Officer Commander in Singapore from 1933 to 1935.

Flutes at the Fort which previously occupied it, had moved out. Today, Lewin Terrace is the place for Japanese-French fusion fine-dining cuisine. It has been there since 2014. The ambience of the restaurant is best suited for a romantic dinner date, anniversary celebrations or business entertainment. Away from the traffic, the place is quiet and the air smells clean and fresh. Tables are set quite far apart so that it is almost impossible to eavesdrop on the neighbouring diners’ conversations.

This black and white bungalow has a couple of sections with the main dining hall dominating. Diners can also sit along the balconies where they will have a good view of the park. The total seating capacity is 82 diners—the indoor section can accommodate 66 and outdoor alfresco12. There is also a bar at Lewin Terrace which can accommodate up to 4 guests.

Helming this heritage restaurant is Keisuke Matsumoto who is the Executive Chef and partnering him is the Chef de Cuisine, Hiroyuki Shinkai. Chef Matsumoto hailed from Sendai of Miyagi Prefecture which is in northern Japan. He has worked in Tokyo’s established French restaurants and spent 4 years in France to master the French culinary techniques in Michelin-starrred restaurants. While in France, he also learnt to speak French fluently.

Having heard so much about Lewin Terrace, I decided to drop in for dinner last week. Personally, I like both Japanese and French cuisines and this combination at Lewin Terrace seems the perfect place to dine.

Lewin Terrace’s set menu changes with the 4 seasons. Although there is an a la carte menu, the selection is quite limited. Most diners will opt for the set menu which gives better value. The restaurant was serving the winter menu when I was there. There are 2 set menus to choose from—Sho-Mi Winter menu costs $118 per person and Wakon-Yousai at $188 per person, wine pairing at $120 with 6 glasses of wine Add $8 for Evian (still) or Badoit (sparkling) water which is unlimited.

Of the two set menus, I picked the Sho-Mi Winter Menu which consists of 6 courses. The set also comes with Japanese tea, coffee or tea. Before the start of the meal, I was served a sack of warm home-made bread. Inside the sack, were large heated pebbles to keep the bread warm which was a brilliant idea. Even after an hour, the bread was still warm.

Compliments from the chef was the amuse bouche which was made up of chopped beetroot, some crunchy fruits and vegetables. I could not make out all the ingredients except the beetroot. The first course was salmon and roe with cauliflower, coriander and sesame oil. It sounded uninteresting but it was just the opposite. Covering the ingredients was a piece of hard crusted flour with very fine powdery salt sprinkled on top. The pleasant surprise came when I broke open this crust. The salmon and roe had a tinge of sweetness and blended very well as a whole.

The “Amaebi” (sweet shrimp) tartar with Kohsino ruby tomato and golden dashi jerry was served like a soup dish. The amaebi was fresh and crunchy when I sank my teeth in it. This soup dish was light and full of flavour.

Hokkaido is famous for its fresh seafood. The next dish consisted of the Crustacean Royal with Hokkaido Kegani or crabmeat with namafu (highly refined wheat) and Japanese fishcake. The crabmeat taste was subtle and also tasted fresh.

The fish dish was the cod with mango which came with savoy cabbage and lime leaf. The presentation was like a piece of art. The savoy cabbage covered the piece of cod. It was beautifully crafted and most important of all, it tasted very good. The succulence of the cod was delightful.

The meat dish was the Australian lamb loin which came with Lewin spice and bitter orange and marinated with Kanzuri.  Kanzuri is a paste of red chilli, peppers, rice malt, yuzu and salt. It is generally used for grilling dishes. The lamb was well executed with the meat soft and tender. When it was presented, the dish looked more like a dessert than the lamb loin.

The dessert was named “I love you” which resembled a bigger version of an éclair and inside the pastry was a mixture of raspberry, lychee, setouchi organic lemon with a scoop of ice cream on the side. Icould not figure why it was so named but it was really lovely that I polished the plate clean as the pastry was not too sweet and it had a citrusy taste.

The portion for each course was just right and I did not feel stuffed at the end of the dinner. The staff were attentive and service was excellent. The service staff also took pains to explain the ingredients which went into each dish. Lewin Terrace certainly deserves at least one Michelin star for the whole dining experience and the quality of the food it served.

Access to Lewin Terrace is through the red gates to the left of the Singapore Philatelic Museum at 23-B Coleman Street, Singapore 179807 and the main entrance of the restaurant is located up the first flight of stairs.

Travel
Raffles Hotel’s Latest Staycation Immerses You in the Local Arts Scene
Property
Rochester Commons Aims to Be Singapore’s First Campus-Style Integrated Development
Insights
Move Over Banks, We Have A New Singularity In Our Lives
Bonds
Ignorance Is Bliss In Singapore Bond Markets
Dining
Are Hotel Bars Making A Comeback?