Luca Fantin: An Italian Oasis in the Middle of Energetic Ginza 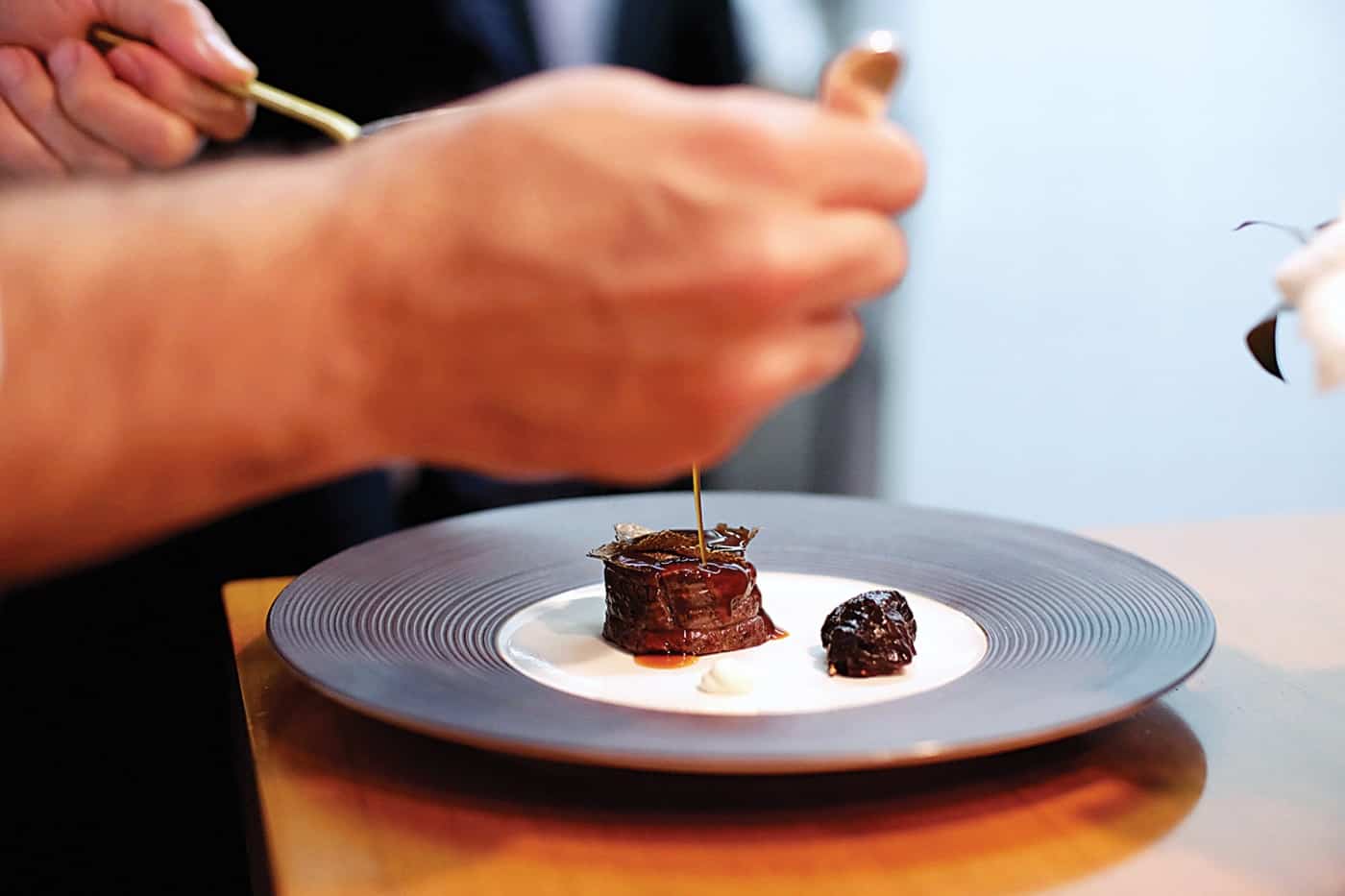 There’s a certain sound most people would make when you reveal that you’re invested in an Italian fine dining experience—especially one that is in Tokyo. It sounds most certainly like a ‘tsk’ or a click of the tongue to express genuine disapproval. If I had been flagrantly swayed by public vote, I would have perhaps missed out on what would have been the greatest Italian meal I’ve had the privilege of partaking in, this year. It’s a bold statement, but one that I’ll happily stand behind, especially after the chefs rain the freshest shipment of Alba white truffle down on your plates with liberated spirits.

The kitchen led by Chef Luca Fantin and pastry guru, Fabrizio Fiorani is a peaceful setup and one that runs like clockwork as witnessed from our chef’s table, tucked away in a kitschy decorated corner just parallel to the pass. Here, you watch with a keen eye as vision transpires into works of art on white plates that are marched with military precision to hungry diners. With the occasional tasting spoonful of creamy risotto and the final wipe down, Luca’s looming presence in the kitchen is not one that is demanded as much as it is valued by brothers in arms. Luca’s 9 years of blood, sweat, tears and frustrations poured in the Bvlgari hotel restaurant has evidently paid off. And just like the triumphant swelling of the orchestra when it peaks at the climax of the final movement, I felt an undefined sense of awe to be involved in this culinary symphony.

To understand the full story, let’s rewind back to 2 months ago—where a fortuitous but no less ambrosial collaboration meal between Chef Kirk Westaway of Jaan and Luca Fantin, ranked 28th on Asia’s 50 Best Restaurants list, caught my attention. I remember our first interaction as if it were yesterday, an after-lunch banter with the collaborating chefs revealed my slight apprehension towards visiting Japan. My response was met with mostly disdain and stupefaction.

The month of November 2018 was marked by a imminent clairvoyance—I had fallen in love with Tokyo and its abundant treasures. Care has been showered lavishly during the trip, and I wouldn’t play the ungrateful card, only to claim that my affections had not been swayed by the Bvlgari hospitality. It’s always a lovely thing, the added advantages of being chauffeured in a Maserati, clouding your judgement. But the organisation does it so succinctly that their programs should be trademarked by gourmet tour companies. For the better part of it, spending quality time with the chefs in and out of the kitchen, sharing meals at their favourite spots in Tokyo had paved a clearer understanding of their personalities and philosophies.

And you taste it immediately in the food.

The meal starts off deceptively simple, the classic Antipasti course—olives, grissini sticks and a cherry tomato. Except that it’s none of those. Straightaway you’re tossed into the peculiar depths of Luca’s cooking, a kind of Willy Wonka world built on pure imagination. ‘Olives’ are bacalao fish and ricotta cheese refashioned, the tomato water macaron is filled with burrata cheese, and the dip is a savoury prosciutto espuma. You are also treated to a ‘welcome drink’ of Negroni spheres that implode, coating the palate with bitter campari. It’s mind-boggling to witness the lengths gone just to put the  ‘Luca Fantin’ stamp on his amuse-bouche, however, Chef emblazons this with fierce intent.

Luca brings the market’s latest season collection in bejewelled forms to your attention. There’s turbot carpaccio doused in agrodolce sauce, kampachi paired with a red splash of beets, tomatoes and olives, and yellow florets of cauliflower peeking out from under the sea urchin. You graduate to the next row of snacks: creamed scallop, fried squid ink consommé, saba with liver sauce and mini bruschetta topped with translucent sheets of homemade bottarga. It’s no more than 8 mouthfuls, but you will recall all of them because of its delightful play on textures, to which I will add—stick to the order that you’re instructed to follow. Nothing is left to chance in this symphony.

The rest of the food is a little more matured, but it still shows cojones. King crab hailing from Kamchatka is stuffed with crumbs and given a cheeky dusting of nasturtium, burnt lemon powder driving it home on the acidity avenue. What’s an Italian dinner without some carbs? A gentle slice through the potato filled squid ink ravioli topped with Japanese caviar from the Miyazaki prefecture, and I’m in love. The whitish cream composed of burnt skinned potatoes made first into a consommé and finally a cream dancing across the palate with resolve to make you swoon. It’s hearty and dizzyingly intense with a measured acidity and a light waft of grated lemon peel to highlight the subtle fishiness of the caviar. Straight from the dictionary of sins comes the Chestnut risotto with parmesan cream, and just when you’re half expecting it to tread down the traditional route, the dish throws a curveball of steamed almond tofu as a butter replacement. It lowers the guilt factor substantially without scrimping on being profoundly delicious.

The gluttony goes on and on. From the meatier side, there is an inconspicuous piece, disguised to pull the cover over your eyes and wrap your palate in a comfy wooden blanket of thickened sauces and unctuous meats. “Can you guess what it is?” Chef Luca Fantin posing a challenge that raises the spirit of competition around a full table of diners. Lamb? Beef Brisket? Guessing seems increasingly futile as the slab slowly vanished to nothingness. Turns out, it was the neck of tuna, confit in olive oils steeped in burnt onions till it slowly collapses on itself. Who would have guessed? Nonetheless, it was compelling and successful in setting the stage for the red-blooded treat—6-week aged venison tenderloin which picks up flavour from white pepper paste and textures of figs.

The nearest criticism is the fact that Luca Fantin has a way of filling you up without impending warnings about the brilliant desserts. I’m telling you now, leave room for desserts. The art of a true chef lies in his ability to juggle talent, respect for traditions and his ego. With that said, one spoon into the white truffle latte dessert and it is evident that the mischievous pastry chef Fabrizio Fiorani has got it all figured out. Soft confidence translated through various textures of Hokkaido milk is pleasantly interrupted by blithe bits of pine nuts that introduce both richness and dashes of brazen nuttiness. Then there are the subtle whispers of earth and funk from shavings of white gold—Alba white truffle. For a brief moment, we all royally swoon, immune to the ravages of time.

Unholy unions are Fabrizio’s game and his rift on the classic tarte aux poire soars to new heights with Kyushu orange and ricotta layered snugly with chocolate, meringue or crushed biscotti and puree of pear. Finally, a study of raspberry, proudly gussied up using a magnetic stencil with a befitting raspberry to symbolise its real contents. There is a layer of rich chocolate namelaka combined with crushed biscotti, alginate and raspberry paste which provide a complicated playground of crunch. There are grand flavours here, but the allure of the Hokkaido Milk White Truffle Latte is relentless. Get that as long as the season lasts.

After that, you’re clenching at your belly, the brilliance of the menu blinding one’s consumption limits. However, Luca Fantin doesn’t let you off the hook that easily. Fashionable acrylic Roman pillars carrying petit fours of various shades and styles are placed on your table, with as much gusto and weight as you have ‘magically’ acquired throughout the feasting. There are Tiramisu coffee chop pastry, lemon meringue tarts and passion fruit pate de fruit. Hell, there will be struggles to get to this point, but you will and must pull through for the Chiba Peanut creameux in ‘peanut’ shell. Unlike most restaurants that wimp out on desserts, Chef Fabrizio finishes strong, fairy dusting the affair when you think that the journey can’t get any more spectacular.

Luca Fantin is the epitome of chutzpah. Its imaginative approach to modern Italian cuisine is a good enough reason to visit Tokyo. So, thank you Luca Fantin and Bvlgari hotels for granting me such an extravagant experience (with or without the Maserati). You are the reason why I’m irrefutably smitten by Japan.

Insights
Is There Such a Thing as Work-Life Balance?
Culture
Inside Ling Wu Le Salon with Wu Ling Ling
Insights
Nearly​ ​Half​ ​of​ ​Singaporean​ ​Fresh​ ​Grads​ ​take​ ​up​ ​to​ ​Three​ ​Months​ ​to​ ​Find Their​ ​First​ ​Job​, ​but​ ​30%​ ​Quit​ ​After​ ​Less​ ​Than​ ​One​ ​Year
Insights
Will Funan 2.0 Follow the Same Fate of Dying Shopping Malls?
Travel
Janu, Aman’s New Sister Brand, Focuses on Rekindling the Soul