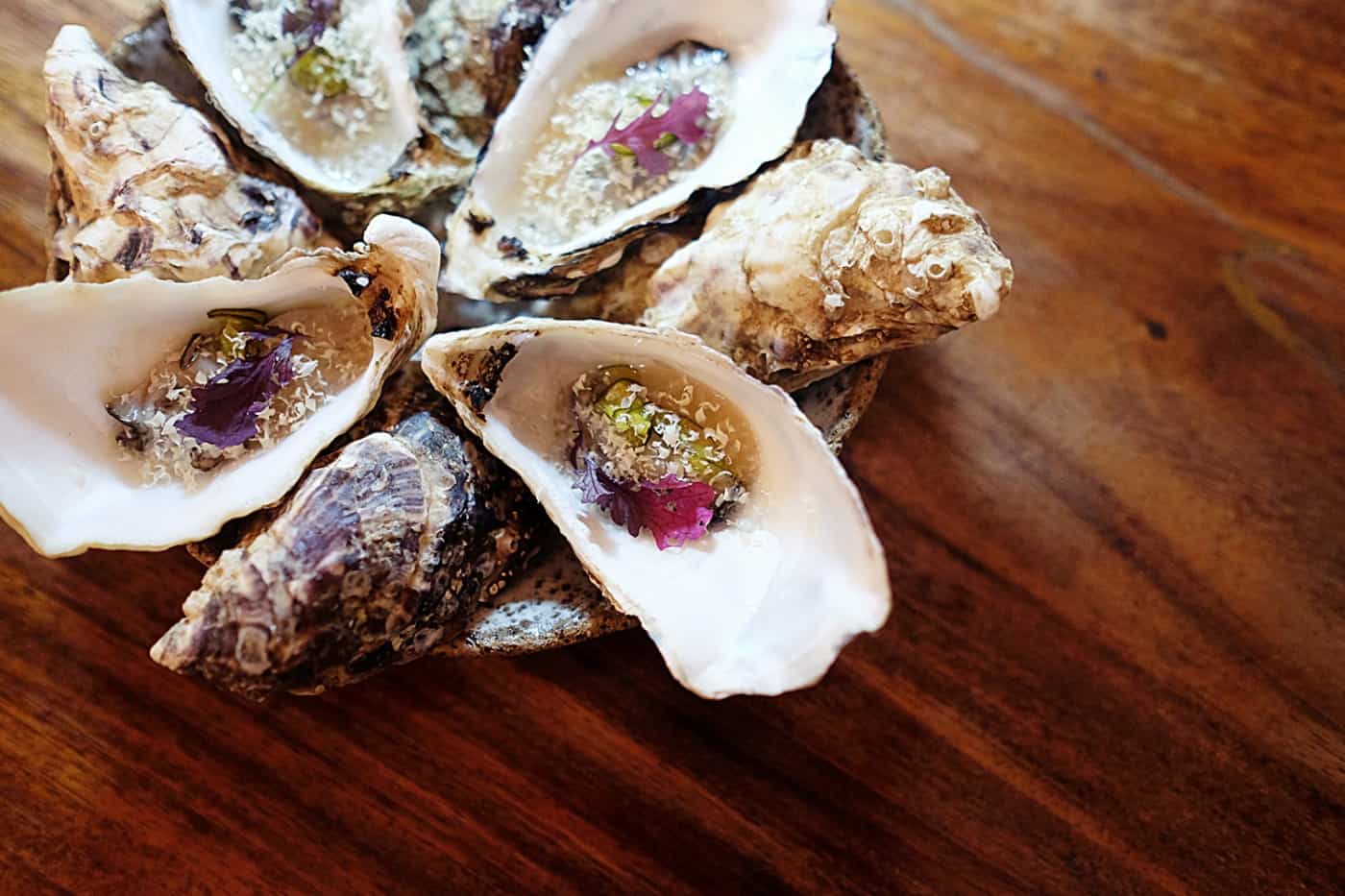 Areas like the lush Dempsey Hill have had its fair share of ups and down over the last decade. It spruced up nicely in its food and beverage conquest, attracting voracious appetites and roaring conversations in its heyday with distinguished overseas brand backing. Think, Jones the Grocer with its cool, softly lit gorgeous lofty interiors and fresh stacks of pancakes. However, the slowing economy took a huge hit and expatriates who were the majority denizens of Dempsey started making lesser trips to the enclave. All of a sudden, things took a drastic turn and these giants slowly moved out of the leaving a void to be filled. Not long after, new lifestyle quarters Como Dempsey happened and the precinct teamed with life once again. Taking the plunge, was Petrina Loh, Chef/Owner of Morsels (previously located in Mayo Street) who moved her small plates restaurant into a more intimate 40-seater, 1000 sqf space just a stone’s throw from Long Beach Seafood.

Having not patronised her previous outlet before, I was pleasantly surprised by the cottage-like intimacy of the dining space adjoining the open kitchen. Wild ferns frame the bar while wicker chairs and wooden table tops up the ‘rustic’ quality one experiences immediately once you slide pass those full-length barnyard type doors. At this point, you’ll wonder if you’ve inadvertently stepped into someone’s home and glance around for quilted corners.

I took a quick browse at the menu and was stoked to notice the absence of parroting of modish ingredients. No kale, no kombu, nothing burnt nor aerated. Anticipation ran high as the soulful concept of Chef Petrina’s obsessive cooking fell into place. It was fusion food, but not the kind that bastardised local cuisine nor shaped childhood memories. Instead, she delves a lot deeper into origins, breaking down cultural culinary boundaries to produce the most addictive liaisons between her own Asian heritage and full on ‘wild-child’ antics of a global restauranteur mindset. A few small hiccups notwithstanding, every witty dish in the Omakase menu keeps Morsels firmly in the dining conversation. Whether it be a frown, ringing senses or wine-glass clenching moments, Morsels is definitely worth a visit.

Briny oysters from Normandy, France sets the tone. They are dressed with galangal ginger shrub, tumeric cucumber pickle and a twig of galangal ginger flower shrub which provide a herbaceous contrasting note to the glorious poise and briny power of these plump babies. You’ll want to take a swig at your Prosecco Di Valdobbiodene with this one.

Morsels has a knack for making unlikely pairings taste like they’ve always belonged. You’ll encounter a pleasant wash of pleasantries as the salty kuhlbarra barramundi brandade, tobiko and creamy egg fillings collide with the Devilled Eggs. This is certainly an instant signature dish and mind you, you’re just at the tip of the iceberg. Let’s move on to sharing plates shall we?

I admit to being a shameless sucker for burrata cheese. Morsels departs from the usual variety in that its prized creamy qualities are masked by meesua ‘mammi’—essentially deep fried mee sua crumbs, and flanked by a heaping amount of kale salad that cried out for more dressing. I wrote off the concept immediately, seeking solace in the Gin-cured Mekajiki Belly for atonement. Here, Swordfish belly is cured with Ford’s gin and flavoured with kampot red pepper, chrysanthemum flowers and rooibos. The superb quality fish gets a textural lift from crunchy shaved kohlrabi and pickled shimeiji mushrooms. I feel better now, grievances laid to rest. Pardon me, but as much as my adventurous palate goes, I’m not immune to the appeal of the purer forms sometimes.

The Homemade Daikon Cake is met with dubious stares across the table, but the end result is charismatic—an honest humble attempt at paying tribute to a bygone Singapore. The semi-traditional dish combines brown crust and the umami quality of mushrooms in various shapes and sizes and pounds it into convivial submission. Capped with crispy enoki strips, the pretty display begged to be jumbled to delicious ruins.

I’d suggest that if you are dining at Morsels, you must try the Steamed Venus Clams here. Delicate clams in a pool of pickled wake and homemade kimchi laced fig (or mo fa ko) broth. The utterances of the last ingredient resonated deeply with me seeing that I used to nibble at the blue-tub of preserved fruits like a ravenous mouse when I was younger in a bid to soothe the ailments of childhood asthma. Needless the say, this “Classic” favourite was a dream, the rich saltiness of the broth mingling beautifully with the seafood. Toss me the bread basket and I’ll deal with my infatuation in a passive manner.

On the mains front, make a beeline for the 1824 Beef Tongue Musubi. Chef Loh does her own spin on spam musubi, employing premium Australian beef tongue to good use by brining it for seven days with fennel and coriander seed and then painstakingly sous-viding it for 30-hours. Monkey head mushrooms rounded up this melt-in-your-mouth incarnation of Modern Hawaiian. I kept nibbling at it long after I was full, mentally plotting subsequent permutations. Perhaps with a steamed bao?

As much as the Snake Rivers Farm American Wagyu Flat Iron Steak tantalises, what you’ll want every time is the Grilled Mangalica Pork Rib Eye Steak. And trust me, your hips and thighs will curse sweet profanities at me. You’re welcome. It’s slated to have a higher fat-to-meat ratio, so be warned! Forced artistic attempts at squiggling pineapple rum sauce across the plate may not be the most appealing, but damm you if you were to let it go to waste; it’s tartness, akin to char-siew marinade, adds a strong narrative to the over the top affair. My idea of paradise would manifest in a bowlful of that choganjang jelly, unfortunately you’ll have to practise ‘fastest fingers first’ with this glorious treat. The dish edges further into fresher ground using confit purple potato and mushroom kimchi.

The execution of Morsels’s desserts was a mixed bag. As much as I loved the Signature Milo Tiramisu, I was bummed that the more interesting sounding Taro Semifreddo had a flimsy texture and discordant flavours in its circus act of textural clowns. On the other hand, the 2013 Maculan Maduro Vino Dolce Veneto was the perfect nightcap, a ruby-red philosopher (or inducer of the same genre) finished with a woodsy-sweet dosage of fruitcake weighing in heavily with liquor.

In a nutshell, Morsels isn’t the fanciest restaurant in the neighbourhood but it might just be the engaging. To be frank, it will never be the poster child for adaptive reuse in Singapore which is fantastic if you’re looking for a unique dining experience. Come by during lunchtime for an omakase meal priced at $45++ or $65++ per person or for dinner, the “Chef’s Selection of Dishes” is priced at $85++ per person. Great for flavour explorations and the occasional culinary incitement with the rest of the heathens.

Insights
The Age of Giants in the Sharing Economy: To Eat, To Shop, To Invest or To Read Chinese Literature
Insights
Investment Take: Are You A Loser If You Are Not Up 30% in 2017?
Insights
Will Funan 2.0 Follow the Same Fate of Dying Shopping Malls?
Property
Walton’s Investment Products Now Shariah-compliant
Trendsetters
Andrew Walsh