Nanyang Sauce Is Worth Your Salt Ask any Generation Z Singaporean if he has the ability to name any local soy sauce brands off the top of his head, and you’ll probably be greeted by a deer-caught-in-the-headlights look. It’s not improbable to think that there are no existing brands of such niche production on our local shores, much less one that’s 60 years in the making as a family-run business. Nanyang Sauce treads on such fine constitution with a light footing in the local market, downsizing from a larger production as a subsidiary brand known as Swan Brand in its heyday. Currently, their aim is to make the best soy sauce in the world, right here in Singapore. A lofty goal indeed, but upon first taste, you would know that they are on the right track.

In my household, soy sauce is an indispensable ingredient. Beef stew, spaghetti, dumpling soup noodles, yong tau fu soup; soy sauce is the unsung hero in all these dishes. While certain cuisines call it blasphemy, truth be told, soy sauce is a healthier way of passing the salt. “Fermented food is seeing a renaissance period right now,” says Ken Koh, a third-generation owner of Nanyang Sauce. “It’s always been known that fermented foods are good for you, but only with the recent contribution of science towards proving this theory that people are starting to recognise its significant benefits.”

Founded in 1959 by Ken’s grandfather, the hidden agenda behind the soy sauce production has always been to feed the masses with a product that’s been made with love. A passion project by his grandfather who had moved from China to Singapore in his 40s, the sauce had been a family-kept recipe for the longest time. Nostalgia became a good shepherd to the initial inspiration behind the backyard brewing, and all it took was a sample mould of the yeast, which thankfully he had diligently brought along for the ride, and production found itself on its way. Soon, he was beginning to peddle his goods off a tricycle. This continued from 1951 to 1959 before he made the executive decision to purchase a piece of land to ramp up production. And in good old-fashioned Hollywood movie style, he was so overwhelmed with gratitude towards what Singapore had done for him, that he set out to name his business Nanyang (南洋 is a romanticisation of Southeast Asia as a new civilisation).

But, in between its pioneering years and it’s 60th, laid many turning points. Some more precarious tripping stones than others, like the sudden passing of his grandfather from cardiac arrest to the relocation of their premises to make way for multinational corporations during the Asian economic crisis. Ken had not always shared his grandfather’s dream of business continuity, instead, his parents who were heavily involved in the production, promotion and sale of the Swan Brand soy sauce during his very impressionable adolescent years were adamant on pushing him out of this sunset industry. It worked. Ken went on to lead a very successful training consultancy company for 14 years after a meritorious tertiary education. It wasn’t till 2 years ago that he realised that his parents were wearing out. It was a pragmatic choice for Ken as he wasn’t going to let his grandfather’s legacy fade away. Since then, he had picked up the slack and found their niche in the saturated condiments market business through gifting. 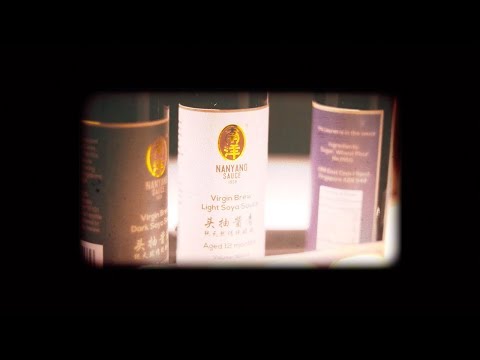 “Food is emotive. You can taste it when food that is made with love,” Ken says, justifying the decision to focus on smaller production volumes that are more skewered towards taste than mass to meet supermarket demands. Nanyang Sauce has no place on the shelves of your commonplace NTUC at the moment but they plan to make a comeback through a subsidiary brand—Golden Swan—produced by Nanyang but piloted by a shorter fermentation period. More importantly, the company subscribes to the same methodology—no chemical production.

And if you’re of the belief that soy sauce is unhealthy for you because it’s high in salt. Think again. Soy sauce was invented as a means to stretch salt. Owing to the tragically long distances from inland China to seaside provinces, soy sauce was evolved to adapt to more effective transportation. By virtue of natural umami, it has less salt content, yet is packed with more flavour.

At Nanyang Sauce, you can forget about those massive manufacturers capable of producing chemical hydrolysed soy sauce in just under a day (the $2.80 price tag on 5 litres of sauce is a dead giveaway—there’s no actual fermentation of soybeans involved). Nanyang soy sauce is produced the au naturel way and “Boy, it is not sexy,” assures Ken. Ken gamely shows us around the facility. A short climb up to the 3rd floor reveals a bird’s-eye view of the largest collection of vats in Singapore kept in apple-pie order. We observe as a woman takes a paddle and proceeds to stir the bottom of each vat in large broad strokes patiently and methodically. He ushers us to the unloading dock where large bags of Canadian soybeans are stacked up. Here at Nanyang Soy Sauce, beans are 100% non-GMO and despite their smaller yield and size, which command higher price tag, these beans are tried and tested to respond better to fermentation. Fine salt is from Australia and local sugar is thrown in the mix. Although there are no secret ingredients used in production, it lies in the source and technique. The full involvement of Ken’s 93-year-old Mother till this very day is an evident sign that craftsmanship is key to creating a boutique brand.

We peek into the fermentation room where boiled, steamed then cooled soybeans are mixed with wheat flour and mould before being spread out on big bamboo trays using just three adept strokes. They remain there, perched on metal racks for 4 days till the white dusted beans turn a ghastly shade of green. From there, it’s a waiting game as the fermented beans are mixed in with salt solution and dispensed into vats, diligently stirred till they are deemed ready for its next step of production. Nature takes its course and beans are left to ferment under the sun for 9 months. While the large amount of variants present is a terrifying prospect to most business owners, it is simply how things are done at this famed soy sauce factory.

“It’s like having a baby,” laments Ken, “and just like any parent, we’re proud of what we created and even more happy to serve our customers.” One of the passionate advocates of this age-old craft, Nanyang gets a lot of support from ardent home cooks and zealous hawker clients alike. Both adamant on feeding their ‘loved ones’ with nothing but the best. The virgin brew is extracted at first press, subsequently, more salt water is added to the whole beans and left to ferment for a couple more months before the product is extracted for the second brew, the premium. Ken explains the range of prices within a line-up of single soy sauces from the factory, the most expensive being first press. There is a method to this madness. I think we are headed for a world of invested interest in specifically cultured products where customers purchase whole vats and commission the brewers to age it for specific periods that might even stretch past 24 months. It makes sense as an asset that appreciates in value over time. Its glossy sheen developing a richer and more layered texture, speaking in complex umami notes.

“The West is also looking to Asian cuisine for food ideas and we are benefitting from their insights,” says Ken as he discovers new uses for by-products such as the soybean sediments being packed into cakes and sold as ‘vegan cakes’ or the harvesting of salt crystals at the bottom of the vats which he sells as highly-priced soy salt crystals, best flourished over a priced wagyu steak. Chef Shen Tan, founder of private dining ‘Ownself Make Chef’ most recently roped in the help of soy lees to dry age pork. The possibilities are endless.

At this point, I don’t think you’ll need convincing anymore. Almost everyone knows that fermented foods are seeing a major comeback. But also remember that old is gold and if you’re looking to live till a ripe old age, the secret is in the sauce. And as I ferret out the number of older folks actively working on the soy sauce factory floor, there seems to be some mysterious truth to this.

Style
Build a High-Tech Home Gym With These Items
Features
Meet Desserto, the Company Changing the Future of Leather
Features
What Mindfulness Is and What Meditation Isn’t
Insights
Market Thoughts: Roses Are Red, Violets Are Blue, We’re Outta Here, Won’t Wait for You
Travel
Are You Travel Ready, Travel Reserved or Travel Reluctant?

Nanyang Sauce Is Worth Your Salt
By Sihan Lee