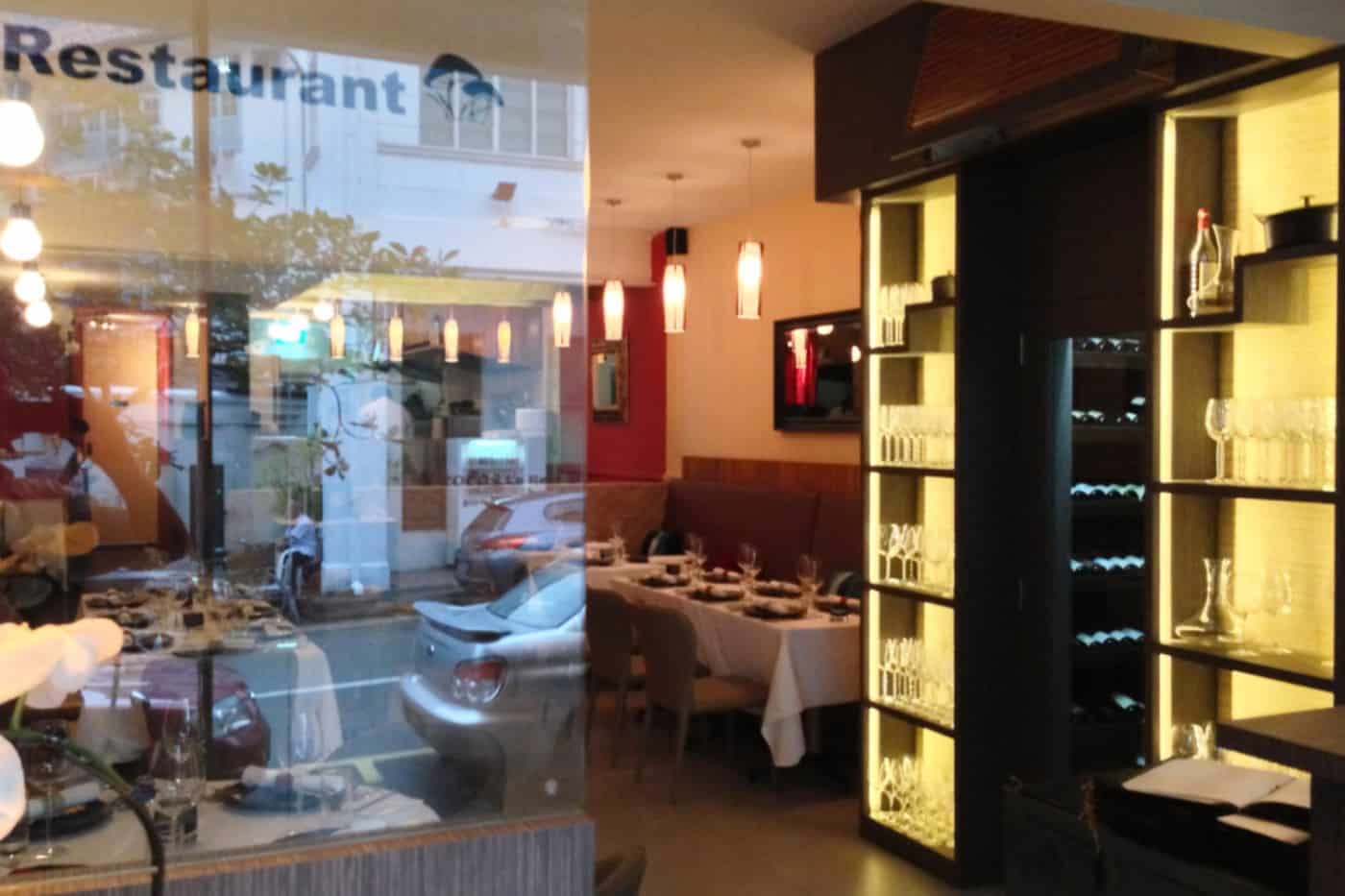 Diners have choices in the many restaurants that have sprouted in the Keong Siak vicinity. These old shophouses have been given a facelift with the opening of these restaurants. As a result, the whole vicinity is buzzing with diners and finding a parking spot can be challenging if you decide to drive there in the evening.

One notable eatery is Nicolas Le Restaurant at side street, Teck Lim Road, which was founded in 2007 by chef and owner Nicolas Joanny. He has many years of experience working in Michelin-starred restaurants in France, Italy and Singapore. When it first started, the restaurant was located at Keong Siak Road. Chef Nicolas took almost a year of sabbatical leave in 2012, and returned towards the end of 2012 to restart the restaurant at its present location.

Occupying the ground level, the interior of the restaurant has a homely and cosy feel, with a bar in the middle of the room. Chef Nicola has a commanding view of the diners from his open-concept kitchen. And I can see that most of the diners are his regular customers as he comes around to greet them.

There is no a la carte menu, only one tasting menu at $98++. You basically eat what the chef cooks. If you have any dietary restrictions or food allergies, let the chef know and he will make the changes to the dishes. There are 5 choices for the main course—from meat such as pork, pigeon, beef and rack of lamb to Atlantic sea cod. The menu changes every two weeks according to the seasonal produce as Chef Nicolas believes in the freshness and quality of his food.

One of his appetiser mainstays is the confit New Zealand Hen Egg “A La Coque” with Iberico ham and olive oil bread. This was beautifully cooked with a dash of truffle essence.

The second course was the Sicilian red prawn ‘Gamberro Ross’ with green lentils, asari clams bouillon infused with Iranian saffron and crispy fish skin. Two crunchy prawns in a small bowl were cooked to perfection with the rest of the ingredients infused in espuma.

Chef Nicolas’ sojourn in Japan has an influence in his cooking as well—evident from some of the ingredients used. The Hokkaido scallop was cooked in a robust lobster broth with yuzu and sakura ebi.  The dish was highly addictive and the scallop had a nice sweet after taste.

The Provence-style ravioli was cooked differently from the typical Italian style. Here, it was given a light touch where confit tomato and Western Australian black truffle were added to exude an aromatic whiff in the gravy.

For mains, I chose the Tasmanian Pasture Rack of Lamb that was simply roasted with Ras El Hanout spice. It came with a lamb sausage as well and pumpkin sauce. The lamb was tender and moist and there weren’t any traces of blood.

One of the restaurant’s specialties is the Iberico ‘Presa’ pig cooked in hay. While the pork looked more like beef, it had no ‘porky’ smell or taste and was cooked with finesse. The other meat dish—Aged Angus Beef Tenderloin ‘Rangers Valley’ reduction of port wine (to add $12/-) also deserved the thumbs up. Both meats were succulent.

To end the meal, there were three types of small desserts served on a plate—creme brulee, rich chocolate cake and a scoop of ice cream which went well with the cake.

The serving staff were friendly and efficient and took pains to explain the ingredients in each dish. This is definitely one of the better French restaurants and I would definitely come back again.

Opening Hours:
Lunch (Tuesday to Friday):  from 12 pm
Dinner (Tuesday to Saturday): from 6.30 pm
Closed on:  Sunday and Monday