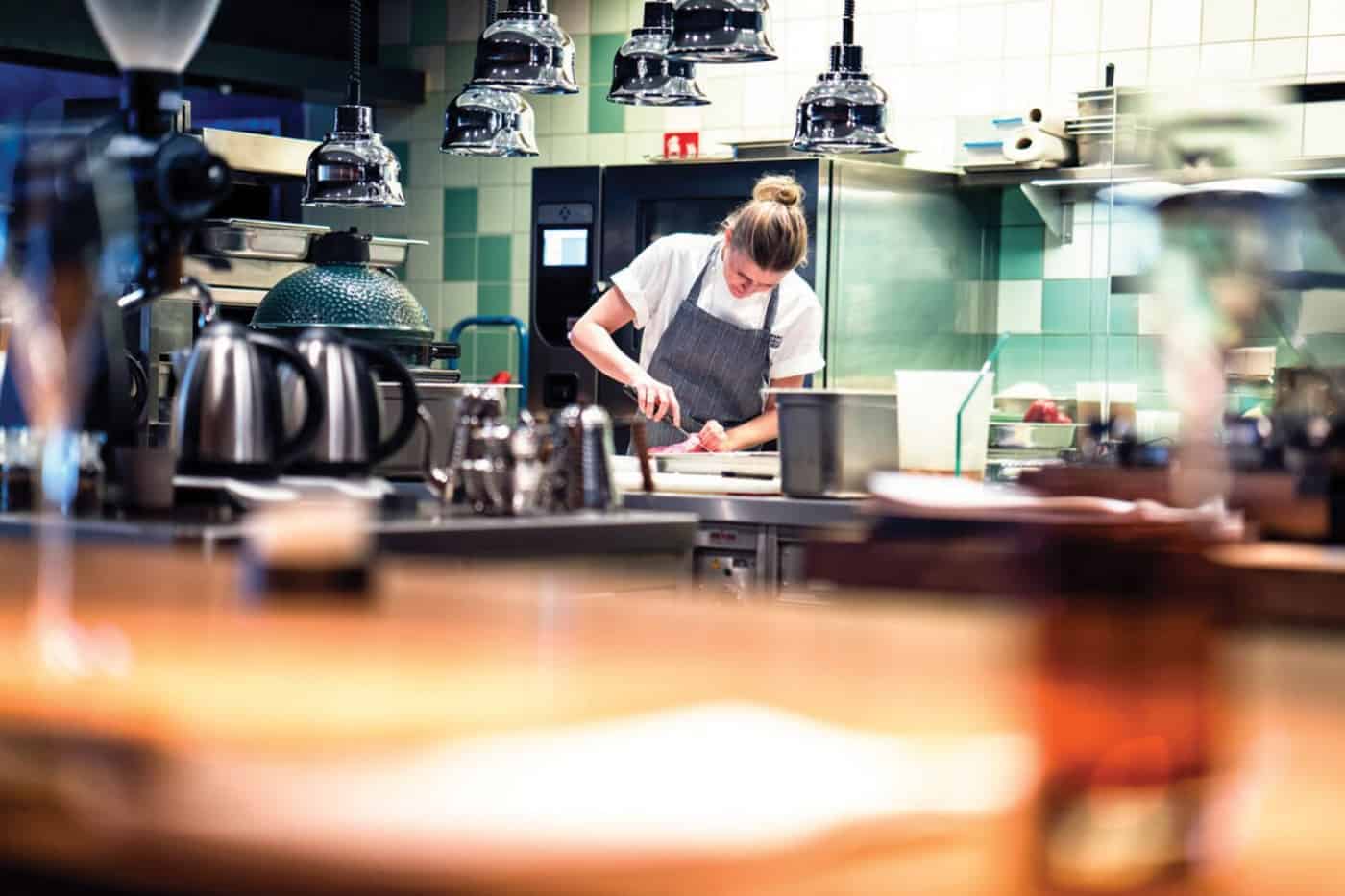 “Hi, my name is Sihan. I figured since we’re going to be here for a while, we should get to know each other”—an awkward handshake followed, together with a modest smile. Three hours into my short 72-hour layover in the city of Berlin and here I was, warming up to the sheepskin covered seats straddling the open kitchen countertop of one of the hottest and most controversial restaurants in Germany. Good start. As the night unfurled, never did I realise that this technology handicap, combined with Bill Wagner’s furtive attempts to make you drunk, would incite such an intriguing relationship between three strangers dining at Nobelhart & Schmutzig that night.

‘Brutal’ and ‘Local’ are not two words that one would usually pair together. But here at Nobelhart & Schmutzig, these estranged adjectives give an ethos to the kitchen’s music—setting the tone of the seasonal menus and managing diners’ expectations simultaneously. I, for one, knew not to expect pepper, chocolate nor citrus fruit on the menu. What fell between the cracks was the draconian seasonality of the menu. It was early October, and I was significantly more grateful for the pad of kale that had fallen fortuitously on my plate during one of the courses.

Owner, Billy Wagner’s philosophy is a stroke of genius and suggests the pertinacious attention to detail—Brutal Local—a modern, hard-headed dedication that strictly limits ingredients used to those sourced from nearby regions (the furthest being salt which comes from 400km away). It is evident that the restaurant cherry-picks its farmers, touting the merits of the pike, cucumber and venison with aplomb with every dish. However, Berlin, unlike the more fashionable capitals of the Scandinavian countries, does not have much of a spotlight on the gastronomical technicalities involved in using local produce. Naturally, Billy had his work cut out for him, but it didn’t take long for his groundbreaking attempts to be recognised—Nobelhart & Schmutzig received its 1-Michelin star in its debut year (2015), and placed 88th in the World’s 50 Best Restaurants in 2018. Aristotle once said, “No excellent soul is exempt from a mixture of madness,” and I experienced first-hand the madness/magic, and it was as the kids say, deeply triggering.

What you’re going to get is hardly debatable, everyone gets the same 10-course menu (95 euros) at dinner. Apart from the rare tweaks for the fussers who can’t have spice, or tolerate the comforting slaps of gluten; the kitchen team is more than happy to make tweaks to satisfy customers. The menu reads: ‘Please take memories, not pictures.’ Instructions are crystal clear. And if you’re defiant enough to break those rules, an attempt at using your phone will result in a lashing from the bearded captain. And mind you, he doesn’t mince his words, so please stow away your phone.

Back to the food, you’ll warm up to the malty depths of the oat infusion tea served in a jumble of ceramic vessels. Shavings of white radish perched above smatterings of yogurt on a cracker is called to your attention. It’s not entirely delicious, but oddly moreish in its soft cadence of acidity. Strips of sorrel and leek are thatched together akin to a children’s art piece and covered in a blizzard of ground fennel seeds. ‘Schmutzig’ translates to ‘dirty’ after all and you’re advised to get in there with your hands, fret not, warm towels are on standby. The crispy chips, a mash-up tart green apples and warm liquorice from the fennel dust will have you resorting to shameless licking of the fingers. It strikes the palate with resolve, burying its tangy roots into the flavour memory.

From the middle of the open kitchen, a pot of freshly churned soured milk butter is summoned. You listen to the synonymous crunch of freshly baked sourdough loaves under the weight of pressed hands wielding a bread knife. The introduction is done, and you ogle as the lid is lifted to present a whole urn of chilled butter that is manipulated by wooden oars on to your plate. The accompanying warm sourdough bread forces you to up your carb intake.

An innocuous piece of pike sits gingerly in the centre of a shallow bowl. It has been slow cooked arduously in brown butter following an exhaustive deboning process, which the server describes as a ‘chef’s nightmare’. Still, amidst the claims, I felt the soft scraping of a bone plunder my throat on its way down. I breathed a sigh of relief when no further damage was done and lurched back to the limpid onion broth highlighted by rivulets of linseed oil.

More interesting is the braised cucumber showered in tarragon oil with a heap of brined mustard seeds. It turns the humble cucumber into a pleasing bruiser. The nice lingering spiciness of the apple oil brined mustard seeds singing in sweet harmony with the gentle twirls of cucumber. They provide spoons too, so that you can sip up the sauces with dignity. Every plate going back to the kitchen, spanking clean.

The next dish of Kale and Horseradish is a killer idea. Who knew that you could take kale and braise it in apple juice, verjuice and butter? Clearly, they did. It is served with lashings of horseradish on the side with more grated horseradish. It’s a total eye-opener, especially after you attempt to shovel down a huge schmear on a wimp. Don’t.

There’s a short pause in between and you are allowed time to finish up the glass of Crozes-Hermitage you’ve been nursing for ages. A Blaufränkisch is brought to the table and after listening to Billy’s justification as to why this would be oh-so-perfect with the next venison, it is poured at will. Sitting on the fringe of the kitchen, one can feel the pulsating energy of the chefs through to the vigorous chitter-chatter of the other diners on the other side of the room. In that moment, time stands still, the lively Schnabel Blaufränkisch filling in the gaps (with liquid courage) amidst the blossoming relationship between myself and a fellow solo diner. There’s magic—in both the food and air.

The last savoury of Venison is thrilling and I remember its tenderness vividly. It is brushed with wild sage bush oil which imparts a refreshing minty flavour. The accompanying black cabbage cementing the fact that Nobelhart and Schmutzig are vegetable whisperers. Another dish that stays with you is the potato/apple. Mash infused with smoked butter has so must pizzaz, it does a little dance across the palate and you enjoy these transient moments between bites of the apple that has been butter-poached into submission. Call me old-fashioned, but there’s nothing quite like a good potato dish to steal my heart.

Desserts are light and brisk affairs. The Mühldorfer wheat beer in oat fusion tea is a celebration of toasted malt and bitter hops interlaced with just the right amount of cream. A grilled pear is teamed with sour malt buttercream and it’s not a disappointment.

At the end of dinner, you’re released into the cold with parting provisions. A box containing a shard of caramel modelled on real vulvae. Yes, it’s a strange collaboration between them and the Artist collective Vulvae—thus explaining the queer display features in the window. They’re provocative enough to make anyone stop and stare at the pulsating red and purple figurines up front, oblivious to the culinary sorcery that takes place behind the heavy velvet curtains. Fun facts aside, Nobelhart & Schmutzig has unknowingly won my affections. It’s an ode to the rebels and misfits—those who dare to challenge the conventions of fine dining in Berlin. The restaurant has taken these rigid notions and trampled on them, while adding their own magic hipster dust—which also includes music from Billy’s awesome vinyl collection. At its poorest, it is not without flavour of life from the land, and at its best, it is transcendent. I pour out onto the street, shivering like a leaf in the wind—uncertain if it’s the cold or the deluge of emotions I’ve encountered.

It’s 10:30 pm; four hours have passed since I first set foot into the labyrinth, and I am bewitched.