One Bowl Restaurant and Bar: Char Siew That Will Bowl You Over 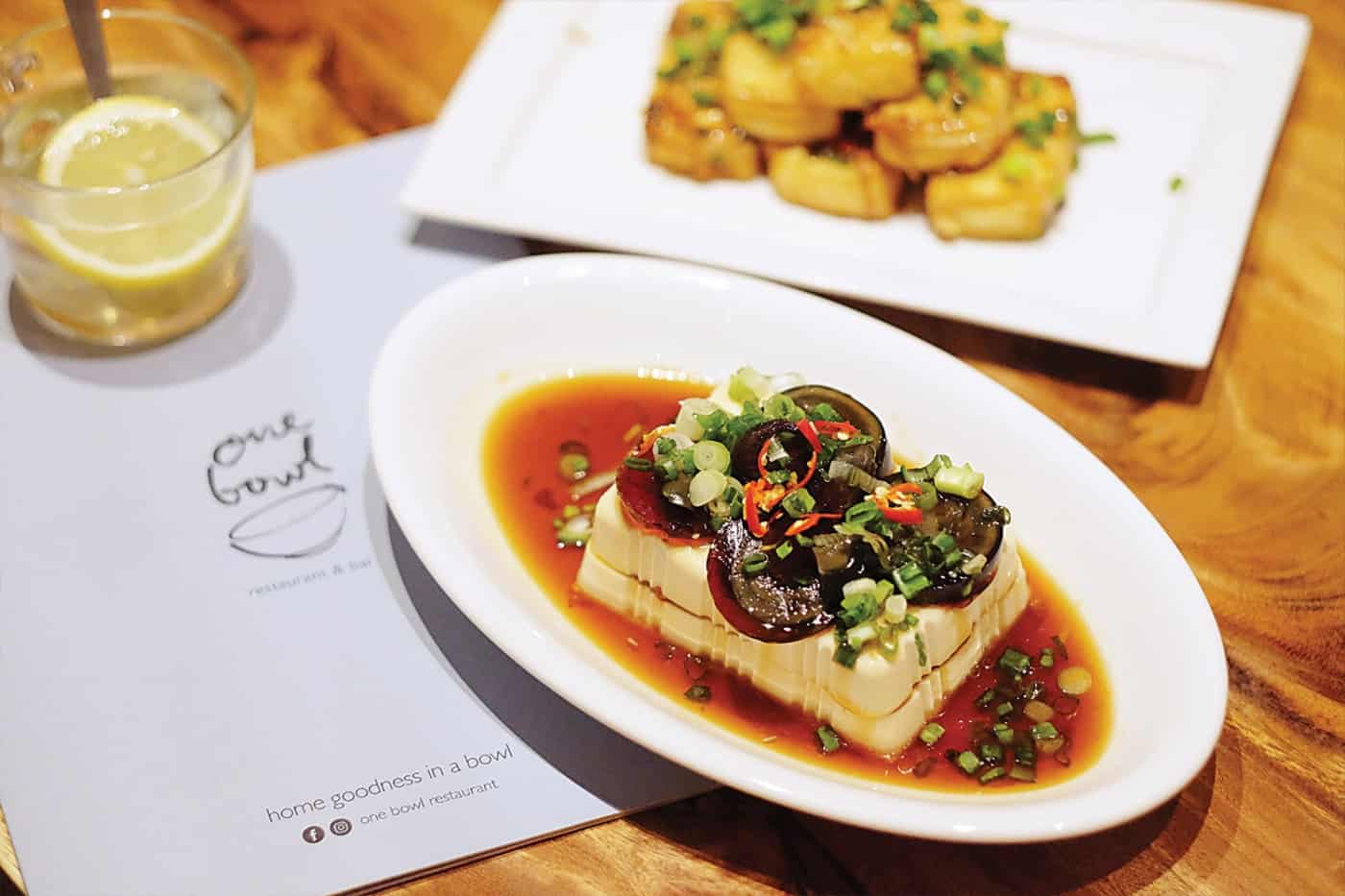 You’d think that Jalan Sultan is more than accounted for in the halal food front since you’ve got halal dim sum, and even a late night ramen joint that closes its shutters only at the break of dawn. So when One Bowl Restaurant and Bar garnered raving reviews for their stellar char siew, we were curious to see if this rabble rouser’s porky business was actually laudable.

As soon as you step into One Bowl, the first thing that hits you isn’t the smoky, burnt aroma wafts but whiffs of hotel lobby perfume. Yes, the restaurant is situated in the lobby of Sultan Hotel, a heritage establishment that construes similar values as the home cooking done in the kitchen. The second thing, the ornate flower designs on the stripped back walls composed of colourful Chinese ceramic spoons—bonus points for the clever link back to the bowl concept. Helmed by Head Chef Tammie Loke, home cook turned chef, they specialise in char siew, which manifests in various forms—sandwiched between golden fried mantou, perched on garlic fried rice and prone over freshly tossed egg noodles. All of it, underpinned by a distinct smokiness, the slightest bit of raw sugar coating releasing deep, resonating sweet vibrancy between lardaceous meaty layers.

One bite in and all suspicious has fled. It may not be the best char siew, but it tastes damn good.

While the char siew is the main drawcard here, it’s also worth trying the rest of the sides. If you’re in a group, bank up share plates for a more substantial dinner. The Cold Tofu with Pork Floss and Century Egg has no pretence, the sneaking slices of chili padi mildly bludgeoning the senses. Get the Ngoh Hiang, these golden pillows exposing the kitchen wizardry and perseverance. Also worth a shot is the Braised Tofu with Ginger sauce, order all three, kick back and work up an appetite for the kitchen’s main act.

The traditional dishes are interesting and mostly successful. The Claypot Rice with Salted Fish and Chinese Sausage lacks the char that one would usually find in a hawker version but it’s elevated by punches of smoky lap cheong and hunks of salted fish. The Pig Trotters in Vinegar and Egg walks the same poorly trodden path with the astringency from the vinegar a little off kilter with regard to the large doses that were added without the piquancy of ginger heat to balance that out. The unctuousness of the stewed pork was a little lacking, the flesh beckoning to be returned back to the stew for a good hour or so. Appearing a little more triumphant is the Signature Char Siew Rice which involves five gorgeous lacquered pork slices served with omelette over garlic rice. This is a fantasy version of your poor man’s lunch. It delivers huge hits of flavours that will see you hunkering down into your chair, sipping on vegetable soup between bites and experiencing nostalgic fits about childhood dinners. The Signature Char Siew Noodles works too—the oleaginous stain of melt-in-your-mouth char siew lingering even after you’ve wrangled the last of that curly, elastic egg noodles.

Desserts are simple after-thoughts, just like a treat that one would expect when dining at mum’s. A scoop of yuzu sorbet, black sesame ice cream or matcha ice cream ringing in the same fuzzy feels of an after school treat scored for cleaning your greens off your plate. For a refreshing palate cleanser, one would desire after a lardaceous feast, hone in on the aiyu jelly with aloe vera; despite its simplicity, there’s something ultra appealing about this citrus dessert and you’ll be hard-pressed not to end off your homestyle meal with this one.

One Bowl Restaurant delivers big on the lunchtime pleasures without taking a toll on your pocket. Caramelised pork, when done well, is a hard thing to dislike and this humble joint is serving it with a bit of flair. I will be trudging down again, sooner than later.

Insights
Deeper and Deeper In The Widening Gyre: The World of Derivatives
Style
Gabriela Hearst Drops Latest Handbag on Net-A-Porter to Fight Covid-19
Dining
One Night in Bangkok: 2 Meals and GrabBiking Between One Too Many Cocktails
Insights
Just Try Not To Lose Money To The Black Swan
Insights
A Suicidal Time for the Markets