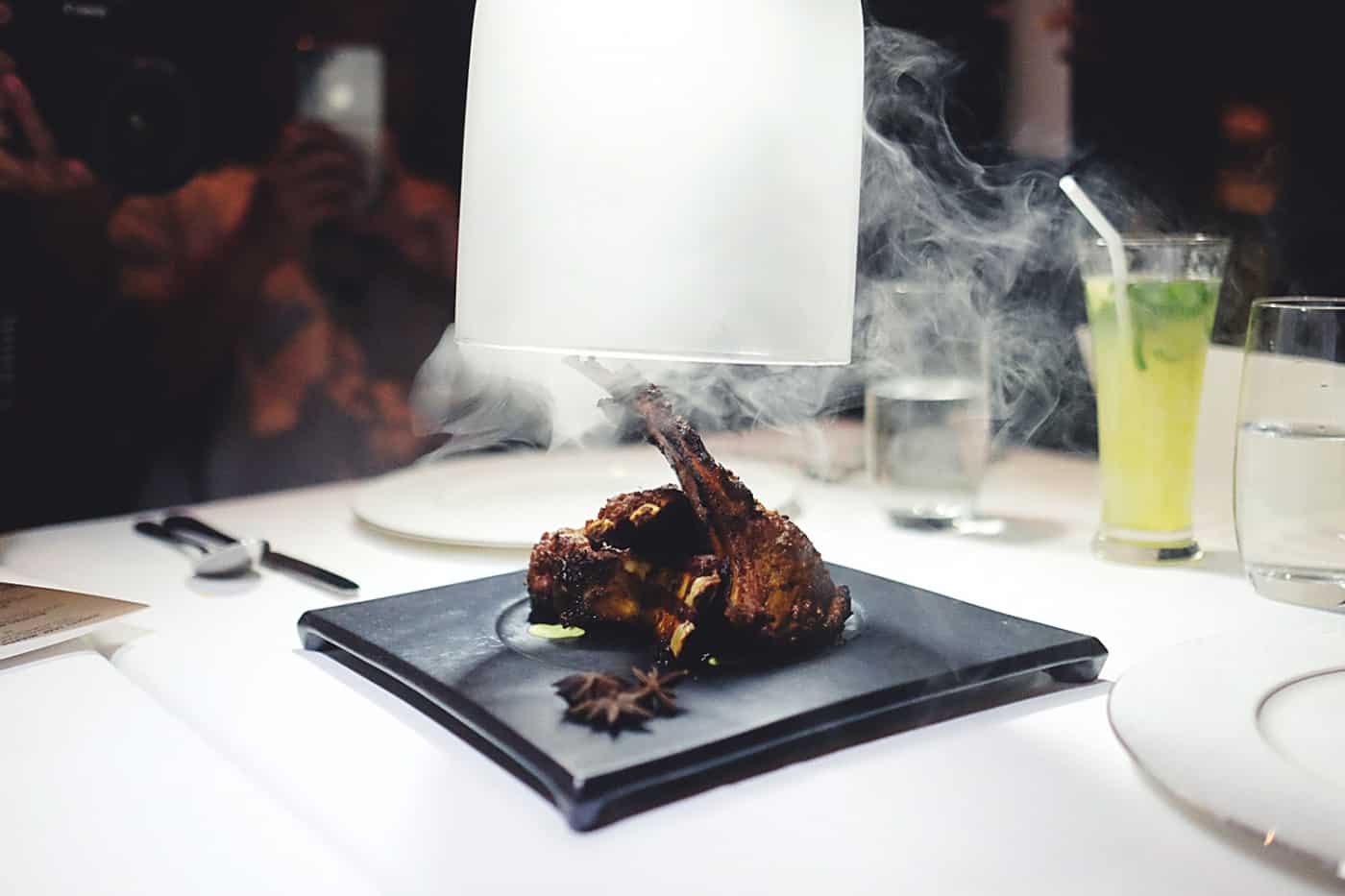 Every so often, I wake up to an unexpected invite that doesn’t involve the latest incipient opening. Rang Mahal, is one such example of a fine dining institution that has paved its way to success, with deep-rooted beginnings initiating from 1971. Fortunately for me, my latest relationship endeavour with a British-born Indian and the integration with his family has got me dwelling on the topic of Indian food. Gujarati cuisine, primarily vegetarian with a distaste for the allures of alcohol, is opening my eyes to the multifariousness of Indian food. It is representing the essence of Indian food and its diversity traversing state lines, uprooting false impressions that dining ‘Indian’ could only mean butter chicken with a side of naan.

When you enter, a sneak peak of the private room creeps up on the left. It is filled to the rafters with a rambunctious crowd feeding off the perilous joys of alcoholic grape juice, the ceiling high sliding doors serving to blockade that infectious riotous movement from the main dining area. The interior boasts carpeted floors and tables set with white tablecloths, lighted by muted dangling light fixtures—it’s regal aesthetic flaunts opulence and intimidates, but the amicable staff is quick to put the jitters at bay. The room speaks of unfettered tradition, the shadows touting mysteries heady with myths of kings and rajas—a feel that is quickly disappearing in most fine dining restaurants, and I revelled in it. A small family across the room touting a young child celebrates a birthday, the room erupts into song, and congratulatory messages are exchanged over banquet tops. It’s heartening and the service staff feeds off the crowd’s energy, dishing out the courses with more enthusiasm.

The food is crafted by Chef Milind Sovani, a man whose character towers above his humble stature. He reveals that his recent long-term residency in India has inspired his switch in culinary direction for Rang Mahal. ‘Fine dining with modern sensibilities’ as he coins it, means respecting the authenticity of India’s regional cuisine, elevating it, yet having it grounded in age-old roots and traditions. He has designed it to be served family style. A tough act when shedding the image of fine dining—artistically landscaped dishes upholstered in a watercolour palette in favour of larger plates that, to be honest, drew a dramatic response as one would expect from the former.

A large papad littered with a colourful potpourri of crispy lentil, onion, tomato and chilli draws gasps across the table. Shaped with the aid of an inverted wok, its size and explosion of colours leave no room for subtlety. This kept everybody busy for some time. Then there was the ensemble of kebabs, an otherwise mundane submission that rebelliously flaunts a Swiss invasion with a pot of luscious cheese sauce perfumed with a hint of tomato makhni. Butter chicken lovers will take to this like a fat kid who loves chocolate cake. A variety of interesting herbs such as holy basil, kasuri and fenugreek take centre stage in the grilled meats, allowing guests the option of savouring the artistic palette of Indian spices individually, followed by a quick dip that its altercates its flavour structure. There’s no denying that grilled meats and cheese make a delicious kind of sense.

The next course includes gentle references to street food—Pani Poori, founded in the city of Varanasi is not something that I’m unfamiliar with. The mention of it evoking flutters of anticipation, mainly because my last experience was unforgettably gastronomical. Plastic chairs, a flurry of hands and loud conversations just off the streets of Kuala Lumpur in an inconspicuous Indian vegetarian restaurant, the tiny parcel imploding with ferocity on the palette. Touting white linen and immaculate glassware, I was expecting a revolutionary, if not elegant, innovative approach to the same dish. Unfortunately, the decision to encourage self-assembly (inspired by Masterchef), resulted in a misrepresentation of the ubiquitous snack. It didn’t help that the measly portion of fillings was miscalculated in relation to the spiced water. I resorted to sipping on the tamarind flavoured water to ease the appetite.

The mains, which are easily shared, range from kerala style coconut vegetable curry to masala lamb stew blanketed with soft eggs. They beckon to be accompanied with billows of soft basmati rice; the glistening grains alone setting it above the crowd. The vegetable curry is delicious, the coconut oil gliding the dish into richer territory. A must order is the Dhuwandaar lamb chops marinated with a special spice blend along with caramelised pineapple and ginger garlic marinade. The tandoor contributed to a lovely crust, and the mighty sear locking in robust flavours. Applewood smoke adds to the pageantry of fine dining. It’s unnecessary but allows for fantastic photo opportunities.

For desserts, the Lychee Kulfi hogs the limelight. Made with a practised hand with dense evaporated milk and peppered with fresh lychee bits. The cold dessert is a massive flavour bomb with humble beginnings from cooking milk over the stove for prolonged periods till heavy with nutty nuances. A good reminder that sometimes the simplest things, can also be the most rewarding.

As far as Indian fine dining goes, I remain unpersuaded to fork out a sum of money in favour of a heaping plate of dum briyani. But for what it’s worth, a restaurant such as Rang Mahal, dredged in age-old traditions and inspired by modern food movements is attention-grabbing. Inspirations by Chef Milind Sovani and his respect of Indian food diversity translating into tasteful dishes are hard to come by.