STERN Luzern: Warm and Inviting, without a Hint of Austerity 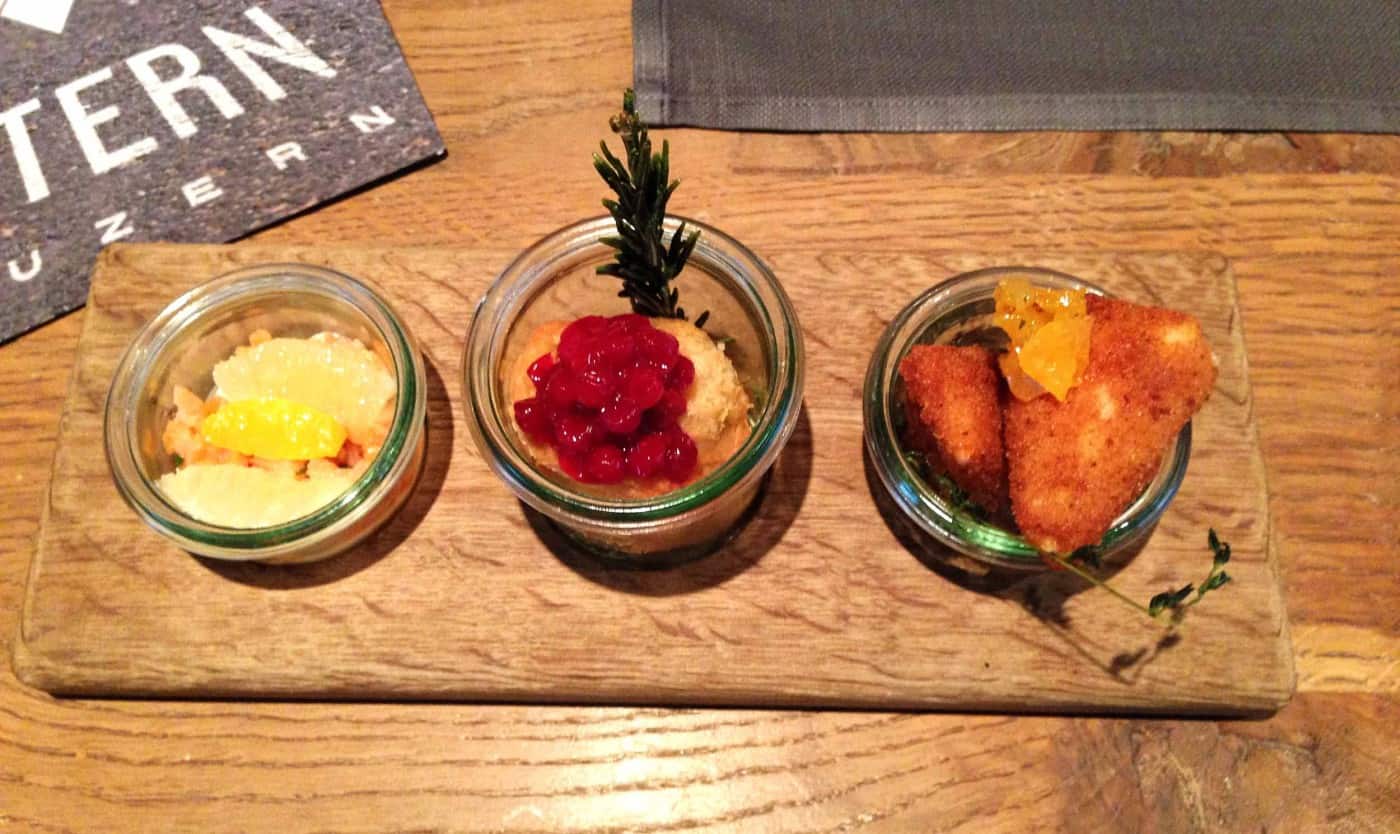 What do the Swiss eat? A quick thought pops into my head: rich, decadent cheese fondants and out-of-this world chocolates that are so orgasmic, it is guaranteed to put you on cloud nine? Surely, there has to be more… and they can’t all start with the letter “C”. My search on Wikipedia tells me that the cuisine has regional influences (French, German and Italian) but the underlying premise is hearty, yet simple – potatoes and cheese are their household staples.

In Lucerne, many flock to admire the Lion Monument (a sculpture designed by Bertel Thorvaldsen to commemorate the Swiss Guards that were massacred during the French Revolution) and take lovely strolls on the Chapel Bridge. Yes, it was breathtakingly beautiful – insert all the amazing words here. But, I, for one, was more focused on eating a quintessential Swiss meal.

“You won’t regret it!” That’s just one of the many glowing reviews from TripAdvisor that STERN Luzern had been receiving. Interested? Very. It’s even ranked number 2 out of 273 restaurants in Lucerne. I made a faux pas of not making reservations in advance and they were fully booked on a Friday night. Surprisingly, I was let down very gently and was propositioned to return the next day for lunch.

The name did throw me off – however, there was nothing stern about the restaurant. In fact, it was warm and inviting, like chestnuts roasting on an open fire. Interiorly, the dining room was deceptively cosy, with earthly wood furnishings that make you feel right at home. Elements of modernity were present, which added distinct character to the restaurant.

Waiters at STERN were gregarious and had a spring in their step, paying attention to the needs of patrons. They weren’t pushy or tried to hard sell on their “specials”. After a few minutes of placing my order, the Shooting Stars arrived – STERN’s creative form of amuse-bouches that were presented in a glass jar. The 3 delightful creations: baked Dallenwil goat cheese with dried apricot, two kinds of smoked salmon with citrus fruit and the doughnuts filled with venison and mushroom topped with cowberries were all very enjoyable and delicious. Each possessed lightness and delicacy that teased my palate.

There was a relatively long wait before the main courses were served. I don’t know if the kitchen was under staffed but other diners were also getting a tad bit restless as I overheard the occasional, “Could you check on my chicken cordon bleu please?” Portions wise, STERN was hardly stingy and served up comfort food that would give you enough energy to climb Mount Pilatus. The vegetarian autumn plate consisting of homemade spaetzle, red cabbage, sweet chestnuts, forest-picked mushrooms, cowberries and apple, surprised me as I did not think that I would like it that much. Nevertheless, the carefully well-thought-out ingredients packed bold flavours all around.

The freshly caught fish from Lake Lucerne was lightly seasoned and the homemade croquettes were fried to perfection. The meats fared better though. My absolute favourite was the saddle of alpine lamb from Uri served on barley with vegetables because of the rustic touch. The STERN Hacktätschli (Swiss beef patties) with mashed potatoes, gravy and carrots, appeared to be a healthier version of a Sunday roast sans the Yorkshire pudding.

Desserts were delightful – the vermicelles (sweet, flavored chestnut paste) with Amaretto and meringue reminded me of my Play-Doh days. While, the small warm chocolate cake made with Felchlin Grand Cru chocolate had intensity and each bite brought me a bit closer to heaven. The caramel pudding topped with cream could use a little more ‘excitement’; nevertheless, it was still enjoyable.

It is hard to think of a better restaurant than STERN if you would like to experience hearty, yet gratifying Swiss cuisine in Lucerne. Just be prepared to wait a little longer for your mains to arrive.

Insights
Are We Done With Demonising China?
Property
Frasers Property Is Gearing Up for the Future of Work
Trendsetters
Chelsea Scott-Blackhall
Insights
Forget Time Management. Attention Management Is More Important.
Insights
The Perks of Being an Early Riser