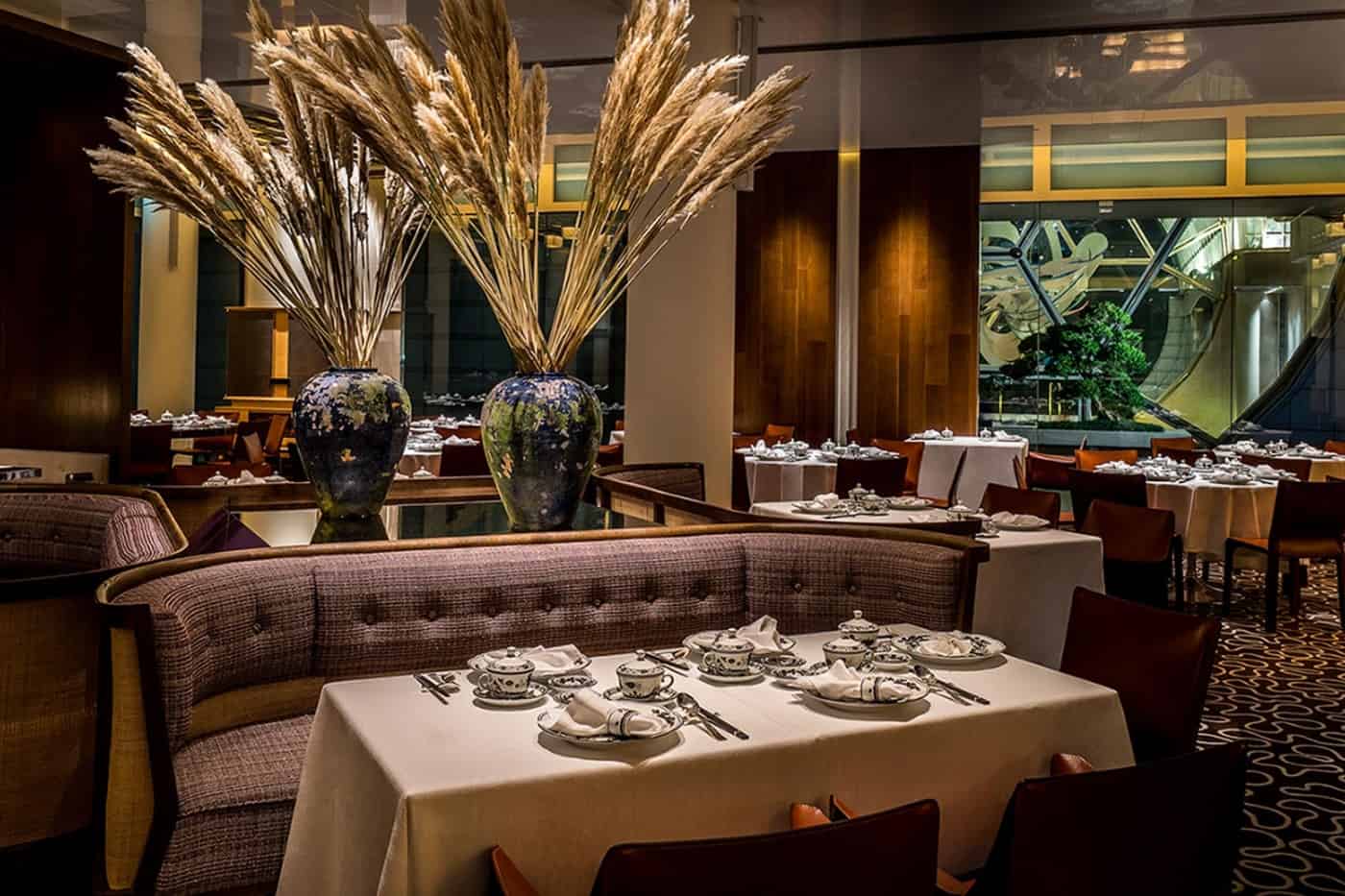 Summer Pavilion has always been associated with fine Cantonese cuisine. Late last year, it underwent a major makeover. With a new facelift and a revamped menu, it was no wonder Summer Pavilion was awarded 1 Michelin Star in the Singapore Michelin Guide 2016.

The main dining hall used to be an open area. Now, it is surrounded by a modern Chinese garden and a glass pavilion. The interior is elegantly furnished and has a modern feel unlike a typical Chinese restaurant. It can accommodate approximately 120 diners with some specially designed booths for privacy.

Even the cutlery depicts the “new” Summer Pavilion status. They all have eye-pleasing floral motifs and come in various background colours. Although it was full house when we went there for dinner, the restaurant was not noisy. One reason for this is that the spaces in between the tables are set at a distance where it is difficult to eavesdrop.

Executive chef, Cheung Siu Kong who hails from Hong Kong, helms the kitchen. The design of the menu is consistent with the floral theme of the restaurant. There are wide choices with dim sum (available for lunch), a la carte items and also set menus. Prices have also gone up with its new found Michelin star fame.

I always have the bamboo clams with garlic sauce whenever I visit. I ordered this dish again ($15 per piece). It certainly did not disappoint. The garlic sauce was fragrant and it brought out the sweetness of the clam. Some vermicelli was added to make the dish more tasty.

Instead of the peking duck, I opted for the marinated smoked duck, Chinese tea leaves (half $38, whole $76). The duck was well marinated and the meat was soft. I liked the fleshy duck which yielded little fat, and it was a good alternative to the traditional peking duck.

For a vegetarian dish, I had the braised beancurd, bamboo piths, mushroom, seasonal vegetables (small $28, medium $42, large $56). The beancurd complemented well with the other ingredients. It was a substantial dish on its own.

I thought the steamed sweet dumpling with sesame paste was another run of the mill “tang yuen” which you find in most Chinese restaurants. Here, the dumpling stood out for its quality and it was not chewy. Every bite of it was an absolute delight.

Service at the Summer Pavilion was attentive and efficient. The service staff paid great attention to details. When I commented that the almond beancurd was bland, they apologised that the dessert was not up to our expectation and would bring it to the attention of the chef. This is what “good service” should be, and it certainly merits a return visit in the future.

High Profiles
Dinesh Bhatia
Features
The Curse and Blessing of Anonymity in a Big City
Insights
ONE Championship Launches Their Own Version of ‘The Apprentice’
Insights
Why Failure Is an Important Part of Success
Insights
Lunar New Year Special: Why The Only Pigs We Like Are Dead Pigs