What It’s Like to Dine Out During a Pandemic 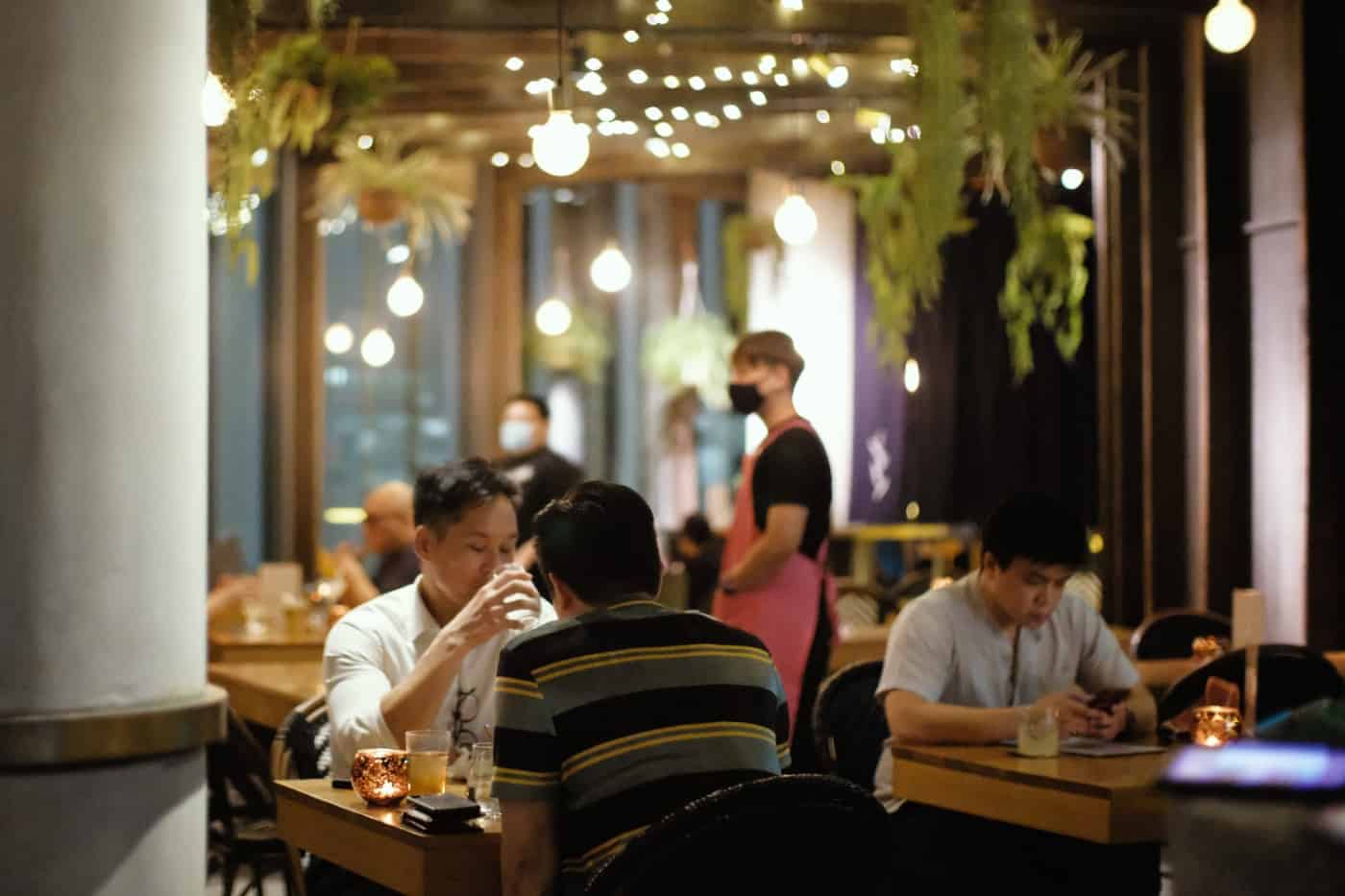 On June 19, restaurants were allowed to resume in situ dining, and reservations were through the roof. You could almost sense the desperation in some of the patrons, who had to resort to lukewarm deliveries and trial-by-fire cooking to satiate their cravings since the circuit breaker commenced.

I avoided the first two weeks of “freedom,” predicting that a spike in community cases would be inevitable. So when a friend suggested a night out in town last Friday, I was nonplussed by my conflicting emotions. Sure, I was eager to chow down on food that I didn’t have a hand in preparing, but also apprehensive about navigating a changed F&B landscape. What if I hated this new normal? And was I garang enough to go out?

I willed it as an occupational hazard and plucked up enough courage, partially fuelled by daytime drinking to hit up a couple of new spots with a friend. Clearly, there were new rules put in place to avoid the onset of a second wave: temperature checks and contact tracing procedures upon arrival, social distancing seating between your groups of five, masked staff and more stringent safety processes in food preparation and service. The one that threw me off my game the most was the abrupt halt of liquor sales and consumption at 10:30pm. ‘But that’s when the party’s just getting started,’ you’d mumble forcibly under your breath. Let this be a warning to you: do not flout the rules at an establishment’s expense. We’ve witnessed Moonstone endure a $1,000 fine and a terrifying sentence of being ‘ordered to close indefinitely’ after enforcement officers noticed unconsumed alcoholic beverages on the tables past the stipulated time. It’s a hefty price to pay, especially after the lockdown and with the F&B industry’s already crippled financial situation. They cannot take another blow. Be considerate and start early if you want to imbibe copious amounts of booze.

At 5pm, I was nursing my first drink at The Old Man—a bar along Keong Saik Street that takes inspiration from literary giant Ernest Hemingway’s muses. From his profound love for rum to his living-on-the-edge mentality, these are all manifested in cheeky, albeit spirit-forward tipples that are conjured with the help of state-of-the-art equipment and modish techniques.

Entry posed its own trip-ups: the face and temperature infrared scanner revealed ghastly recordings as it was positioned just below a cold draft. The disorienting effects from the fiercely lit outdoors to the pitch-dark interior were testing the phone as it attempted to focus on the QR code stuck to the wall for contact tracing purposes. After a little bit of delay, you’re shown to your usual seat at the bar. Everything feels familiar except a great wall of perspex erected between you and the showmanship bar. It was the elephant in the room and sticky fingerprints plastered on the glass at the end of the night was proof of the separation anxiety. The mask stays on till the first cocktail is placed in front of you. A Moveable Feast #1964 from the new menu was a curious concoction of shellfish infused water, clarified spiced cherry tomato water meets coconut syrup and basil-tomato seed tincture. (Side note: The menu can be accessed via a QR code stuck to the table-top too.) The wild idea translated into an umami bomb of savoury, sweet and salty flavours, leaving you thirstier and hungrier for the rest of the night.

At 7pm, we reached Laut, a new restaurant and bar establishment that opened its doors during Singapore’s lockdown. Although that may be tantamount to suicide, the owners have the mettle to persevere through these unpredictable times. Co-founded by Leon Tan, the former head-bartender at Native and Frank Shen, co-owner of American Taproom, Laut was packed with diners, most of whom I assume were either la familia or people in the know. Marketing, goodwill and a strong network are pivotal towards restaurant recovery, and it was heartwarming to see the regulars coming in droves to support their favourite businesses once again.  The food menu, enthused with seafood dishes, draws inspiration from the name ‘Laut,’ which is the Malay word for sea. Drinks highlight Southeast Asian ingredients and fermented products such as arrack and rum distilled from Malaysian molasses.

After the usual safety procedures, we floated past distanced tables and headed straight to the bar where my friend and I were left to our own devices without a nearby table to eavesdrop on. Oh, how I miss those shenanigans. Small plates of seared tuna on green mango salad, and toasts loaded with flower crab meat and rippled with cilantro oil were bold and creative, showing finesse. Drinks followed suit, a dessert-like tipple of soy milk spiked with Gula Melaka Arrack, lifted by floral notes of chrysanthemum and sour tamarind. The restaurant threads its Southeast Asian theme with agility, perfecting the lure of being new and intriguing in a scene that’s slightly jaded and has cold feet.

Time check: 9pm. Our third and final stop was Roketto Izakaya, where no. 32 in Asia’s 50 Best Bars 2020, Nutmeg & Clove was staging a pop-up cocktail experience for the month. The double temperature takings through the first Fraser tower registration and subsequently at the restaurant entrance itself were annoying. But we stayed the course in light of the promise of martinis. Colin Chia’s rendition comprising the full works of a drinks trolley (thankfully) did not us let down. The food deserved praise; the popular fish collagen broth shot was like a warm embrace while the assertive flavours of the prawn paste frog legs jolted the palate to attention. The combination of Chef Willin Low’s Mod-Sin dishes and Nutmeg & Clove’s hip cocktail programme was tastefully drawn out and executed—and I did not mind seeing more of this marriage.

We concluded the night with a celebratory shot and finished off the remaining drinks with ten minutes to spare. Nobody escapes death but those who approach the subject with sense and sensibility, and possibly a temperature gun in hand are truly admirable. The fear that lurks within all of us about going out and the hurtful remarks like ‘you’ll bring the virus back’ from loved ones won’t go away, but I believe that if each of us plays our part by adhering to the rules, our newfound freedom can be enjoyed. And more importantly, must be celebrated.

Travel
137 Pillars Bangkok Is The Hotel To Stay In Bangkok
Insights
Market Thoughts: Roses Are Red, Violets Are Blue, We’re Outta Here, Won’t Wait for You
Insights
The Lowdown on the Latest Crypto Trend: NFTs
Insights
The Uncertain Days Ahead and Gold
Style
5 Unique Popover Shirts for Men

Spend
Dining
Lerouy ft. Couvent des Jacobins St. Emilion: A Love Story
Spend
Dining
Employees Only Singapore: Where Quality Drinks and Food Are Not Mutually Exclusive
Spend
Dining
Restaurant Review: Jaan Rings in a British Renaissance
What It’s Like to Dine Out During a Pandemic
By Sihan Lee
© 2023 High Net Worth All rights reserved.
Privacy Policy | Terms of Service