What It’s Like to Eat at Mirazur, the No. 1 Restaurant in the World 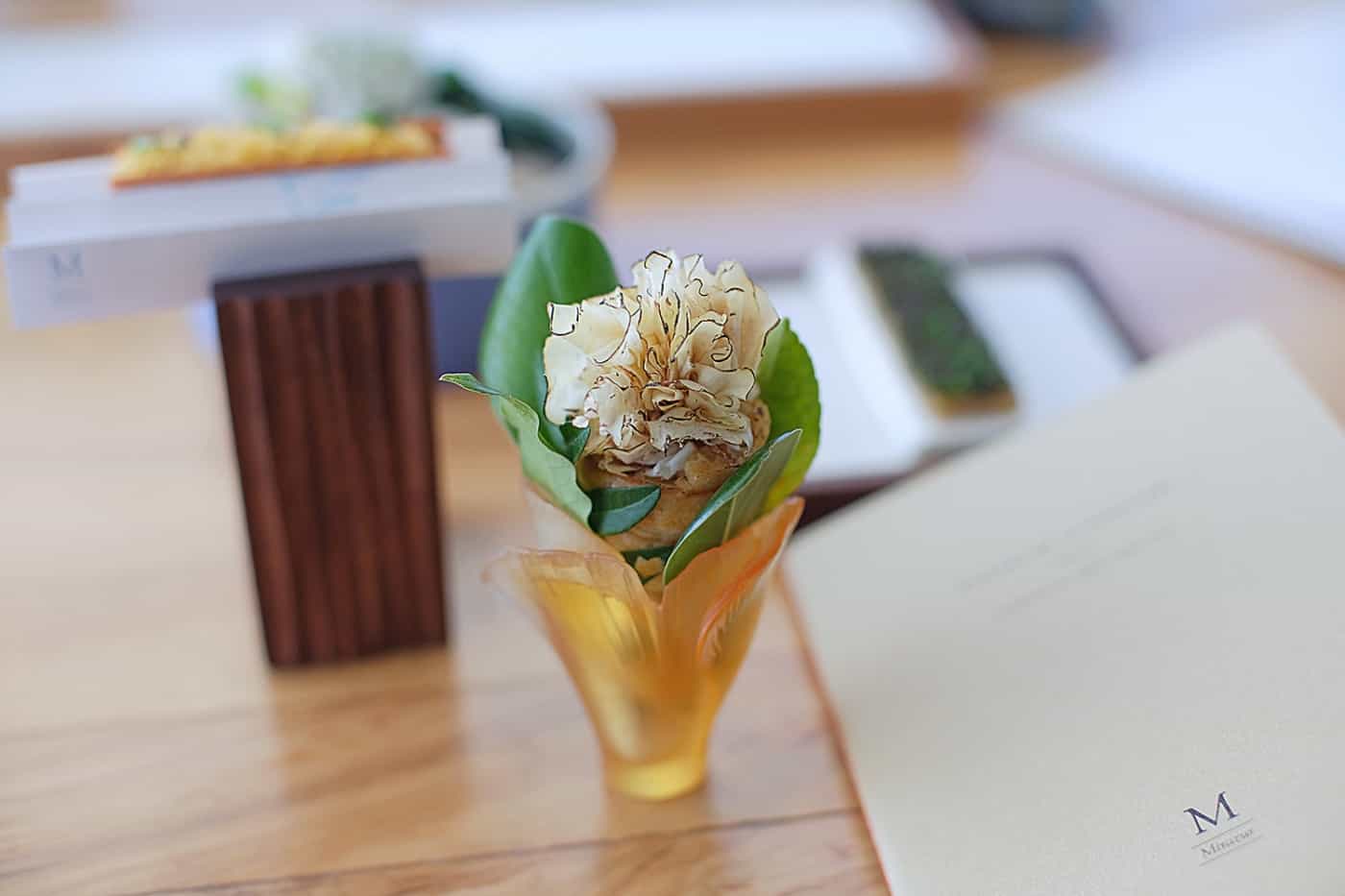 Let me begin by saying that it’s easy to love Mirazur. The kind of love that is worth crossing continents for—and in this case, making a trip to France. The anticipation started to build the minute my plane touched down in Nice, upon laying my eyes on the palm trees lining the promenade leading to the train station. My initial impression of Côte d’Azur was that of a tourist trap, but like any good lover, I was willing to peel back the layers and dig deeper. Hence, my visit in January, dead in the middle of winter.

Luckily, the Côte d’Azur stayed classy with temperatures in the mid-10s at noon and cool sea breezes that would follow. It was a stark contrast to the London winters I had just emancipated myself from, and so far, I adored every minute of her company.

Just one hour from Nice by train lies the sleepy Mediterranean town of Menton. Not quite the glitz and glamour of St Tropez or Monte Carlo. Life in the old-fashioned town was calmative. I ascended the cobbled pavements leading up to the 17th-century Baroque style Basilique in the old town and strolled down the Plage des Sablettes. The microclimate gives you the luxury of reading a book under the shade in the day, before you return back to your holiday apartment with a bottle of vino. It’s no wonder this place was so fashionable among the British nobles back in the day.

Leading up to my lunch at Mirazur, (which I had painstakingly booked six months in advance) I thought it was befitting to complete my pilgrimage on foot. 3.1 km, ce n’est pas loin. I traversed the Porte de France, walked past the guards at the Italian border, and was soon transfixed by the pearly gates of Mirazur housed in a 1930s-era rotunda building.

This is the No. 1 restaurant in the world, based on the World’s 50 Best Restaurants list that was announced in June last year. I smoothened out the creases in my pants and tried to maintain my composure, but I was screaming in my head. It hit a deafening crescendo before I was interrupted by a melodic voice, “Parlez-vous Français, mademoiselle?” Earth to Sihan. Since I would prefer the intricacies of the menu described to me in English, I replied: Non, désolée. Very quickly, an English menu, an English copy of the Mirazur book, and a rather charming English-speaking gentleman was expedited to my table.

The floor was filled to the brim with wealthy businessmen and matronly women with light scarfs draped around their shoulders, who let out light-hearted chuckles in response to their husbands’ teasing. Apart from the “Crazy Rich Asians” wannabes across the hallway, I was the only oriental being in the room and perhaps the only English-speaking patron. Still, it was a good sign that the restaurant was able to maintain full occupancy even in wintertime.

You’re at the mercy of the kitchen. The only decision you’ll have to make is whether to mutter the words ‘Univers’ of ‘Éveil des Sens’—the signature 9-course degustation—or not. Then, there’s a more seasonal 6-course menu. After a slight hesitation, I declared ‘Univers’ (S$390 before tax, no drinks) and my fate was sealed. In fours, the welcome appetisers poured themselves out over the wooden table. There was spiced cookie ringed with pumpkin seeds, pork cheek draped on a salsify stick and dusted with pollen, fried tapioca cracker with halibut tartare and fresh marine herbs. But it was a white truffle cornet stuffed with chestnuts and chives cream that increased my fondness by tenfold.

Sharing bread was brought to the table accompanied by the lyrical ‘Ode to Bread’ by poet-diplomat Pablo Neruda—a much-lauded tradition in the restaurant, complemented by olive oil awashed with Menton lemons and ginger.

I had initially wanted to observe sobriety during this once-in-a-lifetime meal, but since I was seated alone in a restaurant perched on a hillside with breathtaking views over the harbour and town; I caved tout de suite. If you, like me, are used to dining alone, you would prefer to avoid the trauma of turning pages of wine lists in search of a suitable tipple. Here at Mirazur, there are seven wines (both red, white and rose) plus four champagnes selected by the chef sommelier to have with your meal. It’s categorised as Verre de vin Blanc, Verre de Vin Prestige and Verre de Vin Blanc D’exception and vice versa for the reds, each with an escalating price tag. The staff first lays down the three wines and allows you to make your preferred choice. The bill will reflect your propriety later.

Sipping on my ‘prestige’ Gitton Père & Fils X-Elis Sauvignon, I dug into a Gillardeau oyster with shallot cream and pear sauce; its slight creamy disposition with fleeting relishes of musk melon harmonising with the nutty bivalve. Next, a server carried over a pot holding two massive beetroots the size of my head. These beets were carefully extracted before winter and then hibernated before being buried again in the soil until the arrival of spring. This double lifecycle allows the beetroot to reach such massive sizes and to acquire more concentrated flavours. Following that, dramatic folds of “red” are flushed in spoonfuls of white cream punctuated by oscietra caviar. As you ravish the dish, the scene awakens memories of sunset, the beets imparting swirls of pink from their warm bodies till the ends of the blank canvas surrender to coat your lips with a beautiful raspberry pink on the last bite. I was beginning to experience chef Mauro Colagreco’s love affair with nature and his surroundings.

The Black Pie was delightful; the thinnest wafer of pastry weighing in heavy when stuffed with Jerusalem artichokes and black truffle. A mesh of black truffle coins cloaking the mess. You should demolish this with only your fingers, so you can almost taste the earth in early spring.

Other dishes served included chanterelle stew with Mediterranean baby squid that fell into the bitter and tangy spectrum of things, the Maison Mitteault Foie Gras with cedrat and a floral chamomile broth, and the John Dory surrounded by a pool of sudachi lime sauce with blobs of fresh trout eggs from Roya valley.

By the time the “Marie le Guen” pigeon hit the table, I was stuffed. But there was a quiet finesse in the execution and layering of yuzu compote, spelt and red wine sauce. I worked through the various parts and concluded with the tender lollipop of pigeon thigh—aka the gastronomic peak. A little slump later, I was rudely awakened by the piquant assaults of the Apple Granny Smith Soup. I have never appreciated the role of palate cleansers or frozen fruit sorbet, but the yogurt ice cream in a crystalline sugar casing, demarcated by a single sprig of coriander leaf, made me a convert.

Subsequently, that paved the way for the final dessert—a groaning mix of burnt rosemary ice cream, cocoa nibs and sospel olive oil hidden beneath a canvas of Grand Cru of Equator chocolate ganache. It brought me back to last year’s World’s 50 Best awards ceremony, that theatrical and almost tear-jerking moment when chef Colagreco went on stage toting four flags—Argentina, France, Brazil and Italy. “Cuisine doesn’t have borders. Through cuisine, everyone can express themselves, wherever they are,” he declared. As I bowed my head in awe of the meal that transcended boundaries and spoke of a chef’s confounding sense of belonging in an environment—I knew there wasn’t a need for embellishing. Though the peanut candy petit four was pure poetry. Mirazur is a wonderful example of how you can better understand your travel destination through eating, and seeing how I was already warming up to Menton, I can safely say that this was the greatest holiday of my life.

Spend
Dining
Lerouy ft. Couvent des Jacobins St. Emilion: A Love Story
Spend
Dining
Employees Only Singapore: Where Quality Drinks and Food Are Not Mutually Exclusive
Spend
Dining
Restaurant Review: Jaan Rings in a British Renaissance
What It’s Like to Eat at Mirazur, the No. 1 Restaurant in the World
By Sihan Lee
© 2023 High Net Worth All rights reserved.
Privacy Policy | Terms of Service