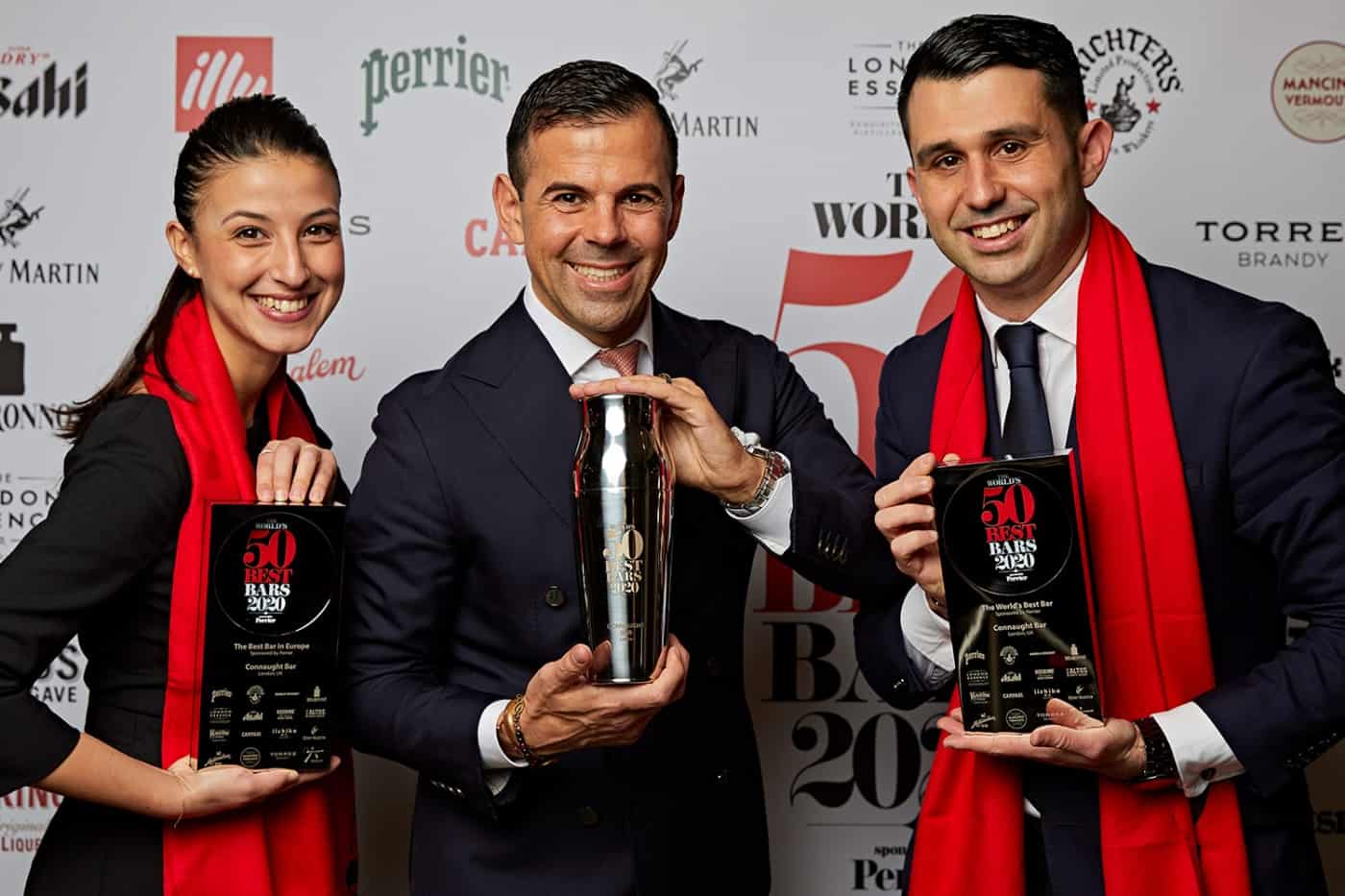 The list of The World’s 50 Best Bars 2020 features bars from 23 countries and London’s Connaught Bar clinched the No. 1 spot to take home The World’s Best Bar title.

Under the masterful leadership of Agostino Perrone, the venue’s Director of Mixology, Connaught Bar stays true to its principles of presenting artful drinks with graceful service in an elegant setting. Designed by the late David Collins, the Cubist-inspired bar celebrated its 10th year in 2018 and is known for its unique Martini trolley, where bartenders give a personalised drinks experience to guests.

At No. 2 is last year’s winner Dante, New York, which also takes The Best Bar in North America title. Coming in at No. 3 is The Clumsies, Athens, while Singapore’s Atlas lands at No. 4 and is The Best Bar in Asia.

The UK leads Europe with nine bars on the list and Connaught Bar as The Best Bar in Europe. London’s Tayēr + Elementary wins Disaronno Highest New Entry Award at No. 5 and Kwānt clinches London Essence Best New Opening at No. 6. Other London bars on the list include American Bar at No. 20, Lyaness at No. 29, Swift at No. 33, Three Sheets at No. 34 and Artesian at No. 41. Edinburgh’s Panda & Sons (New Entry) completes the UK’s showing at No. 32.

Greece sees two bars from Athens on the list, The Clumsies with a record-high position at No. 3 and Baba au Rum at No. 31; while Spain takes three spots with Barcelona’s Paradiso at No. 19 and Two Schmucks (New Entry) at No. 26, as well as Madrid’s Salmón Gurú at No. 22. Italy boasts two bars, with Milan’s 1930 at No. 25 and Rome’s Drink Kong (New Entry and last year’s Campari One To Watch) at No. 45.

New York’s Dante is The Best Bar in North America, sponsored by Asahi Super Dry, at No. 2 in the global ranking. Four other bars from New York make the list this year, including Attaboy at No. 12, Nomad Bar at No. 13, Katana Kitten at No. 16 and Employees Only at No. 38.

Florería Atlántico in Buenos Aires places No. 7 and is named The Best Bar in South America. This is followed by Mexico City’s Licorería Limantour at No. 17, Lima’s Carnaval at No. 21, Cartegena’s Alquímico (New Entry and Ketel One Sustainable Bar Award winner) at No. 47 and Buenos Aires’ Presidente at No. 50.

Singapore’s Atlas at No. 4 is The Best Bar in Asia. Also from Singapore, Jigger & Pony places No. 9, while Manhattan and Native take No. 14 and No. 18 spots respectively.

China leads the way in Asia with five bars on the list, including Hong Kong’s Coa at No. 8 (Nikka Highest Climber Award) and The Old Man at No. 15. Shanghai’s Sober Company is placed at No.42, and from Taipei, Indulge Experimental Bistro is at No. 43 while Room by Le Kief (New Entry) enters the list at No. 46.

Australia places three bars from Sydney, with Maybe Sammy taking The Best Bar in Australasia at No. 11; Cantina OK! (New Entry) at No. 28; and Bulletin Place at No. 39. From United Arab Emirates, Dubai’s Zuma is The Best Bar in the Middle East and Africa at No. 23.

For this year, the voting period ran from January 2019 to March 2020, when the majority of bars were forced to close due to the pandemic.