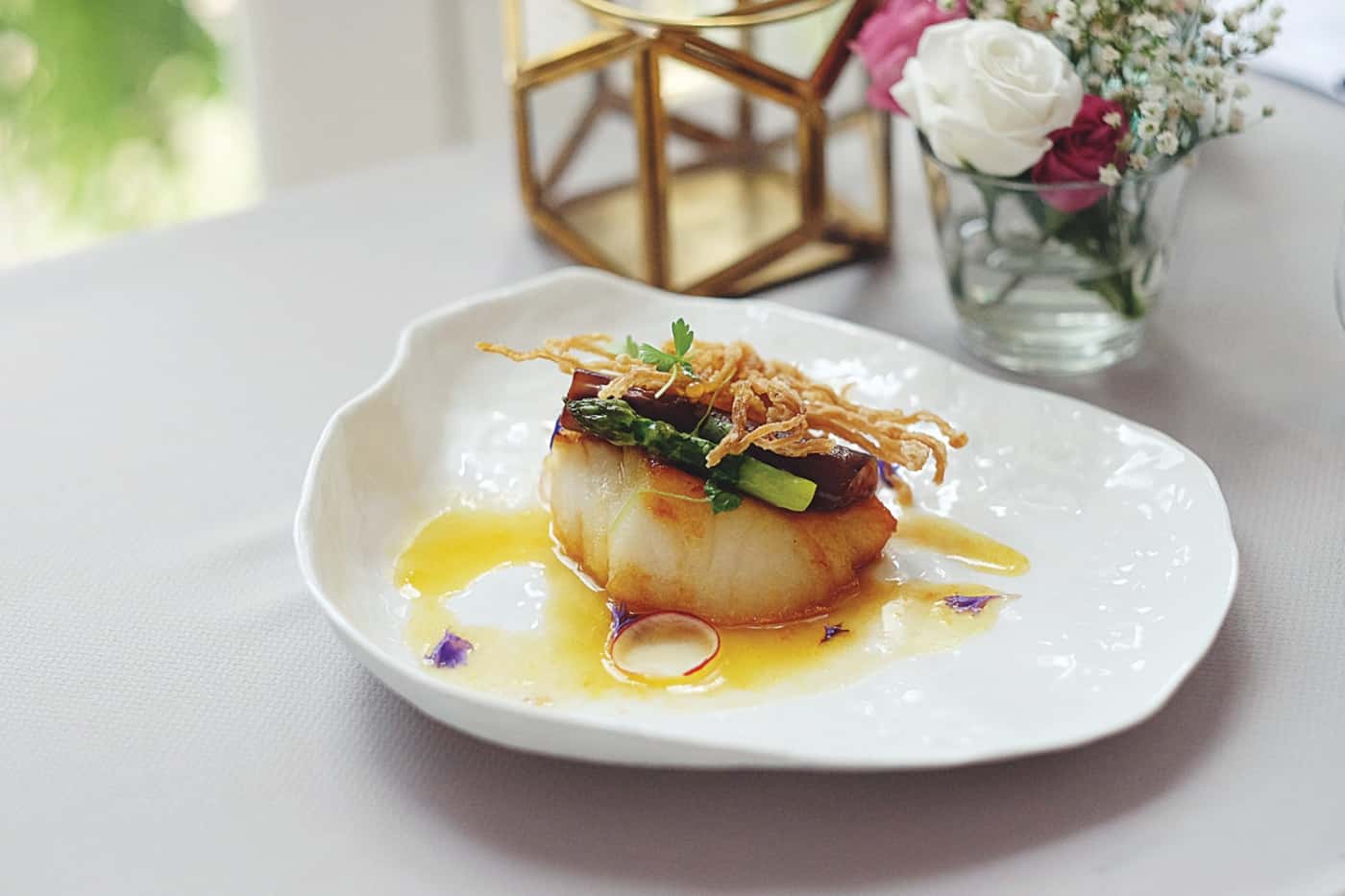 Instead of starting at the beginning of the meal (which the impatient me would deem illogical, seeing as how excited I am to wax lyrical about the later dishes); let’s start at the point of the meal where Xin Divine’s niche positioning as progressive Chinese cuisine made a marked impression. That would have to be the instant I slid back a dainty little meat parcel of Kurobuta Pork Dumplings. Sweet and savoury. Juicy and tender. Spicy and tangy. Garlicky. So. Freaking. Delicious. How can there only be two?

Before your moment of wonder, the Szechuan-style tortellini bathed in an intensely aromatic sauce of Zhejiang vinegar, Szechuan chili and ginger assault the palate, no holds barred. The dish displays a touch of restraint with the regular pooling of chili oil replaced with chili oil suds, that cleverly removes the threat of stained white shirts without compromising on flavour.

Xin Divine is one of those ‘shiny new things’ to have opened up in the Duxton Hill neighbourhood, and so far, the word on the street has been superb.

Its concept is stark and simple, almost as genial as its Robin blue and office grey colour schematics, accented by cheery bunches of baby’s breath and luxe-looking suede chairs. Progressive Chinese cuisine tests the boundaries beautifully for diners who are more familiar with left-field traditional Chinese dining. Here, you’ll find age-old traditional Chinese flavours and cooking methods brought into the modern century via contemporary European culinary techniques. If you are, like me, who is less familiar with some of the regional Chinese cuisine, there’s no better place to get ‘schooled’ than here.

Take for instance, Xin Divine’s stand-out dish, the Chinese polenta, at $8. The perfect portion of a millet and grit based porridge cooked in chicken stock and steamed pumpkin, is not dissimilar to the textures of our local split mung bean dessert. It’s a tribute to Chinese cuisine in Northeast China, which relies significantly on preserved foods, wheat and maize (instead of the usual rice) for sustenance, due to the region’s harsh environment. The ‘porridge’ yields a sweet, savoury profile that is skewered ever so slightly towards the latter dimension with the aid of dehydrated you-tiao (dough fritters), crab slaw and truffle foam. It’s saccharine nature bridging the meal effortlessly into the dessert course to follow.

The kitchen is backed by three chefs of strikingly different culinary background. Chef Leong Teck You, a Malaysian-born Cantonese chef, Chef Zhong Jian Bing, a Szechuan cuisine chef and finally the youngest Chef Alvin Tan from Singapore, with an impressive resume of French establishments under his belt. It’s a clever collaboration, the kitchen serving a mashup of tribute, innovation and cultural amalgamation on a plate. In that light, authenticity is rarely a word brought into discussion, instead, refinement is more highly stressed upon.

I tore through the Chilean Seabass in record speed. An oily slab of fish that flakes with resounding sighs between me and my companion, basks in a pool of sour and spicy sauce flanked by ‘Yu Xiang Eggplant’—a quintessential Szechuan dish accompanied by a gorgeous fan of tempura enoki. What they do get right is their seasoning, and even the commonly overlooked tempura batter leaves a nail-biting trail of spices in its wake. It’s an architectural stunner, presented on a nature-inspired wavy China plate, which I navigated with precaution due to its suspiciously brittle nature.

The Poulet de Bresse however, suffers from the brimming consequences of high strung impulses. French chicken thigh and foie gras are rolled into a tight roulade and drowned in Nu er Hong (a Chinese rice wine originating from Shaoxing), then sous-vide, and flash fried in tempura batter. I would have preferred for the foie gras to be omitted, as its richness takes away from the magnificence of the rice wine.

The Chinese Wine (Nu Er Hong) Shark Bone Soup, to describe it more accurately, an oleaginous bowlful of collagen-rich broth graced with a tender abalone and soft Chinese Cabbage is more desirable. The comfort factor is bumped up a notch with an extra pour of Chinese rice wine. If you’ve missed out on Chinese double boiled soups, Xin Divine’s light-hearted rendition locks in the intricacies of soup brewing in clearer depths.

Those in the habit of pre-dinner tipples are in luck. Prior to clambering up the steps to the opulent main dining room, stop by Divine Bar for a pre-dinner aperitif. Not to be missed are their moreish bar bites such as the Szechuan Chicken Karaage and the XO Carrot Cake. The latter, especially, may sound like a dear snackage, but do not mistake its golden appearance on crispy rice noodles to be just your run-off-the-mill bar snack. Breaking down the dish, bite-sized carrot cake pieces are battered and fried in three types of flour for optimum crispiness. These ethereal cubes given a quick toss with shrimp, sesame seeds, scrambled eggs and a homemade XO sauce formulated with parma ham and conpoy. Call it stoner food or comfort food, you’ll feign politeness in an attempt to score the last spoonful.

Xin Divine may not be authentic, in any sense of the word, but it is devoted, at least in the abstract, to the idea of being innovative. It is a place where flavours and techniques collide on a plate tied together with immaculate service. Come in for lunch and soak in the sprightly atmosphere or hit up the plush joint after dark for a more sophisticated dining experience.

Insights
Crazy Rich Asians: How A Good RM Can Save Your Life
High Profiles
Georgia Lee
Bonds
A Case of Sobriety in the Shrinking Bond Markets
Insights
Market Defiance Part 2: The ‘Covfefe’ Conundrum & The Crash To Come
Travel
Aman New York Is Set to Open in Spring 2021