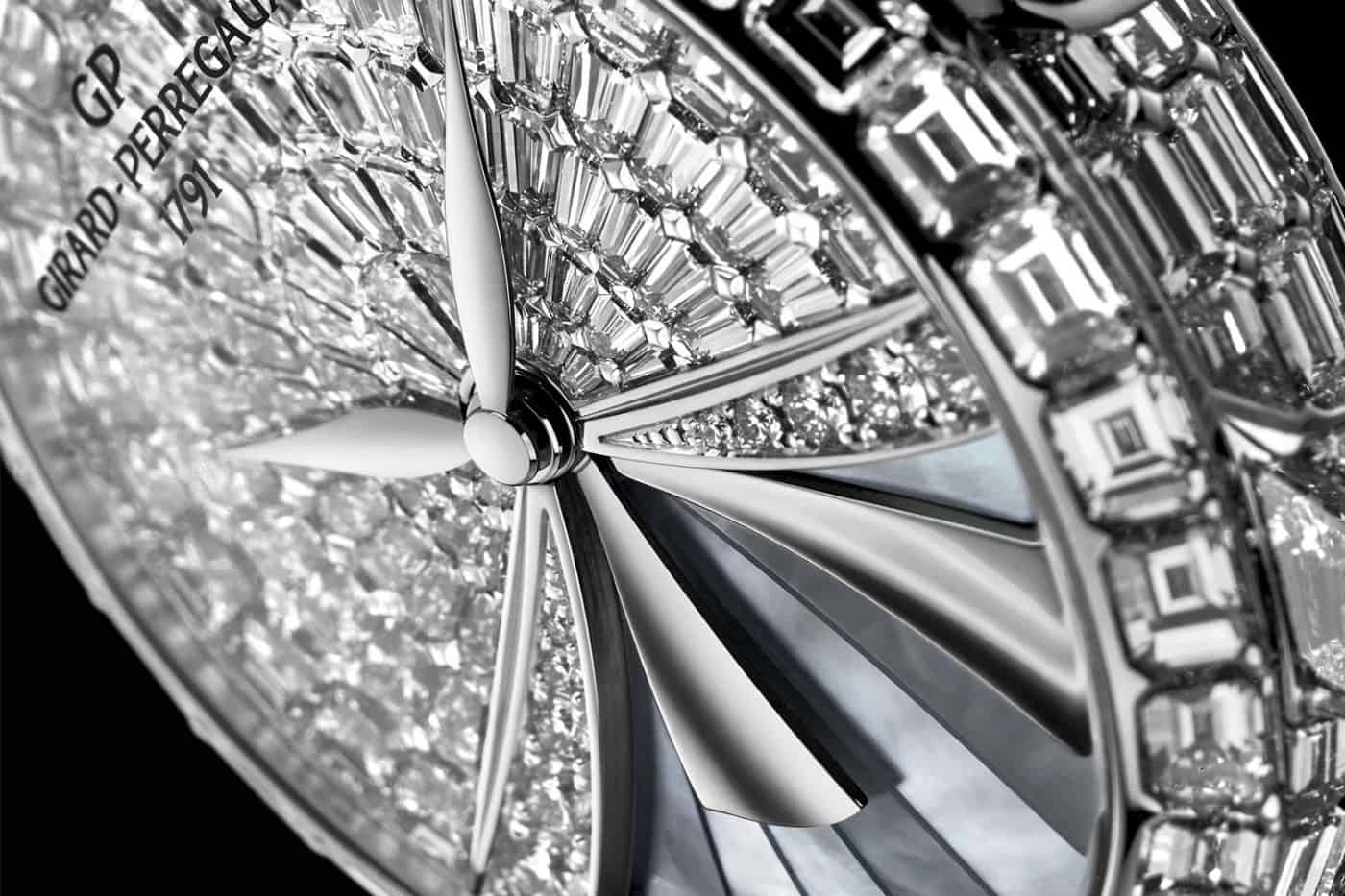 Certain encounters are naturally inspired by the beauty pervading the art world. Girard-Perregaux presents a spectacular creation blending watchmaking – in accordance with the vision of excellence cultivated by the Maison—and High Jewellery. Its name reads like an invitation to ‘La Serenissima’ and its legendary theatre, La Fenice (the phoenix), one of the world’s most beautiful opera houses. An exceptional place is thus honoured by a model that is equally outstanding… and indeed unique, since the destiny of the Cat’s Eye La Fenice is to match the wishes of the woman who will wear it and make it her very own by personalisation.

Spectacular. One would expect nothing less from a model inspired by one of the finest houses in Italy. The pinnacle of international opera is showcased by the magnificent ‘trinity’ composed of La Scala in Milan, San-Carlo in Naples… and La Fenice in Venice. With its neoclassical exterior, its baroque interior featuring fresco paintings, gildings, beautifully arranged tiers and Italian-style partitioned boxes, La Fenice is a creative hub whose red curtain has risen on legendary first performances including Hernani, Rigoletto and La Traviata. Girard-Perregaux pays tribute to this iconic site by draping this model in diamonds, daintily secured by a hand-polished white gold ribbon bow.

A curtain of emerald-cut diamonds

The opportunity of attending an opera at La Fenice naturally commands respect for a certain dress code. Being finely attired is an integral part of the pleasure procured by such an evening. The Cat’s Eye La Fenice is entirely in tune with this festive mood, glittering with more than 200 emerald-cut diamonds of exceptional quality. The dial features a splendid decor composed of 83 emerald-cut diamonds (approx. 3.97 cts), along with 10 brilliant-cut diamonds (approx. 0.21 ct). The emerald cut was initially developed for the eponymous gem, which is subject to inclusions that make it fragile to work with. The rectangular shape of the oblique corners protects it from mechanical stresses. The emerald cut also magnificently suits diamonds, highlighting both their radiance and their transparency. On this model, the setting of the dial and case has been performed using the “Clou de Paris” technique. It consists of fixing several stones around a rod—the Clou— which is then cut and filed to bring it smoothly level with the diamonds, which must be calibrated with rigorous precision. This paving creates a mirror-type effect that magnifies the fiery glow of the gems.

A profusion of colours

The curtain of diamonds is held by a ribbon bow suspended above a cut-out mother-of-pearl marquetry inlay that is hand-painted in subtly graded shades which may be personalised at will. The palette of colours is left entirely up to the woman who will choose the watch. A flurry of mauve, purple or garnet red… Delicate pastels or naturalistic inspiration with moss green or glossy chestnut… The iridescent shimmer of mother-of-pearl reflects the radiance of the diamonds. The colour of the lower dial section instils a resolutely haute couture spirit. Girard-Perregaux offers the owner of the Cat’s Eye La Fenice the privilege of having an alligator leather strap crafted to exactly match the shade chosen for the mother-of-pearl inlay.

Unique in every way

Inside the white gold case of this exceptional model beats an in-house mechanical self-winding movement driving hours and minutes functions and endowed with a 46-hour power reserve. The solid caseback of the watch provides an additional area that Girard-Perregaux wished to dedicate to personalisation. The Manufacture offers a choice of several engraved motifs relating to the theatrical world, composing an exquisite background for the names or messages that may be added.

The aesthetic of the Cat’s Eye collection, which Girard-Perregaux has dedicated exclusively to women, displays a natural penchant for interpreting various worlds in the manner of waking dreams. The Cat’s Eye Sparkle appears in the guise of a creation exuding a magnetic and sophisticated beauty. Like fire beneath ice, sensuality radiates from the dial marrying mother-of-pearl and diamonds in a limpid osmosis. On the other side of this shimmering mirror, a mechanical self-winding movement, crafted in keeping with the proud traditions of the House, forms the beating heart of this newcomer making a powerfully seductive style statement.

Is it a beauty who came in from the cold? The goddess of an endless winter serving as a backdrop for enchanted fairy tales? The Cat’s Eye Sparkle appears to welcome a world all its own within an oval-shaped case set with 62 brilliant-cut diamonds. It composes a supremely appealing frame, much like an 18th century paintings whose oval border was a rare and sought-after ornament in itself. The artisan has manually polished this organic material so as to further accentuate the magic of its subtle colours. Among all the potential chromatic options at its disposal, Girard-Perregaux has chosen blue for the mother-of-pearl cabochons, hand-painted in a delicate shade reminiscent of a frozen lake. This shimmering natural material thus becomes a landscape in its own right, capturing the tender vibrancy of the atmosphere, as well as the gentle beauty around us.

A perfectly proportioned oval of diamonds blooms in the dial centre, playing its own distinctive role amid the surrounding mother-of-pearl. Each gemsetting technique serves a different purpose. Snow setting instils a sense of mystery, since it is imbued with a certain sense of apparent randomness. The jewellery artisan creates the decor directly on the material. One after the other, following an intensely personal thought pattern, more than 200 brilliant-cut diamonds of varying diameters are deftly juxtaposed, to the point of entirely covering the gold surface. Is it instinct or experience that guides these gifted hands? When the gemsetting begins, no one can predict exactly what the completed creation will look like. On the Cat’s Eye Sparkle, the diamonds nestle gently against each other, without any prongs between them to disturb this precious harmony, catch and lastingly hold the gaze. Each dial calls for more than 25 hours of work, along with the inspired expertise of the artisans that instil each piece with a touch of soul.

Beautiful inside and out

For Girard-Perregaux, there has never been any doubt about the fact that ladies’ watches must display the same high technical standards as those that the Maison intends for a masculine audience. This new model is powered by a mechanical self-winding movement designed, developed and crafted by the Manufacture in keeping with the finest Swiss traditions. Calibre GP03300-0101, with its 195 components and 46-hour power reserve, is also distinguished by its superb finishing including Côtes de Genève striping and circular graining on the mainplate, blued steel screws and an oscillating weight bearing the “GP” Tapisserie pattern.

The Cat’s Eye Sparkle is delivered with a midnight bleu alligator leather strap that further enhances the romantic aura of this exceptional model.