Busan: The Ultimate A to Z Guide 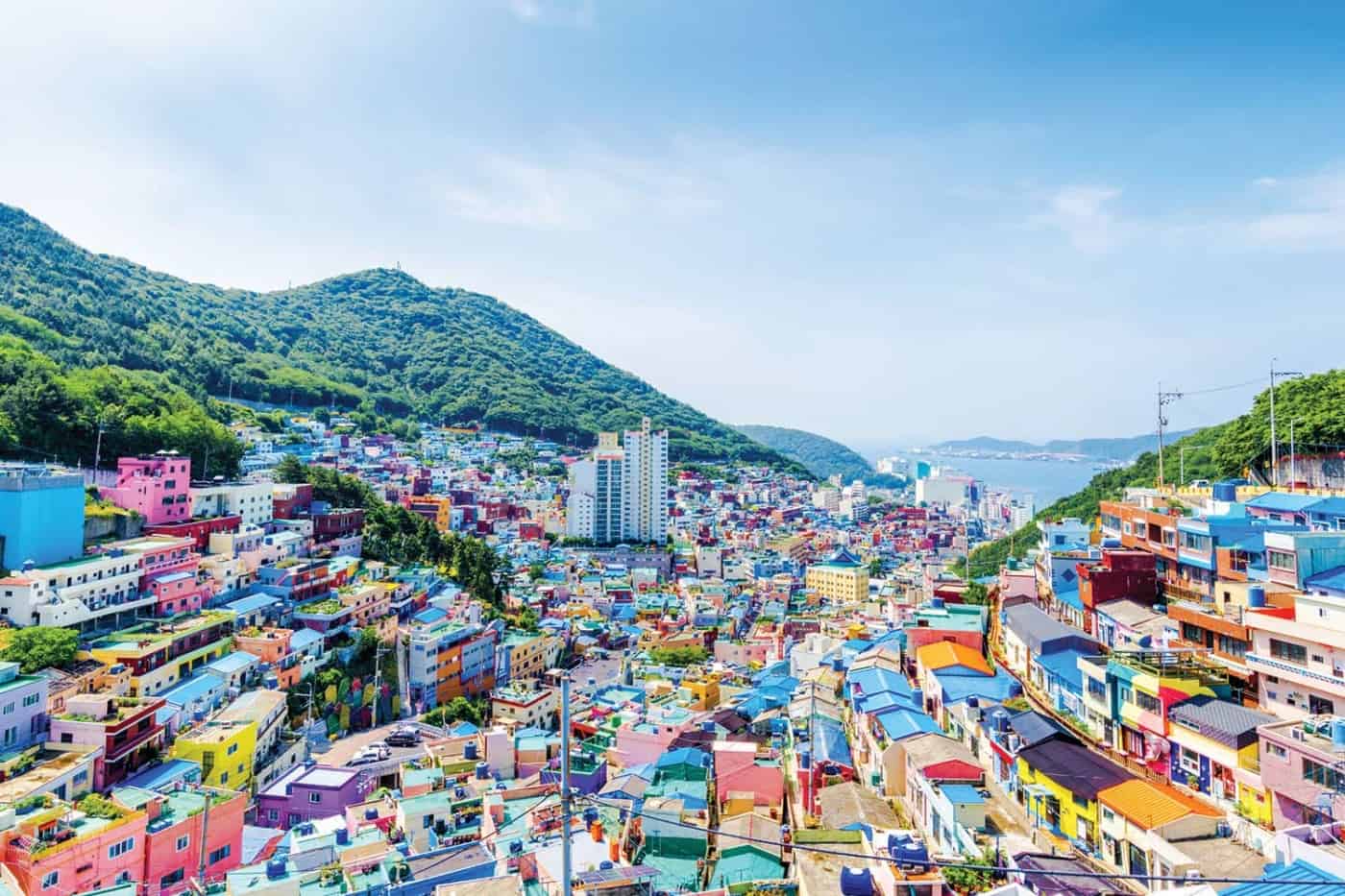 If Seoul is New York, Busan is Los Angeles. Often overlooked by travellers, the “city of tomorrow” (a more low-key, yet artsy sibling to South Korea’s metropolis) is brimming with historical, cultural and culinary gems if you know where to look. Apart from pristine beaches and unparalleled seafood offerings, which typically draw tourists, Busan is also a mecca for Asian cinema and vibrant street art. Discover the other side of this seaport in this city guide.

Bosu-dong Book Street is a singular district flanked by rows upon rows of bookstores that’ll have book lovers all over the world grinning from ear to ear. The locals started selling the books of Japanese colonisers after the country was liberated, which attracted other vendors from South Korea to open second-hand stores. During the Korean War, refugees also sold their books and other possessions here to make ends meet. Eventually, the alley was filled with paperbacks of all genres and languages.

Biggest department store in the world

The official venue of the Busan International Film Festival, the Busan Cinema Center is an architectural marvel constructed by Austrian architecture firm Coop Himmelb(l)au. It boasts a column-free roof, resembling aircraft wings, that spans 85m from one end to the other. Underneath, the glass canopy lights up like a rainbow, creating a film and theatre complex that enthrals even before you enter.

The dwaeji gukbap is the closest thing Busan has to a national dish. A milky stew served with thinly sliced pork, raw vegetables and rice, it’s a modest yet hearty recipe that has a whole alley dedicated to it. Known as the Dwaeji Gukbap Alley, it’s the perfect place to sample as many bowls as you can without venturing far.

Built to keep Japanese pirates away from the city, the magnificent Geumjeong Mountain Fortress can be viewed from a bird’s eye view on a cable car ride. Alternatively, you can put on your hiking shoes and get up-close to the historic stones.

In 2012, German artist Hendrik Beikirch painted a mural of a fisherman across the facade of a 70m-high skyscraper in Busan. A stunning sight that happens to be the tallest mural in Asia, the artwork highlights a group of people in South Korea who are still struggling economically despite the country’s significant growth.

If you are hard-pressed for time and can only make one stop, go to the Gamcheon Cultural Village. It’s been given ample nicknames comparing the technicolour village to Machu Picchu and Santorini, thanks to its rainbow-hued Lego-like homes and quirky art installations and murals. Opened in 1918, it also brings visitors on treasure hunts for souvenir stamps around the neighbourhood—a playful way to discover more about the site.

Imagine a giant glass dome above you and ornate sculptural water fountains around you, as you soak in one of South Korea’s oldest and finest bathhouses. This is what it’s like at Hur Shim Chung Spa, which uses magnesium-tinged water to enhance skin hydration and relieve muscle inflammation.

Inside horse-racing stadium Let’s Run Park is a permanent light installation, Illumia, where many couples have gotten engaged. With massive light structures and sparkling rainbow-coloured fields, it’s a visual treat for the eyes.

Built in the late 16th century by Japanese Samurai lords, these abandoned fortresses were where many battles between the Koreans, Japanese and Chinese took place. Now, the 400-year-old castle ruins, overrun with foliage, are part of the Jaseongdae Park.

Kick back at the beach

Haeundae beach and Gwangalli beach are both attractive sunbathing locations in their own right. While the former offers an idyllic stroll along its 2km stretch of sand, the latter boasts a laidback selection of beachside bars and hipster cafes.

Jagalchi Fish Market, South Korea’s biggest seafood market, sells more than just the freshest catches of the day. Visitors can mingle with the stall aunties and get free tastings of smoked salmon and snow crabs too.

Busan has its own variation of naengmyeon called milmyeon, a chilled wheat noodle soup served in a metal bowl with chogochujang (a spicy dipping sauce), sliced pork, strips of vegetables and half a hard-boiled egg. It’s the kind of meal you’d eat on a sunny day at Milmyeon Jeonmunjeom, a cold noodle restaurant not far from Haeundae beach.

Sulbing, a dessert chain with an abundance of outlets in Busan, is where the Bingsu craze started. Instead of shaved ice, however, it serves shaved frozen milk with soybean powder, sliced almonds and condensed milk—a simple combination of ingredients that produces an indulgent, sugary treat.

Oryukdo Island (which translates to mean five-six islands) consists of a collection of smaller islets, some of which disappear at high tide. It’s one of two locations in Busan that’s deemed a National Cultural Heritage Scenic Site. To get a better view, head to the Oryukdo Skywalk and stand on the glass floors (go on, we dare you).

Partake in a temple stay

Skip hostels, hotels and Airbnb apartments for a temple stay at Beomeosa, a sanctuary situated on the eastern side of Geumjeongsan Mountain. Instead of your usual routine, spend a day living like a monk, participating in tea ceremonies and meditations.

One of the oldest craft beer bars in the city, Galmegi Brewing Company is a popular joint to knock back a few. Gorilla Brewing, a venue that holds live music performances on the weekends and free yoga sessions, features 12 house brew taps. Finally, Slice of Life Taphouse is a New York-style pizzeria with 15 beer taps and an impressive range of bottles.

Cat cafes and doggy diners are so passé. How about dining with an exotic mammal like the raccoon? Busan’s Racoona Matata is the place where you’ll discover just how cute and cuddly these furry masked prowlers are.

This city is known for its ssiat hotteok, a street food dessert that adapts the regular hotteok (a chewy kind of pancake made from sweet rice flour) and fills it with sunflower seeds, pumpkin seeds and pine nuts. Don’t mistake it for a healthy treat though. The pancake is also stuffed with cinnamon and brown sugar for that addictive syrupy flavour.

This natural location may boast majestic cliffs overlooking the cobalt sea, a “Suicide Rock” from which many have jumped to their deaths, more than 200 species of flora and fauna, and intriguing man-made sculptures, but the ultimate highlight remains the ancient dinosaur footprint that’s hidden in this park.

Used goods and other gems

A crowd favourite flea market with a twist, Earthling Market focuses on selling handicrafts and pre-loved items, while promoting various conservation methods to protect the planet. Thrift shopping fanatics will be treated to a flotilla of second-hand books, records and jewellery.

At Zero Latency VR, you can rally up a group of friends and immerse yourselves in a virtual world that takes video gaming to the next level. You could be in this free-roam facility for an hour and feel like you’ve hiked miles up a mountain.

This is a library that specialises in mystery literature, a unique space for readers to solve puzzles and live vicariously through fictional detectives. Opened in Dalmaji Hill by a renowned crime novelist, it doubles as a cafe, discussion space and home for a Shiba Inu as well.

Not many travellers know this, but there’s a Harry Potter-themed cafe in Busan, a quaint destination called Po Tid. The enchanting store is embellished with a wall of wand boxes, suspended broomsticks and a cosy fireplace, where you can snack on cookies and ice cream.

Perched by the sea, the Haedong Yonggungsa is one the most scenic temples in South Korea. The sight and sound of lapping waves add to the meditative atmosphere of the Buddhist place of worship, formerly known as the Bomun Temple, which was constructed in 1376 in the Goryeo Dynasty.

Situated on the roof of Shinsegae Centum City is Zooraji, an immersive playspace designed by Seattle-based studio Olson Kundig. Inspired by Greek fable The Town Mouse and the Country Mouse by Aesop, it features giant animal sculptures made from recycled materials, bamboo, car parts and even a canoe.

[Read More: Bangkok: The Ultimate A to Z Guide]