Kathmandu: A Land of Religious Mystique 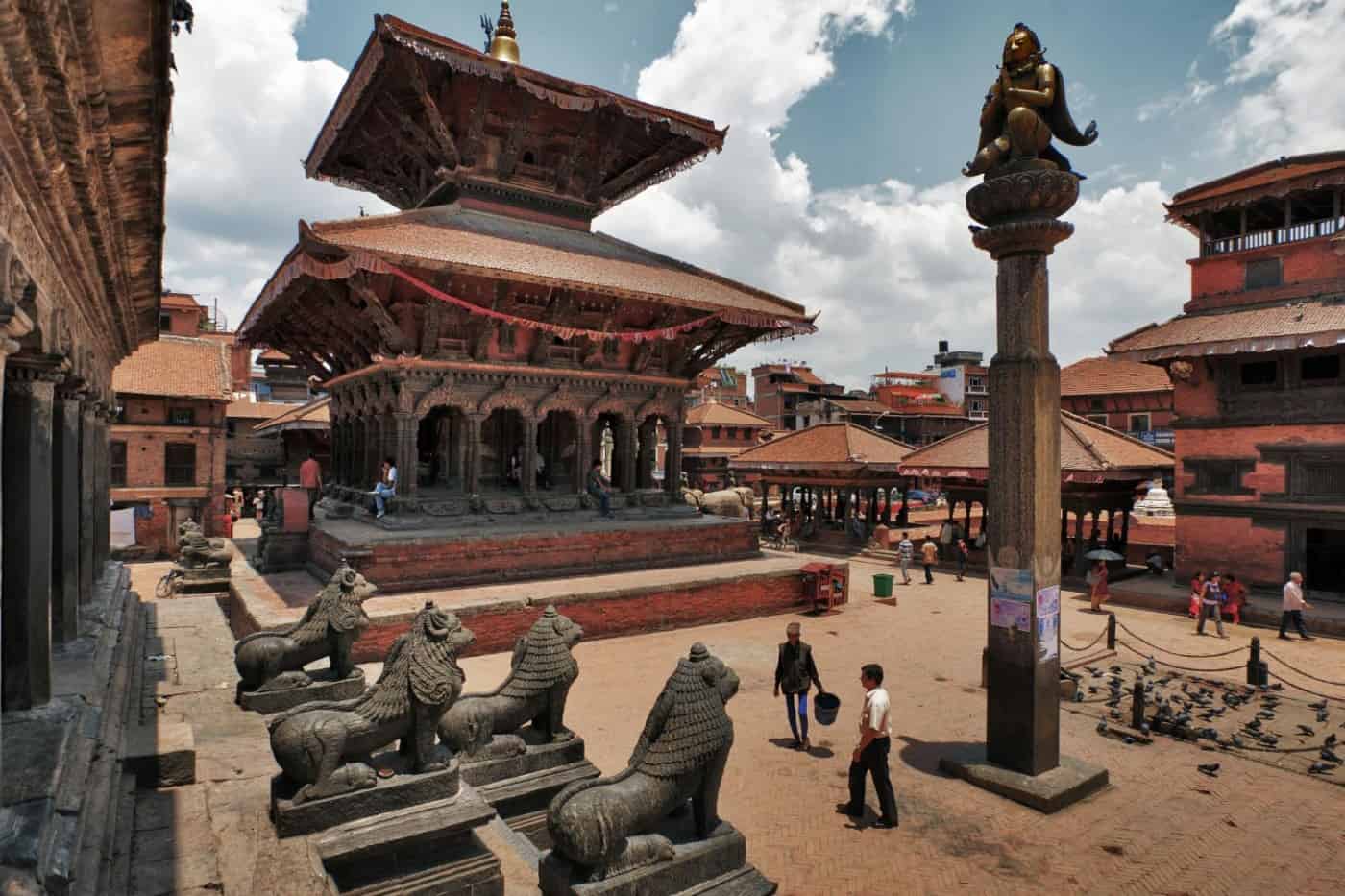 Located in the central Himalayas, Nepal is a land filled with religious mystique and fascinating history. From her many dynasties and kingdoms throughout time to Tibetan refugee settlers who have integrated their religion into the region, there’re many legends and stories surrounding this kingdom. A visit to Kathmandu (the capital city) is an experience of a lifetime with busy dusty streets filled with old and rickety vehicles juxtaposed against the calm quiet temples and stupas that are a majestic sight to behold. For those looking for a spirtual awakening, here are some places to visit.

This UNESCO World Heritage Site is located in front of Kathmandu’s Royal Palace and houses numerous ancient temples dating as far back as the 12th century and is divided between two compounds.

In the outer complex, you can find Buddhist and Hindu monasteries and temples such as Taleju Temple, the first three-tiered temple of the land and the most famous one there, Shiv-Parvati Temple, dedicated to the deities Shiva and Parvati. These structures are mainly pagoda styled with finely detailed frescoes and carvings depicting the gods.

The inner complex comprises the palace and her courtyards where many royal ceremonies used to take place. Today, visitors come to get a glimpse of how royalty lived back then by discovering the palace grounds in all her former glory and visit the magnificent botanical garden, also known as Bhandarkal. This is a good stop to admire a wide range of fauna as well as the Sleeping Vishnu statue which sits in the centre.

Boudanath Stupa is located in the town of Boudha on the eastern outskirts of Kathmandu and was built somewhere in the 14th century. There are various legends told on why the stupa was constructed but it is today a core location for pilgrimages and meditation as well as a UNESCO World Heritage Site.

The stupa is surrounded at the bottom by an irregular 16-sided wall attached with prayer wheels featuring carvings of the mantra of Avalokiteshvara (Om Mane Padme Hum). The practice here is to walk around the wall and spin these wheels in a clockwise direction to attain good merits and luck for one’s endeavours.

Ascend to the stupa’s base by a flight of steps and admire views of the surrounding scenery at this level from every angle while making your round. From here, it is clear to see the square tower atop the stupa bearing the omnipresent Buddha eyes on all four sides. Encompassing the stupa are a blend of smaller monasteries and restaurants, shops and also street vendors.

Sitting on a hill overlooking the city, this particular stupa is also known as “Monkey Temple” due to the wild monkeys that roam freely around the area. Climbing up the exceedingly steep stone steps to get to the stupa’s shrine is not for the faint of heart. Thankfully, there is an alternate route by car that leads you almost to the top. The remainder of the journey has to be made by foot but is less taxing.

Once up there, be sure to visit their most noted monuments such as the gold plated Vajra ‘thunderbolt’ set on the stupa’s east side and the Buddha statue on the west side. Also within the vicinity is The Dewa Dharma Monastery which houses a famous bronze icon of Buddha and traditional paintings for those who love all things historic.

This Hindu temple was built in the 5th century and is now part of the 8 UNESCO Cultural Heritage Sites of the Kathmandu Valley. The site itself is thought to have existed since the beginning of the millennium and is dedicated to Lord Shiva.

Stretching both sides of the Bagmati River, the vast compound is an extensive collective of temples and ashrams with the main pagoda style temple bearing a gilded roof with covered in silver and intricate wood carvings. There are a total of 492 temples and 27 shrines to explore here.

People of all walks of life often flock here for an unforgettable cultural and spiritual experience. The West gate opens for visitors at 4 am every morning followed by daily rituals that include prayers and religious ceremonies which you can either watch or participate, until closing time at 7 pm.

The formal royal palace in the city centre was the long-serving primary residence for the country’s monarchs. It was converted into a museum in 2007 and amongst its displays are the grand and gaudy throne, banquet halls and royal bedrooms. It also has a living room filled with stuffed tigers and rhino heads.

The National Museum is close to a century old and spans three buildings. The main section features the natural historic section. Nature lovers will enjoy this for their collection of many different animal, insect and plant species. The cultural section is also within this building.

The Juddha Jayata Kala Shala building houses artefacts such as weapons, art, murals, coins and sculptures that depict how these elements shape and represent history. For those who are interested in Buddhist art, there is an art gallery in the third building.

Be encapsulated in a world of mysticism that seems to stand frozen in time when you visit Kathmandu.

Travel
How to Travel With More Compassion
Culture
Top 5 Street Artists To Follow Right Now
Insights
Market Thoughts: Nothing but Inflation on Our Minds
Property
This Five-Bedroom Residence at Chelsea Barracks Is the Ultimate Urban Oasis
Insights
Just Try Not To Lose Money To The Black Swan