Waking Up in 33 Cities 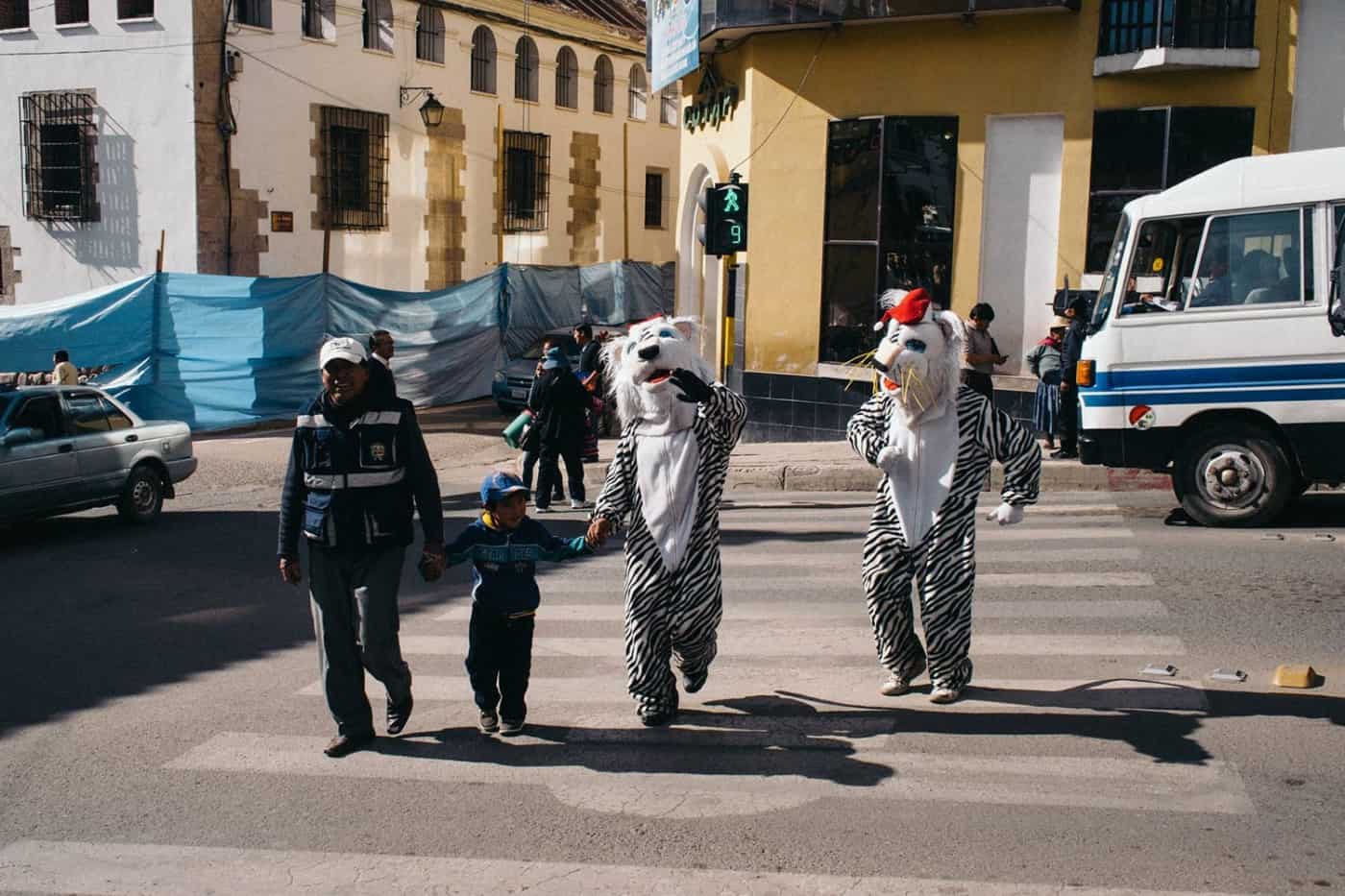 Not many travellers can boast of having visited 33 cities in 14 months, but Juliana Tan can—and she did it alone. The result? A greater perspective of the world, and a travel zine. Titled Waking Up in Strange Places, the zine captures her various adventures from strange hotel rooms to breathtaking landscapes—all through her camera lens.

The fruits of her labour stemmed from a brave decision she made two years ago. Discontented with her progress after graduating with a Communications degree from Nanyang Technological University, Juliana packed her bags for New York to learn from the best and hone her photography skills. While in New York, she took the opportunity to travel to South America and the Caribbean with her camera as her only companion. The end result was a better understanding of her craft and life lessons that can’t be taught but only experienced.

Q: Why do you travel?

A: I travel because it is an educational experience. My mum always questions me on why I like to travel, but I enjoy it because I get to learn about different people, cultures and traditions. Every place teaches me something new.

Q: Can you tell me about the very first time you travelled alone?

A: In 2010, I went to Surabaya to volunteer at an orphanage. Although I was alone, I was surrounded by all the children there. Since then, I have been to other parts of South East Asia like Sabah and Cambodia.

Q: Do you ever feel lonely?

A: I like being alone. I feel that when I travel alone, my senses are heightened because I have to be careful of my surroundings. But on top of that, the food I eat, the sights I see, and the sounds I hear, become more intense because there aren’t any distractions. It is also a lot easier to make friends with other solo travellers when you are alone. The downside (to travelling alone) is that if I see something beautiful, there is no one to share that moment with. Of course, there are perks to travelling with friends, and I have done a lot more of that after coming back from America. However, when I’m with my friends, I am always talking to them or paying attention to what they have to say instead of the things around me.

A: When I reach a new city, the first thing I do is to explore a bit and gauge how safe I feel in that place. I find it more convenient to stay in hostels as a solo traveller—not because it is cheap, but because it is easier to meet people, obtain information and get recommendations.

Q: What attracted you to New York?

A: I felt that there was a disparity between the standard of my work and the quality produced by American magazines and newspapers, so I decided to go there to learn and improve. I sent out hundreds of emails to photographers in New York, showing them my portfolio. There were two who seemed keen and I flew to New York to give it a shot.

Q: What inspired you to travel to South America and the Caribbean?

A: Since I was in New York for my internship, I decided to visit Cuba and Haiti because two of my favourite photographers, Alex Webb and Maggie Steber had been there previously and their photos were very intriguing. I wanted to see what they saw and feel what they had experienced.

Q: Which country left the deepest impression on you?

A: Haiti is a complicated country. They were colonised by the Spanish, then the French and many natives were killed during those periods, but they managed to overthrow the French and become a nation. The people who live in Haiti now, are mostly the descendants of the slaves from West Africa, and because of their history, they are wary of foreigners. People don’t usually visit Haiti unless they are a journalist or with an NGO.

My Airbnb host in Haiti was supposed to pick me up on my first day there, but he didn’t show up. So I took a cab to downtown and the streets were decorated with election posters. It was then that I realised the Haitian elections were happening that weekend. Naturally, I was very excited and wanted to be in the midst of it all to photograph the event.

To familiarise myself with the place, I walked around the city and visited the National Palace. There was rubble everywhere since it had not been rebuilt after the Haiti earthquake in 2010, as well as many stray dogs and drunken men, which made me feel really unsafe. Furthermore, I couldn’t understand Haitian Creole, and they couldn’t speak English or Spanish. Eventually, I gave up and went to the supermarket to find food.

At the supermarket, I bumped into an Asian man. He was worried about my safety and suggested that I join him and his colleagues for a barbeque by the beach later that weekend. I thought it was dodgy, so I declined his offer, but soon realised he was probably the only person in Haiti who I could communicate with. As it turned out, his boss is a magnanimous Taiwanese who ended up taking care of me while I was there. He even offered his chauffeur and we would lunch together occasionally. Concerned for my safety, he warned me not to venture out during the election weekend, as it was very dangerous for foreigners.

The following weekend, I hired a local tour guide who brought me to the Day of the Dead Festival. Traditionally, people remember their dead family and friends on this day, but it felt more like an excuse for the locals to party and drink all day. There were rituals at the cemetery that involved human skulls, which was a little creepy; coffins were rummaged through in search of worthy possessions and there was looting everywhere. It was a little hard for me to process how the greed for money supersedes the respect for the dead. Later, I went to the night festival and witnessed some people were in a trance which weirded me out.

Q: Do you think travelling is a good form of education?

A: To a certain extent. But I am a huge advocate of formal education as I think the rigour is important. I believe that by undergoing formal education, I’m able to better understand different cultures and their origins. There is a saying that your perspective will shape your experience. Likewise, your experience will also shape your perspective. Usually, when I visit a country, I try to travel with a blank slate, so that I can absorb each experience without any preconceived notions.

Although I am Indonesian, I grew up mostly in Singapore, so the idea that democracy is the best way to run a country was something ingrained in me… but going to Cuba changed all of that. Cuba is a socialist country, and I witnessed people on the streets with the food booklets, collecting rice and milk. Even though everyone seemed like they had just enough to get by, there were no homeless people on the streets. Moreover, I also met many European tourists in Cuba, and they would tell me about their tax and welfare system. For example, if you lost your job, the state can provide up to 18 months of salary. Or if you are lonely, they can give you a dog. I think that is a really interesting way of living because it goes against the meritocratic system I am used to.

Q: How did you sustain yourself financially while travelling?

A: I saved and budgeted for each trip. Travelling in that part of the world is not that expensive if you choose to stay in hostels. I rely a lot on recommendations from other travellers to seek out the best deals. Once in Mexico, a lady suggested staying in a place that was cheaper and nearer to nature (USD 5 per night). I was sold immediately and we took a taxi from the bus station as it was on the outskirts. I followed her along until we reached a hammock in the middle of the jungle. I was shocked by the conditions. It was out in the open, amidst bloodthirsty mosquitoes, and the nearest toilet was a shared one a few minutes away. Eventually, I turned her down and hitchhiked back. That was also my very first time hitchhiking!

Q: What do you usually carry with you?

A: A backpack with my cameras. Bigger cameras tend to attract a lot of attention and it intimidates people, so I didn’t use them a lot. I did a lot of street photography and had to be discreet so a smaller camera was more ideal, especially in Haiti. Every time I took my camera out, someone would shout at me because they didn’t like being photographed.

Q: Other than Haiti, was there anywhere else you felt you were in danger?

A: La Paz, Bolivia. I met many travellers who warned me about robbers and pickpockets. Although I didn’t lose anything there, I did lose my wallet in Cuba. No matter what, you have to be on high alert when you are travelling, regardless of where you are going. I think the worst and most dangerous thing about travelling alone is falling sick. I got food poisoning three times and had to learn how to take care of myself before continuing on my journey.

Q: Finally, what’s on your radar next?

A: I will most likely be travelling to China in September. I would also love to visit the Middle East and check out countries like Iran, Afghanistan and Kazakhstan.