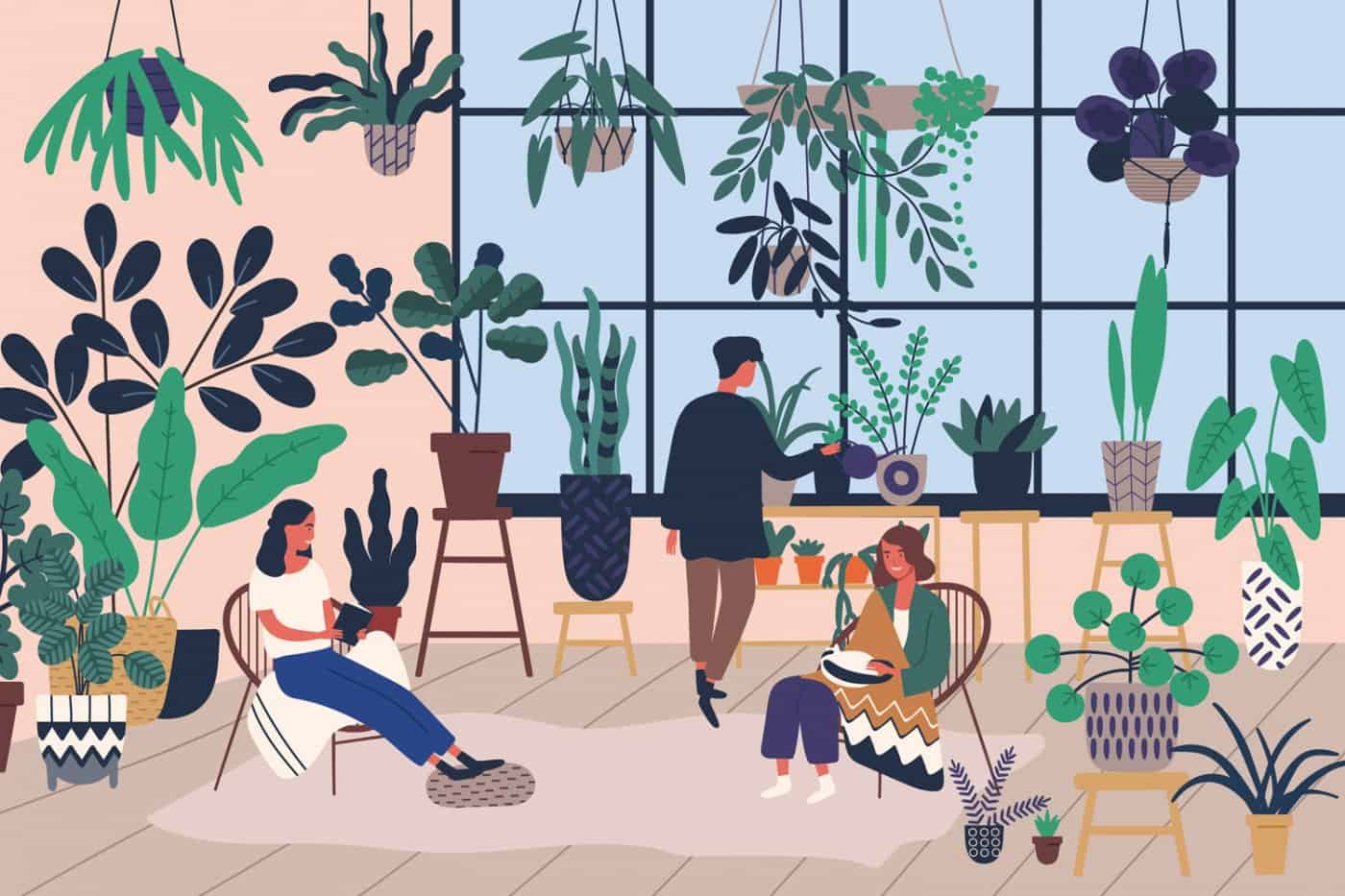 Walking along Hackney Road in East London, I quickly realised that the aesthetics of the area combined with my obvious lack of sense of direction meant that more time would be spent meandering around. Peering into yet another Victorian-conversion storefront I thought, is this it? No, it was a hairdresser’s window with a misleading display of vintage furniture and plants. Another storefront I passed turned out to be a café covered wall-to-wall with everything from foliage to climbers. It was another ten minutes before I saw a large tropical plant sunbathing outside the façade of Conservatory Archives. I had, predictably and in millennial fashion, found one of Time Out’s “7 best plant shops in London”.

Growing up, the only experience I had with plants involved constant and dire warnings about “killer litter” in the form of potted plants, and so stepping into Conservatory Archives felt like a real revelation. Immediately to my left was a shoulder-height shelf displaying a variety of tiny indoor plants. Over time, I came to learn that while Instagram photos were taken with impressive foliage and cacti in the next room, this shelf is where people, wanting plants but ambivalent about keeping them alive, tentatively picked up a palm-sized cactus or two. Although it was rather uncharacteristic of me, I bought three medium-sized plants on that Sunday, and another three the week after.

As I shared my progress pruning and repotting and DIY-ing insecticides from dishwashing soap, I noticed that my Instagram feed increasingly featured friends doing the same. My personal foray into indoor gardening began because I had woken up one day after three years in my tiny and expensive East London apartment, and felt compelled to walk till my feet touched something that wasn’t artificial. Instead of doing that, I figured what I really needed in my life were plants. As it turns out, my personal epiphany was in fact part of a larger trend with indoor plants: The Royal Horticultural Society reported a 10-15% year-on-year increase across the industry in houseplants since 2013. The internet is, of course, awash with articles diagnosing the trend: Urbanisation! Population density! Instagram! And I believe them—the reality is probably a combination and confluence of all of these things. But what is more intriguing was how people started converging on getting indoor plants as the answer. How did we manage to tacitly organise ourselves around this?

Karl Ove Knausgård, writing in his part-biography part-commentary, So Much Longing in So Little Space: The Art of Edvard Munch, ponders the role of biography in a work of art. He gives the example that while a well-informed reader in the Middle Ages would have been able to distinguish between different book illustrators of the time, for us, the style expresses one thing and one thing only: the medieval. After some time has passed since the creation of a work (or any work), the more apparent it becomes that the particular person who made it plays less of a role than the culture in which it found expression. In a similar way, my and others’ sudden interest in gardening as well as the culture commentary debating what it all means, seems nuanced and important in the moment. But in introspect, only demonstrates the spirit of the time. The way then, Knausgård argues, to make work that goes beyond is to question what we’ve taken for granted in our environment, to express something more than simply the social background that we’ve inherited.

I was mulling over this when I encountered another instance of inadvertently participating and expressing a sentiment of my time. I have a favourite brick-and-mortar bookstore where I go every other weekend to stock up on books that I’ll probably never have time to finish reading. There I saw The Magic of Tidying Up right next to The Joy of Leaving Your Shit All Over the Place. I used to laugh at these things, but this time I felt a surge of rage. I told myself I was being ridiculous, pushed the rage away, and instead eavesdropped for a few minutes on a couple arguing over the merits of Noam Chomsky. I went back to the front to catch up with my friend and before I could say anything, he said to me, “I’m so f***ing angry. Look at these goddamn books.” He picked up a bestseller and read the title to me in a mocking tone and questioned, “What’s with all these hyperbole and reductionism? Do people not care at all?” Not only did I not have satisfactory answers to my friend’s questions, I became more puzzled by how my unspoken, personal response had again corresponded to those close to me and to the larger social trend.

We are deeply entrenched in our surroundings, which some may call “culture” or “social reality”: people, objects, even ways of seeing and being—that it is hard to see its profound influence and impact on us. Returning to Knausgård may provide us with one possible answer: we need to have a new language—a new way of talking about our experiences—so that we can talk about things that are ingrained or taken for granted. This is not radically new, we’ve known for a long time that language shapes and often constrains the way we think, and we’ve always heard artists and other creatives talk about “telling the truth” in their work. Perhaps the truth may then lie in the parts of us that remain unchanged after we’ve peeled away the inherited social norms, so let’s see how long my newfound love for plants will last.

Insights
Suckerpunch and The e-Sports Market for Singapore
Travel
Off The Beaten Track: Kanchanaburi
Travel
This Private Island in the Maldives Can Be Yours for US$180K a Night
Property
Siri House: A New Lifestyle Destination to Inspire, Live, Dine, and Play in Dempsey Hill
Dining
Entier Takes Nose-To-Tail Dining To New Heights