How Impossible Foods CEO Patrick Brown Plans to Save the World 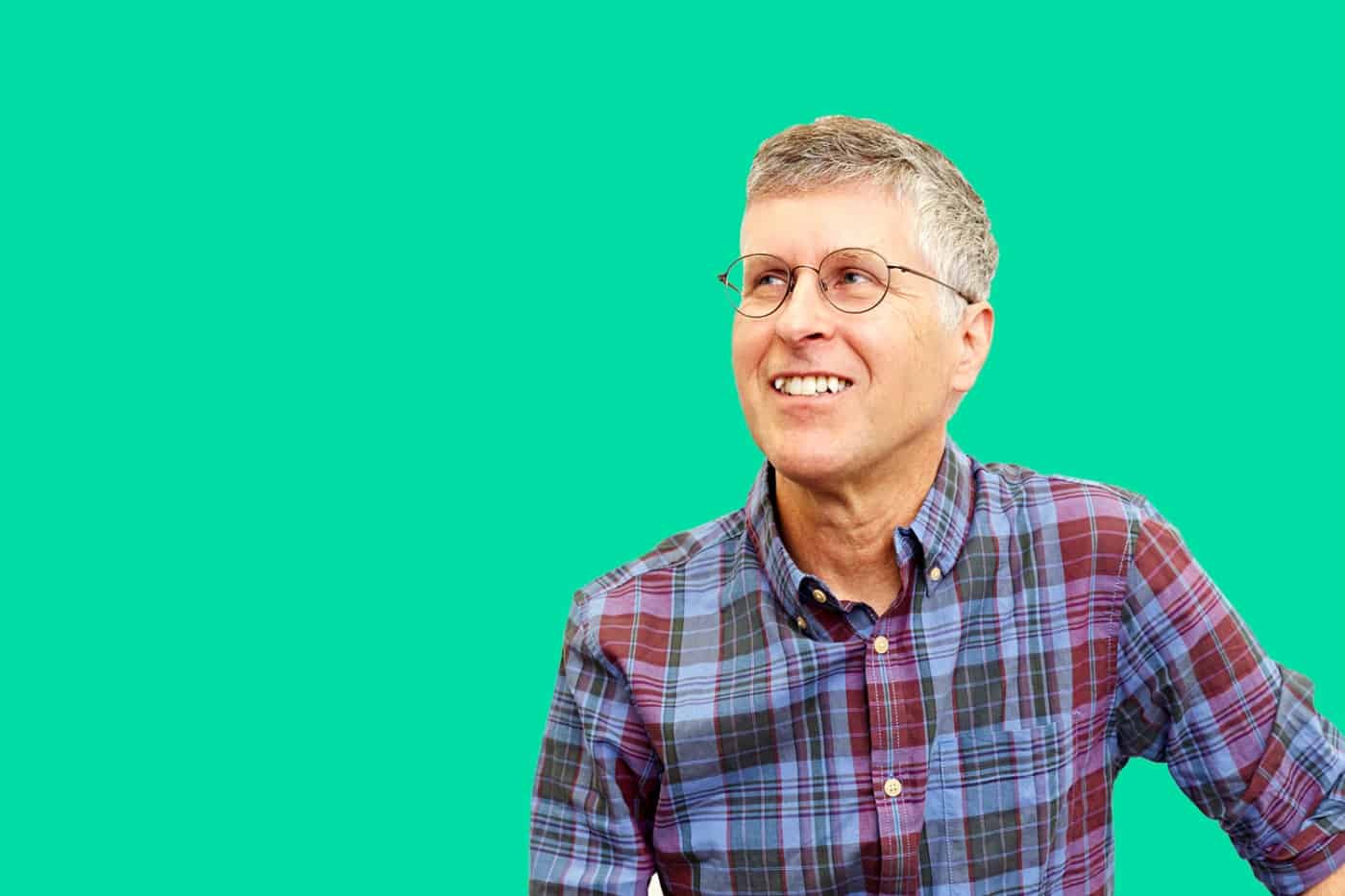 What makes meat so delicious? This was the billion-dollar question that Patrick Brown, founder and CEO of Impossible Foods had to reckon with, in his indomitable quest to offer meat-eaters “a more planet-friendly version.” He (and some others) seem to have nailed the answer by creating meat facsimiles, which has caused a massive shake-up in the food industry.

The 66-year-old geneticist, who started the company in 2011, hopes to address the apocalyptic consequences of climate change with a simple solution: plant-based meat alternatives. Having stopped eating animal products himself, the long-time vegan not only walks the talk, but also believes that his ingenious creation is a form of salvation for humanity. Since Impossible Foods’ prodigious debut of the Impossible Burger in 2016, they have taken the world by storm by looking and tasting uncannily like the real deal. Even with blind taste tests, many aren’t able to tell the difference. The secret behind their formula is a molecule called heme, which converts nutrients into the same molecules that lend beef its meaty and savoury flavour.

Walk into any restaurant and you’ll be hard-pressed not to find Impossible meat on the menu. Globally, the company has managed to make plant-based substitutes mainstream, recently launching Impossible pork and sausage to expand their offerings. With veganism on the rise and fast food giants serving up more plant-based options for the health-conscious, Impossible Foods hopes to dominate the market after raising another US$500 million in their latest round. With an empire valued at more than US$2 billion, Brown’s once-quixotic vision is opening up a brave new world of possibilities that will impact generations to come.

High Net Worth: What’s your philosophy on food?

Patrick Brown: Since prehistoric times, humans have exploited animals as a rudimentary technology to transform cheap, abundant plant biomass into highly valued, nutrient-dense foods: meat, fish and dairy. These foods continue to provide an important source of nutrition and one of the greatest sources of pleasure in the daily lives of billions of people around the world.

Raising animals for food makes up the vast majority of the land footprint of humanity. All the buildings, roads and paved surfaces in the world occupy less than one per cent of Earth’s land surface, while more than 45 per cent of the land surface of Earth is currently in use as land for grazing or growing feed crops for livestock. The global demand for meat, fish and dairy foods is a primary driver of the ongoing meltdown in diverse wildlife populations and ecosystems on land and in oceans, rivers and lakes. Unless we act quickly to reduce or eliminate the use of animals as technology in the food system, we are racing toward ecological disaster.

How would you convince a loyal meat-eater to convert?

We are not convincing anyone to change their diets. Instead, we are simply offering a more planet-friendly version of a product they already love. From the early days of Impossible Foods, we knew that we weren’t going to change consumers’ buying behaviour without providing a product that unequivocally delivers more pleasure and value to consumers. The concept of plant-based foods has been around for many years, but so far, none of these products has taken a serious share of the market for meat because they fall short in delivering on the sensory pleasures that meat lovers crave. We want consumers to drive the change, and that means providing delicious alternatives, using science and innovation, to put a product out on the free market that consumers prefer over the existing product: meat from animals.

We have worked closely with some of the world’s top chefs to make our product better than ever before. With its meaty, charred flavour, and a chewier ‘bite,’ anything ground beef can do, Impossible can do too. And it also satisfies the craveable taste of animal meat. In fact, according to a recent study, around 95 per cent of consumers that have purchased the Impossible Burger are self-identified meat-eaters.

Do you see Beyond Meat as a potential threat? And separately, what have you done to protect your business from competitive encroachment?

No, we do not. The only competition we care about is meat from animals, because it’s led us to the brink of environmental catastrophe. If any other company were truly making a dent in the global consumption of animal meat, Impossible Foods wouldn’t need to exist.

What differentiates us from other companies is our technology platform and our world-class archive of knowledge of how meat works at the molecular level. The Impossible Burger is the product of nearly a decade of basic science and hard-core R&D to understand the entire experience and science behind meat and how it tastes, cooks, sizzles and smells. Our scientists have figured out the exact mechanisms by which meat flavour is generated from simple nutrients during cooking and discovered how to use these simple nutrients to recreate meat flavour just as it happens in meat from animals. This R&D work is protected by more than 200 patents and patent applications pending worldwide.

What do you have to say to the naysayers who don’t believe in your lab-grown meat?

We are singularly focused on achieving our goal of making the global food system sustainable.

Is there a difference between Version 1.0 and 2.0?

We originally launched the Impossible Burger (1.0) in 2016, but we didn’t stop there. We’re always learning how to make it even better. In 2019, we announced recipe 2.0. The newer recipe is tastier, juicier and more nutritious—featuring 30 per cent less sodium and 40 per cent less saturated fat than our original recipe and just as much protein as 80/20 ground beef from cows. We also replaced wheat protein with soy protein, which is higher in “protein quality”.

From a consumer perspective, this means that when a consumer chooses an Impossible Burger over a conventional beef burger, they save the greenhouse gases of the average American’s drive to work, 73 square feet of land for nature and 170 water bottles worth of fresh water.

At CES 2020, you launched Impossible Pork. What’s next?

Yes, at CES 2020, we announced Impossible Pork and Impossible Sausage. Pigs are the most widely eaten animal in the world, accounting for about 38 per cent of meat production worldwide, and come with a high environmental cost, on both a global and local scale. At this time, we are not announcing the go-to-market commercial launch plans for Impossible Pork yet.

Our mission from the beginning has been to replace all meat, fish and dairy products with plant-based versions. Our R&D based food tech platform enables us to understand and reverse-engineer many animal products from plants. The goal is to produce a full range of meats and dairy products for every region in the world. We don’t have any new products to announce at this time, but stay tuned.

You have said once that Impossible Foods will save the world. That’s a very bold statement and how do you intend to do that?

We want to replace animals as a food technology by 2035. It’s entirely feasible, or we wouldn’t have embarked on this mission. New products and technologies replace their predecessors by doing a better job of giving consumers what they want and need. The surest strategy for replacing the most destructive technology on Earth is to deliberately create foods that deliver greater pleasure and value to consumers. Before I even started Impossible Foods, I knew that our success would depend on creating foods that not only matched but categorically outperformed meat from animals in taste, nutrition and value.

People have commented that the nutritional content in Impossible Foods isn’t that healthy—it’s higher in saturated fat and sodium. Do you think this could be problematic in the long run?

We strive to make products that are at least as nutritious as the products we are trying to replace. Our Nutrition and Sustainability Teams, among others, are involved at every major decision point to ensure we are moving forward with the healthiest, most sustainable, and scalable prototype possible. Our plant-based meats typically deliver as much or more protein and iron as animal-derived meats, without the downsides associated with using animals as a food production technology. Impossible products have no animal hormones, antibiotics, slaughterhouse contaminants, fecal matter or other toxins that can be found in ground beef from cows.

How do you keep up with the demand for meatless burgers?

After we announced our new recipe in January 2019, we saw the demand for the burger skyrocket. We simply did not expect the demand for the product to be as high as it was and it outperformed even our most optimistic predictions. As a result, in the summer of 2019, we faced a period where the supply of our product was briefly outstripped by demand for the Impossible Burger 2.0, and we went through a temporary product shortage. Like most start-ups, we learnt a valuable lesson about the importance of scaling up our manufacturing and production as quickly as possible. Everyone at the company was faced with the tough realities of our rapid growth, and we had to work hard to resolve the shortage as quickly as possible. It will continue to be a challenge for us to keep up with the pace of growth.

In the past few months, what is the smallest change you have made in the company that has had the biggest positive result?

Our partnership with OSI gave us immediate access to additional manufacturing capacities. This increased pace of manufacturing allowed us to achieve new economies of scale and lower the price to our US foodservice customers by 15 per cent.

Finally, what possible food trends do you predict in the coming year, and why?

The entire animal food system is ripe for disruption, and we’re excited to see what comes next, both from Impossible and other similar companies. We are always innovating and improving on new and existing products. In the next decade, all of the food we get today from animals will be replaced by plant-based counterparts that outperform them in every way that matters to consumers  like  taste, nutrition and value.