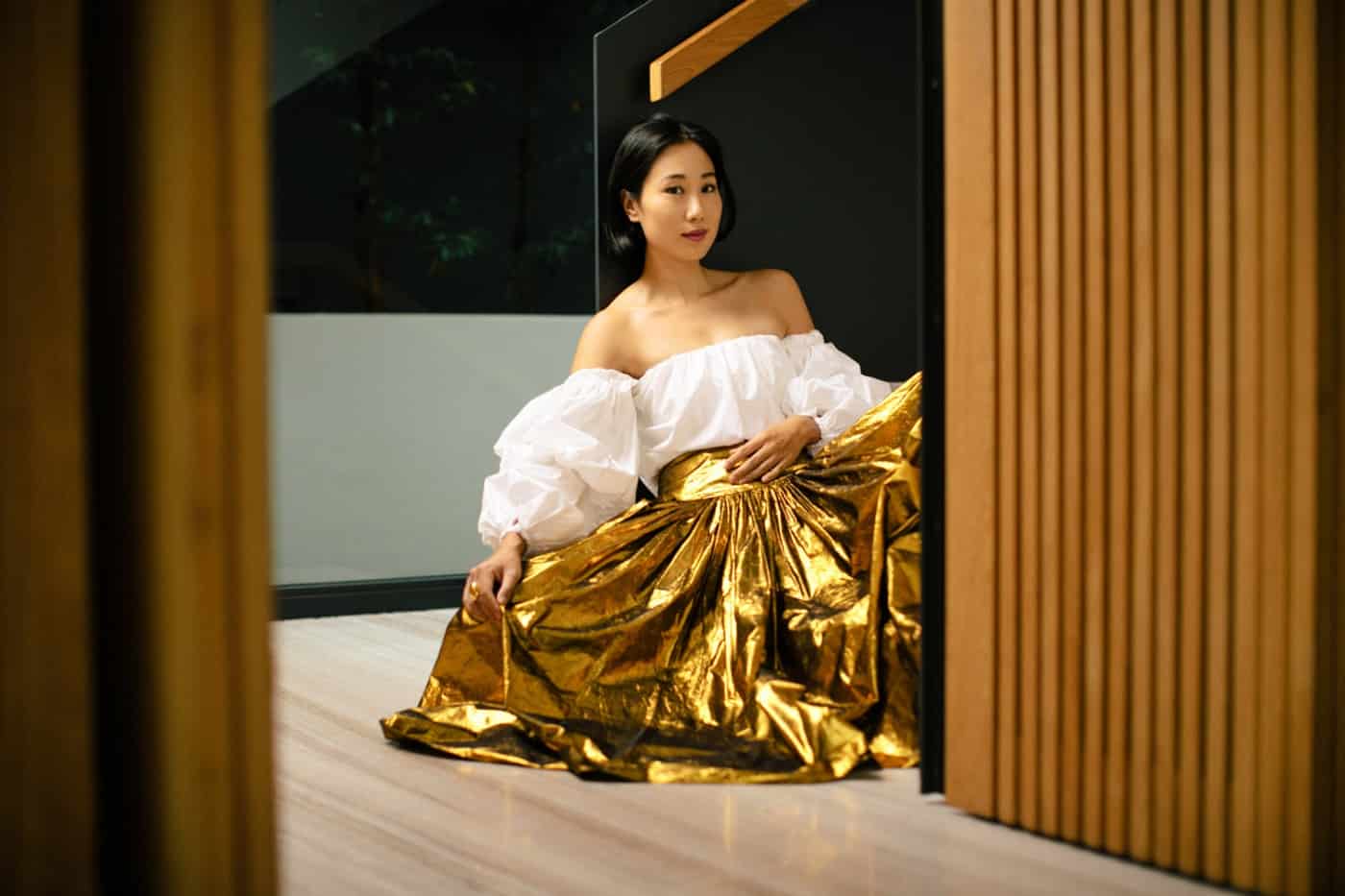 Jamie QianQian Wu isn’t that heavily maquillaged as I thought she would be. She has impeccable manners and like a hospitable steward, gestures me into her living room while asking for my beverage of choice. The space is modern yet inviting, with neutral hues, wood accents and lush landscaping that evoke an oasis of tranquillity. She spies my violin and nods with approval. “I never enjoyed playing music; my mother forced me to and I hated it,” she chuckles.

It is easy for one to pigeonhole the 36-year-old as yet another peacockish, vacuous, fashion influencer with a globe-trotting lifestyle. But JamieQQ is disarmingly earnest and more profound than the affectation of style that she puts on public display. Having 61.8K followers is all just a social experiment to her. Still, the superficiality of the fashion industry is treacherous to navigate and JamieQQ is torn that her role involves promoting a culture of excessive consumption, without leaving much room to showcase more “authentic” parts of herself.

High Net Worth: What is the difference between your social media image and who you really are?

Jamie QianQian Wu: Dabbling in social media has made me more aware of consumerism. My Instagram page does not reflect my inner conflict towards fashion and consumerism. It reflects nothing more than cool and stylish images. I can’t be a conflicted philosopher and an anti-consumerist, for there are too many mixed messages. You only see one side of me on social media and it’s very flat. I’m still struggling to come up with something deeper in terms of content.

What is something no one knows about you?

I  grew up listening to my grandmother’s stories of how she starved and food was everything to her. In the mid-80s in China, my parents were paid 36 RMB a day all the way until the 90s. Then suddenly China became the land of opportunities and the goal was to become rich. I was born in a conflicted environment. Shanghai was constantly building new infrastructure and there was always noise in the background. It was chaotic and I wish I could have grown up in a simpler environment.

What did you aspire to be as a child?

I liked hip-hop music; Missy Elliot, TLC and was interested in street fashion. But China grew rapidly, and I did not even have time to make up my mind about what I wanted to do. It was all about my parents’ very Asian expectations: to be a doctor, lawyer, or a translator for President Jiang. I spent so much time in school that I didn’t have time to think about my dreams. Fashion and hip-hop were my only forms of escapism. Then, Jack Ma emerged and it became a national ambition to have your own business. Without having a concrete passion or dream, I was told to just study hard, go to college and own my own business.

What advice would you give your younger self?

China is one of the most misrepresented countries, and I would have told myself to become a diplomat. I have this personal mission to promote China. I should have been honest with myself and my true ambitions.

Where do you see yourself five years from now? It’s never too late to follow your True North.

I hope to promote my country and culture and be a spokesperson for China. I also wish to engage in more sustainable fashion practices. There has been too much fast fashion and it’s not real. I need to evolve my identity; my public opinion has to have deeper messages. It can’t always be about the next outfit to buy.

What is the biggest misconception that people have about you?

They think I’m this fashion-obsessed person and that I wear too many clothes. But I am really in sweatpants and tank tops all day.

Growing up, JamieQQ was the classic, dutiful Asian daughter—the only child who was taught to conform to a societal archetype and was a straight-A student at Shanghai High School all the way till she was 16. Apart from being selected as the speaker of every Monday’s flag-raising ceremony in front of the whole school, she was a math champion, placed top 10 in her school’s final examinations and came in second in a high school public speaking contest. However, all that pressure of needing to be a high achiever made her listless and unfulfilled. It did not help that her mother was extremely domineering and controlling, akin to the relationship that Lindo and Waverly Jong had in the novel Joy Luck Club. Whenever Lindo would push her daughter Waverly to achieve excellence, Waverly would abhor her mother’s controlling ways, which resulted in constant friction between them.

No wonder fashion magazines like Elle became a form of escapism for JamieQQ, a retreat from reality, a universe where she could fantasise and be the stylish protagonist of her own story (all decked out in Gucci and Dior). Gradually, that led to her broadening her horizons where she studied journalism at Communication University of China. Tired of life in China, she headed over to Hong Kong in 2006, where she worked for Star TV. After a year in Hong Kong, she returned to Shanghai and opened Hamilton House, her first business when she was only 23.

I understand that you used to be a restaurateur. What was your biggest takeaway from running Hamilton House?

Everything Anthony Bourdain wrote in Kitchen Confidential was true. It was an eye-opening experience and I met people from all walks of life. Unfortunately, it wasn’t a profitable business. And I wasn’t good at managing the P&L. Like all trendy restaurants, people move on to the next thing. It did enjoy a huge amount of success because it was one of a kind in Shanghai at that time. I rented an apartment on the top floor of the restaurant and I had these grand parties in my place all the time. I invited people from all over: fashion, media, architects and many high-flyers, which was the most efficient offline marketing. Hamilton House was the talk of the town based on word of mouth.

How does it feel to be known as “China’s IT Girl?”

I love this moniker so much and I joke about it. Boucheron gave me this title when I was at the Cannes 2018 Film Festival. I recall asking my friend what I should wear for the event and he linked me up with Boucheron. So I walked on the red carpet draped with all that finery and the photographers snapped away. Boucheron loved the pictures so much, and they featured me together with three other A-list Chinese actresses and actors, calling me “China’s IT Girl.”

Now that you are a mother, do you have any advice for mothers-to-be?

Keep an open mind and buy less stuff for your kids. To be honest, I have gained so much more than I have sacrificed. I have gained perspective and became more honest with myself. Although I respect my mother tremendously for the way she worked hard, I did not enjoy how she fell victim to peer pressure and forced those expectations on me. So I hope to do it differently with my son Archie.

How has motherhood changed you or your perspective on life?

I used to be cynical and suspicious about the idea of becoming a mother because I felt that it would disrupt my wonderful lifestyle. But having a kid has changed my mindset totally. I have become a more optimistic person. I am constantly projecting the best for my son and reminding myself to keep an open mind for him. Having a child has also made me reflect on my own upbringing: I developed a negative mindset due to my relationship with my mother. My childhood was unimaginative and I was constantly doubting myself. I want to bring my child up to think differently, to enjoy his childhood and be a creative person.

What are some important lessons you hope to teach Archie?

Boredom and simplicity can lead to creativity. Our life has become so curated and privileged. I want him to learn how to use his imagination because this modern abundance has stripped us of our innovativeness. I hope he can live a simpler life and keep an open mind.

Perhaps Edith Wharton’s anti-heroine Undine Spragg in The Custom of The Country, the 19th-century version of a modern-day fashion influencer, is JamieQQ’s literary foil. As someone devoid of feelings and who places a price on everyone, Undine is utterly ignorant and fatuous, is the epitome of superficial posturing and has only one objective, which is to be rich and adored. A hollow life of parading her beauty and acquiring the largest number of admirers possible.

JamieQQ, on the other hand, is not in the least bit obsessed or concerned with her social media following and is quite the philosopher. Her far-reaching ideas and theories about life elucidate many overlooked aspects such as emotions, inequality, culture and identity. Surprisingly for a public figure, she prefers to stay at home and be absorbed in books by her favourite Chinese authors like Nobel prize winner 莫言, 王朔  and 老舍. Watching JamieQQ coo affectionately at Archie makes me think of how life always comes full circle. The visions and aspirations she has for her child today (to make his mark), are similar to what her own mother desired for her, albeit expressed differently. As JamieQQ ends our conversation by telling me she has not yet “found her calling,” I think motherhood suits her.