Tracing An Evolving Singapore Landscape Through The Botanic Gardens

Text and Photography by Charmaine Poh 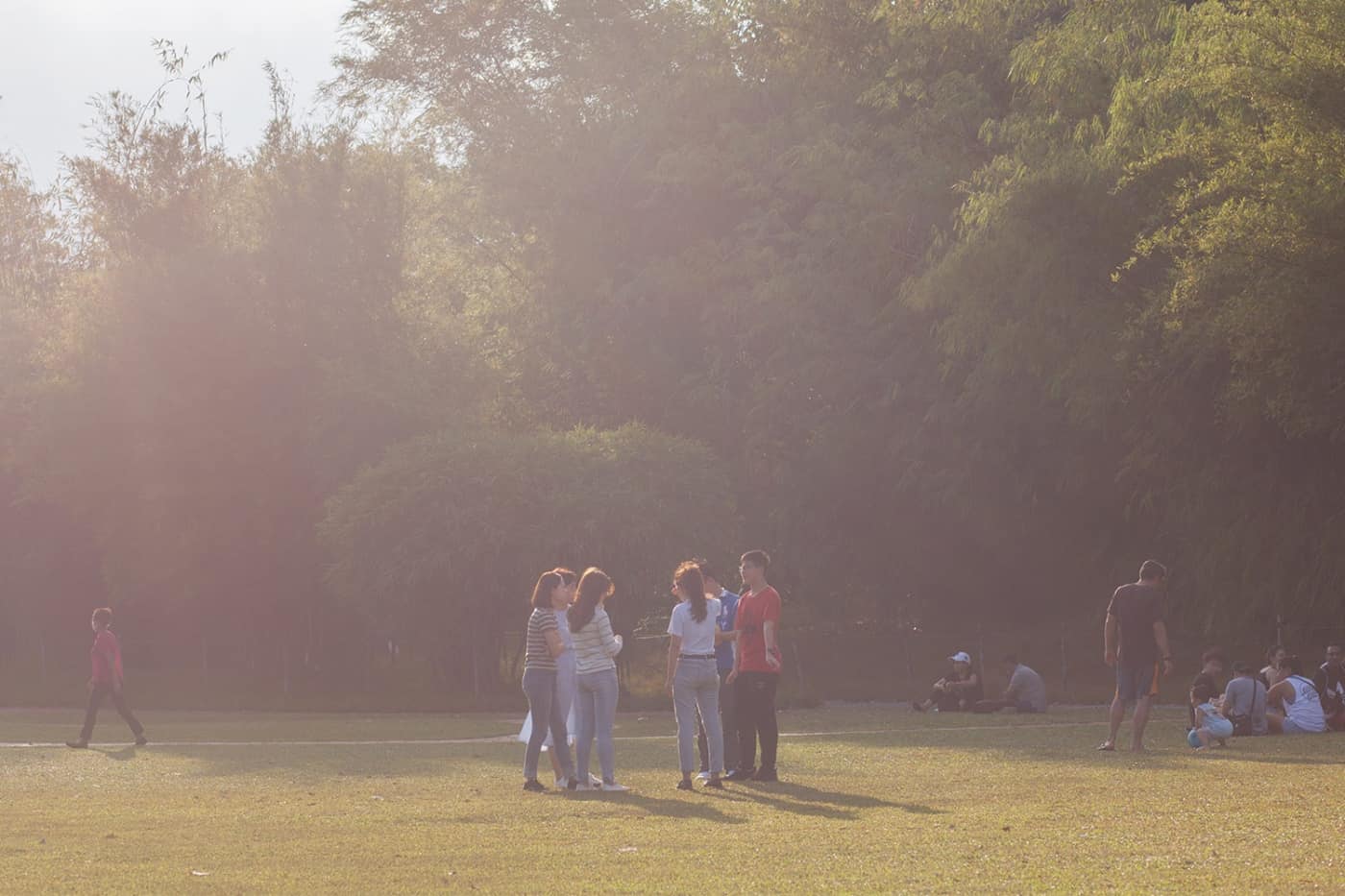 I took a wrong turn, and entered through the Bukit Timah gate, only to realise that I was on the other side of the sprawling green. The heat clung to my skin as I slowly made my way northward, tracing the steps that were once familiar to me as a child. I used to draw and shade tree trunks on pieces of paper, and run my fingers under a fountain stream, letting time stretch on. I learned about the shapes of leaves, and picked up saga seeds, one by one, to take home. The Singapore Botanic Gardens was a place of hazy, sepia-toned sunlight.

As I made my way to meet my friends, I felt like l had a fresh new pair of lenses, without my childhood blinders on. Chinese families strolled past Filipino domestic helpers laughing on picnic mats; Caucasian expats jogged by corners where interracial couples sat huddled on a date. It was the sight of a surprising and reassuring co-existence, a tableau of the ensemble cast that makes up the Singapore of today. The Botanic Gardens has become a safe space for people from different backgrounds, whose lives, in any other part of Singapore, might not intersect at all.

Established in 1859 by Sir Stamford Raffles, the Singapore Botanic Gardens was purposed for researching native fauna, and more economically, to cultivate crops for the colonial empire. Henry Ridley, its first director, established rubber harvesting there; his discoveries would grow into the formation of Malaya’s rubber industry, which, by the early 20th century, was producing half the world’s source of rubber.

It was only in 1967 that the late Mr. Lee Kuan Yew, in starting the Garden City campaign, spearheaded efforts to turn the Botanic Gardens into a place of leisure. This was one component of his ambitious plan to prioritise greenery in housing estates, roadsides, and almost every category of public space. Like many of his ambitions, this was a tremendous success. As of 2014, there were 1.4 million trees planted in Singapore. Biophilia, referring to the idea that humans have an affiliation with nature, continues to shape the country today. This mark on Singapore’s geography remains one of the legacies that Mr Lee had left behind.

Over the course of several Sundays, I returned to find the garden teeming with people. Near the Eco-Lake, next to lush bougainvillea bushes, Jahcille, Tina, and Claire, three Filipina domestic helpers were, on their weekly day off. The sounds of their laughter and blaring music formed a garden soundtrack. In leafy corners, Bangladeshi-Filipino couples embraced, during what may be their only time in the week to see each other. And others, exhausted by the week, or perhaps drained by the relentless heat, napped in the shade.

For domestic helpers, the Gardens provides them with the “space to do whatever they want, to relax, to unwind,” an occurrence made even more necessary if one considers the six days a week they spend in an employer’s home, without the luxury of full privacy. It is an overspill from “Little Manila,” the ethnic enclave that Lucky Plaza is known as. Before ION Orchard was built on it, the land next to Lucky Plaza was a grassy hill where Filipina domestic workers would picnic. With that piece of land gone, Filipina domestic workers have had to search for other gathering spots due to the surge in the number of migrant labourers over the last three decades—resulting in a need for more free and accessible public spaces for leisure, especially on Sundays.

Scholar David Harvey had expanded upon Henri Lefebvre’s idea of the right to the city when he defined it as possessing an individual’s right and ability to change the city, and shape the processes of urbanisation. Through observing the growth of the migrant workers community in the Botanic Gardens, I witnessed the push and pull between individuals and the state, as they seek to claim a safe space for themselves, inevitably changing the landscape around us.

A long-haired girl sat patiently at the foot of a colossal, spindly tree, while her companion took portraits with her camera. Shuyi and Shuyao are friends from China, studying in a local polytechnic. They came to explore their photography hobby, although both their tastes differ from each other substantially: Shuyi enjoys taking people’s portraits, while Shuyao prefers taking pictures of nature and the environment. The plants in the Gardens, Shuyao said, smiling, were so different from northern China, where she grew up.

Much of the Gardens’ botanical diversity and layout are due to Lawrence Niven, who was appointed manager in 1860. In designing the Gardens, he had introduced an informal English Landscape Movement style of gardening, characterised by curves, irregular shapes, and a sense of looseness. The style also emphasised an openness to the surrounding landscape, creating an idyllic pastoral aesthetic in the midst of a tropical climate.

The Botanic Gardens was so prized that during the Japanese Occupation, Japanese botanists moved to Singapore to take over its maintenance. Professor Hidezo Tanakadate, who was in charge, gained permission to allow former senior staff members Richard Eric Holttum and Eldred John Henry Corner to continue their work during the day, before returning to Changi Prison in the evenings, as prisoners of war. Despite witnessing the brutality of violence around it, the Gardens itself was shielded from the ravages of war.

A recently recognised UNESCO World Heritage Site, the Botanic Gardens continues to bear witness to an evolving Singaporean society. A few years ago, an MRT station located at the northwestern corner of the Gardens opened for service, which no longer restricted regular visitorship to mainly residents living in the expensive private properties nearby or niche horticultural enthusiasts.

With easy access, the juxtaposition between communities congregating and individuals seeking solitude in the arms of nature can be seen throughout the Gardens. Silviana, who moved to Singapore from France, found the Gardens “different from the rest of the city.” It is a breather”, she said, from the hectic job she holds during the weekdays.

This sentiment has been written about time and time again. 19th century American essayist Henry David Thoreau looked to nature precisely to seek this solitude, in order to “face the essential facts of life.” Published in 1854, Walden was a record of his two years spent living in a rural cabin near Concord, Massachusetts. In the book, he famously emphasised humans’ need for the “tonic of wildness.” The Botanic Gardens, while not being nearly close to being wild, is perhaps, a good enough substitute.

Zul, a local university student, frequents the Gardens to “escape from his house.” Seated by the edge of Symphony Lake, he silently sketched the stage, where evening concerts are sometimes held. “I think it is really nice that people from all backgrounds come here. You’d think that there’d be a lot of expats and people with higher economic status, but it’s nice to see [the migrant workers] as people enjoying themselves. After all, they’re people, too. They aren’t just here to work for us,” he said.

In Theorizing the Southeast Asian City as Text, Shirlena Huang and T.C. Chang described the urban landscape as a palimpsest which “acknowledges that places are continually inscribed with cultural meanings and compels us to examine a landscape not only for what the landscape does contain but also for what it conceals, hence requiring that we consider both the overt and hidden aspects of the politics of landscape change.”

I am reminded by how the Singapore Botanic Gardens has changed alongside the country, reflecting our collective need to connect, and disconnect in our downtime. More importantly, it is a space for everyone, regardless of background, to make a place of their own.