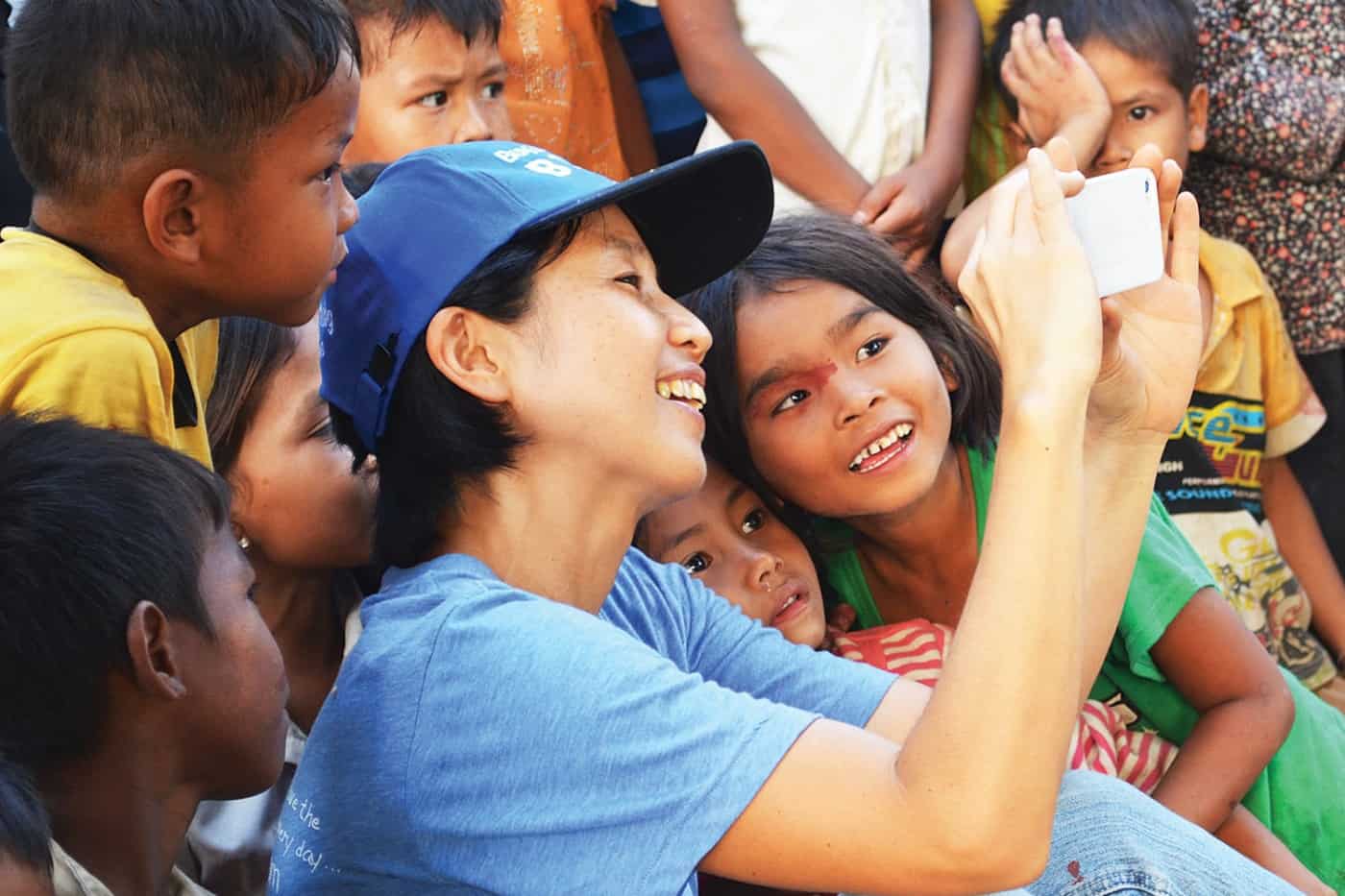 Creating a world full of giving

When you are running an organisation with a very unique mission, or a company with a social impact, you often get asked questions like: “How did you get started?”, “What has been the biggest mistake or challenge you experienced?”, “Were you afraid of failure?”

When I started my first business in 2001, I was a brand new mum with a three-month-old baby. It was probably the craziest time to start a business, but I did, because it was precisely the right time for me.

I left my home in Japan at the age of twenty because I wanted to travel the world. I was a young and very shy backpacker who spoke little English and was travelling alone. I was afraid at first, but my journey was full of wonderment. Everywhere I went, people helped me when I needed help. Without having the correct words to express my thoughts, I managed to really connect with others without speaking the same language. I realised that the world was not the scary place I had imagined it to be. I was also exposed to and confronted by many issues such as environmental disasters, extreme poverty, children living on the streets, etc.

When I became a mum and felt the profound love I had for my own baby daughter, I realised that those children on the streets could—by a simple stroke of fate—just have easily been my daughter. I had to do something about the issues I saw first-hand, which led to me wanting to help protect and nurture children who did not have parents. And to leave the world in a better state for my own children too.

Ignorance was truly a bliss

I was lucky not to know too much about the real challenges faced by business owners and entrepreneurs. If I had overthought it, I probably wouldn’t have started a business. So every time I faced a challenge, I simply found a way to deal with it. I just kept moving forward (and backward) one step at a time with my own limited knowledge and capacity.

One challenge that I fondly remember and have a good laugh over till this day is: I used to run a food business and was heavily pregnant when we moved to live in the attic of our commercial kitchen, among cardboard boxes. Yes, we were sort of homeless. The business was struggling and I could not afford to go to the hospital or have a midwife, while paying rent. Eventually, I gave birth to my son in the industrial sink by myself.

Fortunately, everything worked out in the end. My business started to grow and we managed to move out of the kitchen a few months later. Our landlord became a great supporter of our business as well, after I felt guilty and confessed to him what we had done without his permission. Even at that time, I still believed that I was far better off than many of the people that I had met while backpacking. I found joy in what I was doing, and felt compelled to keep at it. I was optimistic. (If you are interested in how it all began, you can learn more about it here.)

Often, having confidence or the right experience helps. We can make better decisions and avoid risks when we know more, but sometimes in life, not knowing what to do also helps. You find innovative solutions to your problems. No matter what, I kept going because I knew why I was doing what I was doing.

My food business was five years old when I realised that I was still too busy to make a difference based on what I’d first envisioned. I had started my business to help street children, but I was working 16 hours a day and barely making any profit, even though the business had grown to distribute packaged food products to more than 150 retail stores in Australia. Then, a very simple idea hit me. What if we gave a meal away for every meal we sold?

I discovered that we could give a meal to an underprivileged child for just 25 cents through an experienced NGO in India. The cost to give was far less than even the cost of packaging we were using, and that was the start of our ‘buy one give one’ idea—and how giving and caring became part of the ‘ingredients’ in our products.

Several months later, I had another epiphany. My idea could be applied to many other businesses. I imagined a world that was full of giving, so my family decided to move to Singapore to start a global giving initiative called B1G1, to help businesses give back.

Courage and the joy of giving

It has been 11 years since, and we are still here. Today, B1G1 works with more than 2,300 businesses and these businesses (while mostly small businesses) have created over 145 million impacts to date.

These impacts include 36,730 of trees planted, 98,786,751 days of access to life-saving clean water, 16,037 books given to children, 23,039 of income-generation training sessions provided and many, many more. We describe these magic numbers as ‘smiles being created’. Thus far, we’ve created 145 million smiles and counting.

There have been many challenges, as well as ups and downs in our journey, but courage is one of our team’s core values. Our team members are encouraged to be daring, and the risks we take are worthwhile because we see and experience the ‘joy of giving’ each and every day. We are so fortunate to be working on something that is truly meaningful, and connecting with so many incredible people around the world.

Whether you are an entrepreneur or not, I am sure you also have your own story of courage. Perhaps, you feel scared, discouraged, fearful and in doubt at times, but that is just a part of life we all experience. No one is absolutely certain about what will happen in the future.

Steve Jobs once said, “You cannot connect the dots looking forward. You can only connect them looking back.” I guess everything makes sense when we look back on our own endeavours, but believing that it will all work out in the end is a useful way of dealing with the challenges and obstacles in front of us.

Each one of us can make this world a better place, and I hope you will share your own special gift with courage.

Masami Sato is a presenter at the upcoming Campus Party Singapore, which is happening on 6 – 8 July at Singapore EXPO Hall 7.