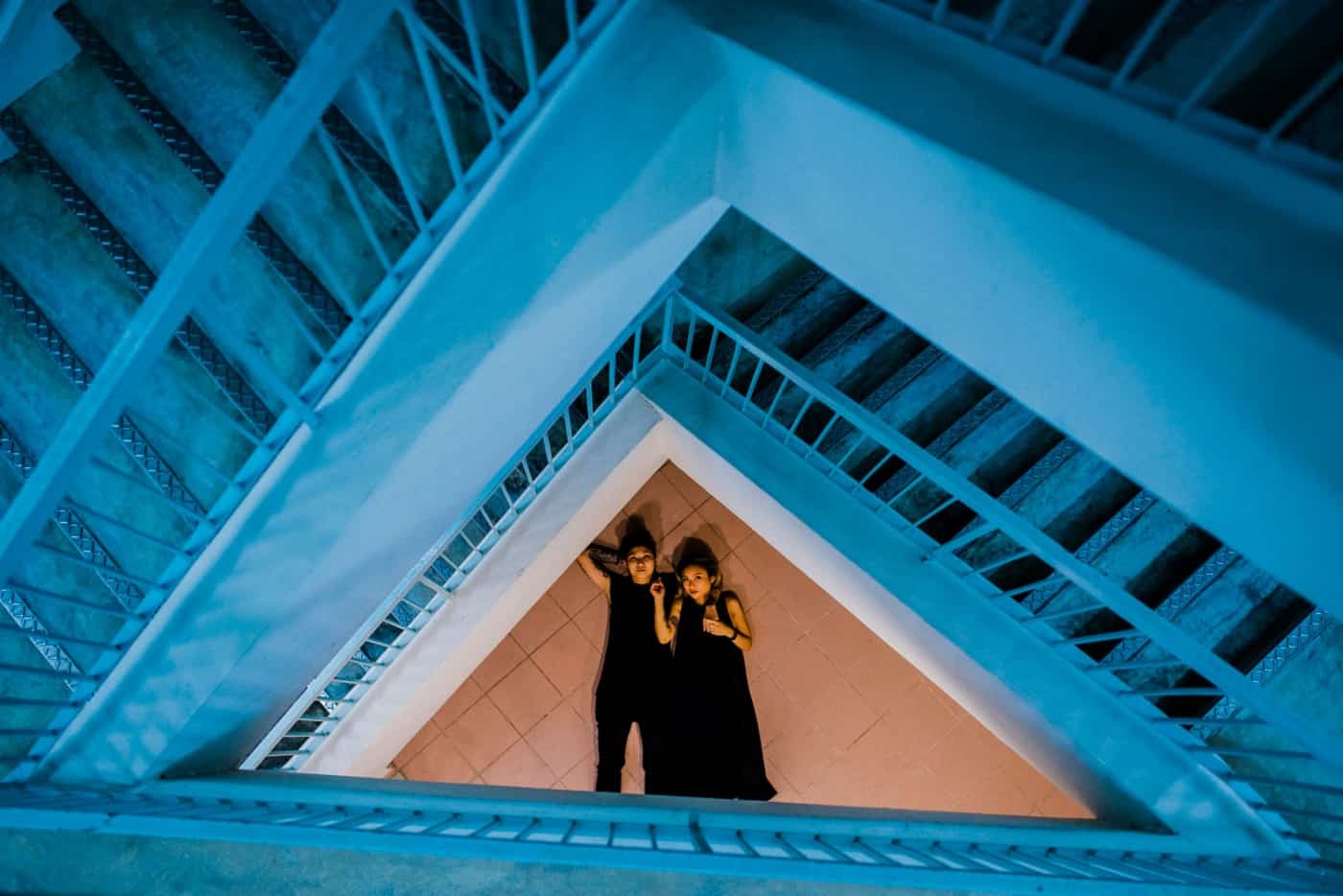 In this series, we explore the different forms and facets of love that exist in this world. Some may be more straightforward, while others can’t be easily defined. But love holds no boundaries and the celebration of the human heart should be captured with richness, colour and dimension.

How long have you been dating?

SAMANTHA: But we started hanging out exactly a year ago.

What was your first impression of each other?

SAMANTHA: She was pretty.

EUPHORIA: Actually, I first met Sam 5 years ago, when I used to work for Two Queens. We would throw lesbian parties every week, and I asked her if she wanted to buy tickets to the White Party. Anyway, I thought that she was cute.

SAMANTHA: I don’t think that we had a proper first date. It was kinda casual. Since we are both into gaming, I invited her to come over to my place to play Outlast… and get drunk at the same time.

How about the first kiss?

SAMANTHA: That’s terrible! It was quite sudden, and not romantic at all. It happened in my room. When we first started to hang out, I did not have the intention of getting into a relationship. We simply enjoyed each other’s company and had good chemistry.

Between the both of you, who do you think is more attractive?

EUPHORIA: I think with makeup, me? [laughs] But on a normal, dressed-down day, I think Sam is more attractive because she has a lot of charisma.

Favourite feature about each other?

EUPHORIA: Her eyes and her mole.

SAMANTHA: I have never thought about that. Ummm, maybe the back of her neck? To me, that’s a very vulnerable part and whenever I see it, I feel compelled to protect and take care of her.

What is the most romantic thing that you’ve done?

SAMANTHA: I’m the least romantic person. We don’t celebrate Valentine’s Day. But I express my love through the small little things.

EUPHORIA: In general, Sam is quite thoughtful. For example, in a social situation, she helps me get a drink whenever I feel awkward or if I’m not in the right state of mind. That being said, I do remember last Christmas when I brought Sam to meet my parents. It was a very big step for me because after my last break up, I decided to be more careful about introducing my new girlfriend to my parents. My mum made a joke about us getting married in 4 years, and I thought that Sam would freak out. But she didn’t, and the way she handled the situation was very romantic to me.

SAMANTHA: I could see myself getting married to her. Euphoria’s parents are so accepting and loving, and it was the first time that I’ve met such an open family. Gesture-wise, I gave her a house key so that she can let herself in [laughs]. I really downplayed the moment.

What’s something you have never told each other?

SAMANTHA: I tell her everything.

EUPHORIA: Same here. In fact, I tell her things all the time! Even when she is not listening. [laughs]

What is one quality you like the most about each other?

SAMANTHA: I think we complement each other very well. If I get flustered or obsessive over something, Euphoria is able to look at the situation objectively and give me sound advice, which helps me to refocus. That’s what I like the most about her because I can be very emotional and sensitive.

EUPHORIA: Sam is a very kind person. When I first met her, it didn’t occur to me that there were kind people in this world who are genuinely good-natured. After spending more time together, I think I have grown to be a kinder and better person too. Previously, when someone tells me their problems, I will use logic to solve it. But ever since being around Sam, I consciously make an effort to empathise with the person and put myself in their shoes.

Name three things the both of you have in common.

EUPHORIA: We eat a lot of junk food and like our own personal space too—oh my god, that’s super important. After coming back from a long day at work, it’s nice to know that we can just do our own stuff. People sometimes say they are not needy like that, but they actually are. With Sam, she understands that I need my space or if I’m in a mood where I can’t talk to anyone right now.

SAMANTHA: I don’t get offended at all. In fact, I am happy that I can leave her be. In my past relationships, I was always the one who had to give so much attention to the other person and if I couldn’t “be there”, I would feel very guilty about it. During the initial stage of our relationship, I felt a little disorientated because I couldn’t believe that I could just be myself. It’s so comforting to have that with someone right now.

What do your friends and family think of your relationship?

SAMANTHA: My parents know that I’m gay, but when it comes to relationships, I don’t talk to them about it. They kinda know who I am dating though. My mum has seen Euphoria around a lot and she always gives her a hug. My mum hardly hugs anyone! So I think she knows that Euphoria is my girlfriend. My housemates also love Euphoria, and that was so important to me, initially. All my friends have never seen me this happy before.

EUPHORIA: My parents have already given Sam the stamp of approval, and my friends love her.

Who said “I love you” first?

SAMANTHA: I did. But I knew that she fell for me first.

EUPHORIA: Ha ha… there is no such evidence.

Has your perception of love changed after the both of you got together?

SAMANTHA: I didn’t think it would be that easy. In the lesbian world, when it comes to being in a relationship, it can get very emotional and sometimes you think that in order to show your love, you have to be really extreme—like there needs to be some sort of struggle or fight to be together. But relationships shouldn’t be that difficult.

EUPHORIA: My past relationships were toxic. And at the beginning of our relationship, it was just so easy that I started to question if there was something wrong. We click and make compromises without even fighting.

SAMANTHA: When we fight or have disagreements, we are able to sort it out very quickly.

EUPHORIA: Yeah… in my last relationship, I fought with my ex for two days.

SAMANTHA: In the past, whenever we faced an issue, Euphoria’s first reaction would be to run away because she didn’t know how to fix it. But I insisted that she doesn’t have to, and that we can fix any issues or problems together.

How would you define “love” right now?

EUPHORIA: The person that you love makes you a better person. I never had that with anyone until I met Sam.

SAMANTHA: Love is chemical, but what happens after it wears off? I think love makes you want to be the best version of yourself, and with the right partner, it can happen. I’ve never ever felt like she has held me back and she’s been so supportive of whatever I do.

What do you argue about the most?

SAMANTHA: Her drinking habits. I can’t deal with drunk people—that’s my weakness.

EUPHORIA: I’m not drunk all the time! You’re making me sound like an alcoholic!

SAMANTHA: Here’s the thing, Euphoria doesn’t expect me to take care of her when she is drunk. But there was this one time when I couldn’t take it, because I still felt like I had to take care of her. I always feel the need to, even if she says that she is perfectly capable on her own. That was why we fought.

EUPHORIA: Sam always feels like she has to do something, even if I tell her that I can do it myself.

SAMANTHA: Anyway, we argue less now since she has cut down on her drinking.

In your relationship, what have you learned that frightens you?

EUPHORIA: What frightened me for a while was that we didn’t fight. You know when you don’t fight, you can’t gauge a person’s tolerance. What if we one day we get into a fight and Sam decides to walk out on me because she doesn’t want to be with me anymore?

SAMANTHA: I went to see an astrologer (I believe in such stuff), and he predicted that in the near future, it is going to be a bit difficult for her. So, I’m worried that something might happen to her and it’s always at the back of my mind. [tears up].

At what times have the both of you felt happiest together?

SAMANTHA: When we are at home, watching TV.

EUPHORIA: Or when we are in bed… our ‘pillow talk’ is my favourite.

SAMANTHA: Right before we go to sleep.

EUPHORIA: After saying good night, we will be quiet for 3 minutes before one of us goes, “So, how was your day?” [laughs] But the funny thing is that we’ve already talked about it! I guess we like chatting about anything; sometimes it can be deep or just random gossip.

Do you want to have kids one day?

SAMANTHA: We have talked about this before. Ideally, I don’t—but she does.

SAMANTHA: I would prefer to adopt. Honestly, I’m more afraid of committing to such a big responsibility because being a freelancer for the past couple years hasn’t given me a lot of financial stability. I want to make sure that I’m in a good place before having kids.

Dining
From the Couch to the World in One Bite
Property
The Future of Real Estate Investment: 2017 and Beyond
Insights
Supercharge Your Brain With These Hacks
Trendsetters
Ian Alexander Ang
Insights
A Suicidal Time for the Markets